My husband dumped me for a very young, very beautiful woman. Then his new love dumped him -- for another woman. 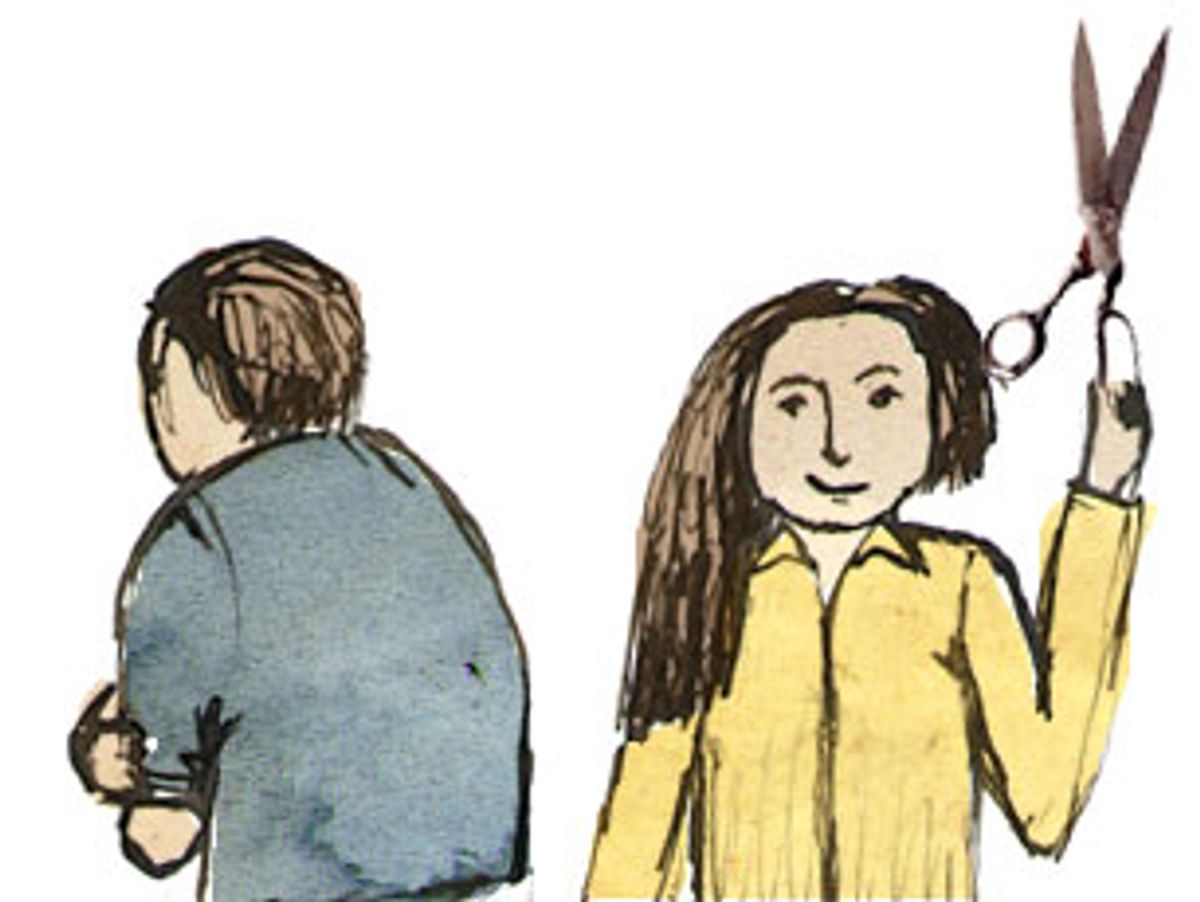 My ex-husband took pictures of our divorce. A guard at the courthouse finally made him put his camera away just as we went before the judge. But until then he kept clicking away. He photographed me as I walked up the courthouse steps, as I crumpled some of my skirt in my nervous hands and as I looked away from him, out the window. It had been like that throughout our life together, from our very first date: No experience seems real to him until after he has developed the film.

I was ready for closure, but I was not prepared for what happens in court. When it came time to see the judge, he made us raise our right hands and swear on the Bible that we had done all we could to salvage the marriage. To every question we each said, "I do" -- just as we had on our wedding day -- until the judge pronounced us divorced. Earlier that morning, my daughter, Ali, then 10, had asked, "Is it like a wedding, except you each say 'I don't'?"

The echo of our original vows put a sheen of melancholy over my anger. I think this is why I agreed to our having lunch together afterward at a diner just like the one we had gone to in New York after our simple wedding in 1969. I had worn a white minidress, we read from "The Prophet" and then we were married. On the day of our divorce, as on our wedding day, we both ordered eggs over easy with bacon. We smeared grape jelly on white toast. After a while I gathered the courage to ask the question that had been on my mind for a few months. I wanted to know why she had left him. How could a set of feelings strong enough to cause the breakup of a family vanish just like that?

With a little quiver in his voice, he told me that she had fallen in love with another woman. It wasn't just some thing she was going through. She had been a lesbian for years, she now knew. A lesbian! He still found it hard to believe. Impossible really. He had lost me, his daughter, now her. He sighed and let his lip tremble.

At that moment, I was feeling a little sad for him. So I stayed and let him talk. He told me how she had cut her hair to her chin. He had liked it well enough, so just to show him that his liking it was totally beside the point, she went out the very next day and cut it to her ears. Then she shaved it above her ears. The most amazing thing of all was that she still looked beautiful -- but she was lost to him forever. At that point I did not hesitate to tell him that he'd get over it.

We didn't linger over coffee. I couldn't wait to get back home so I could start calling my friends. My story had a perfect ending.

"He fell in love with a very beautiful, very young woman who spent every weekend in the house where I once lived. She used all my dishes and towels, and once, when I had to drop off Ali, I went into the bathroom, and her diaphragm was right there on the edge of the sink."

"Actually, she only used my things for a couple of years. Before the fire."

"Yes. Sometimes I think I caused it. I think if a person focuses that much hate on one location, the feelings vibrate, create their own heat. Or maybe I am a witch. In any case, there was a fire, and nobody got hurt, but almost all the furniture and household stuff was destroyed, and after that I never had to picture them together in my space."

"Are they still together?"

"Oh, no." I pause a little and let the smile creep into my voice. "She discovered she was gay and left him."

Women laugh. They howl. They are delighted by this story. Men tend to look pained.

"And that's not all," I add while I still have the person's attention. "Afterward he was so sad that he went out for a drive so he could visit all their favorite places and say goodbye. Then on the way home he totaled his car. They had matching cars, you know. She may still have hers. Oh there is a God."

For the next few years, I never missed an opportunity to tell that story. Even today, I still jump right in when I get the chance. But ever since Ali came out, I feel a little guilty when I do it. I think I should stop and try to figure out why the story is so satisfying. Why does losing a woman to another woman seem like the grandest indignity a man can suffer? Bad in bed, was he? Turned her off men completely, eh?

This implies that men have the power to make women gay. And I don't believe it. If that were true, Ali and all the other gay women I know would be deprived of an identity that stands alone, does not require trauma, is not yet another response to men. Women loving women is not about men at all. But that still leaves me wondering: What is it about?

When Ali first came out, I wondered if I could have done something to make her gay. She was born with a dislocated hip and she needed X-rays in her first months of life. What if something happened to her tiny ovaries back then? Did I ask the doctors enough questions? Ali came slowly to the belief that Roy, my second husband, and I would make it. When we told her we were getting married (she was 12), she neatly tucked the instep of one foot over the arch of the other, thrust out her hip and said, "Oh, really? And what makes you think it can work this time when you failed with Daddy?" Could that overwhelming sense of failure have cut off her hopes for a happy marriage? No, it didn't -- she absolutely hopes to find lasting love with a woman. If she had given up on love, she'd give it up altogether.

Time went by and I stopped looking for the causes of Ali's sexuality. I stopped needing to find them as I grew increasingly comfortable, as I saw how little difference it made.I have come to think that Ali's feeling about men as sex partners is like my relationship to peanut butter: I have tried different kinds and haven't liked any of them.

I do not associate peanut butter with any bad memories -- nobody ever beat me while forcing it down my throat. I sometimes wish I could be satisfied at lunch by a simple peanut butter and jelly sandwich. But I can't. Although I have nothing against those who scoop the stuff right out of the jar and lick it off their fingers, people look at me strangely when I tell them I don't like it. It's almost un-American. On long-ago Sunday nights, my whole family would all watch "Bonanza" and have snacks at our TV tables. My brothers gobbled peanut butter and Ritz crackers while my dad and I speared chunks of pickled herring from a small jar. There is no explanation for this, and there should be no judgment, either. It just is -- as is Ali.

But on that day of my divorce, neither her dad nor I knew she was gay. She was still a kid at home wondering about I do's and I don'ts while I sat in a diner listening to her dad's sad story. He had placed his camera near his plate like another table utensil. He could raise his fork, his coffee cup or that camera at any time. I wanted to grab it and take a picture of his ravaged face after he finished telling me all about his lost love and her haircut. Ali still had shoulder-length hair then. I wonder what he thought when she cut it?

Have I mentioned that Ali is beautiful? Today her cropped hair shows off her good bones and gorgeous eyes. Her dad took hundreds of pictures of her as a baby and a toddler. I don't know if he has taken any pictures recently, but he used miles of film on those weekends when Ali and the woman who later discovered she was gay made kites and sand castles and baked cookies together. He never offered any of those prints to me.

I couldn't have looked at them then. I could now.

If she had married Ali's dad, I would have found a way to make peace, because Ali loved her. Like the fine mother she may someday become, this young woman wrote poems and read stories and wove Ali's hair into perfect French braids. To this day Ali keeps the letter this young woman wrote to explain why they wouldn't see each other anymore. She was very loving and careful in her language, and so the letter merely managed to say goodbye. Ali read it and reread it until the folds wore thin. What's amazing to me now is that the letter was written when this woman was just 22, younger than Ali is now.

The woman is 34 now. Ali located her a while ago and called. Sometimes I want to do the same. I'd like to say, "I never should have hated you. I'm so sorry. How is your life? Do you have a partner? What about children? You really ought to have children. Were you surprised when Ali told you she was gay? She cut her hair, too. It looks great. And by the way, what did your mother say when you came out?"