The pope's vague act of contrition does nothing to address the Vatican's pro-war policies. 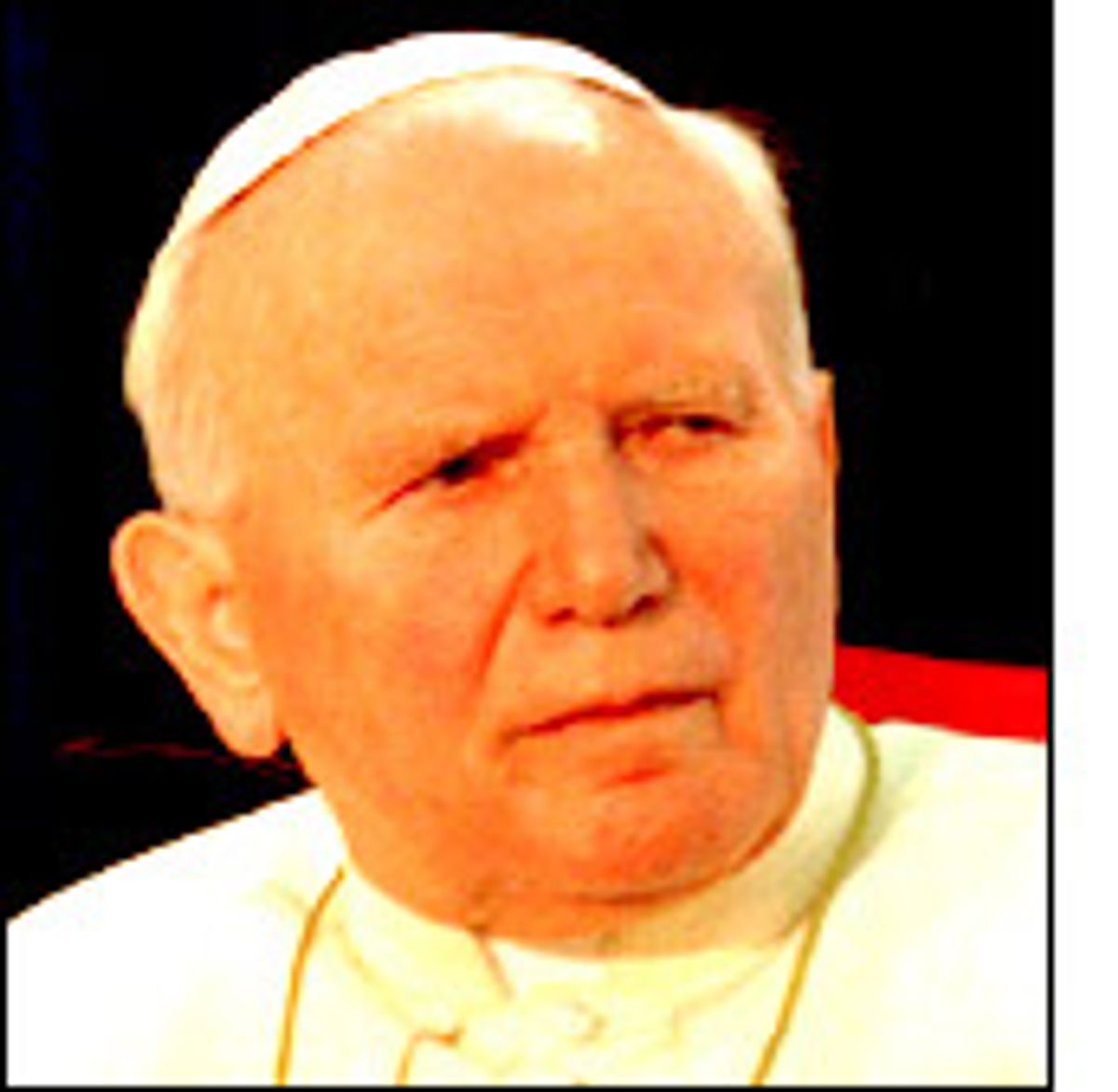 Adult Roman Catholics with sharp
memories can recall priests and nuns of
their childhoods offering advice on
confessing sins -- "going into the box,"
as the phrase went. Be specific, be
contrite and promise to sin no more.

Of those three standards for true
repentance, Pope John Paul II, in his
March 12 plea for divine forgiveness for
sins committed by his church in the past
2,000 years, met only one. He was
contrite.

On specific sins, the pope offered the
incense of smoky generalities. Not
included in John Paul's confession were
the names of earlier sinner popes, most
now remembered only by hagiographers, or
Catholicism's public crimes that were
sanctioned by churchmen or doctrine.
Specifics were also absent from the
19,000 word document "Memory and
Reconciliation: the Church and the
Faults of the Past" that accompanied the
papal self-pardoning. "Past faults" and
"scandals of the past" cover a multitude
of undefined sins.

The pope's vagueness raises a question
-- not about past sins but about
possible current ones.

For what sins of today's church might a
pope in the year 4000 -- perhaps John
Paul XXXIV -- be begging forgiveness?
What policies of today's Vatican will be
weepingly regretted 10 or 20 centuries
from now?

Start with violence. At no time in John
Paul's papacy has he renounced the
church's just-war theory. He has never
wavered from Catholic teaching that
violence can be used to repel violence.

With some 35 wars or conflicts currently
bloodying the Earth, and with as many as
40,000 deaths a month -- mostly the poor
killing the poor with weapons made in
rich nations -- where is any statement
by the pope calling on Catholics to
refuse to cooperate in any way with
military violence? It is accepted as
normal that Catholic colleges in the
United States host ROTC programs, that
Catholic priests serve as military
chaplains, that Catholics pay federal
taxes that guarantee the Department of
Defense $700 million a day, that
Catholics work for weapons companies,
that Catholic pilots bomb people in Iraq
or Kosovo.

Catholics who reject church teaching on
the just war can expect no support from
John Paul. In the early 1980s,
Archbishop Raymond Hunthausen of Seattle
refused to pay that portion of his
federal income taxes -- about 50 percent
-- that went to the Pentagon. He
received no personal or moral support
from the Vatican.

The opposite message came through. Near
the time of the Hunthausen war tax
revolt -- which philosophically aligned
him with many members of the three
traditional peace churches, the
Mennonites, Quakers and Church of the
Brethren -- John Paul was appointing
John O'Connor the archbishop of New York
and, soon after, consecrating him a
cardinal. O'Connor had been a Navy
chaplain, rising to the rank of rear
admiral, during the Vietnam War.
Hawkish, he wrote a 1968 book stoutly
supporting U.S. military policies in
Southeast Asia. At the time of
O'Connor's appointment to the nation's
richest diocese, the pope was widely
reported to have said, "I want a man
just like me in New York."

During World War II, Catholic bishops in
both France and Germany were claiming
that their side was waging a just war.
In June 1982, the pope visited
Argentina, a nation then at war with
Britain. The Argentine clergy supported
their government's warmaking. On
arriving at the Buenos Aires airport,
they and the junta's generals piously
surrounded John Paul, with banners in
the background saying "Holy Father,
bless our just war" and "May God defend
our cause because we defend His."

Philip Berrigan is caged in the
Baltimore County Detention Center
awaiting a trial scheduled to begin
Monday on counts of sabotage, malicious
destruction of property, conspiracy and
trespass. On Dec. 19, he and three
other pacifists attempted to disarm two
A-10 Thunderbolt warplanes at the
Warfield Air National Guard facility in
Essex, Md. This type of plane was the
main delivery system for deadly depleted
uranium in Iraq and the former
Yugoslavia.

Berrigan, his wife Elizabeth McAlister,
his brother Rev. Daniel Berrigan and a
full cellblock of other pacifists have
been repeatedly imprisoned for their
conscientious objection to U.S.
militarism. They see Christianity as a
religion of nonviolence, based on the
love of enemies and resistance to the
power of Caesar and pharaohs. One
possible reason for John Paul's lack of
support for these members of his flock
is their refusal to support church
leadership.

In his 1996 book "Fighting the Lamb's
War: Skirmishes With the American
Empire," Berrigan writes that the church
"is even more conservative, perhaps,
than our government. Not conservative in
the sense of 'conserving' the Gospel,
but in maintaining useless rituals and
policies that are designed to protect,
and perpetuate, the institution." He
continues, "To guarantee this, control
of the clergy and Catholic laypeople is
essential."

What, then, might a more thorough
apology from the pontiff have sounded
like? "If the church wanted to come to
grips with the Gospel," Berrigan writes,
"it would have to give up its property
and its exemptions from the state, and
involve itself with resistance on a
major scale. It would have to resist the
violence against our poor, and stop
pretending that one political party is
more humane than the other."

Is this the bile of an
authority-loathing crank or the words of
a prophet calling power to
accountability? History supplies the
hint of an answer. We look back at
Francis of Assisi of the 13th century,
or Teresa of Avila of the 16th. Both
were blunt-speaking truth-tellers,
critical of church leaders. Francis
joined the church's Fourth Crusade but
after seeing the killing and gore of the
first battle, deserted. He returned to
his hometown to serve poor people.

Once long dead, and their devoutness
more remembered than their dissidence,
both Francis and Teresa were canonized
saints.

The churchmen who gave little support to
Francis and Teresa must be forgiven,
their misdeeds surely included in the
general absolution given March 12 by
John Paul. Until a few more centuries'
worth of sins pile up and a future pope
calls for Forgiveness Round II, it's
only speculation as to whom the church is
sinning against today.