"T for Texas/T for Tennessee"

From "Waltz Across Texas" to "The Tennessee Waltz": Will Bush or Gore dance his way to the White House? 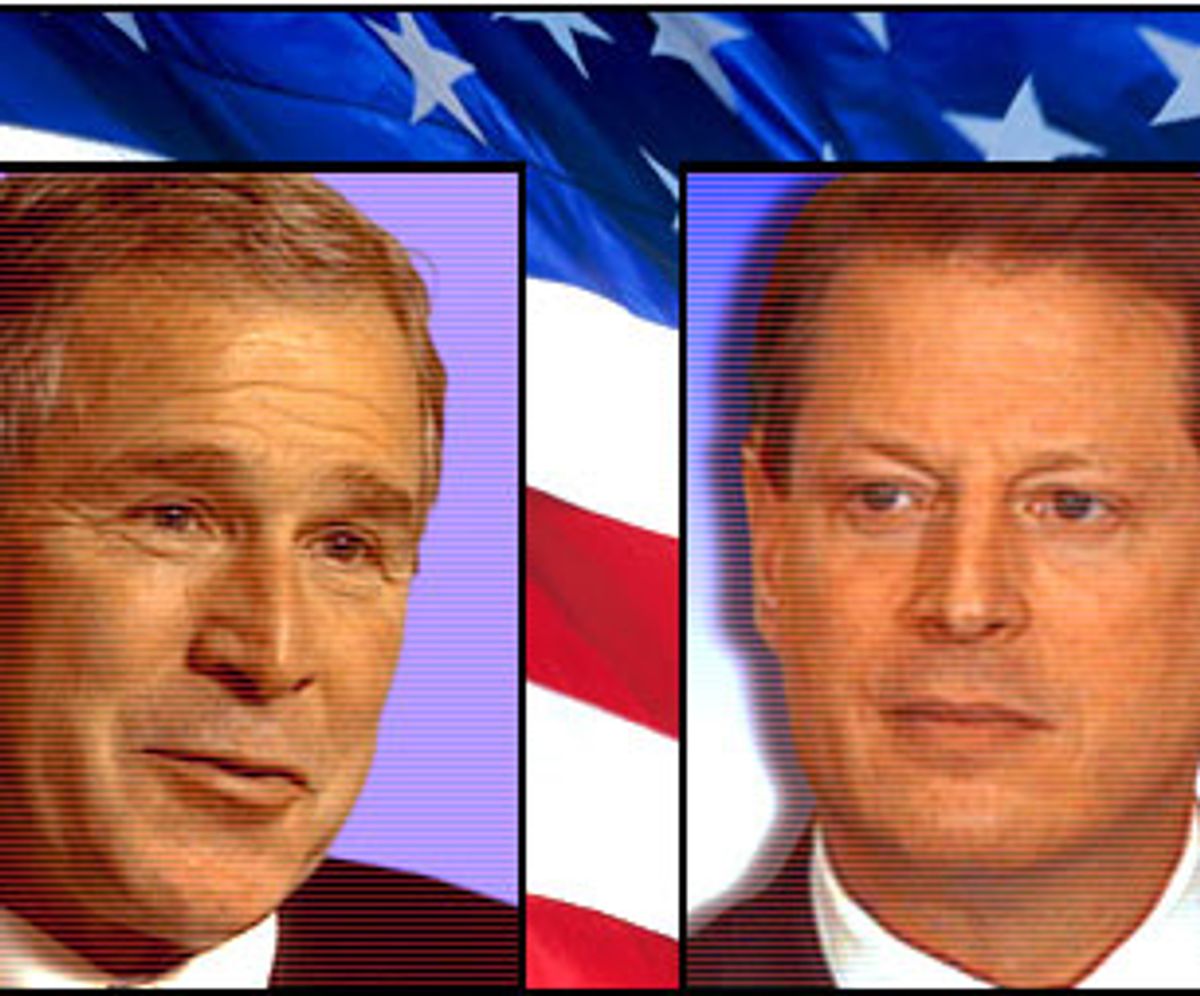 Walking home from a Super Tuesday party -- or whatever one calls a get-together with a bunch of people sitting around eating pizza and screaming at CNN -- I found myself humming Jimmie Rodgers' "Blue Yodel." Once it became official that Gov. George W. Bush of Texas and Vice President Al Gore of Tennessee were to be their parties' candidates in the presidential election come November, "Blue Yodel" was a natural choice. (You might know it by its first line: "T for Texas/T for Tennessee.") Of course, the song is sung from the point of view of a man who's off to buy a "pistol just as long as I'm tall" to shoot his sweetheart, and then a shotgun to kill the man who stole her, so it has more to do with the governor's affinity with the National Rifle Association than with the vice president's critique of the same, but still, it's a good, handy song and quite a relief. It's not like we had an Arkansas vs. Kansas theme to whistle last time around.

"Blue Yodel" was just the beginning. In the days since I cast my ballot in that primary, my head has been an overheated jukebox, flipping from one Texas or Tennessee tune to another, from Johnny Cash doing "Tennessee Stud" to Gene Autry's "Deep in the Heart of Texas," Marty Robbins' "El Paso" backed with the Louvin Brothers' cover of "Knoxville Girl" and Lyle Lovett's "That's Right (You're Not From Texas)" with a segue into Red Foley's "Tennessee Saturday Night." There are so many songs taking up so much mental energy, I'm kind of hoping the serial killer from Bruce Springsteen's "Nebraska" drives into my cerebral cortex and blows them all away; as he might put it, one of the meannesses in this world is the weird concentration of songs and singers in Texas and Tennessee.

In a political campaign, three kinds of songs resonate for the electorate. There are the songs the candidates and their staffs choose to fire up their rallies. For example, Gore has been blasting Bachman-Turner Overdrive's "You Ain't Seen Nothing Yet" and Shania Twain's "Rock This Country." (You'd think he was running for office in Canada.) Bureaucrat Bush has also been known to dabble in BTO, going with "Takin' Care of Business," though in my opinion he might want to look into a 1989 song by the Reivers of Austin, Texas, called "Star Telegram." It's one of the prettiest evocations of the lovely, lazy side of the American dream, a family unwinding in a Fort Worth back yard, sweet Kim Longacre singing "with Orange Crushes in my hand." Seems to me that's the kind of life politicians are supposed to be aiming to give us -- a nice hot Texas day barbecuing with Grandpa, where the worst problem to tackle is the gosh-darn chiggers. Because, as Pat Robertson said of Bush, he has done some very good things for Texas, things that would also work "in the United States."

Then there are the songs we sing to ourselves that portray candidates as we see them. When I watch Bush's face on television, the jukebox in my brain -- granted, not a particularly subtle machine -- drops the needle on Jimmie Dale Gilmore's "Dallas," in which "Dallas is a rich man with a death wish in his eyes." Either that or, if I'm in an apathetic mood, a lost Mel Tillis classic called "Coca Cola Cowboy." "You walked across my heart like it was Texas," Tillis crooned, "and you taught me how to say I just don't care." Then again, in his Super Tuesday victory speech, Bush proclaimed his support for the "generation next," so I guess he's a Pepsi man.

The Tennessee and Texas songs represent the more organic third category, the sort of no-brainers Paul Shaffer and the CBS Orchestra play to introduce the candidates as they walk on, assuming Bush's death wish includes ever going on "Letterman" again. I called one of my favorite Texans, country music historian Bill C. Malone, author of the forthcoming "Don't Get Above Your Raising: Country Music and the Southern Working Class," and asked him if he had any Texas-song advice for the governor. "To me, it would be 'Waltz Across Texas,' that Ernest Tubb song. It's just a real nice song," says Malone, adding, "I don't want to do anything that would help George W., though."

"Waltz Across Texas" is sweet, and certainly waltzing across Texas "with you in my arms" is a lot prettier of a picture than the one presented in its Democratic counterpart, "The Tennessee Waltz," a Tennessee state song that Gore has been known to croon. It was co-written by Pee Wee King, who coincidentally died on Super Tuesday as Gore was waltzing away with the delegates. (My favorite version, a sad lullaby by chanteuse Sally Timms, appears on the "Straight Outta Boone County" CD compilation from Chicago's Bloodshot Records.) Gore's covering "The Tennessee Waltz" seems ill-advised, considering the actual content of the song: A man takes his sweetheart to a dance and introduces her to his buddy, and the buddy steals her away, leaving the singer brokenhearted. For a Clinton administration official to sing a song about infidelity is like a two-step in the wrong direction.

But perhaps Gore sings "The Tennessee Waltz" not for its words but to capture a little of its crossover mojo. Malone says that the song is a landmark in American popular culture, the tune that made country music pop music. It was recorded several times by hillbilly groups in the late '40s, but made its mark in a 1950 version by Patti Page, which hit No. 1 on the pop charts. In the process the song made Acuff-Rose the No. 1 country-music publisher in America, Malone says, and created Nashville as we know it. As he writes in his book "Country Music U.S.A.," "'The Tennessee Waltz' alone must be given much of the credit for country music's commercial surge and the future integration of America's popular music forms." Malone calls it "just a pleasant, lackluster song." To paraphrase Bush, the song was a uniter, not a divider, so no wonder pleasant, if lackluster, Gore wants to associate himself with its breakthrough success.

Of course, wouldn't it be nice if Gore threw off the hokum of Nashville and went around singing my favorite song about his real hometown, Washington? He could do Parliament's "Chocolate City," looking voters and NRA lobbyists in the eye while shouting, "You don't need the bullet when you've got the ballet," and asking, "Are you up for the down stroke?"