What kind of kid would break up with his mother? Mine, apparently. 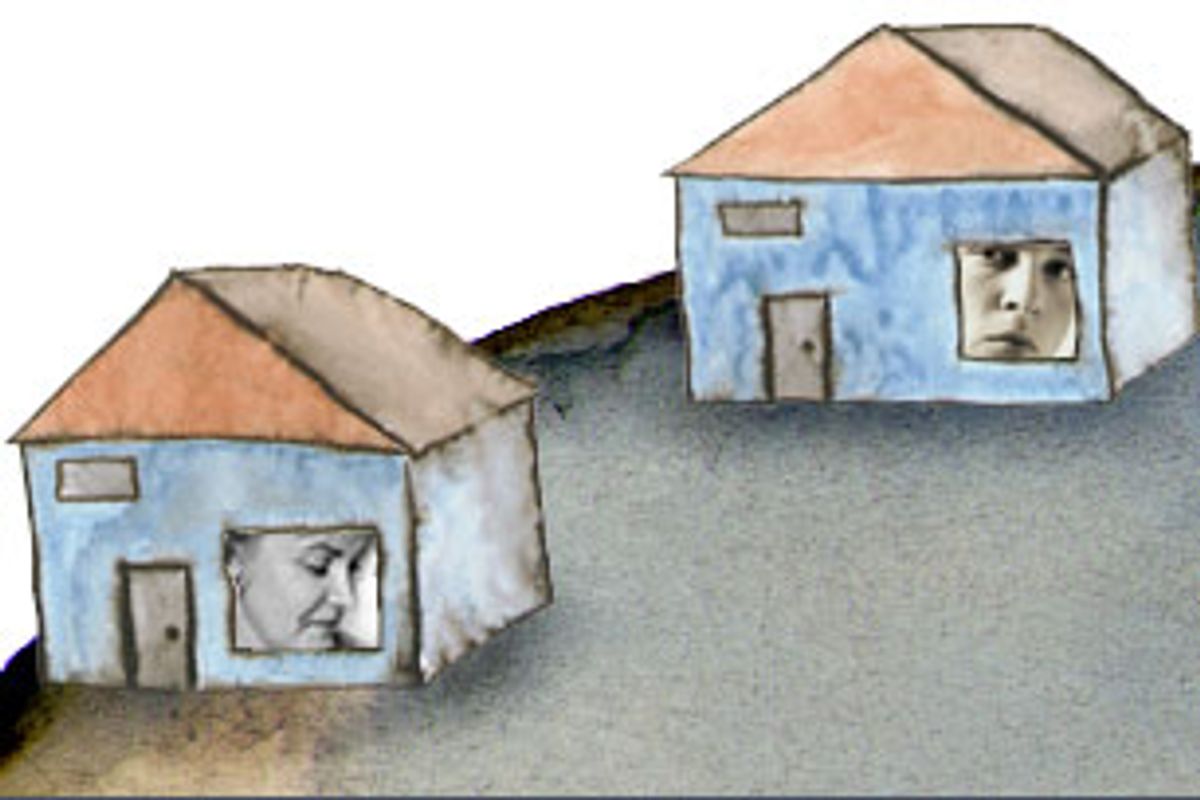 One of the first things I did after my son was born was to consult Ellen, my best friend from high school, who had moved to a fraying ranch house on the edge of Santa Fe, N.M., and fancied herself an astrologer. Given David's exact time and place of birth, she said, she could produce a full astrological chart that would offer up a map of his character and his future.

But I already knew what was in store for this scrawny, tufted chick: He would be a poet, a mystic and an intellectual. Anyone could see that this child was an extraordinary Old Soul come back to foster spiritual growth on earth and, under my tutelage, become the perfect partner for some very lucky woman.

Ellen didn't see it that way. "Wow, April 20 -- he's on the cusp of Aries and Taurus," she reported. "He's a headstrong little sucker; you'll have your hands full. And look at this -- Leo rising. Money and power, that's what will drive him. He'll be a whiz at business. "

Business? That's ridiculous, I decided. What did Ellen know, anyway, a woman who ate weird grains, such as amaranth, and sometimes slept in her clothes? My son would be contemplative, like me, not competitive. David went on to confirm my prescience with his first words, spoken remarkably young: "yogi," "Buddha" and "light." Of course, yogi was short for Yogi Bear, and Buddha turned out to be his best pronunciation of "bird," but I knew where he was coming from. "Welcome to the world, my gentle spirit," I whispered into the delicious folds of his baby neck.

My first hint that Gandhi Junior might have entrepreneurial leanings came when he was 8 and I brought him to work for my company's annual Kids' Day. While my co-workers' offspring swarmed the magician, my son headed off to a computer terminal, tapped out a message and whisked it through the copy machine. Within minutes, each of my colleagues had this flier on her desk:

Water and juice brought directly to your desk. 5 cents.

"What a piece of work he is," one of them remarked. "What's his sign, anyway?"

"Aries and Taurus," I told her, feeling silly. I like to think of my otherworldly interests as practical and grounded, not to be confused with anything as airy-fairy as the alignment of stars. "He's on the cusp."

"Oh wow, April 20," she said. "Same birthday as Hitler. Now here's a kid who knows his own mind. Is he terribly willful?"

"My boy?" I said. "Of course not. He's the sweetest, most emotionally available, easiest child on the planet." And so he was, spending as much time as he could curled up in my lap or, earlier, draped over my shoulder, until adolescence kicked in.

David matured early; he was shaving at 12. By that time, his father and I had gone through a bitter divorce and I'd been making skittish but steady progress in a new relationship for a few years. David and Don, my boyfriend, liked each other, but there were undercurrents of jealousy. "Tell him he can't park in the garage," David said. "That's Dad's spot. And he can't use the leaf blower, and I don't want his kids sleeping over in my old room."

Things got worse when Don moved in a year later. David took to his room for days at a time, surfacing, sullenly, only for meals. Having pored over all the "how to create a happy stepfamily" manuals, I knew enough to recognize his behavior as normal. Give the child enough room to express himself, the experts counseled, but not to call the shots.

"The only thing worse for a kid than having an Oedipal conflict," said my friend Pat, a therapist, "is winning it." So I listened empathically as David raged at me in hair-curling language, and quietly continued to build my life with Don, hopeful that David would come around in time.

Meanwhile, David was busy making his own way. At 13, he walked to the end of our street and got himself a job behind the counter at the local sporting goods store, of which I knew nothing until he casually asked me one day for "a ride to work." Completely uninterested in any of the thoughtful, enlightening activities I had in mind for him, he was obsessed with hockey, electronics and, as usual, commerce. "You know, Mom," he told me in a rare moment of communication, "sometimes I can't wait for high school to be over so I can start my business."

I let myself believe that he was settling into our new arrangement until the weekend Don and I decided to get married. "That's it, I'm outta here," David thundered, slamming the door when he heard the news and moving in with his father across town. I had chosen another man over him, David told his father, and that was that -- he was done with me.

"I hate you, you bitch," he spat over the telephone, both of us in tears. For nearly six months afterward he refused my calls.

I was stunned, frantic. My impulse was to storm over there and kidnap him, or get a court order to enforce the custody agreement, or just scream under his window until he realized how badly I was suffering. My friends counseled patience, but I wanted him here, safe, with me -- now. The worst part was, he was in pain and I couldn't help.

The other worst part was that I was horrified by his behavior. What kind of kid would break up with his mother, or say such terrible things? What had I wrought?

Every secret guilt I'd ever entertained rose up and swelled to Godzilla proportions: Wasn't I perpetually dreamy, preoccupied? Hadn't I missed all the signs that my first husband was on his way out the door? Hadn't I sometimes skipped over sentences in bedtime stories so David would get to sleep sooner? And what about those bottles of formula I'd fed him unwarmed because he didn't seem to mind?

Between furious, futile calls to David's father, I prayed for clarity. I stopped eating for days, and I stopped menstruating, for good. Nobody's advice felt right. One friend urged legal action and another, whose perspective I especially cherish, said I needed to protect myself from David's rage and get on with my own life. In my overwrought state I took this to mean that I should give up trying to make contact and write him off until he was older.

I tried to imagine it; I have a gift for imagining the worst. My son was dead to me and I would bear it. This grief would not kill me, I told myself; I had survived grief before. I simply could not allow him to get away with such hurtful behavior, or let him rip my heart to shreds.

But I couldn't write him off. That would be unthinkable, like trying to breathe without my nose. I had to give up this battle. I remembered the words of my friend Jane, a grade-school teacher who exerts perfect control over her classroom but extremely imperfect control over her 16-year-old son. "Believe me," she said, "if you're going to raise a teenager, you have to eat a lot of crow, over and over and over. You have to accept things you never dreamed of." I waved my little white flag in utter defeat, having never felt so helpless.

And that night when I couldn't sleep, slung over a recliner in the dark of the family room and staring out at the snow, I got it. David is impossibly himself, I realized in a flash, headstrong and mouthy. He can be cruel and rash, and he will have to learn to do better or live with the consequences. He is also intuitive and loving and achingly honest, and I love him back no matter what. No matter what.

David has a right to be furious, I now saw clearly, no matter how innocent my intentions. His life has been complicated in ways he didn't ask for and didn't deserve. Suddenly it all seemed so obvious that I had to laugh. Something hard in my stomach went warm and liquid, and it felt like a blessing.

And the blessing spilled over to me. If I was stuck with loving David as is, wasn't I also stuck, as is, with my own impossible self? Could I find enough compassion for us both? What choice did I have but to forgive these two imperfect creatures who were doing their best in an absurd situation? I had no choice, and in having no choice, I felt freed.

I felt freed, too, to let David's father be himself instead of a repentant ally who would rally David to my side. I couldn't change David's father any more than I could make him stay in love with me, any more than I could keep my best friend out of pointless relationships, or get Don to see the urgency of putting away his tools. I just had to shake my head in wonder.

It was just about the time of this inner shift that David started coming around, slowly and erratically. He started taking my phone calls. Here and there he'd agree to meet me for coffee. We would talk about everything under the sun except the big issues, which we carefully skirted. I wanted to keep the conversations on an even keel, to step outside my usual mommy role, stop trying to fix him and simply come to understand him. And what a treat it was. This saggy-jeaned, gangly boy-man with spiky black hair who sat across from me at Starbucks was quite the storyteller, wickedly funny and astute.

"Don's a good guy, really," David admitted one night over coffee. "I don't hate him, I like him. It's just the situation. Any guy who moved into the house with a bigger dick than mine would have been a problem for me." I tried not to choke on my biscotti, and kept listening.

He went on to tell me how he'd written an essay for civics class in praise of slavery, even though he considers the practice abhorrent. "Mr. Connors said we had to write an essay against slavery," David explained, "and I told him he shouldn't be telling us what to think, that we should draw our own conclusions. He said he would fail me if I wrote pro-slavery, but I did it anyway, to prove a point. So he gave me an F."

"Pity the woman who tries to raise you," I responded, and we both laughed. I was beginning to think, in my better moments, that I was the right person for the job. Somebody, after all, had taught this kid to speak his mind.

Our visits have progressed from coffee to dinners out, to the occasional overnight stay. One magic weekend I drove him up to visit a school in New England and we stayed in a homey hotel suite. Sprawled on a pullout sofa in front of a fire, we watched a video together, laughing at all the same lines, and he allowed his head to rest on my hip. I thought I'd explode from joy, and from how much I'd missed that normalcy.

I'd give anything to have David back home, to have the smell of Tommy Hilfiger cologne in his room. But spending too much time around me still makes him jumpy; I have to exercise my flabby patience and hope his bad feelings will soften in time. Meanwhile, I'll take what I can get, and it's almost enough.