Where the boys are

A new wave of films shows a fresh element in filmmaking: The sexualization of the male actor by the female director. 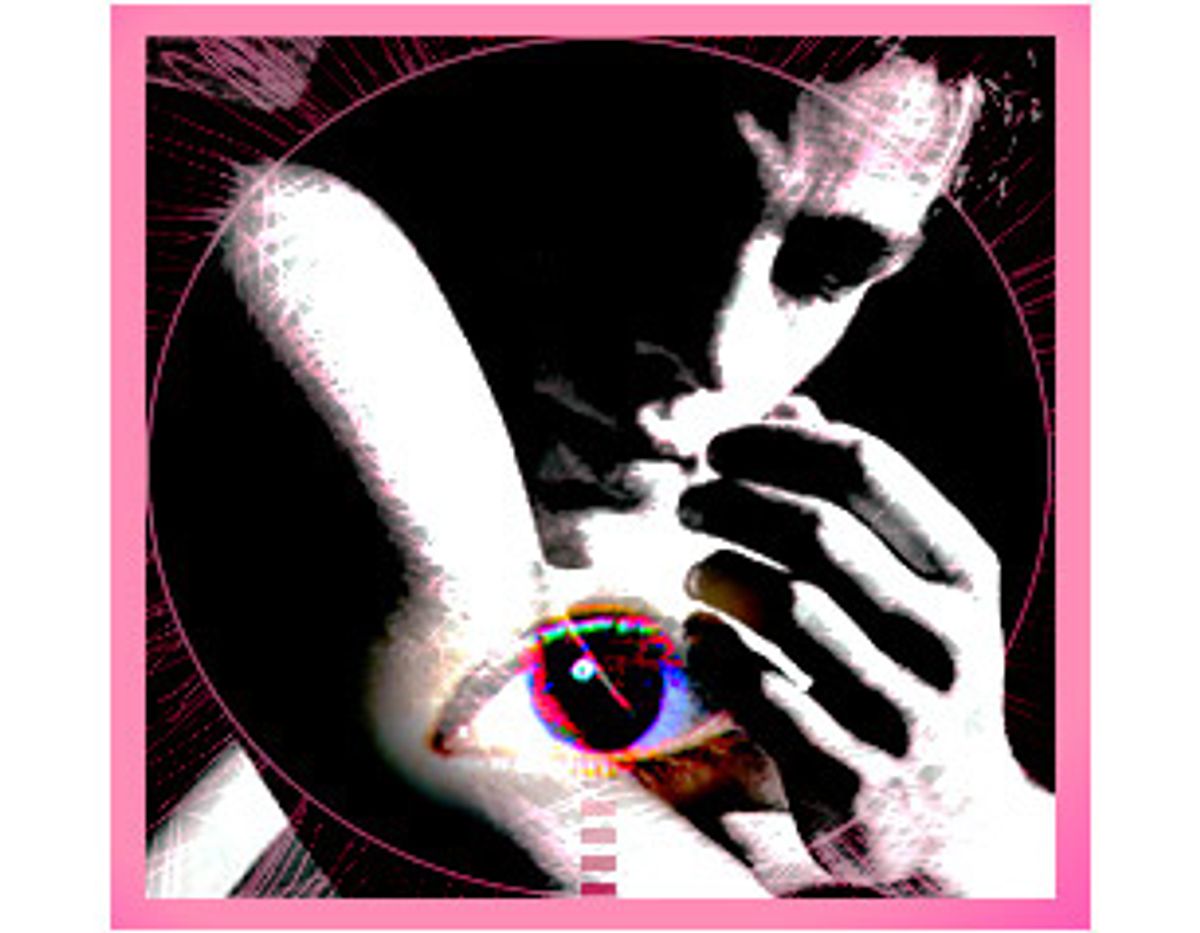 It's no great revelation that the film industry has always worshipped -- and objectified -- women. Female sexuality in particular, refracted through the lens of a male-dominated medium, has undergone several curious transformations.

There have been goddesses like Greta Garbo, Marlene Dietrich and Louise Brooks, who embodied sexual power through regal haughtiness and disdain; wisecracking tomboy princesses like Barbara Stanwyck, Lauren Bacall and Katharine Hepburn, who were luminous women with soft hair and strong chins and mouths that spit out a barrage of sharp-tongued witticisms; and kittens like Marilyn Monroe and Jayne Mansfield, who filled out the hard edges with voluptuous curves and exchanged wit for bewilderment. There have been long-limbed, silken-haired 1960s sexual adventurers, delicately sensitive '70s waifs, '80s power bitches and quirky but vulnerable '90s girls (portrayed almost exclusively by Winona Ryder).

In an industry that has traditionally functioned almost entirely as an outlet for the creative visions of male directors, writers and producers, what the stereotypes have illustrated is the way men (at least moviemaking men) see women. And the way they've seen them, traditionally, has been with a potent mixture of adoration, lust, loathing and fear. Yet the much-maligned "male gaze" of film-theory legend has already gotten more than its share of play. What has been woefully absent is any discussion of the female gaze.

Few female directors have been given the opportunity to bring their representations of women to the screen, let alone their idealized, fantasy versions of men. Since 1922, only two women have been nominated for an Oscar in directing. Neither won. A few directors, such as Yvonne Rainer, have been able to make a name for themselves in the world of avant-garde and experimental film; others, such as Elaine May, who in the '70s directed "Mikey and Nicky," still one of the most powerful -- and underrated -- films of the decade, seemed fated to enjoy their successes in obscurity. In Europe, Agnes Varda, Claire Denis and Lina Wertmuller have been making solid and intelligent films for years. In America, female directors have been largely ignored.

But in the mid-1980s, when a wave of low-budget independent films made moviemaking more accessible to Hollywood outsiders, a handful of women began projecting complex and interesting female characters onto the screen. Allison Anders, Lisa Krueger and Mary Harron all made films that explored the female experience with honest and fresh female protagonists. Tamra Davis, Kathryn Bigelow, Amy Heckerling and Mimi Leder crashed the boy-dominated party of mainstream comedy, action and horror. And let's not forget Barbra Streisand, Penny Marshall, Jodie Foster and Diane Keaton, who made the transition from actresses to directors and have given us a series of sweetly sentimental blockbusters.

But the new crop of female-fronted releases goes beyond the proto-feminist "about women, by women" model. The films of Kimberly Peirce, Krueger, Harron, Jane Campion, Denis and newcomer Sofia Coppola -- all of which are premiering soon or currently in release -- don't fall under the feather-soft rubric of the typical "woman's picture," nor do they shy away from raw depictions of sexuality or violence. This new wave shows the beginnings of a kind of inversion, a fresh element in filmmaking and in the cultural psyche in general: The female gaze has finally hit the big screen. Suddenly, we can discern the sexualization of the male actor by the female director.

Campion has always been a master of exposing both the subtle carnality and the startling innocence that lurk beneath the surface of her male stars. In both "The Piano" and the recently released "Holy Smoke" she finds her muse in Harvey Keitel, whose particular brand of beautiful ugliness exemplifies a stormy, visceral sexuality -- the "fire under the surface" of which Campion is so enamored. Some of her best male imagery is defined by a sort of "King Kong" idealization: the untamed brute with a soft heart for the right woman. Another element of Campion's representation is the recurrence of men easily manipulated by the women in their lives (the baffled boyfriend in "Sweetie," Sam Neill's brutish husband in "The Piano"). In "Holy Smoke," Campion continues this theme, with Keitel's cult deprogrammer becoming programmed himself by Kate Winslet, brainwashed not by rhetoric but by her eager and delicious voluptuousness. For Campion, men are as malleable as clay.

In Coppola's upcoming "The Virgin Suicides," Josh Hartnett gives an electric performance as Trip Fontaine, a teenage Adonis whose graceful swagger will tap into any woman's latent desire to seduce a 17-year-old. Coppola reportedly auditioned hundreds of young actors for the role, but with Hartnett she draws out a charisma and raw sexuality that can make you weak in the knees. This adoration of youth has existed for years in film. Watching Fontaine walk causes the same pang of guilty lust in women that Mena Suvari's character in "American Beauty" must elicit in men. But Coppola's scenes with Hartnett are a shrine to the fresh and vibrant carnality of teenage boys, a sort of reverse Lolita-ism. Eventually Fontaine becomes a catalyst for the film's central tragedy and his aura fades, but for one brief moment the seduction is complete.

In "Committed," Krueger has taken the age-old theme of a woman in love with a man who's afraid to commit and turned it into a comedic road movie. Luke Wilson plays a blinking and confused sensitive guy searching for his soul in all the wrong places. What he has forgotten -- in the midst of all this endearing self-absorption -- is his wife, played by Heather Graham. Graham's search for her husband is fueled by a blind optimism that would be annoying if it weren't for Wilson's inherent sweetness. The "nice guy" stereotype is in full form here and it's a role Wilson was made for. With his good-natured demeanor and puppy-dog face, he's an actor who can make even the most blatant selfishness seem somehow charming.

In "American Psycho," Harron directs a delicately boned, elegantly dressed Christian Bale as Bret Easton Ellis' coldhearted killer. Bale plays the part with bored and haughty bemusement, moving through the film like a smugly satisfied cat. "American Psycho" is not a film one might expect to be directed by a woman, but it is Harron's feminine touch -- and her humor -- that keeps the film's brutal elements palatable. In a satirical take on '80s excess, Bale's rich kid has a sense of entitlement as large as his ego -- yet there's something in his snobbery that is appealing. We can laugh at his cruelty because Harron has created an effective film stereotype: the privileged white Ivy Leaguer every viewer loves to hate.

In Peirce's haunting "Boys Don't Cry," the brutality of the film's "real" men is juxtaposed beautifully with the main character's self-constructed masculinity. Hilary Swank's "Brandon" seduces Chlok Sevigny's Lana by offering a balance of female vulnerability and male strength. The girls in the film love Brandon for this quality; the men despise him. The film's violence is fueled by the male characters, whose ignorance and insecurity in their own sexual power lead to a disturbing climax. But what makes the film truly explosive is the question it poses: Is what women really want in a man a woman?

One of the most beautiful films this year is Denis' "Beau Travail," a meditation on male sexuality that is as gorgeous and sublime as any movie made in the past decade. Set in the barren, black-rock plains of northern Africa, it takes as its essential focus the beauty of the male form, flawlessly composed in a series of shots of the main characters, a squadron of Foreign Legion soldiers. Throughout most of the movie, the sweat, blood and animal sexuality that make up the male mystique are reflected in the harshly beautiful landscape. The camera slowly pans over hot sands, twitching muscles and blue sea with equal relish.

Of all of these directors, it is Denis' fearless sexualization that perhaps best illustrates our perception of men. Her characters are a mixed batch, encompassing the whole gamut of male iconography: from Campion's brute, to Coppola's pretty boy, to Krueger's nice guy. But it's her unapologetic objectification of the male body that is most exciting of all.

The "eye," so long dominated by men, has slowly but surely been attained by female directors. And what does this reflection show us? How exactly do women perceive men? Do we see selfish brutes, softhearted fools, psycho killers? Do we worship, like men, the beauty of youth? Do we pay tribute, like the Greeks, to the thin graceful curves of the adolescent male body? Most likely, we do all of the above, with each of these elements contained in our assessment of the opposite sex -- the innocence, the cruelty and the helplessness combined.

But what's most refreshing is simply that female directors are beginning, at last, to explore the same themes their male counterparts have explored. It's our time to deconstruct the opposite sex, to manipulate male sexuality according to our own observations and whims. After too many years, it's finally our turn to objectify, sexualize, fear, worship, loathe, adore and, best of all, lust after.