The Alaskan Iditarod is supposed to be about huskies having fun, but that's not what animal rights groups think. 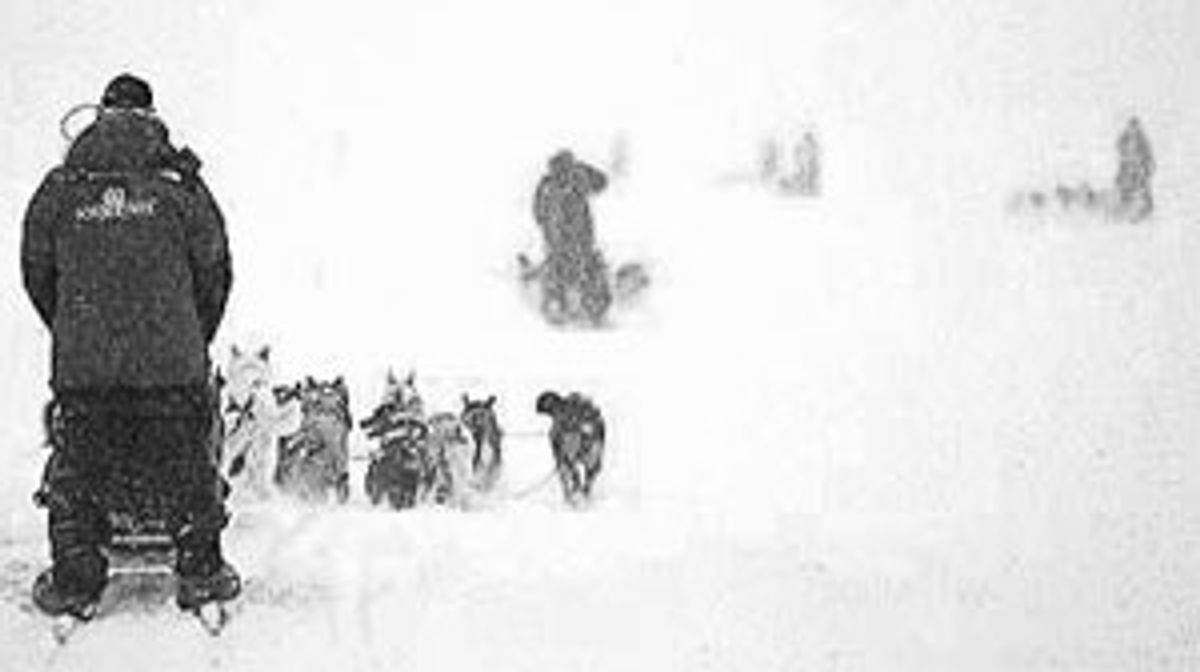 Most people think the place to be at an animal contest is at the starting gate. If you really want to know what's going on at a sled dog race, though, you should hang around the parking lot. On March 5, in Wasilla, Alaska, the official starting point of the 1,049-mile Iditarod marathon race that Doug Swingley won last week for the third time, the local ball field was a noisy assembly line slapping together cross-country dog teams for the tremendous task ahead. Discarded booties littered the snow; handlers muscled dogs out of transport trucks; vet techs counted dogs; more than 1,000 huskies gave voice to the ceremonial tension, with helicopters adding to the din. The atmosphere at the announcer's booth was all hope and heroism. The buzz among the mushers was something else again.

Animal rights groups couldn't be expected to know what dog racing is all about, competitors said, and yet here they were, trying to wreck everything. They'd persuaded people on the East Coast to spam a sponsor, and that had resulted in the company's yanking its support the day before the race. Mushers blamed the Humane Society of the United States and its even wickeder cousin, People for the Ethical Treatment of Animals. "They don't think we should run dogs at all," fumed one competitor. "They say we beat the teams to make them run themselves to death."

It's common knowledge among Alaskans that champion Rick Swenson had once lost a dog mushing through an icy stream and hadn't been appropriately apologetic, and that Jerry Riley reputedly hit a dog with a snow hook 10 years ago. As the media got increasingly into the act, race watchers were saying, the Iditarod was going to have to withstand more public scrutiny, and the big test was sure to come up. But here in plain view at Wasilla was the material from which all the stories were made -- the mushers, the dogs, the start of the trail -- and everything looked great. The teams were doing their damnedest to drag their handlers off their feet, to lose the mob and run. No cues were needed at the end of the starter's countdown, when the handlers scattered and the musher stood off the brake. They all took off like furry mercury, heads down, all business.

Swingley was grinning his head off as he left the starting line. So was three-time champ and dog-care wizard Martin Buser. DeeDee Jonrowe, sponsored by clothing retailer Eddie Bauer, mushed out to noisy cheers. Everybody was a fan. Lynda Plettner, revered for her dog sense and exuberant straight talk, high-fived everybody as she rocketed out the chute. One man sped off with a carnation in his teeth. People with the biggest sponsors had color-coordinated harnesses, parkas and even booties. Jerry Riley, who claims he started mushing "at conception," showed up in a stretched-out sweater. Australian Neen Brown wowed the crowd with the only team of matched Siberians. The Russian entrant, Anna Bonderenko, sported huskies the color of milky tea. Some dogs wore capes to reflect the sun, all wore protective booties and all were towing a three-day supply of their own food, in case they got stormbound or lost.

Native Alaskan Mike Williams, who mushes to promote sobriety -- a big issue in the bush -- was kissed by his wife in her magnificent beaded parka as he departed, his sled crammed with little local kids. Three-time-winner Jeff King got his usual huge send-off. The day before, at the ceremonial start in Anchorage, he had mushed down Fourth Avenue with a noticeably pale young girl standing with him on his runners -- this year's Make-A-Wish Foundation child. King does this every year; some of his passengers have since died. One was buried in an Iditarod shirt.

All in all it's a compelling scene: The dogs are nearly inside out with excitement, the weather's beautiful, the place is crawling with vets, race officials stand ready to disqualify mushers for meanness and, after all the effort, the prize money is chump change compared with what athletes in some other sports normally make.

In the days to come, we all know, there'll be variations in mushers' talents and suitabilities to the task, and there'll be canine infirmities that get accidentally overlooked. Tired, sore dogs will be "dropped" at checkpoints, to be fed and flown home. One might even die. Does this make the race a tragedy? The pro-mushing editorials in the Anchorage Daily News keep rolling out, the calls pour into the radio stations and the animal rights folks' Web pages continue to blast the race.

Fans can't keep up with the goings-on beyond the first major checkpoint: The roads all run out. They can only grab information by checking with the official Iditarod Web page, which quickly becomes habit forming, since the standings change constantly: who's dropping dogs, who skimped on their rest periods, who got wrapped around a tree. Beyond the obviously fatiguing nature of such a marathon, it all seems like a lot of strange fun.

But the Humane Society doesn't think so. The dogs, it says, are "raised completely outdoors in harsh northern climates in large 'dog yards,' where they are confined by tethers that allow them access to doghouses but which purposely prevent them from interaction with other dogs." PETA announces on its kids page that "dogs in the Iditarod have to run an average of 120-130 miles a day nearly every day for 10-14 days in a row! At least one or two dogs die every year, sometimes over a dozen die, usually from stress pneumonia, ulcers or 'Sudden Death Syndrome' -- which means that they just drop dead while running!"

Nobody's suggesting that mushers can prevent accidents when they're running so hard, but these allegations seem ridiculous. How can a dog in a dog yard be prevented from interaction with other dogs? Another thing: 120 miles a day for 10 days is longer than the entire race. The suggestion is that the mushers and their sponsors are a bunch of lying bastards who live to torture dogs and make money.

But only the Sled Dog Action Coalition Web site goes all the way. The lead item on this site is a photo of a team mushing along, with the musher in the basket with his eyes closed. One of the dogs is being dragged -- and looks dead. The picture certainly appears to be unfaked. "The bond between dogs and the musher is one of abuse and exploitation," the SDAC claims. "If a musher loved his dogs he would not force them to run 1,150 miles in 9 to 14 days."

All the site's info is presented as if it were evidence of crime: sleds hitting trees, mushers worried about the weather, tug lines on harnesses being short, the race's purse money going up, dogs chasing bison. It fogs up the message of the picture, which leads a reader to wonder: Is the photo recent, and is it typical? If so, it's all the coalition needs to dismantle the whole racing system. But that's not happening, even though the picture implies that the nature of the Iditarod is to deny that anything brutal ever happens, for the express purpose of committing brutality. "Imagine being tethered to 15 other runners on a 50-foot gangline while pulling 400 pounds," the SDAC quotes USA Today sports columnist Joe Saraceno as saying.

Well, no, let's not. Being able to read dogs' body language is something most Americans, even those who don't know beans about training them, can do. And if you've ever seen a team at the starting gate, much less ridden behind one, the animals tell you one thing with their voices and movements: They love the race. They jerk you into a run before you can breathe, and it feels fantastic. Eventually, they'll settle into a doggy trot, which they can keep up for a couple of hours provided they don't get too thirsty or too hot. Under the right conditions, they can keep it up all day.

The fact that Iditarod mushers try to create the right conditions and to outwit the weather on a race this long tells you something about their egos, not to mention the basic Alaskan idea of how to do things. Facing down deathly discomfort is a sacred ritual here, and they'll be damned if a bunch of creampuffs from "outside," where they know nothing, is going to tell them how and whether to mush. The Iditarod is an exaggerated version of something Alaskans do every day that a lot of animal fans would be nuts about, if only they got the chance to try it.

The criticism the race received this year can serve as a useful heads-up on dog care. But this will work only if the accusations are honest and accurate. The current situation practically guarantees that both sides won't be chatting with each other anytime soon, and that the curious public can get set for less, not more, news on how our canine pals up north are doing.

Meanwhile, nobody died this year, at least as far as we know. And you know, it wouldn't kill Fido if you booted him off the living room couch and gave him something to do once in a while, too.