The filmmaker says that we have to accept responsibility for our actions. So why can't he own up to his racist stereotypes? 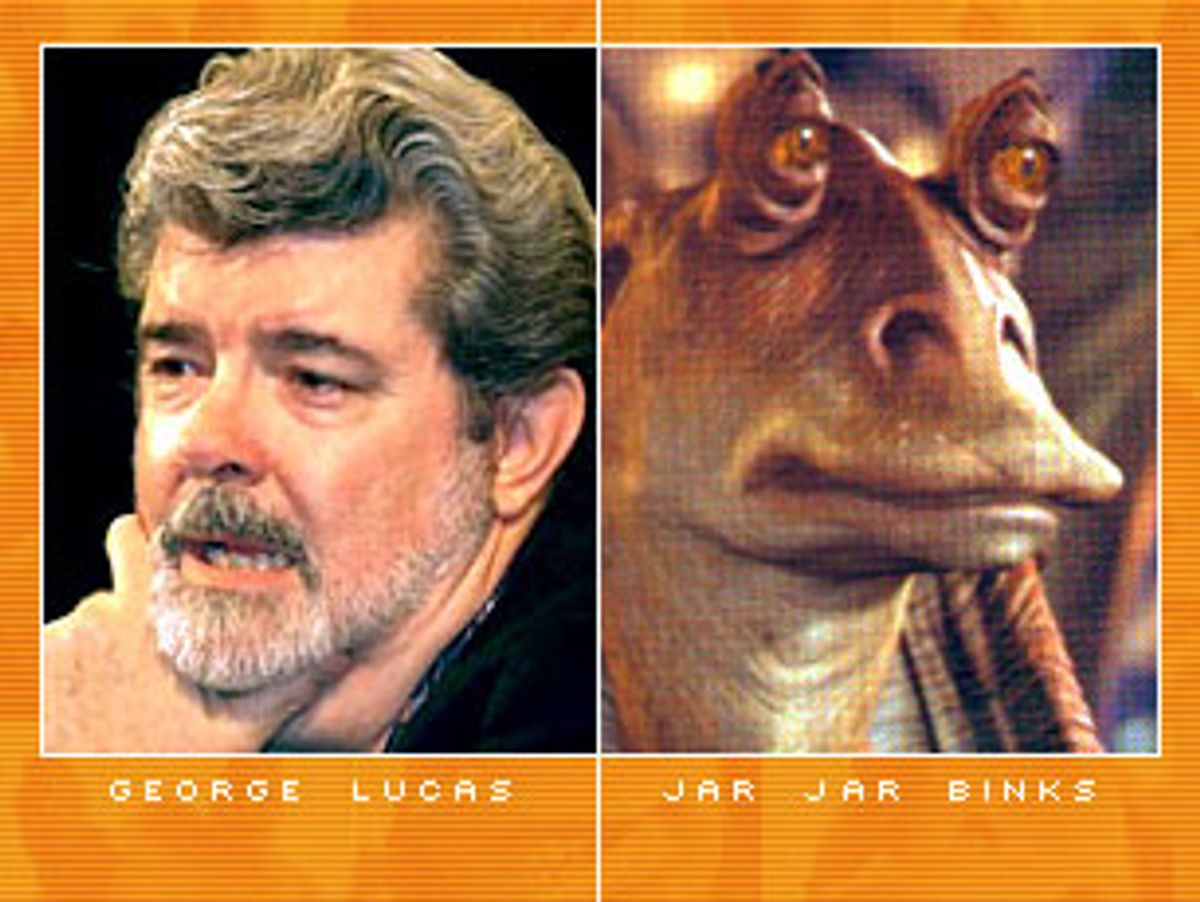 George Lucas sounds like a Jedi when he talks about the power of his movies. "One of the big rules that I live by is to accept responsibility for what I'm doing," he told my graduate journalism class at the University of California at Berkeley recently. "You can't sort of pretend that you're not, or that you're not influencing people."

Lucas had stopped in to talk and answer questions for about 50 students in the journalism school's documentary film program. And it was a nice, congenial -- if dry -- talk until he turned it into a forum for bashing movie critics and denying that his "Star Wars" characters draw on racist caricatures. But I'll get to that in a minute.

For the first hour, Lucas rambled on about technical matters, pausing occasionally to touch on big issues, like the subjective nature of truth and the way that individuals perceive reality in different, equally valid ways. This was a discussion for documentarians, after all.

But something had been nagging at me ever since I saw his blockbuster opus. I raised my hand, swallowed and asked a question that seemed obvious. "Mr. Lucas, given your anthropological interests, were you surprised by the criticism of 'The Phantom Menace' as having ethnic and racial overtones?"

He seemed extraordinarily defensive. I thought I'd phrased the question carefully enough. I went through the checklist in my head. Did I call him Mr. Lucas? Check. Did I studiously avoid suggesting that I thought the film was racist? Check. Did I phrase it in such a way that he wouldn't feel attacked? Not according to him.

"You hurt my feelings," he told me privately after the discussion ended. And I suppose that's a possibility. But Lucas, as he had shown, isn't willing to extend his viewers the same courtesy.

I assume that he felt attacked. Maybe it was the setting: There were dozens of university students seated before him in rapt attention, eager to learn from him, the George Lucas. And I had burst his bubble -- again. Back when "The Phantom Menace" came out last summer, several critics accused Lucas of perpetuating racist stereotypes, particularly with the Gungan character Jar Jar Binks. Joe Morgenstern, writing for the Wall Street Journal, called Binks a "Rastafarian Stepin Fetchit on platform hoofs, crossed annoyingly with Butterfly McQueen."

Lucas stubbornly dismissed the idea that Jar Jar could be linked to stereotypes of African-American slaves or minstrel characters. "How, in any credible way, could you take an orange amphibian and say that this was a racial stereotype for African-Americans?" he asked.

When I mentioned Jar Jar's Caribbean patois he simply cut me off. "Just because somebody has an accent doesn't make them a stereotype of a particular kind of thing."

And he was right. Accents in and of themselves may not be stereotypical. But it's the overall image of Jar Jar that smacks of racism. His buffoonery, gait, appearance (one journalist thought his ears were reminiscent of dreadlocks) and word choice all combine to make him offensive. Lucas refused to even entertain the possibility his work might contain such stereotypes.

I felt betrayed. I had long been a fan of the "Indiana Jones" and "Star Wars" series. When I was a little girl, there wasn't much that my father and I both enjoyed. But we loved to run around the house in our socks with plastic light sabers glowing incandescent red and green. I'd make him play Darth Vader to my Luke Skywalker. "Star Wars" spoke to the child I was, and that my dad still wanted to be. Now, 20 years later, my younger brothers chase my dad (who's gotten a little slower, he admits) with towels pinned to their pajamas to make capes and tin foil covering old wrapping-paper tubes for light sabers. At ages 4 and 6, they were among a small group I knew who didn't think there were racial problems with "The Phantom Menace."

Lucas blamed the rash of criticism on a single Los Angeles Times writer who he said had misheard Jar Jar say the word, "Massa." "The L.A. Times took that little statement that was in a review and turned it into a whole thing about the film was racist, anti-Semitic and misogynist and everything else they could think of."

"Critics aren't creators, they're destroyers," he said. "And I don't think any creative person will ever argue with me about that."

Well, that tore the room up. "And I'm being kind," he added as soon as the laughter died down. Another student asked him a question about the next installment of the series, and Lucas said goodbye.

I was reeling. The only thing more offensive than his name-calling was the implication that filmgoers are sheep. Without the Los Angeles Times article, he suggested, no one would have thought the film was racially problematic. Of course, Lucas didn't bother to mention that at least 15 other articles and reviews in papers from Salt Lake City to Omaha to New York had suggested that the film contained racist elements before the L.A. Times article ever appeared.

But Lucas had his mind made up. The critics were out to get him, and he hadn't made any mistakes. In essence, his opinions, his facts, precluded the possibility that he could have, in his words, hurt anyone's feelings. If you thought the film was racist, by his estimation, your view wasn't "credible." Or, if your feelings were hurt by his images, it's because you just can't see him the way he sees himself -- as a benevolent creator who gives the world his gift, celebrates universal harmony and the triumph of good over evil.

Lucas wasn't willing to take responsibility for his characters because he couldn't accept that a lack of racist intent does not absolve him of that responsibility. It goes to his statement that there are different, equally valid perceptions of reality. It's just unfortunate that he doesn't seem to buy that, either. "It's your truth," he told us. But apparently, in Lucas' world, his truth is the only one that matters.

And that hurt my feelings.

Alynda Wheat is a graduate student at the University of California at Berkeley.