It's a vile, cold, wooded wasteland populated with propaganda-spewing lumberjacks and their irritating ilk. Who needs it? 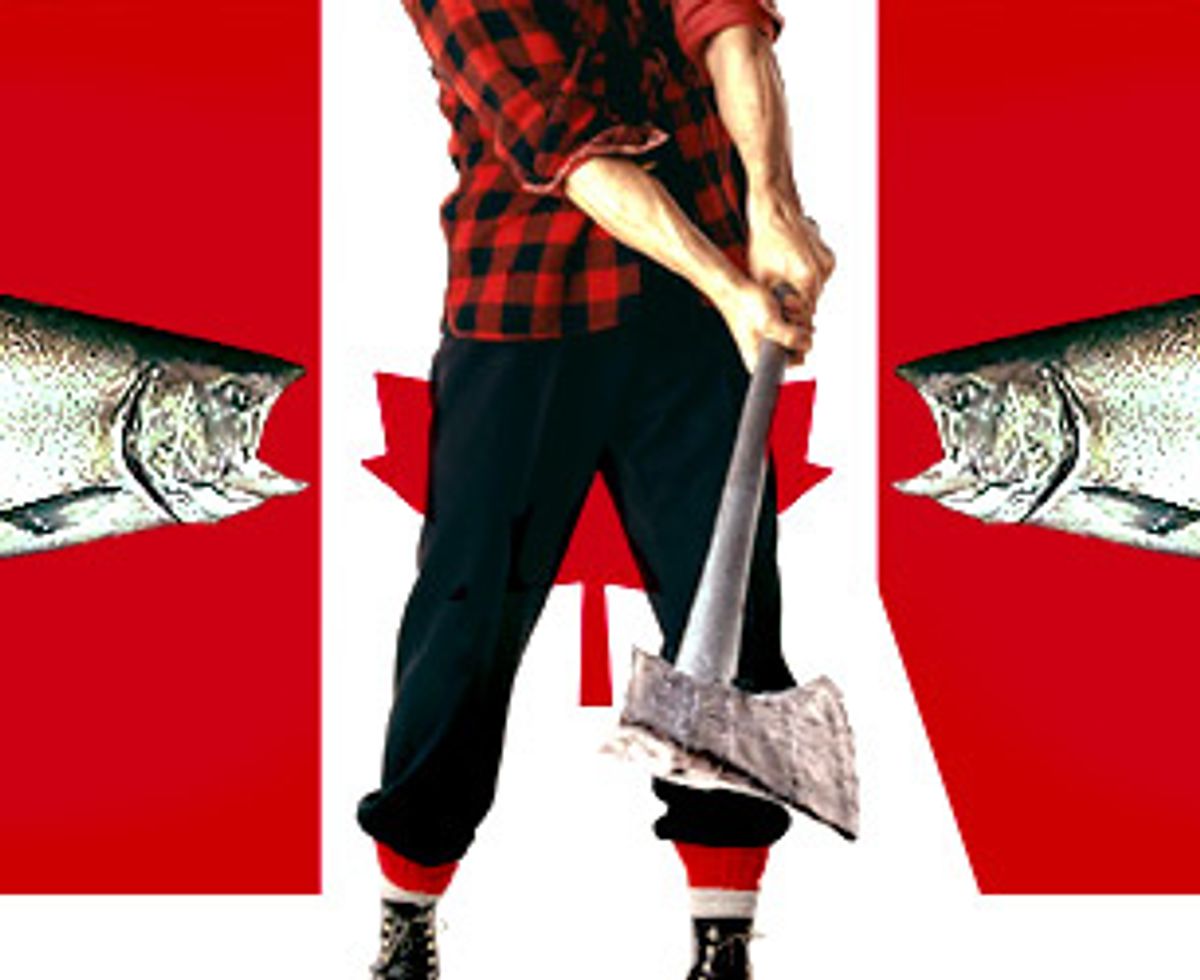 Over the summer of 1997, about 170 angry (and presumably not very pleasant smelling) Canadian fishermen formed an impromptu naval blockade, preventing the Malaspina, an Alaskan passenger ferry, from leaving port in Prince Rupert, British Columbia. The Canadians were apparently peeved that Americans from Alaska had overfished sockeye salmon in the Pacific, and they effectively took the Malaspina's 150 or so passengers hostage. They relented after a two-day siege, but President Clinton warned ominously that if and when an American ship was held against its will again, the United States would take stern countermeasures. And he wasn't just threatening to cut Canadians off from must-see TV.

Had it come to this? The United States and Canada, the two nations that share the world's longest unprotected border, on the verge of becoming another Bosnia -- all because of a bunch of fish? Not exactly. But there is plenty of empirical evidence to point to a serious worsening of U.S.-Canadian relations.

In fact, ever since the Toronto Blue Jays won baseball's World Series for two consecutive years in 1992 and 1993 (during which a U.S. Marine color guard accidentally carried a Canadian flag upside-down at a pre-game ceremony), Americans' tolerance for cute and cuddly Canada has fallen considerably, the relationship now having chilled to a temperature slightly frostier than a March midnight in Moose Jaw, Saskatchewan.

1. Title III of the 1996 Helms-Burton Act -- sponsored by America's No. 1 loon, Sen. Jesse Helms, R-N.C. -- not only gives Americans the right to sue foreign companies that own property in Cuba seized from Americans during Fidel Castro's revolution but also prevents executives of such companies and their family members from entering the United States. (This law has kept many Canadians from gaining entry to the States, and Canada officially complained that the law violated the North American Free Trade Agreement.)

2. An additional piece of legislation, a 1996 bill known as "IRA IRA" (a nickname for the Illegal Immigration Reform and Immigration Responsibility Act), contains a hotly disputed passage, Section 110, that would subject all foreigners -- including Canadians -- to odious border checks before entering the United States. Presently, most Canadians are simply waved through, but if Section 110 passes, officials in both countries are predicting up to 20-hour traffic tie-ups at border crossings, which could cause irreparable damage to the $1 billion worth of business we do with our No. 1 trading partner, Canada, every day. (The act was to go into effect in 1998 but has been postponed until the end of 2001.)

3. In 1997, a concerned shopper in a Winnipeg, Manitoba, Wal-Mart noticed that some of the pajamas on the shelves were made in (gasp!) Cuba. Amazingly, tensions between Washington and Ottawa rose over this incident, and anti-Canadian sentiments on this side of the border stirred as Wal-Mart vowed to continue selling the pj's in its 136 Canadian stores. The pajamas were actually on the agenda when Canadian Prime Minister Jean Chritien visited the White House that year. Thumbing his nose at Washington, Canadian Foreign Minister Lloyd Axworthy later paid a state visit to Cuba, in further bold defiance of the American-led boycott and isolation policy.

4. The Malaspina incident also strained U.S.-Canadian relations over the summer of 1997, and things got even worse in December of that year, when Canada attempted to take center stage in the international political arena by hosting a landmark convention intent on banning land mines the world over.

The United States snubbed the Ottawa Treaty, denying Canada its moment in the sun and embarrassing the Chritien government. (More than 120 countries signed the treaty, while the United States joined Yugoslavia, Libya, Iran and Albania among the 30 or so countries that did not.)

5. As recently as this January, Washington became concerned with seemingly lax Canadian border patrols, after a couple of Algerian terrorists managed to enter the United States via Canada.

"We have excellent relations with Canada," argued a U.S. State Department official who requested anonymity. "Yes, the things you pointed out have happened, but they're by no means any indicators of the state of relations between the U.S. and Canada. The fact of the matter is that Canada is our largest trading partner, millions of people cross the border freely every day and we continue to work together on any number of bilateral and multilateral issues. These are minor bumps in an overall excellent relationship."

Meanwhile, in some sort of reverse geographical gamesmanship, the Los Angeles Times' Canada correspondent apparently covers the country from its New York bureau. (The Boston Globe has a bureau in Montreal, though its bureau chief lives in Vermont.)

The reason few American newspapers operate a Canadian bureau, or let their reporters live in Canada, has to do with a dispute between the newspapers and the Canadian government over taxable income for journalists. (To make up for the extra amount that a Canadian-based American journalist would have to pay in Canadian taxes, the newspapers would give them more money, which in turn would also be taxed.)

And then suddenly, last summer, those two fart-happy vulgarians Terrance and Phillip "warped the fragile little minds" of (fictional) American kids in South Park, Colo. It turns out these anti-intellectual anti-heroes are from -- you guessed it -- Canada, leading one angry and animated mother in the "South Park" movie to "Blame Canada!" in a highly memorable musical number, during which American troops pound Canadian cities with artillery fire. Amusingly, the song was nominated for an Oscar. But was it the humor of the lyrics that garnered the song a nomination?

This might be a stretch, but the song may also have been nominated as a message from the movie industry to Ottawa, hinting at underlying tensions between, believe it or not, Canada and Hollywood.

Dozens of film and television projects are being lured north of the border because of cheaper production costs in Canada, which is putting the hurt on Hollywood. Plus, if a movie is deemed a "Canadian production" by the powers that be in Ottawa, it can qualify for direct financial subsidies from the Canadian government.

Hollywood guilds and trade papers have angrily labeled these film and TV operations "runaway productions," in that they are fleeing Hollywood for cheaper costs elsewhere. "The Canadian government has adopted an array of policies to promote Canadian culture, some of which American media and entertainment companies claim are protectionist in restricting access to the market," said a Canadian diplomat who requested anonymity. "We say that film is a global industry and that these are films that would never have been made because of what they would cost in California."

Perhaps these sentiments were present when recent films such as Michael Moore's "Canadian Bacon" and Trey Parker's "South Park" -- both of which contain a scenario in which the United States and Canada go to war -- received green lights from U.S. studio executives.

The American government also believes that the Canadian entertainment market is restricted -- for magazines, newspapers and radio, for example. "Americans cannot establish or create magazines with more than 49 percent ownership," said the Canadian diplomat. "And we have quotas on radio airplay in Canada -- 35 percent of the programming has to be Canadian in origin." There is even a point system for determining what is "Canadian": Two of the three main entities involved in each song -- the artist, writer and producer -- have to be Canadian for the song to qualify.

Perhaps to alleviate the escalating tensions, the Canadians are sponsoring a couple of lighthearted cultural events in New York. Monday was the kickoff of Canadian Restaurant Week, in which a few Canadian chefs are visiting Gotham restaurants, bringing with them their recipes for peppered strip loin of arctic caribou with merlot-blueberry reduction, Prince Edward Island oysters with sunchoke cream and sevruga caviar, and pea-meal-wrapped buffalo fillet. And on April 14, the Lincoln Center's Walter Reade Theater will present, with the Canadian Consulate's approval, a mini-film festival cheekily titled "Blame Canada!"

"For many supposedly sophisticated New Yorkers," reads the program of the festival, which will feature Canadian-made films by directors such as Atom Egoyan and David Cronenberg, "the image of Canada remains a stereotype: a land filled with lumberjacks in ear muffs, trudging around the frozen tundra on their snowshoes, humming Gordon Lightfoot songs. But if you take a close look at the steady output of fine movies being made north of the border, the view changes."

What kind of insidious propaganda is this? First the Oscar ballots are mysteriously "misplaced" before turning up again. Then the Oscar statues themselves go missing.

Everybody has his or her own theories, but I smell a maple thief.