Why do elephants paint?

Well, because there's a shortage of jobs in the logging industry these days. And, no, as a matter of fact, they don't sell their canvases for peanuts. 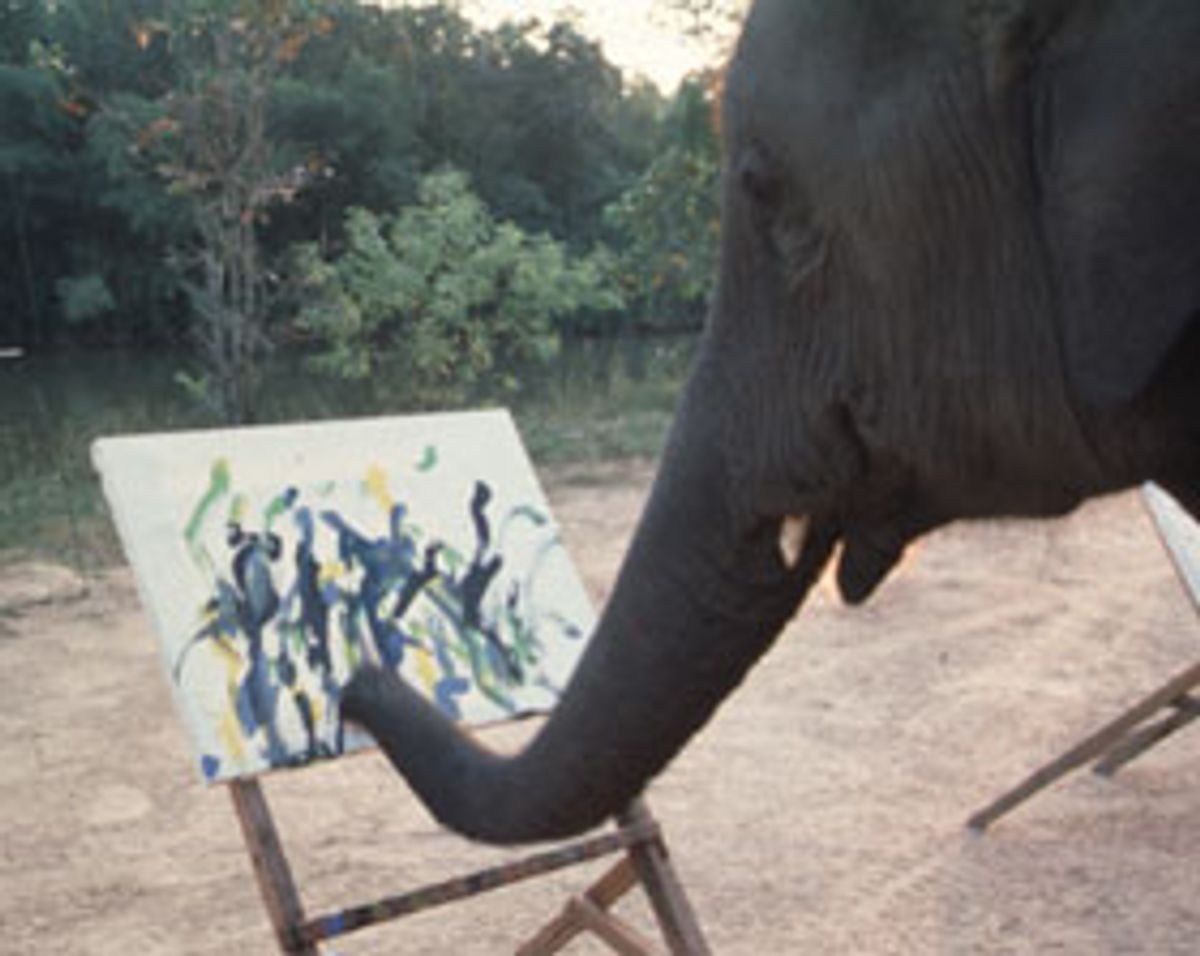 If you are an artist, thank Vitaly Komar and Alex Melamid for their relentless efforts to show that art is a hoax. If you're an Asian elephant, thank them for getting you a job.

Komar & Melamid are a team of artists in New York who emigrated from Russia in 1965. Their work has ranged from paintings satirizing Soviet iconography to "The People's Choice," which used polls and market research to create the "Most Wanted" and "Least Wanted" paintings for various countries and cities. (Landscapes with lots of blue are the universal favorite.) In other words, they have repeatedly used art to make art look silly and pompous.

Now they are teaching elephants how to paint. It all started when they read reports of the plight of domesticated elephants in Asia, whose numbers have dwindled in recent years from 11,000 to only 3,000. The elephants used to make a good living hauling trees in the logging industry, but deforestation of the countryside has led to bans on teak logging. There aren't many opportunities for 6,000-pound mammals in the Asian job market. The elephants and their keepers, or mahouts, were forced to scrape by on performing tricks for tourists or doing illegal logging work at night.

Komar & Melamid had heard about elephants that painted in American zoos, including Ruby, whose works raised more than $100,000 a year for the Phoenix Zoo before her death in 1998. They took the idea to Asia, opening the world's first elephant art academy in Lampang, Thailand, in November 1998. In 1999 their Asian Elephant Art and Conservation Project started two more academies, near Ubud in Bali, Indonesia, and in Kerala, India.

In the art classes, elephants work with trainers to learn to hold a paintbrush in their trunks and to make basic strokes across a canvas. "We try to stay out of artistic decisions," says Melamid, the spokesman for the duo. The elephants' abstract creations are beginning to sell to tourists who visit elephant camps. Last year the works raised about $5,000 in Lampang, "which is big money for Thailand," Melamid says. And this week, on March 21, paintings by elephants were auctioned at Christie's in New York. (One painting by Ganesh, a 6-year-old Indian elephant, went for $2,100.)

Of course, the project has implications beyond keeping elephants off the dole. Are these paintings just a kind of circus trick, or are the elephants really creating art? In an interview in the New York studio he shares with Komar, Melamid took a puckish delight in the puzzles and paradoxes the art of elephants presents.

How does an elephant get into art school?

The schools are started at elephant camps, so they don't have to travel far. Not every elephant can paint, though -- maybe only 10 percent.

Are they good students?

Juthanam [a 7-year-old who lives in Lampang] and Ramona [a 5-year-old who lives in Bali] are the sweetest ones. They are smiling all of the time. They are kids. We work mostly with younger elephants; supposedly they are easier to teach. They're also smaller. When they get to my age they are gigantic, and the boys have these huge tusks. It's kind of scary. Some seem to enjoy it, but they can't paint for very long because they get bored and start looking around. Some do it quickly. Juthanam is a very careful painter; it takes her so much time to paint. She'll hold the brush in front of the canvas without touching the surface. You are waiting and thinking, "Juthanam, please get on with it." Then -- blip -- she'll make a tiny mark.

Do you think my dog could paint?

The thing about elephants is they have this unique organ, the trunk. It has 50,000 muscles, much more than the hand. It has a sense of smell; it breathes. Imagine if your hand had a sense of smell. It's amazing, really. And art is born out of necessity. There are 3,000 elephants with no jobs. We can't set them free because there is no wilderness. Animal art, social concerns, environmental concerns -- all these important subjects of the end of millennium got connected in this project.

What does this project mean for the art world?

If this goes as planned it will change art forever. No kidding. We will have 1,000 painting elephants by the end of the year. They will make maybe 100,000 pictures a year. At some point the size of the enterprise will be so big it can compete with human art, whether you want it or not -- not compete, but influence each other.

An example is photography. I remember as a young artist, the worst accusation you could make of an artist was: "Are you a photographer or what?" People were ashamed to use photography. They always did, but they kind of concealed it. Now it's fashionable to be like a photographer. These relationships are always changing. Now people say, "Are you an elephant? Come on, what are you painting?" A couple of generations will really reject elephant art. But then new artists will come and say, "Yes, we are elephants!" Maybe art students will try to find their inner beast, their inner elephant. I don't know.

So someday all art will look a little more like elephant paintings?

The highest art for us is still self-expression, something inner -- if you don't think, maybe that's the best art. That's why the late art of [Willem] de Kooning is so good. He became senile. And in a way to be senile is to be like an elephant, or any other animal, totally mindless. And in a way maybe it's the best way to produce art. At that point the elephants can compete with us; it's a level playing field. With mathematics, I don't know if we'll ever achieve a level playing field. Actually, I am almost an elephant in mathematics.

Some people say what the elephants do is not art.

Well, what is art? With modern art it's always a question. Since the time of [Marcel] Duchamp, whatever is in the gallery or museum becomes art. That's the way it is now. And the question became irrelevant because if everything is art, nothing is, in a way. We are trying to take art from the museums and see if it works or not. If an object is taken out of the museum, will it still work as a piece of art or will it lose its value? It's a field war. We're not in a classroom.

Why was "The People's Choice" so controversial?

We learned from that project that art has become a new religion; it's a full-blown religion. People really go to museums to have something to believe, to have a mystical experience and stuff like that. And anything you say that is different seems blasphemous to them. You touch on something that is holy. Religion is like art -- it's not clear what is involved. A rational explanation of either of them never works. Does God exist? Does art exist? It lives on this irrational faith, and that is part of its power.

Has there been as much controversy about the elephant art?

Well, humor saves it. But if you talk about religious subjects as if they're not religious with a religious person, you can offend someone.

Do you have faith?

I'm an artist, but an old artist. I've had different stages in my artistic career. I have been passionately in love with art, maybe in a religious way. Now I'm in my atheistic phase.

Do you believe the elephants are making a kind of automatistic art?

The whole idea of automatism was reductionism, to go down, go simpler, in our feelings. That's kind of the 20th century. Maybe this is going even simpler, going to a "lower" species. I don't know. When Jackson Pollock was painting, was he thinking about anything? If he had been blindfolded, would his art be better or not as good? These are very profound questions which unfortunately I'm not intellectually prepared to solve. But it touches on a nerve. When I was younger I was sure that I could resolve some of these things with my brainpower, but now I understand I can't understand anything anyway. The point of the artist is that we can show. I'm not sure that we can make any decisions. We can just show people and let them decide for themselves.