Bruce Haring sets out to tell the amazing story of how the MP3 movement turned the recording industry on its head, but misses the beat. 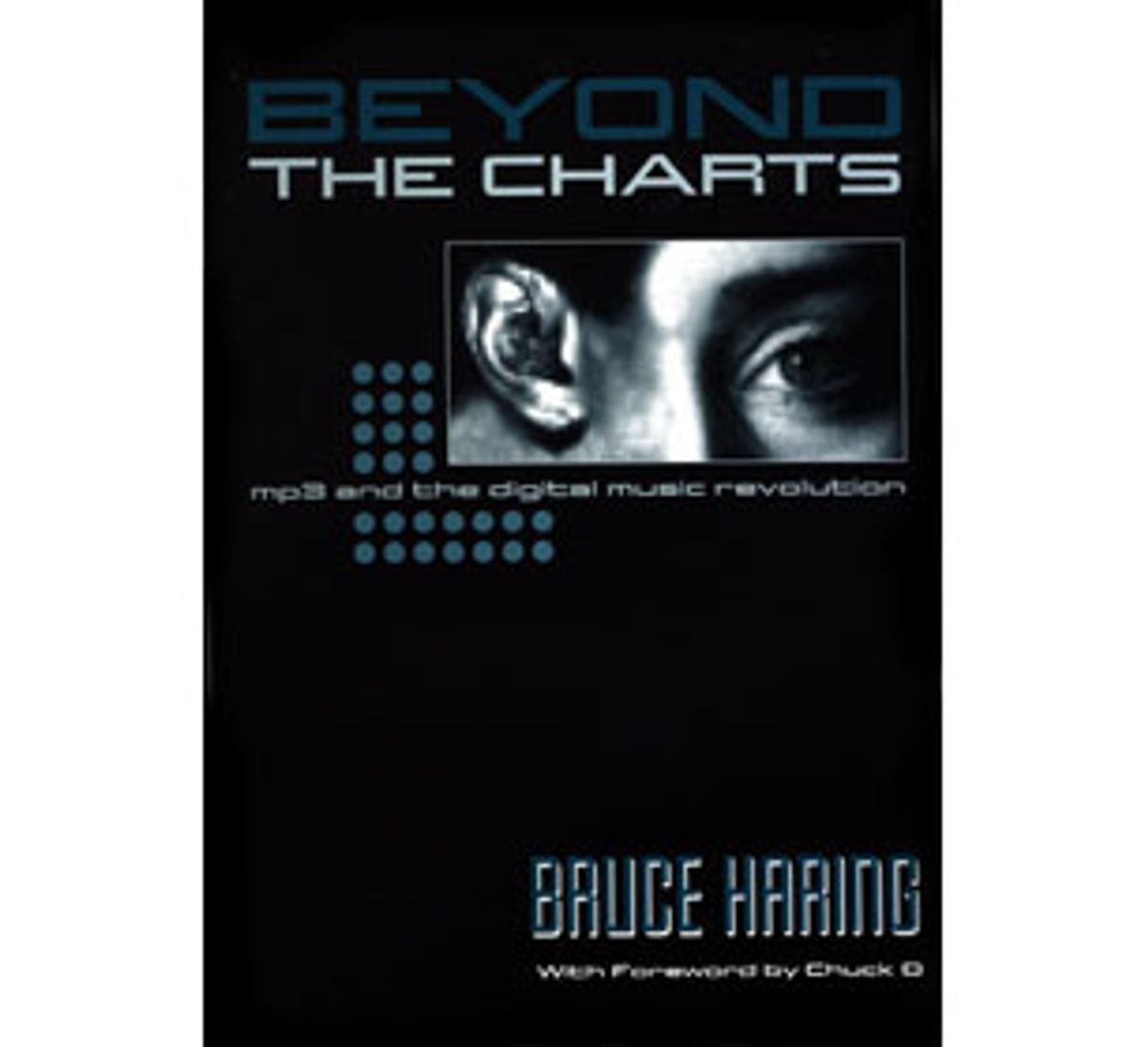 Of all the paradigm-shifting sagas that
have emerged in the past few years, the
MP3 movement is one of the most
interesting. Here we have an innocuous
little music format that has launched a
hundred lawsuits, buoyed little-known
musicians into stardom, made
music-loving geeks into millionaires and
turned one of the most lucrative
industries in America on its head.

The rise of MP3 is a story that should
make a terrific book -- a chance to show
the impact this movement could have on
issues like freedom of speech, notions
of ownership and copyright, artist
empowerment and the decentralization of
power in the music industry. So when I
heard about the new title by USA Today
high-tech reporter Bruce Haring, called
"Beyond the Charts," --
the first book to attempt to document
the ongoing drama of the MP3 movement --
I couldn't wait to read it.

Unfortunately, this isn't that
book. There is a certain futility in
trying to document a movement that is
still history in the making, and if one
thing is certain, the fallout of the
"MP3 revolution" is barely getting
started. But while other authors have
cleared this hurdle -- books are written
about the Internet all the time --
Haring doesn't get beyond the frantic
pace of the facts and into the more
thoughtful realm of ideas.

At a brief 165 pages -- of which fully
22 pages are a reprint of a speech by
Electric Frontier Foundation co-founder
John Perry Barlow -- "Beyond the Charts"
feels more like an extended essay than a
book. In fact, it reads most like an
especially long version of a newspaper
article: a kind of added-value
collection of the features you might
have already seen in the countless
publications that cover the MP3
movement. If you're looking for facts
about what's happened so far, this is
the book for you. If you're looking for
deep insights, though, keep waiting --
Haring has few.

"Beyond the Charts" opens with a gleeful
Michael Robertson, CEO of MP3.com,
landing an $11 million round of
financing, and closes with the MP3
Summit of the summer of 1999. In
between, Haring documents the rise of
the music format that materialized in
1997, sparked the imaginations of
impoverished music fans around the
world and has caused the record
industry headaches ever since.

By focusing primarily on the major
players and seminal moments -- from the
invention of the MP3 technology, to the
creation of SDMI, to the IUMA's
first downloadable tunes, to the
Recording Industry Association of
America (RIAA) lawsuit against Diamond
Multimedia and its Rio MP3 player, and
pretty much every battle waged by the
RIAA -- the book will at least satisfy
the cravings of those who want an
account of every twist and turn of the
MP3 movement.

Haring spends much of his book profiling
the mercurial Robertson -- documenting gratifying
details like the fact that Robertson
owns a mere six CDs and got exactly one
downloadable song out of the
multimillion-dollar deal he signed with
Alanis Morissette. Haring devotes a few
pages to WinAmp programmer Justin
Frankel, a few more pages to digital
music pundit Jim Griffin's early days inside Geffen
Records and a large chunk of the book
to the logistics of compression
technology and the legal decisions that
allowed the Recording Industry
Association of America to pursue its
online foes.

Yet despite these interesting details,
Haring's overall insights are few and
far between. The book feels as if it
were hastily assembled, produced through
a quick culling of Haring's notes from
industry conferences and a few in-depth
interviews with the bigger players.
Haring's strong suit is not his writing;
there are plenty of clunkers, like, "The
traditional record industry still felt
they had a slam dunk case. They would
soon learn that the new school was in
the house." But he does show a firm
knowledge of the history of the record
industry and its voracious appetite for
profits. This is a history that Haring
previously addressed in another book,
"Off the Charts," and perhaps
"Beyond the Charts" works best as a kind
of addendum to the earlier title.

The slim volume offers only a scant look
into the rich complications of the
record-industry history that has
informed the MP3 revolution as we know
it; the book begs for a closer reading
of some of the horrific deal making that
has kept artists and fans up in arms for
decades. New York Times music critic
Neil Strauss, for example, has done a
terrific job in feature articles of
diving into the world of disgruntled
musicians; Haring's book would have
benefited from a similar study of the
creative side of the record industry.
What about comparing the MP3 movement with
similar online revolutions, like the open
source movement? Or examining the
fans who are latching onto digital
music? Haring's book might have offered
a closer look at the subcultures, such
as techno musicians, that have driven
the MP3 movement or provided predictions
about what impact the MP3 world might
have in the future.

Unfortunately, Haring instead focuses
primarily on the digital music
entrepreneurs and record industry
executives: a boatful of
self-important men with CEO titles, and
one woman -- the beleaguered Hilary
Rosen, CEO of the RIAA. Despite their
importance in the deal making, these
folks don't offer much color.

"Beyond the Charts" does do a decent
job of documenting the biggest players
in the scene -- at least, the players
that existed as of November 1999, when
the book entered its editing cycle. But,
of course, things have changed
substantially since then, as they always
do in this industry. In fact, some of
the most momentous upheavals in the
digital music industry have happened
since his book was finished six
months ago: the rise of Napster and Gnutella, the Time Warner/AOL
deal that will pull Warner Music
and EMI under AOL's purvey, MP3.com's
multiple lawsuits with the RIAA,
Listen.com's partnership with all six of
the major labels, the "Internet music
broadcaster" WWW.com
coming out with the first online
licensing deal with the RIAA and the
advent of MP3 players in everything from
your car to your PDA.

Haring, for example, unquestioningly
cites an apparently seminal moment when
the RIAA's Rosen, speaking before a
crowd at the Jupiter Plug.In conference,
states that "piracy ... is really not a
significant concern" for the RIAA
anymore. Although Haring cites this as a
"stunning" moment that seemed to mark
the end of the RIAA's single-minded
pursuit of online music pirates, the
RIAA's actions in the months since his
book was published show that Rosen did
not live by her words. In late December,
the RIAA sued Napster for around $20
billion -- $100,000 for every song that
was "pirated" on the service -- as
perhaps the group's firmest anti-piracy
action yet.

Ultimately, Haring doesn't seem to have
much to add to the rafts of magazine
articles and newspaper profiles that
have already documented every step of
the MP3 revolution -- other than to
assemble all the data in one place. In
fact, the most insightful pages of his
book are the ones he didn't even write:
the 22 reprinted pages of Barlow's
thoughtful speech, offered up as a call
to arms at the MP3 Summit last year.

"We are dealing with a cultural battle
here between the forces of the
individual and his or her ability to do
with his or her mind as they see fit,
whether it be entertaining with music or
other things," Barlow explains, "and
it's also a battle about culture and the
culture of institutions, particularly
industrial institutions and the
individuals of the years to come."

And that, I'm sure, will be a subject
for another book in the years to come,
too. Undoubtedly other music journalists
are diligently working on books about
the same topic: If the publishing
industry of recent years has shown us
anything, it's that every twist of the
digital revolution will produce at least
a shelf of books. The MP3 revolution,
rest assured, will be no exception.