"The Invention of the Restaurant" by Rebecca L. Spang

You didn't know that it was invented, did you? A scholar unearths the unlikely origins. 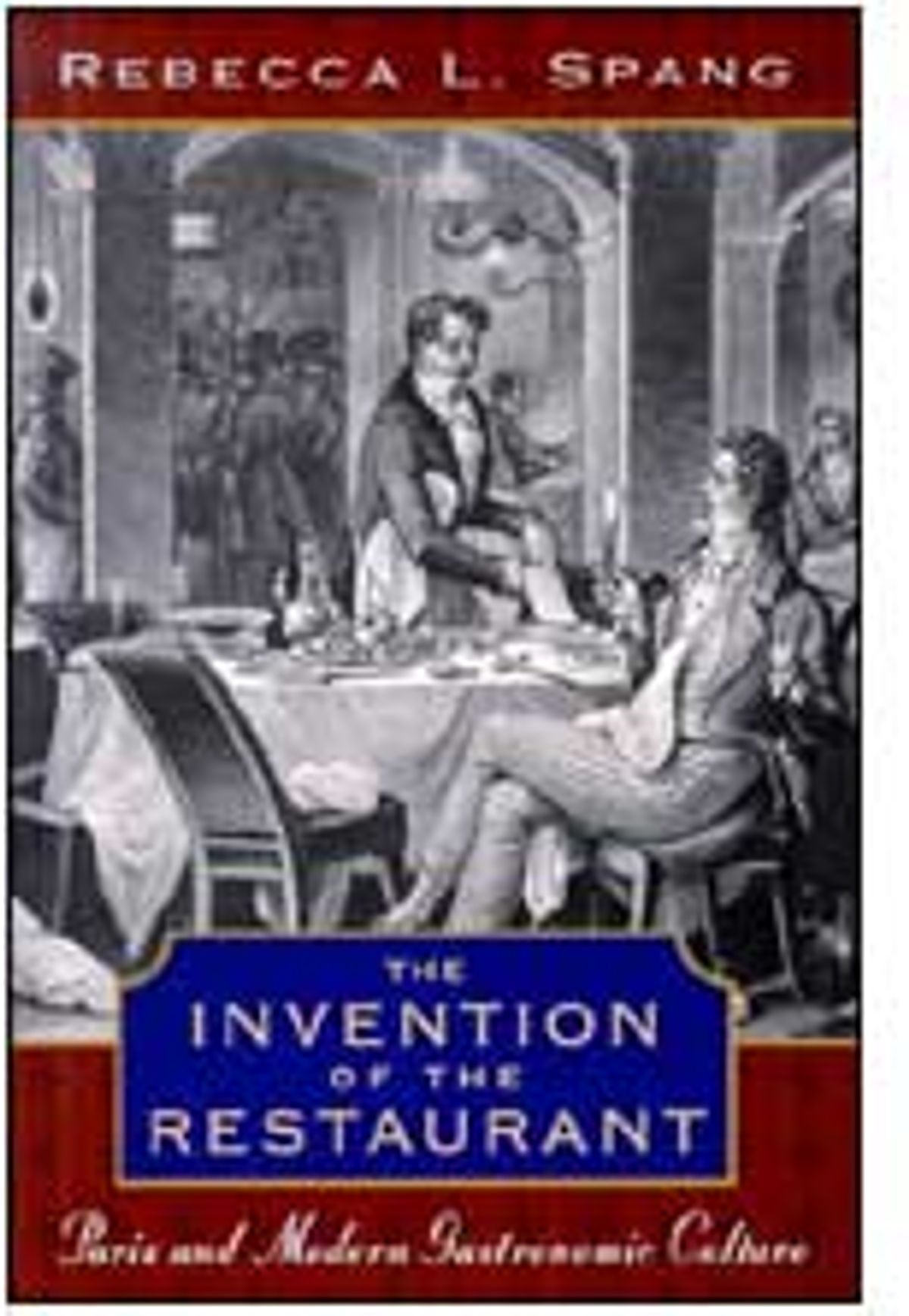 The title of Rebecca L. Spang's scholarly yet highly accessible social history, "The Invention of the Restaurant," causes a small jolt of surprise. For people who eat out so often that boiling a pot of spaghetti at home is a special occasion, a world without restaurants is hard to imagine. We realize, at some level, that they have not always been here, but few of us could say who invented them, or when. The automobile, the telephone, yes. But the restaurant, a creation every bit as characteristic of modern life as the other two? To most of us, its author is anonymous.

According to Spang, the forgotten inventor was Mathurin Roze de Chantoiseau, a figure so perfectly emblematic of his time that he almost seems like an invention himself. The son of a landowner and merchant, Roze moved to Paris in the early 1760s and began floating a variety of schemes he believed would enrich him and his country at the same time. He published a kind of early Yellow Pages, advocated a bizarre currency that would decrease in value each time it changed hands and, in 1766, opened an establishment in Paris that claimed to serve "only those foods that either maintain or re-establish health."

What Roze's projects had in common was a desire to improve circulation, whether the thing circulating was banknotes or bodily fluids. "The invention of the restaurant," Spang writes, "was but one component in Roze's plan to fix the economy, repair commerce, and restore health to the body politic." The earliest restaurants specialized in cuisine that seemed very progressive at the time: strong broths that, by extracting all the nutritive virtues of various meats and vegetables, offered nourishment without any of the hazards of solid food. There was no fiber to chew, no fat to digest.

By finding a scientific basis to the food they served, restaurants did their part in the Enlightenment's grand project of improving life through the careful application of reason. They also claimed to minister to those who suffered from "weakness of chest" -- a mysterious ailment afflicting people who boasted of refined artistic and intellectual sensibilities, for whom the sipping of delicate broths "served as a social marker, as a way to differentiate the sophisticated urbanite from the coarse worker capable of digesting whatever was placed before him."

Much of this information is ignored in the standard food histories, and Spang's excavation of it makes for interesting reading, particularly because the French Revolution and its aftermath would change restaurants almost beyond recognition, into something very like the places where we go out to eat today. By the early 19th century, bouillon sipping was falling out of fashion; in its place, restaurants offered just the kind of rich, decadent foods that would have sent the "weak of chest" into fits of asthma.

As the restaurants' broths ceased to be their primary attraction, they came to be distinguished from inns by their secondary characteristics. One ordered at will from a menu instead of taking what the innkeeper was serving. One was charged only for what one ate rather than a flat fee. One sat at a small table, alone or with acquaintances -- not with strangers at a large, boisterous table d'hote. This last innovation was perhaps the most significant: Setting restaurant customers off from one another at a little distance made it possible to watch and be watched, to eat in private and in public simultaneously. In a literal sense, it marked the birth of conspicuous consumption.

According to Spang, after the revolution the French launched on an eating binge so excessive that they felt compelled to justify their hedonism by turning food into a field for specialists. The creation of "gastronomy" transformed the restaurant from a social phenomenon into an object of aesthetic analysis -- into art as distinct from life. This development led, Spang argues, to the perception of the restaurant as an intimidating temple that could be appreciated only by a priestly caste of illuminati. Spang's ambitious goal is to reclaim restaurants from the clutches of gastronomy.

One of the many virtues of "The Invention of the Restaurant" is that it takes as its unlikely hero Roze de Chantoiseau rather than any of his more famous successors whose establishments may have offered better eating. Because restaurants were just one of Roze's many ventures, Spang sees him as a prelapsarian figure whose very lack of expertise makes him preferable to the specialists who would later control the restaurant world. Spang might have noted, however, that restaurants have climbed down from their pedestals in the past few years, and now walk among the people. The modern American restaurant seduces its audience with movie-set design, stage lighting, celebrity chefs and themed menus. Like many other things in this country, restaurants are a branch of the entertainment industry. It's a transformation that the entrepreneurial Roze would have appreciated.