My sexologist date put me in a leather sling, in the hopes of inducing the elusive female ejaculation. 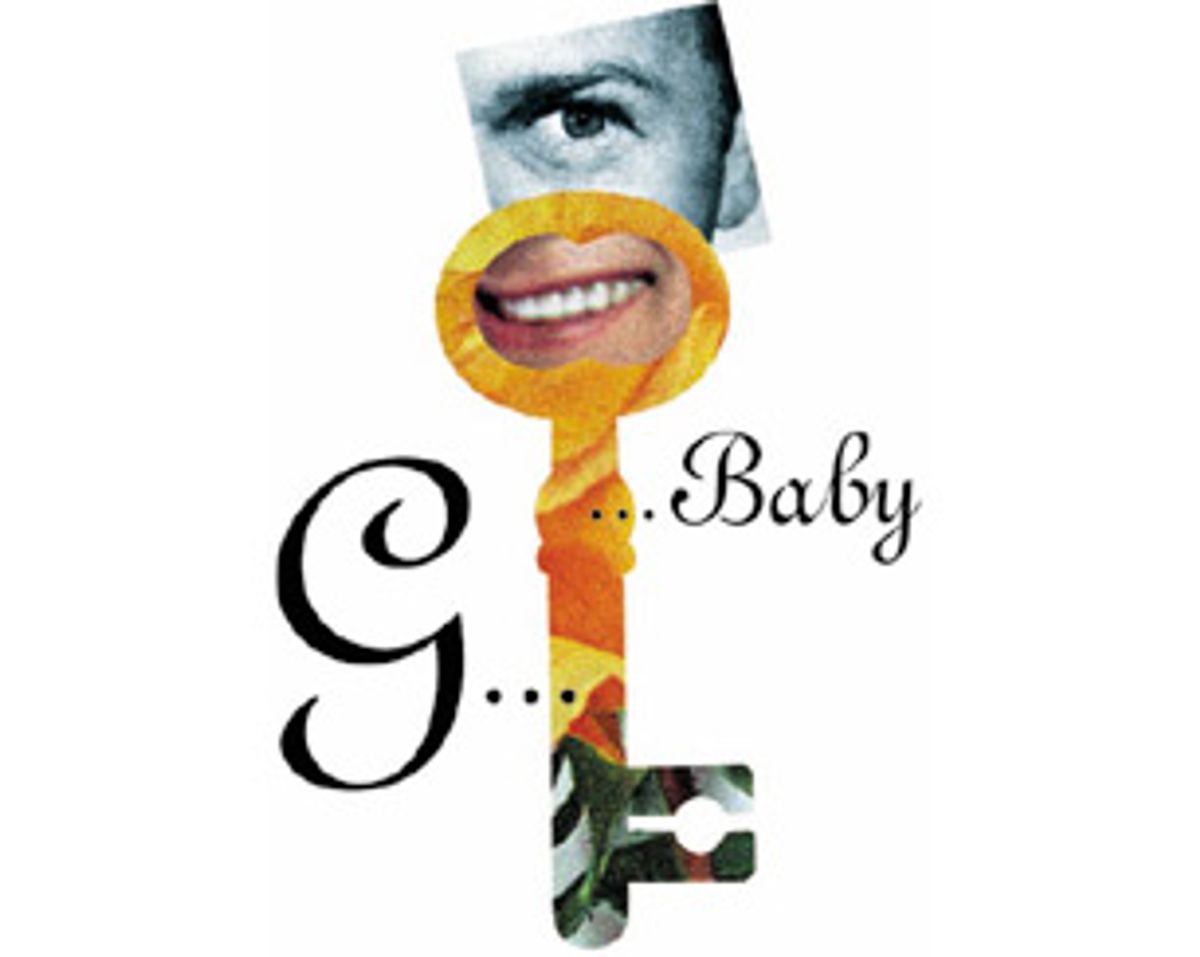 I am on my way to see my new lover, the
licensed sexologist -- naturally, he
lives in
Marin -- and I think of all the
schlepping I'm doing just to get laid.

It's
going to be a three-bridge day -- Bay,
Golden Gate and Richmond. And I have
to bring my own lunch, if you can
believe that. The guy, the man, the
squeeze, the love king, eats only meat
and fruit. End of story.
Or rather, it should be, considering who
I am, I who can't think of eating
without schtupping or vice versa, doing
it with a man who wasn't an
omnivore
and susceptible to my wild cooking.

So many reasons not to, but they all
fade just thinking of how good it
was the first time after so long
without. This is therapy, I tell
myself,
from the man who can.

And from the very beginning when I
talked to him on the phone, when he
was a blind-date guy calling because
so-and-so told him to look me up, he
started bragging about how good he was
and how all his exes were still
friends with him -- even still fuck
buddies, and why didn't I call some of
them
for references, which, he assured me,
they would happily give me. It was most
bizarre. A full-fledged narcissist, I
thought, especially when he said this
about himself: "I've been told I'm good-looking."

Well who hasn't been, but God, you don't
pass along your compliments.
Flattery like that has a short shelf
life, limited to the receiver.

I said, "Look, I'm menopausal,
overweight and not the glamour puss I
used to be." I made myself sound really
ugly.

"I think it's what's inside that
counts," he replied.

When he showed up at my door, I noted
with much mirth that he looked a
lot like me. Yeah, I found him
attractive, but let's not go there.
First date was coffee and more bragging,
especially about his favorite subject:
The G crest, which is the more proper
term for the G spot, he would explain. He
was
into this tantric stuff of stimulating
the G crest -- a ridge, he said, on the
roof of the vagina that, when properly
and (devotedly) stimulated, led to an
orgasm he swore produced a female
ejaculation.
Women ejaculate? Huh? He swore it was
true. He'd show me if I liked.

As a sexologist, he'd explored all this.
I was willing to try. He
was, he said, nonmonogamous, and a
totally committed practitioner of safe
sex, a nonlying, not deceitful, full
disclosure kind of lover. He was looking
for a
serious relationship with someone who
was as committed to sexual pleasure as
he
and willing to accept his, ahem,
lifestyle of multipartners. I didn't
think I could go that far, but as vulgar
as I found his bragging, I admit I
was more than willing to sample his
wares.

Our first time together, though strained
(he hated cats and wanted me to
lock them away, which I did, but their
pitiful wailing definitely got in the
way of my pleasuring), was more than
promising in the pleasure department,
and
so I agreed with alacrity to come to his
digs, where we would not be
interrupted by domestic animal concerns.

A tantric sling. It hangs from there.
He points to a substantial hook
hanging from the low-slung ceiling. "Didn't want to intimidate you," he
murmurs unctuously as explanation for
why he hadn't hung it up.

I am bold. Sling it up. I want to see
it. It hangs like an egg drop off
the lip of a spoon, ovule in shape, but
open because of the filigree leather.
He explains: "You lie back in it, your
feet in leather stirrups. It's very,
very comfortable for you, you're
completely supported. And I can fuck for
hours like this, just pull you back and
forth."

But we ignore it for now. We move to the
bed. We're on the bed. His
tongue is forever. But everything of
mine hurts -- hips, back, shoulders.
I've
left out the part about me swimming in
the bay each day, training for a New
Years Day swim in frigid waters that
leaves my joints aching after training.
I'm a schwimmer, and everything hurts.

I ask again how comfy it is, hanging
there across the room.

You get in first, I tell him.

He gets into it, a mesh of broad straps
that cocoon the body. Slips his
feet, heels down into the stirrups.

It looks fetally comfortable and I am
overcome with excitement and
curiosity to try it.

I am all spread-eagled with my zorch
reflected across the way in the
mirror, mocking me with its open mouth.
I can barely stand it -- except, as
promised, it's totally comfy. I close my
eyes, but not before noticing his
dressing up of his schlong: first the
condom, then the cock ring. Oy vay.
Such utensils, I think.

He's done my clit on the bed. Now he
enters. Slowly, he pulls on the
straps above me, and the tilt of me in
the sling
rubs and presses my urethra from
underneatha. I'm panting. I'm
clenching.
Breathe out, he says. Push out. He's
my coach.

Whaddyamean, let it go! Pee, on the
floor?

He grabs a towel and pushes it down into
the sling, under my ass.

"Pushing out is how you have this
orgasm. You're ready to ejaculate."

I don't mean to quibble, but I'm sure
it's pee. Worse, it feels almost
painful, as if I had cystitis. I want to
stop. He does, and helps me down
out of the sling.

I pee. Come back. We start up again. And
once again, I'm out of my mind
it's so exciting. He plays with me as
he says, "I can take you higher."
And then he backs off. I am strings in
his hands, and he frets me as he
pulls on the leather strips of the
sling.

And so it went for hours. But
always, I have to pee, and despite
his urgings to let it go, I cannot. I
wasn't raised to be incontinent by
choice! I'm tight-sphinctered, I admit
it.

On the last bathroom pass, I look at the
time and gasp. I'd been there
since noon and it was pushing 5
o'clock. I'll have to try the pee shoot
another time.

"Omigod," I wail, "I'm due at my best
friend's house for a cocktail party
I promised I'd attend!"

"I have a party to go to myself," he
owns, not to be outdone.

I fly across the last bridge, the
Richmond, on my way to the Berkeley
hills. She'll never forgive me, I think,
as the hour nears for the end of the
party in honor of an English guest whom
I knew and liked.

I go straight up to her house at the
exact hour published as the party's
close. I'm breathless. She opens the
door and I see people still there,
thank God.

"What happened to you?"

"Well, the important thing is, you're
here now."

Kate Coleman is a writer living in the San Francisco Bay area.