When the revolution comes

We asked for grand plans and we got more than a few. 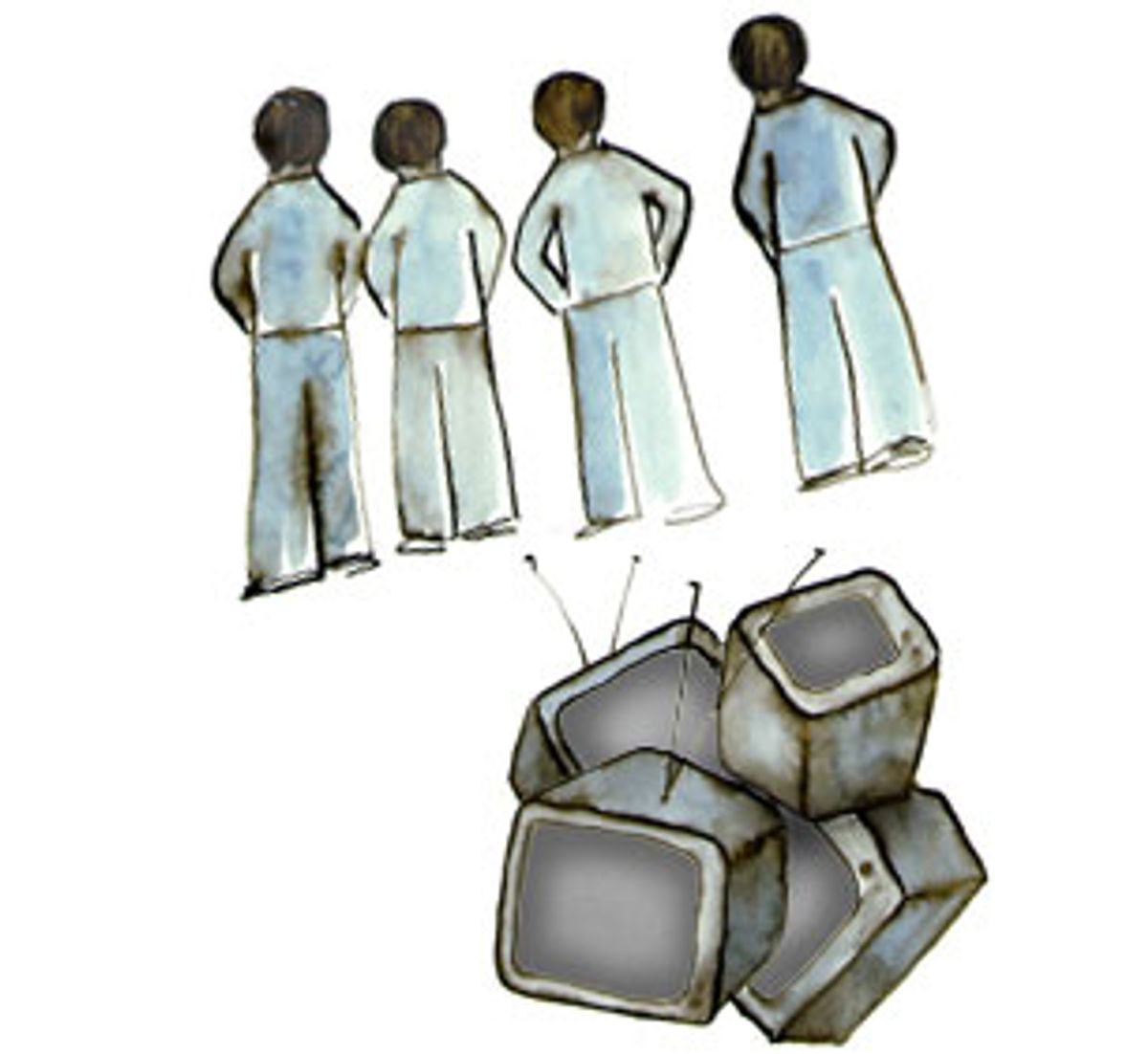 As a final flourish in our Family for Sale series, we invited readers to weigh in with their own grand plans, brainstorms or blueprints for a better way.

We said: "In a perfect world, what would be the rules about advertising and kids? Marketing and school? Merchandising and publishing? What is wrong with the picture, as it is painted now by others? How would you fix what is broken if someone finally gave you the cosmic tool belt?"

Today we give you the results -- handpicked from many missives -- of this exhortation to action. And we would like to thank everyone who sent us something on the subject.

Dave Modrow: It seems to me that the greatest pressure to buy this or that toy for kids comes not from advertising but from peer pressure. Many parents feel forced to buy a particular toy or clothing item for their children because "all the other kids have it" and their kids will "feel left out" if they don't have what "all the other kids" have.

One way to combat this pressure would be for the parents in a neighborhood or school district to meet and agree in advance on what toys they will and will not buy for their kids. Such a group could not cover all buying decisions, of course, but they could at least come to a decision on the most expensive items, the latest big thing or overhyped fad.

I know this sounds like an ungainly process, but I also know that when I was a kid, my parents were in regular contact with my friends' parents, and they kept each other informed of our actions; deciding what toys to get us would have been relatively easy.

Whatever they are selling, the marketing weasels depend on division and isolation to prevent their targets from seeing through their manipulative hype. This is why the entertainment industry glorifies lone heroes and not collective action to solve problems. The simple act of meeting and conferring with others on any issue is, therefore, revolutionary in its effect.

Neel Krishnaswami: Reading your series, I was struck by a single common thread: No one seems willing to accept that people may have some responsibility for what they buy and how they spend their time.

If you think that television is dominated by banal and stupid programming and hard-sell advertising, then don't watch it. It's not hard -- I hear there's this device called an "off switch" that comes attached to every television. No one will arrest you for not watching television; most likely, no one will even care.

Your child does not have control of your pocketbook -- you do. If you feel forced to waste money at Baby Gap and Toys "R" Us, remember that you went to the store, you picked up the schlock and you paid the money. You have full power to say, "Screw this," and walk away. If you don't, it's because you chose to spend the money.

There are plenty of charities, amateur musical groups, community groups and open-source-software projects that would be overjoyed to have someone willing to spend as much time volunteering as they do watching television.

I make no moral judgment here: How you spend your time is your business, not mine. But don't expect me to feel guilty about how you spend your time, and definitely don't expect me to support laws to forbid everyone from making the decisions you consider vices. In short, stop trying to "protect" me from advertising -- I don't need or want your condescending paternalism.

Full disclosure: I don't work for an advertising company, I don't own a television, I don't have broadband Internet and I don't care about you.

Neil Grant: Break up with your TV. Sell it, set fire to it or beat it to death with a stick. Advertising is the raison d'jtre of broadcasting. Would you invite the Antichrist into your home?

Doug White: Assuming that the government is overthrown by a small, well-armed militia group who installs me as a benevolent dictator, I would take several steps against the marketing machine that is turning American consumers into sheep.

The first thing I would do is ban any company that markets to teenagers from creating advertising which implies that owning their product is an act of rebellion after more than 50 percent of a sample of teenagers have been found to own the product.

Also, any music artist who sells more than 500,000 copies of an album on which more than half of the songs were written by someone else must release an album of original songs. An E.P. would suffice.

Any show with a target audience younger than 12 should have no commercial breaks.

Finally, MTV should be shut down, and all their executives, content managers and those veejays should be stoned to death.

Amy Benson Brown: "The revolution will not be televised -- the revolution will be live" is the refrain of an old Gil Scott-Heron song that sums up my hopes for combating the ubiquitous presence of marketing in the lives of American families.

We've got to be there -- alive in the moment when advertising enters our preschooler's or toddler's consciousness. Better yet, we've got to get there first. In a perfect world, moms and dads aren't always cooking, checking e-mail or doing the laundry while their preschoolers are fed a stream of images designed to nurture the consumer within. It just might rob consumer culture of some of its tremendous power if we talked about it as a problem openly and early with our kids -- just like we do with issues of violence, drugs and other things that threaten our bodies and souls. It's not a high-tech solution or an expensive one, but I have reason to think it does at least a little good.

Sitting on the couch on a ordinary afternoon last fall with my 4-year-old, I had a small moment of victory over the forces that fill my mailbox to overflowing. Talking back to a commercial, my daughter cocked her head and said suspiciously, "They're just trying to get us to buy something we don't really need."

Rob Freeman: High-effort activities are key to the revolution. Say "yes" to playing an instrument, studying martial arts, learning to draw or paint, just getting out and doing anything active. You must keep in mind that things take time to master, that learning something worthy requires being a beginner. One must be able to accept being a beginner at things. Too many of us have such fragile egos, and don't take things up for fear of being a beginner.

The admen have gotten the better of so many of us because they have taken advantage of our passivity. The Soviets had their ideal "New Soviet Man," and the corporations no doubt have their ideal American consumer. The "New American Consumer" works long hours, has little time for hobbies and, when he or she does have time for recreation, goes to Disney World or to the movies. The "New American Consumer" owns a new car, follows televised sports and over the years has developed an extremely narrow, stilted mind, and hardening arteries. His or her health is deteriorating, and he or she will turn to expensive pharmaceuticals to stay alive and in functioning health.

Do everything possible to do the opposite of the "New American Consumer." Stay healthy, drive an old car or no car at all, limit media use, don't waste time on computer games. Realize you have a finite time of life; use it well. Take up one or more high-effort hobbies, and realize that it's not so terrible to be a beginner. You will find that the condition of being a totally raw beginner doesn't last that long in almost any endeavor, and eventually you will lose this irrational fear.

And if you are a parent, this program applies all the more. You must lead your children by example.

Omri Schwarz: It's a shame there's this pesky Constitution forbidding [a ban on advertising]. But after the revolution comes, that won't be an issue, right?

1. No adverts of any kind would be allowed during children's TV programming.

2. There would be no adverts for children's TV programming.

Now, nobody will produce children's programming without some desire to tell kids something meaningful. Of course, under such a system no kids would watch television.