First-time director Mark Hanlon may have watched "Eraserhead" too many times, but he sure knows how to sustain a mood. 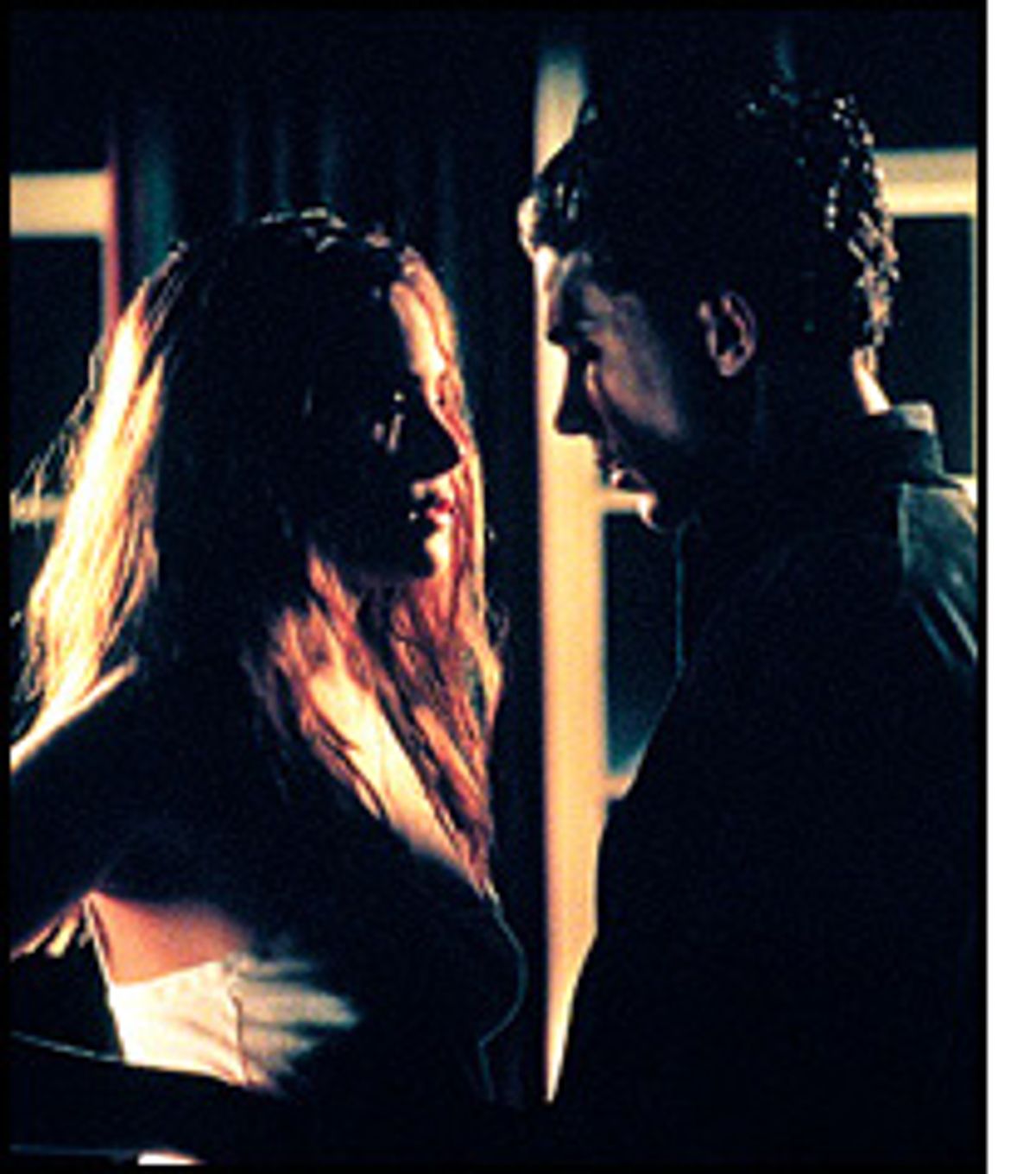 It seems gratuitously cruel to trash an ambitious independent film that has little chance of reaching a large audience, even if it is kind of an incomprehensible mess. So let's at least credit "Buddy Boy," the first feature from writer/director Mark Hanlon, for the courage and daring that are clearly its finest accomplishments. It wants to be about love, madness and the nature of religious faith, yet it also has more practical questions in mind: Can vegans be cannibals? How many times can a guy break into his girlfriend's apartment brandishing a weapon before she will have had enough? If the result of all this is a mannered, pretentious mishmash, in which several talented actors are abandoned to wander around frothing at the mouth, it's just interesting enough to suggest that Hanlon has a far better movie in him somewhere down the line.

"Buddy Boy" is the story of a stuttering, tormented geek who rarely leaves his stepmother's apartment -- at least I think it is -- and it creates and sustains its own distinctive mood, larded with flashes of black humor. That mood is a lot closer to the dream state, or perhaps schizophrenia, than to the supposedly edgy, this-is-how-it-is naturalism favored by almost all first-time filmmakers these days. My guess would be that Hanlon has watched David Lynch's "Eraserhead" way too many times -- return that video to the library, young man! But it's nonetheless refreshing to encounter a young filmmaker whose taste runs to more esoteric fare than "Reservoir Dogs," "Blood Simple" and "North by Northwest."

There are no snarky discussions of pop-culture topics or Eastern philosophy in "Buddy Boy," no mislaid suitcases of gold bullion or murder plots gone wrong, no sense that the filmmaker is perched on a cloud hoarding his cardboard thunderbolts and smirking at his inferior creatures. In fact, there may be no world at all outside the troubled mind of Francis (Aidan Gillen), a photo developer who lives in a tenement apartment somewhere in a nameless and apparently timeless American city. (While the clothing looks contemporary, Francis' lair features no TV remote or touch-tone telephone.) After he gets home from work, Francis fixes dinner for his drunken, moronic stepmom (Susan Tyrrell) -- sometimes it's a canned meat product called SMEAT and sometimes it's cat food -- and, if he's lucky, jerks off while watching a beautiful woman (Emmanuelle Seigner) undressing in an opposite apartment.

Numerous films have of course been constructed around the idea of voyeurism -- chief among them Alfred Hitchcock's "Rear Window" and Michael Powell's "Peeping Tom" -- and by now it's Film Criticism 101 to claim that spying on someone is some kind of metaphor for the act of watching a movie. Even if Hanlon is mining this dubious psychological territory one more time, it isn't his main concern. "Buddy Boy" owes its allegiance to a far more obscure, even symbolist school of cinema, one that's drastically out of fashion at the moment. Besides early Lynch, Hanlon has an obvious affinity for the Roman Polanski of "Repulsion," the Nicolas Roeg of "Don't Look Now" and maybe the Martin Scorsese of "Taxi Driver" (but not "Mean Streets"). In other words, if you're one of those viewers who like to have an hourlong, double-cappuccino-fueled discussion right after the movie, you've found a kindred spirit.

To me, the films on that list -- even the supposedly immortal "Taxi Driver" -- look increasingly like relics of the art-damaged '70s, receding in the rearview mirror. But they're brave choices all the same, and their spectral presence hovering over "Buddy Boy" makes it clear that Hanlon is willing to walk a stonier path than most young filmmakers.

As much as I want to cut him some slack, however, bravery is not always enough. The unsettling REM-sleep rhythms and accomplished, underlit visuals of "Buddy Boy" don't really make it watchable. Its characters and story aren't even remotely believable in our world, but Hanlon also fails to create an alternate universe where they're at home, as Lynch, Polanski and Roeg would have done.

Gillen, an Irish actor best known for his role on the hit British TV series "Queer as Folk," brings an impressive array of tics, twitches and stammers -- along with an impeccable Yank accent -- to his role as Francis. Still, it's the kind of acting you look at, nodding to yourself, and say, "That's some damn fine acting," without really having a clue about what he's driving at. With his permanent bed-head hairdo and mopey expression, Francis is a generic shut-in mama's boy; even the alcoholic priest (Harry Groener) who visits his stepmother advises him to get out and commit some sins so he'll have something to confess besides masturbation. We're supposed to think that the pious Francis feels tormented by lust and abandoned by God, but maybe his real problem is that he's trapped in a willfully obscure art film that makes sense only to its creator (if indeed it does).

Some viewers may find Sal, Francis' stepmother, to be a hilarious, nightmarish creation; to me she's nightmarish, period. Apparently unhindered by any direction from Hanlon, Tyrrell (a veteran of many fringy roles, from "Andy Warhol's Bad" to John Waters' "Cry-Baby") simultaneously channels "Streetcar's" Blanche Dubois and Bette Davis in "What Ever Happened to Baby Jane?" She's a chain-smoking, liquored-up, shrieking harridan with what looks like a dead poodle on her head. It's no surprise that Sal invites Vic (Mark Boone Jr.), the cheerful, beefy plumber who may or may not have shown up on a legitimate repair job, to hang around and party in her and Francis' dank, cavernous apartment; the only mystery is why he'd want to.

When the willowy Gloria actually meets Francis, who has been eagerly ogling her from afar for weeks, she finds him irresistible. "I can't seem to bring myself to close the blinds," she purrs suggestively. Well, sure -- he's paranoid and ill-tempered, is locked into a sadomasochistic relationship with his ailing stepmom and can hardly utter a complete sentence (for that matter, when he can, it's about Jesus). What's not to like? All the actors in "Buddy Boy" face thankless tasks, but Seigner (Polanski's wife, which is surely not a coincidence) has the highest mountain to climb and the least ability to climb it. Then again, Gloria's enigmatic character is only heightened by the fact that you can't understand Seigner's English half the time. She tells Francis she is a vegan because animals feel pain: "Any moles fill pen, zhoost lak widow."

By the time Francis becomes convinced that Gloria is a murderer and a cannibal, to which accusations she responds that she loves him and always will, "Buddy Boy" had pretty well lost me. Purely as a visual and auditory experience, a drifty dream full of recurring images -- an impassive child who stares at Francis every day on the bus, a little girl with a bruised face he keeps seeing in the photos he processes -- it remains a remarkable experience. From the moody cinematography of Hubert Taczanowski (somewhat in the who-turned-out-the-lights vein so popular since "Se7en") to the impressive blend of electronica and Latin music put together by music supervisor Billy Gottlieb, including several original Brian Eno compositions, the combination of technical skill and ambition on display here is impressive. Now the question is whether Hanlon is willing or able to use those resources to dig his way out of the aesthetic, commercial and philosophical dead end that "Buddy Boy" represents.