Rape, robbery and anguish in the new South Africa

I was arrested for fighting apartheid, but what good is freedom if rampant violence terrorizes blacks and whites alike? 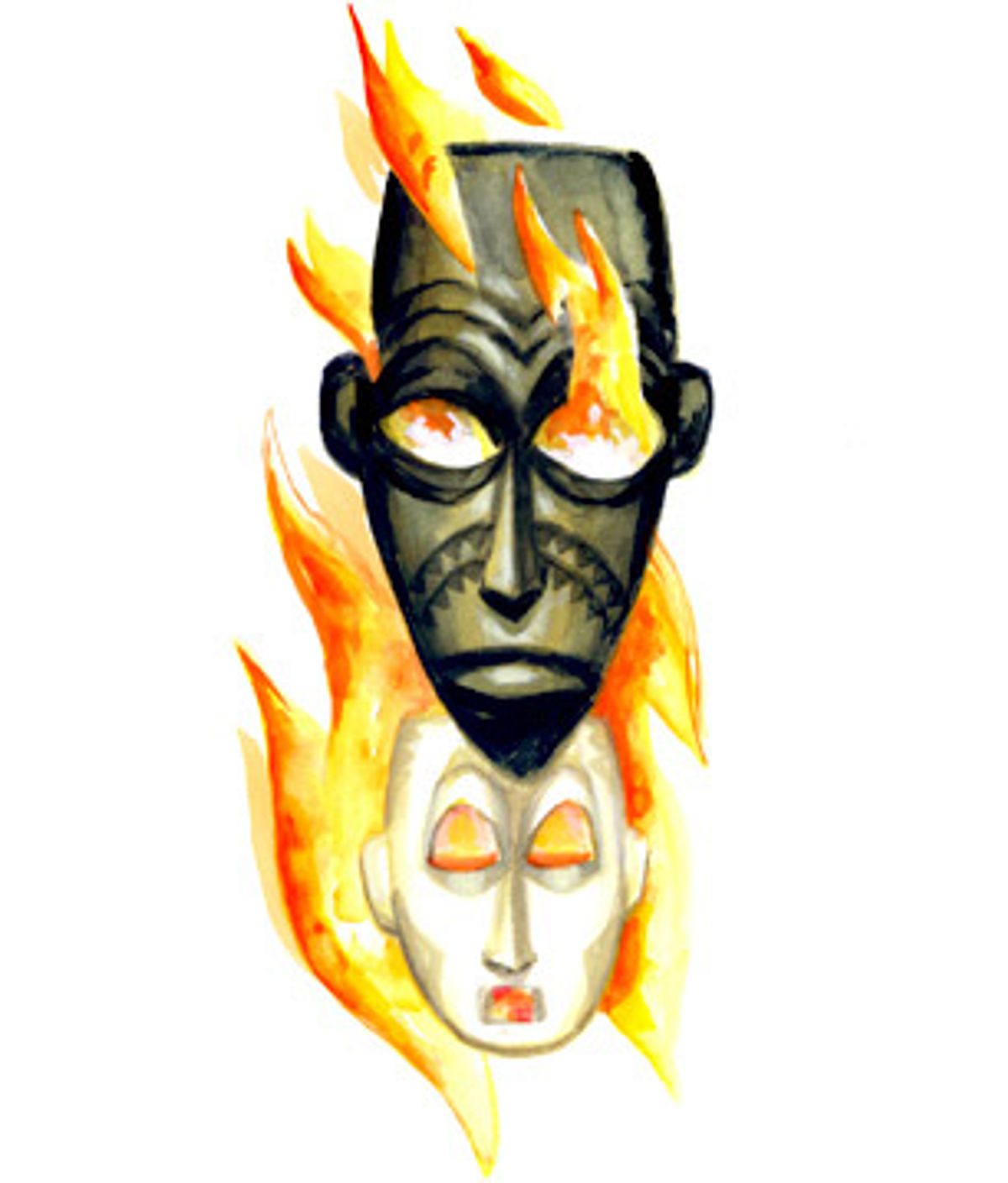 A ringing telephone at 6 a.m. will jangle the nerves, especially when your whole family lives, as mine does, in another time zone. And my mother's voice on the line that October morning was peculiarly high and tinny, not only, I realized, from distance -- calls from South Africa still sound as if they're echoing through interstellar space -- but also from hysteria, barely contained.

"Everyone's all right," she said at once, as she always does (code for no one has died) "but Ben and Annie have had a horrific experience." I braced myself for a tale of burglary, perhaps even mugging, since my brother Ben and his wife, Annie, live in high-crime Johannesburg -- a place where, at parties, hosts hire security guards to walk guests to their cars; a place where drivers run red lights for fear of carjacking; a place where gangs rob bank trucks by blowing them to bits with AK-47s and then looting the wrecks.

But as I listened, with a creeping sense of dread, I realized that something far worse had happened. Not only to Ben and Annie, which it certainly had, but also, in a minor key, to me. To me and my stubborn complacency about South Africa after apartheid -- the "new South Africa," as it's called there, always in quotes.

Here's the short version, which is what I heard from my mother that morning, over a year ago (details came slowly, over the next few days). Ben, who's 37, had come home from work that night after midnight. He works in arts management, so late nights at performances or events are part of his job. Annie, his 29-year-old wife (or bride, as I still thought of her, since the last time I'd seen them was at their wedding that March) was asleep at home, a modest townhouse in a gated suburban complex, typical for young, professional, but not particularly affluent white South Africans. As usual, Ben drove his car through the electronic gate and parked in the lot. He was walking the few hundred yards down the path to his door when somebody emerged from the darkness behind him and thrust a gun to his head.

Although Ben immediately offered up his wallet and car keys, three young men with guns forced their way into the house, proceeded to rape Annie (in Ben's presence, à la Clockwork Orange), pistol-whip both of them, tie them up, gag them and torture them intermittently for the next five hours. During those hours, having bundled Ben and Annie into duvets so they couldn't see, breathe or move, the intruders robbed and trashed the place at their leisure, pausing only to cook themselves a meal and drink all the liquor in the house.

Quite a party they threw themselves, apparently, interrupting it now and then to threaten Ben and Annie with death if they so much as coughed (which, given that they had towels stuffed into their mouths, was hard to avoid). At some point in this very long night, the men left, loading Ben's car with everything they could lift, but Ben and Annie, not knowing if their assailants would return, or if all of them had indeed left, waited until they heard birdsong before daring to move.

A horrific experience by anyone's standards. But hardly uncommon in Johannesburg, which now has one of the highest rates of violent crime in the world. The murder rate there is about nine times that of the United States. A rape occurs every 10 minutes in South Africa today, and a violent housebreaking is so common that it doesn't even make the papers and is only perfunctorily investigated by the police, who, outnumbered, overworked, undertrained and often corrupt, hold out no hope of solving it (or the thousands like it). The only noteworthy aspect of this case, apparently, is that my brother and sister-in-law weren't killed.

Something else worth noting: As my mother narrated these events, she didn't -- as far as I can recall -- specify the race of the three young men. She didn't need to. I took it for granted, correctly, that they were black. The overwhelming majority of violent crimes in South Africa, against people of all races, are committed by black offenders. Blacks are, of course, the majority in South Africa, but their involvement in violent crime is still vastly disproportionate to their numbers.

Random violence, rape, robbery can erupt into anyone's life, no matter where you live or who you are -- we know this only too well in the United States. But this incident, this South African statistic, struck me with a peculiarly bitter poignancy. Not only because family members were involved, though obviously for that reason. Not only because of the unfairness of it -- my brother worked for the racially integrated Market Theatre in the 1980s and returned to Johannesburg from London in 1991 to become part of the "new South Africa" -- because violence is always unfair. (And class privilege is still class privilege, however clean its conscience and its hands.)

No, what I experienced was a different, more complicated kind of confusion. As I listened, in the October pre-dawn, to my mother recounting these events, I thought I could detect in her voice not only shock, not only pain, not only disbelief, but a shrill note of vindication. My mother is a native-born South African, profoundly, reflexively, candidly racist. For as long as I can remember, she has been telling us, her children, that "they" are out to get us, that "they" will break into our houses, "they" will beat us, rob us, rape us.

And now "they" have.

The first thing I did after hearing this news was call a close friend, a fellow South African expatriate who lives in New York. Attempting a tone of world-weary irony, the tone with which, like mental tongs, we've been passing bits of political information to each other lately, I said: "Want to hear a bulletin from the 'new South Africa?'" I don't know why I was trying to sound blasi, nor why I imagined I could. My friend later told me that, as soon as she heard my voice, she thought someone had died.

The next thing I did, numb and blank as if stun-gunned, was wash and dress for work, put lipstick on my bloodless face. Still numb, I headed out of the house to the subway, remembering, as I passed the bank, that I was flat out of cash. At the bank door, a panhandler stirred in his nest of newspaper to ask for change. I glanced down at him. He happened to be black. "Why should I give you anything," I thought, viciously, before I could stop myself. Inside the bank, as if in retribution, the machines were down. I went over to someone's desk, the manager's, I think. "May I help you?" he asked. "I need ..." I said. Covering my face with my hands, I burst into tears.

So now "they" have -- have beaten, robbed, raped -- and where does that leave me? Since, as a child, I first began to be prickled by doubts about the way we were living -- "But why does the maid live in a room in our backyard and her children live somewhere else?" -- I've resisted my mother's racism, her birthright (and mine) as a white South African. Resisted it, often, in confused, inchoate ways indistinguishable from acting out, but resisted it nonetheless. I've spent years outing my mother as a racist so that I didn't have to be one -- though of course (see above) I am.

I left South Africa in 1978 because I didn't want to face long-term jail or house arrest, like so many of my friends, but the truth is I would have left anyway. You didn't have to do much to be arrested in those days: You just had to speak against apartheid, demonstrate against apartheid, write against apartheid, all of which I did, and was duly arrested for. (And then arrested again when I returned, 13 years later, as a reporter, to the wrong place at the wrong time: a large demonstration in central Johannesburg which the police broke up with machine guns and dogs.)

All these years -- as an angry adolescent, as an anti-apartheid activist, as an exile separated from family and country for 13 years and as a writer -- I have labored hard to prove my mother wrong. I thought, finally, that I had -- that history had. But now, with the violation of my family, I see that she has, in a sense, been proved right. Right for all the wrong reasons, perhaps, or for reasons more complex than she could ever acknowledge, but nevertheless, in a sense, right.

So now I wonder, what does that make me? Wrong? How, I wonder, are my smug political certainties, forged during the anti-apartheid struggle of the '70s and '80s, going to accommodate the violent reality of post-apartheid South Africa? And if my mother and I could ever talk about this, what would I say?

A few days after my mother's call, I managed, finally, to get Ben on the phone. He and Annie were staying at her sister's house, Annie under sedation but still crying all the time, unable to be left alone for a second. In a tone of grim composure, he narrated the whole story, the exact sequence of events, of which I'd heard only fragments so far, flashes, with dark, terrifying stretches of the unknown in between. Even though what he told me was heart-sickening, it was somehow better to know all the details, not to have to imagine them, as I had tried to do over several sleepless nights. Now all I had to do was assimilate them.

I had also forgotten that Ben is severely claustrophobic -- won't even enter an elevator -- and so, in being gagged and hooded, swaddled and bound, for several airless hours, he was, along with all the other terrors being visited upon him, making his own private trip to George Orwell's Room 101.

Two things pained me the most, though, two things that he said. In that same tone, measured but grim, he kept repeating, over and over again, that he could never have imagined such terror, "Just sheer terror, Jen -- being afraid, every single second, that you were about to die." He also, as he told his story, kept saying, almost matter-of-factly, to establish chronology, "That was before they raped Annie," or "That was after they raped Annie."

To hear those words coming out of my brother's mouth, referring to the woman he'd so recently married with such joy, cut me to the core. Those words made it all real, irreversibly real, allowed me to glimpse, like a parallel universe of pain, what the statistics must mean: 62 murders, 73 attempted murders, 136 rapes, 174 armed robberies and 606 assaults on an average South African day. On a single warm Johannesburg night.

Tips for tourists from the South African police:

Jenefer Shute is the author of the novels "Life Size" and "Sex Crimes." She lives in New York.