All this useful beauty

The hottest art show in America is never better than Tom Cruise in his underwear. Wouldn't a nice Kate Spade handbag be so much more practical? 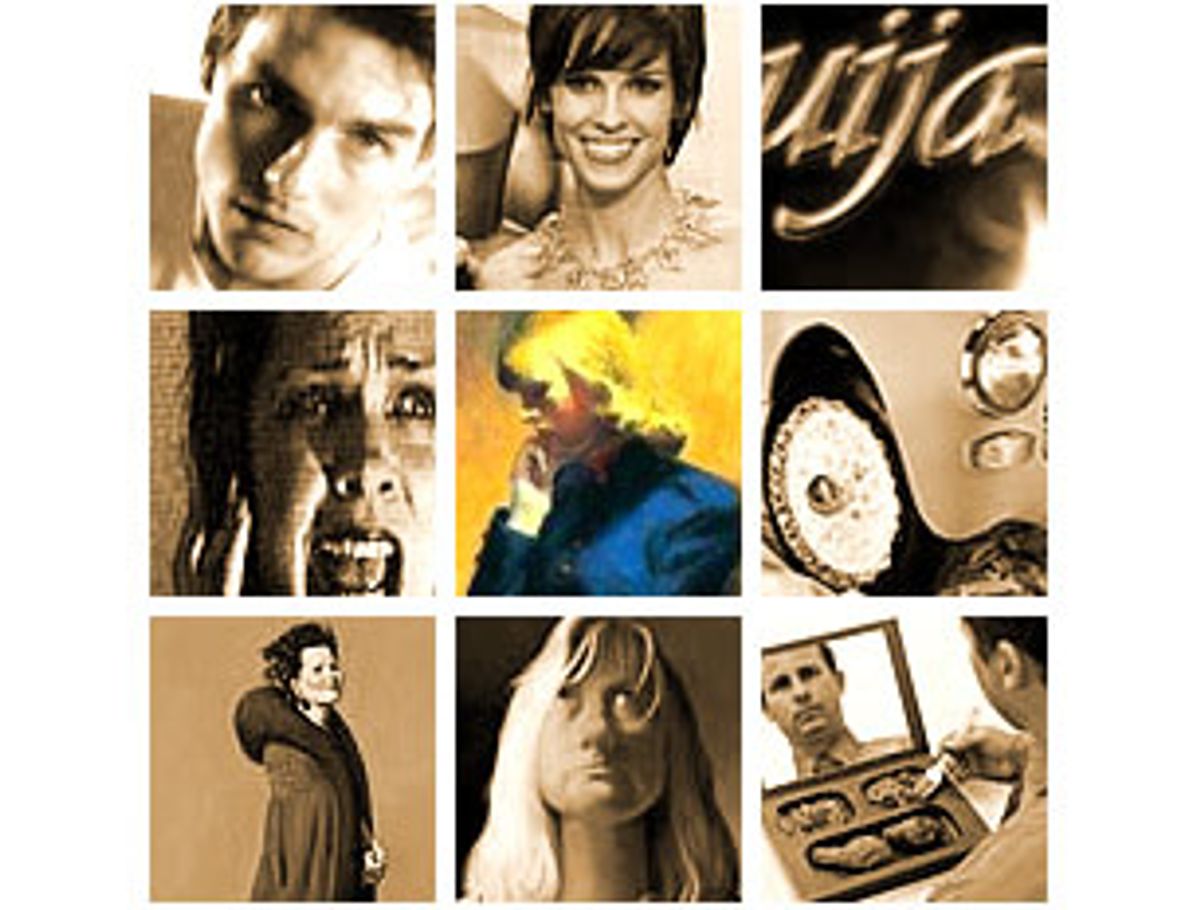 Seeing the new Whitney Biennial is like struggling through some interminable Jackie Chan movie -- minute after bleak minute of watching a bunch of cartoon characters dork around. If this museum show collects the best American art has to offer at this moment, then the American century really is over. Good thing the Whitney owns all those nice old existential Edward Hopper paintings it keeps trotting out every few months -- it's going to need them. I didn't learn anything, wasn't moved and only smiled once at the biennial: at Paul Pfeiffer's "The Pure Products Go Crazy," a digital video loop (alluding to William Carlos Williams' line that "the pure products of America go crazy") of young Tom Cruise humping the couch in his tighty-whities in "Risky Business."

The delight of seeing Cruise flail around only underlines the biennial's misfortune. Opening four days before the Academy Awards, which, for the first time in recent memory, honor an embarrassment of film riches, the exhibit makes one wonder if this is simply a season of moving pictures, not hanging ones. Except that 15 blocks north of the Whitney, the Smithsonian's Cooper-Hewitt National Design Museum is hosting its first triennial, "Design Culture Now." Where the biennial seems pointless and stale, the triennial is full of surprises. If painting and sculpture seem to be enduring some kind of crisis, advertising, housewares, graphics and industrial design seem to be flourishing at fine art's expense. Both shows demonstrate how current visual practitioners play with, and are indebted to, art history. But the utilitarian designers have something over the artists-for-art's-sake, and that is utility itself.

Much has been made of the Whitney's inclusion, for the first time, of Internet art in its biennial. Including such art seems like a good idea until one enters the chosen sites. John F. Simon Jr.'s Web site, "Every Icon," for example, is a grid containing 32-by-32 black and white squares programmed to move around through every possible geometric configuration. According to the museum, "On an average home computer, it will take several hundred trillion years for the process to conclude, when every square is black." Watching it for five minutes feels like a trillion years. "Every Icon" might be a sly attack on abstraction's critics, pointing out that geometric compositions have endless prospects, but it doesn't come off sly -- only endless. By comparison, Kate Spade's crisp "Vertical Bucket Handbag" in the design show -- a cotton striped purse with multicolored, horizontal lines -- exudes a similar devotion to straight lines, but at least is handy enough to hold lipstick and gum.

"Design Culture Now" affords examples of how the ideas of artists can trickle down into everyday objects. Pablo Picasso's 1943 sculpture "Bull's Head," in which the animal's head is suggested by a bicycle seat and its horns are formed by bike handlebars, is given loving tribute in the "Picasso Internet Radio." Designed by Paul Pierce and Dennis Erber for Thomson Consumer Electronics, the radio is shaped like the Picasso bull, but its "horns" transmit sound like an old-time Victrola. It is a playful thing, a sculpture that is both tool and toy.

When the Whitney artists update the classics, on the other hand, it feels less like a playpen and more like an essay exam. Jasper Johns' famous flag paintings of the 1950s are given homage not once, but twice. Yukinori Yanagi has turned "Three Flags" into an ant farm. And Hans Haacke's infamous and ugly "Sanitation" installation incorporates a "Three Flags" variation hung between quotations from Rudy Giuliani, Jesse Helms, et al. written in Nazi script.

Having ants eat away at Old Glory, and hanging it next to piss-ant sentiments (like "Sanitation's" Pat Buchanan quote calling the First Amendment "the last refuge of the modern scoundrel"), are obviously tactics meant to reposition Johns' flags with regard to contemporary politics. But it seems to me Johns' flags are doing just fine accomplishing this on their own. Did anyone notice that Johns sold the Metropolitan Museum his 1955 "White Flag" at the end of 1998, during President Clinton's impeachment trial? It didn't take a great leap of the imagination to read into it an American flag bled dry of color while the Senate was bleeding its taxpayers in the name of the Constitution.

Who knows what appealed to the Whitney curatorial team about Vic Muniz's photo of Theodore Gericault's painting of "The Raft of the Medusa" rendered in Bosco chocolate sauce. It is smeared and it is brown. Perhaps the curators were temporarily nostalgic for grandeur, for a time when painting meant something, told stories, transformed acts of God into works of art. Once, describing Gericault's great shipwreck canvas, novelist Julian Barnes asked how catastrophe gets turned into art. He wrote, "We have to understand it, of course, this catastrophe; to understand it, we have to imagine it, so we need the imaginative arts. But we also need to justify it and forgive it, this catastrophe, however minimally. Why did it happen, this mad act of Nature, this crazed human moment? Well, at least it produced art. Perhaps, in the end, that's what catastrophe is for."

Those words were ringing in my head when I came across a series of objects that are the wittiest, the most beautiful and the most disturbing pieces in either show, because the 19th century did not corner the market on calamity. At the design triennial, the Boym Design Studio's little "Disaster Buildings" are as pretty as they are dark. Miniature monuments in nickel, they call to mind metal souvenir trinkets of the Eiffel Tower or Statue of Liberty. Constantin and Laurene Leon Boym's treasures, however, commemorate other, less romantic structures -- namely, the Unabomber's cabin, the Watergate complex, the World Trade Center and the reactors of Three Mile Island. Sites of terrorism, treason and disaster. And then there is the most disquieting structure of all, Oklahoma City's Murrah Building. It is cast after the bombing, the insides toppling in and gutted. Which is all the more gruesome considering that it is on sale in the museum gift shop. It is, after all, a paperweight, and undeniably heavy.

What would it be like to live with these things, holding down stacks of notepaper and mail? Would the bills seem less dire if held in place by the shack where Ted Kaczynski constructed his murderous letter bombs? Maybe. The "Disaster Buildings" are beautiful and questionable, accessible and mysterious, petty and tragic all at once. In other words, they're doing what art was always supposed to do, and if they keep one's in basket from blowing out the window, well, that would be no disaster.