Evil lurks in the hallowed halls of higher education; so does lousy dialogue. 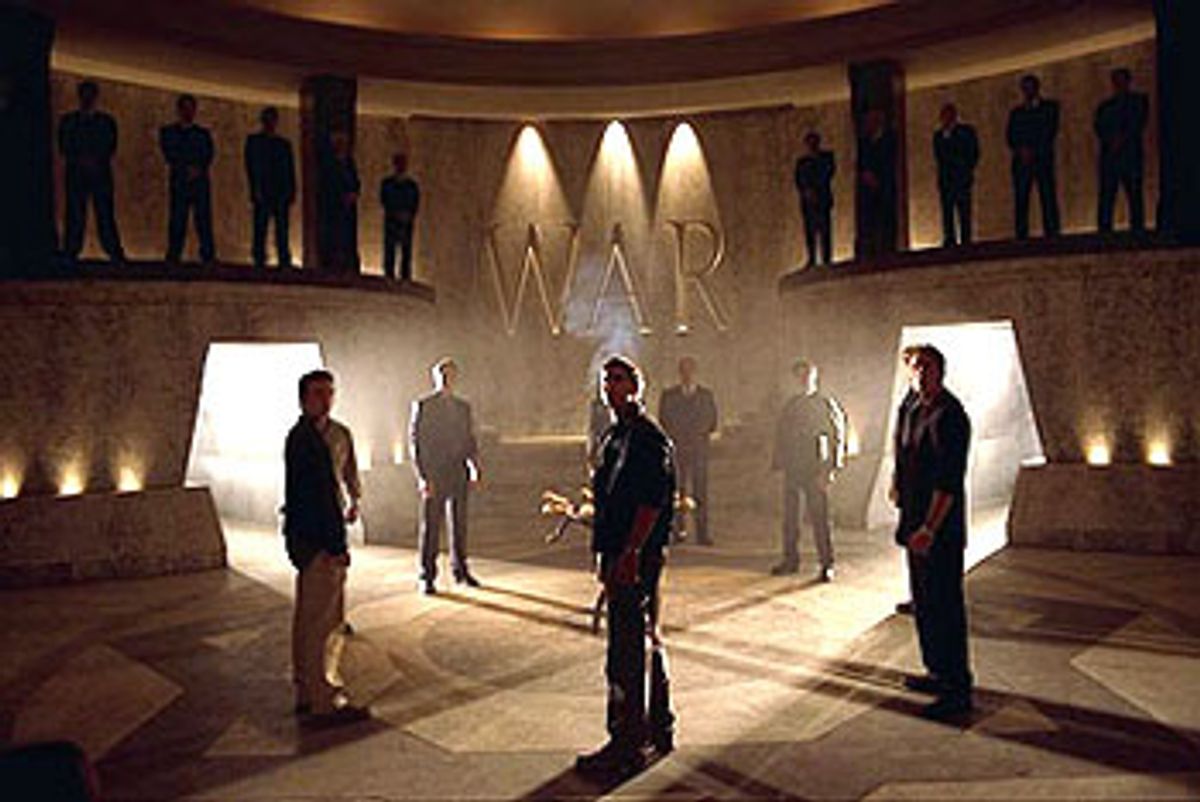 "The Skulls" is such a generic, automatic-pilot movie -- seemingly stitched together out of disconnected outtakes from the USA Network archives -- that seeing it doesn't help you understand it any better. In fact, I'm not quite sure I did see it. Can there really be a movie in which someone makes a cell-phone call from the bowels of a secret-society building that begins, "Dad! I just killed a guy in the Ritual Room!"?

Then again, "The Skulls" also features another character being dragged away in a straitjacket while howling, "I'm innocent! I'm innocent!" He ends up, of course, in a loony bin that looks like the House of the Seven Gables enclosed by barbed wire. At one point, the hero, Luke (Joshua Jackson), who has decided he must know the truth at all costs, is issued a dire warning: "You keep digging, Luke, and if you keep digging you're gonna dig your own grave." Honestly, though, my favorite line arrives when an allegedly artsy coed named Chloe (Leslie Bibb) has invented a computer program to shoot splotches of paint at the canvas, ` la Jackson Pollock. "Am I the artist or is the machine?" Chloe wonders aloud. "Maybe it's chaos in its purest form."

No, chaos in its purest form may be the incomprehensible plot of this unintentionally hilarious Ivy League thriller, filmed through a yellowy haze perhaps intended to convey the golden light of the groves of academe, although what it actually suggests is a terrible ragweed season in Connecticut. I suppose "The Skulls" is vaguely meant to cash in on popular curiosity about George W. Bush (if there is any) and his purported connection to the secret Skull and Bones society at Yale. Surely it's also meant as a vehicle for Jackson, a star of TV's "Dawson's Creek," who in fact bears a slight resemblance to the young Dubyah. But if this attractive young man wants a vehicle, he should head out to Auto Row and buy himself a Lexus. This one's a pile of crap that won't start.

In the hands of someone with a real appreciation for sleaze and an appetite for the barely submerged eroticism of this world of Gothic architecture and secret brotherhoods -- like Gus Van Sant or Paul Verhoeven -- "The Skulls" might have yielded a delicious haute-bourgeois fantasy. But director Rob Cohen (whose unimpressive risumi of films includes "Daylight" and "Dragonheart") seems to have little idea of what he wants; the movie is chaste when it should be randy, boring when it should be mysterious and rambling when it should be tightly plotted. You get the feeling that John Pogue's script was written on the fly, as a series of tenuously linked "dramatic" episodes. At the climax, Luke announces that the way to break the Skulls' malevolent power is to enter their sanctuary alone and challenge a rival member to a duel. But no one in the movie, including Luke, can offer a coherent theory about how that's supposed to work.

If Jackson comes off poorly in this starring role, he gets plenty of help from Pogue, whose screenplay sets up Luke as an opportunistic shit-heel all too eager to bail on his real friends the moment the Skulls come calling. A star rower on the crew team that has brought Yale (clearly the setting, although it's never named) three straight Ivy championships, Luke is recruited by the |ber-double-secret Skulls even though he's a townie with a juvenile delinquent background. He's heard that the Skulls will pay your way through law school and that's good enough for him, despite the warnings of his black friend Will (Hill Harper): "All I know is if it's secret and it's elite, it can't be good."

Willowy Chloe, the object of Luke's unfulfilled crush, is similarly opposed. Chloe is supposed to be a prep-school girl turned rebel, although the only tangible evidence of this is that she hangs out with Luke and Will in some sort of knockoff "Jules and Jim" sexual-frustration arrangement. Once initiated into the Skulls, in a supremely boring ceremony conducted in a torchlit underground chamber straight out of dozens of martial-arts video games, Luke is paired with his new "soulmate." This is Caleb (Paul Walker), a privileged pretty boy whose dad (Craig T. Nelson) is both the Skulls' grand pooh-bah and a federal judge angling for a spot on the Supreme Court. Walker, whose previous credits include "She's All That" and "Varsity Blues," has the right male-model looks and dissolute mannerisms for the role, but his thick Valley Boy accent is distracting even to a California boy like me. "Please don't give them a reason" comes out something like "Pleezdoangimmareezn." You feel like Walker's method acting is focused on not saying "dude" after every sentence.

There are about five minutes in the middle of "The Skulls" when the fancy dinners, T-Bird convertibles, long-legged chicks and mysterious $10,000 deposits the Skulls can provide are made to seem alluring. Then Will's attempt to investigate the secrets of the Skulls for the school paper goes awry, leading assuredly into the standard coverup-and-chase plot from numerous military- or corporate-intrigue movies. Think "The Devil's Advocate" minus Al Pacino frothing at the mouth, or "The General's Daughter" minus John Travolta and all those shots of a naked, spread-eagled woman. Eventually, when the plot goes completely adrift, Cohen and Pogue seem to throw up their hands in despair, surrendering to one of those pseudo-profound thriller endings announcing that All Is Not What It Seems, and indeed that Life Itself Is an Illusion.

Several decent actors are dragged down in the undertow here: Harper has better credentials ("In Too Deep," "Beloved," "He Got Game") than any of the leads, but can do nothing with the do-gooder role of Will. Moonlighting from his excellent work on ABC's "The Practice," Steve Harris never seems comfortable with an ill-defined role as a possibly corrupt cop. Only the veteran Nelson, with his enormous forehead and his repertoire of sinister slow burns, seems to appreciate that no amount of hamming is too much in a movie like this. For his skillful efforts to redeem these lost two hours of my life, I will always be grateful.