Estranged on a train

My beautiful French compartment-mate promised she'd slink over to my bunk. 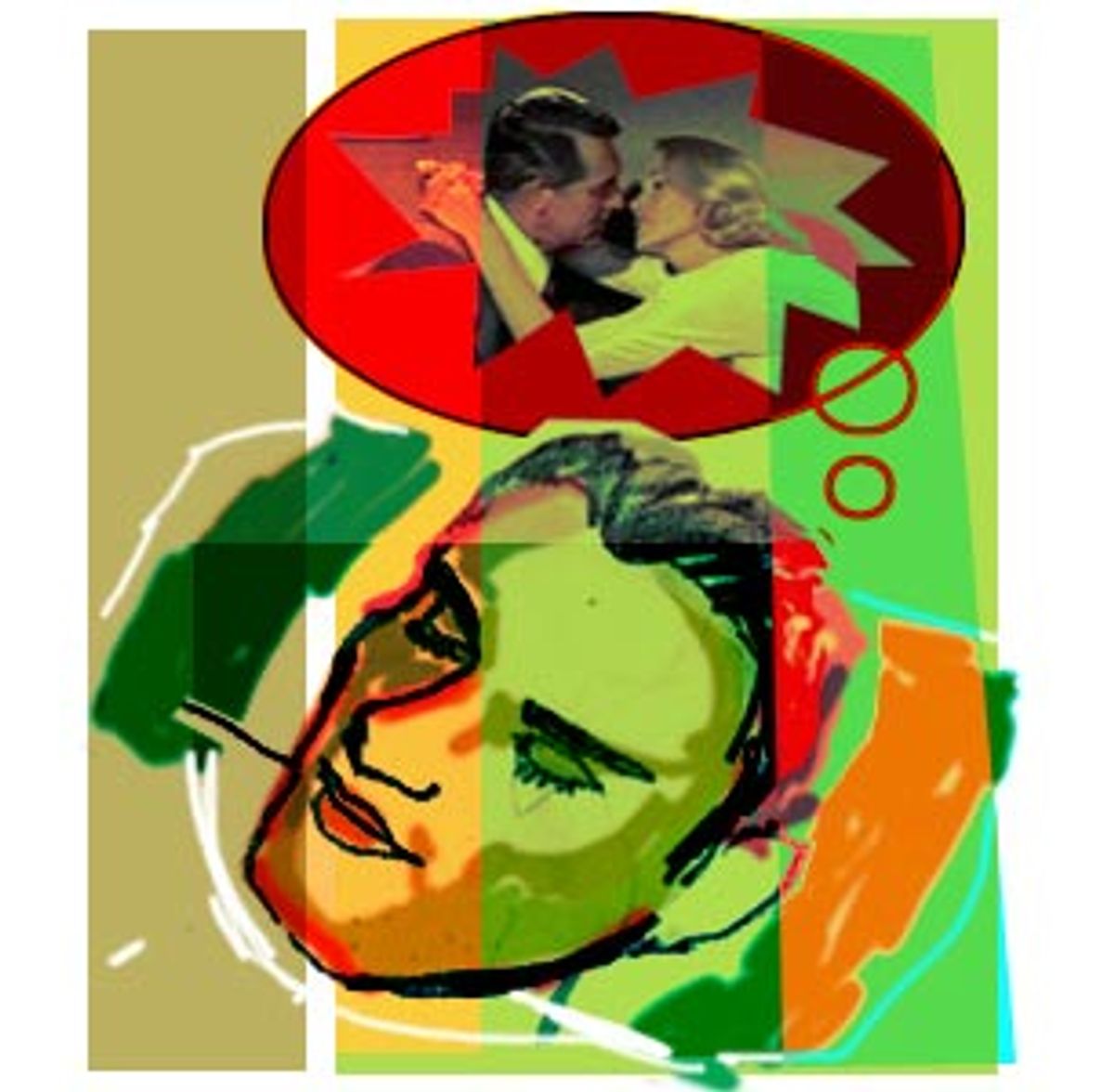 Since I was 13, when I first saw Cary Grant and Eva Marie Saint in "North by Northwest," I'd fantasized about having an affair aboard a train. So when, 10 years later, traveling on my own in France, I found myself alone in the sleeping car on the night train from Toulouse to Paris with a beautiful, sophisticated Parisian woman (Michelle: ash-blond hair, green eyes, no makeup), I was beside myself with anticipation. When the conductor came by to check our tickets and told her she was in the wrong wagon, my heart fell. However, the conductor went on to say, she might as well stay where she was, since we two had practically the entire train to ourselves.

"But what about the signs?" asked Michelle, referring to the little white cards marked "reserve" posted beside every couchette.

The conductor smiled and shrugged as though to say, "With SNCF (Systhme Nationale de Chemin de Fers Français), anything is possible." So went the publicity slogan of the French National Railway System. In any event, Michelle and I were left alone.

We spoke. About books mostly, and Henry Miller in particular, since he turned out to be Michelle's favorite American author, "Sexus," being her favorite of his books. A good sign, I thought. She asked me, "Qu'est-ce que tu aimes?" meaning "What do you like?" I could have told her many things, such as how I liked leaning against an open train window at night with Europe whizzing by and the wind whipping my hair and an attractive woman who likes Henry Miller by my side. Instead I said, "I like Nelson Algren," referring to the man who wrote "The Man with the Golden Arm." Being French, she knew right away who Nelson Algren was, since the French tend to know more about our writers than we do, and because Algren, here as well as there, is best known for his affair with Simone de Beauvoir. But Michelle had actually read Algren -- both "Golden Arm" and "Walk on the Wild Side." I'd struck gold -- French gold in an empty sleeping car at night!

Since sleep on trains or boats or planes never comes easily for me, I had my trusty Valium supply on hand: Four tiny canary-yellow pills in a prescription vial in my pocket. But now I had second -- and third, and even fourth -- thoughts about taking any. Alone in the dark sleeping car, the French countryside rolling by under a veil of stars, our forearm hairs commingled as we stood side by side with the humid night air blowing past our faces. I thought of the last scene in "North by Northwest," where Cary Grant hoists Eva Marie Saint up into his "couchette" and the train plunges into a dark tunnel ...

We spoke in hushed voices for several hours, sharing my bottle of water, Michelle having forgotten hers at the station. And she wasn't tired; I got the feeling she could talk all night. If only she'd come right out and proposition me, pull me into her couchette with her. She was Parisian, she was sophisticated. Eva Marie Saint would have done no less. Besides, I was too hopelessly shy to make a move. Finally I said I was going to my couchette, that I'd be lying down there but that I wasn't really tired and, if she wanted to, if she felt like it, she could take the couchette next to mine and we could continue our conversation.

Michelle gave me a look. The look was half-sly, half-annoyed.

"Oui." She gave a toss of her limp bangs, then refocused her gaze back out the window, into darkness.

"You're not afraid to sleep in the same compartment with me, are you?" I asked.

She smiled. "No," she said. "I'm not afraid. I've slept with many strange men in many trains before." The ambiguity was, I felt certain, intentional. "But I'm not tired. I'll be here for a while."

"Draguer" is an interesting French verb. It means literally to drag up or to dredge, what a minesweeper does. In this context, however, it meant "pick me up," as in seduce, though by the sound of the word you'd think something like rape was implied.

She smiled, seeing right through me. "Yes, I'll join you. In a while. I promise." She gave me another smile, this one positively complicitous. "Bonne nuit."

"A bientôt," I corrected and limped into my compartment.

The compartment held six beds -- bunks, really, with leather pads and blankets and a mysterious piece of thin white linen, open at one end and sealed like a tube at the other, with a long sleeve or tongue about a foot wide extending from the slit-like opening.

At first I thought it was some sort of disposable night robe, in which case it would have to have been the night robe of someone with no arms and one leg, and that leg without a foot. In fact this was my bed sheet -- a cross between a sleeping bag and a combination top-and-bottom fitted sheet, except that it didn't seem to fit either the bed or me. Having spent the greater part of 15 minutes trying to manipulate the thing into some useful configuration, I discovered two things: One, that I'd left the air-conditioning on, so the compartment was now freezing and two, that my blanket was somewhere down there on the floor. Undoing all my manipulations I climbed down from the bunk, returned with blanket in hand and started the process all over again, only to find this time around that I'd left the light on, and that the switch was over my head on the other side of the compartment.

This pattern repeated itself with minor variations two or three times more, until I was literally hopping crazed in my one-legged white potato sack of an SNCF ("With SNCF anything is possible") bed sheet, sweating from my efforts in spite of the air-conditioning, which somehow froze my sweat without keeping me cool.

At last I heaved away the blue SNCF blanket and lay there, in my undershorts, staring at the bottom of the bunk overhead, wondering: Where was Michelle? Was she coming or wasn't she? Should I take my Valium, or shouldn't I? She had said she was coming, and she seemed so straightforward and ... sincere! Was it conceivable that, on a French night train with no one else aboard other than me and this beautiful French woman, whose favorite book was "Sexus" and who'd read Nelson Algren and who had casually agreed to sleep with (or at least in the same compartment as) me -- was it possible, was it indeed probable, that she wasn't coming? That she had, in fact, stood me up? With SNCF anything is possible. And so, having once again climbed down from my meticulously orchestrated bunk, and climbed into my wrinkled clothes, and patted down my matted curls, and double-checked my zipper, and rubbed the sleep from my face, I slid open the compartment door, and poked my head out into the windy aisle and ... and ...

Michelle wasn't there. She had gone to sleep, in her own, empty compartment next to mine. We'd been strangers on a train, and now -- before we'd even gotten to "know" each other a little -- we were estranged strangers. Eva Marie Saint she wasn't; Cary Grant I wasn't.

It was 3 in the morning. I still hadn't taken my Valium. To complicate matters Michelle had absconded with my water bottle, meaning I'd have to dry-swallow the pills, which I did. Two of them. The second pill lodged in my throat, adding its bitter taste to that of unrequited sleeping-compartment lust.

Meanwhile oxen in teams pulled a medieval cart along an ancient thoroughfare, past columns (Doric, Ionic, Corinthian) falling and splitting as henna-haired women in scant dress and chained by the ankles popped dates and other delicacies into my mouth. Though it fell and I was its slave, the Holy Roman Empire was mine at last. Sleep is good; sleep is kind: Next to gravity one of the most useful things on the planet. Bless you, dear sweet Prince Valium, my lord, my liege ...

Then the compartment door opened.

Michelle. She'd come after all!

With SNCF, it is said, anything is possible.

But not on 20 milligrams of Valium.

Peter Selgin's work has appeared in New Yorker, The Wall Street Journal and Time-Out New York. His short fiction has been nominated for Pushcart Prizes.