"Jacobson's Organ and the Remarkable Nature of Smell" by Lyall Watson

How we smell, why we smell and (best of all) what we smell: A guide to the most provocative, sensual and misunderstood of the senses. 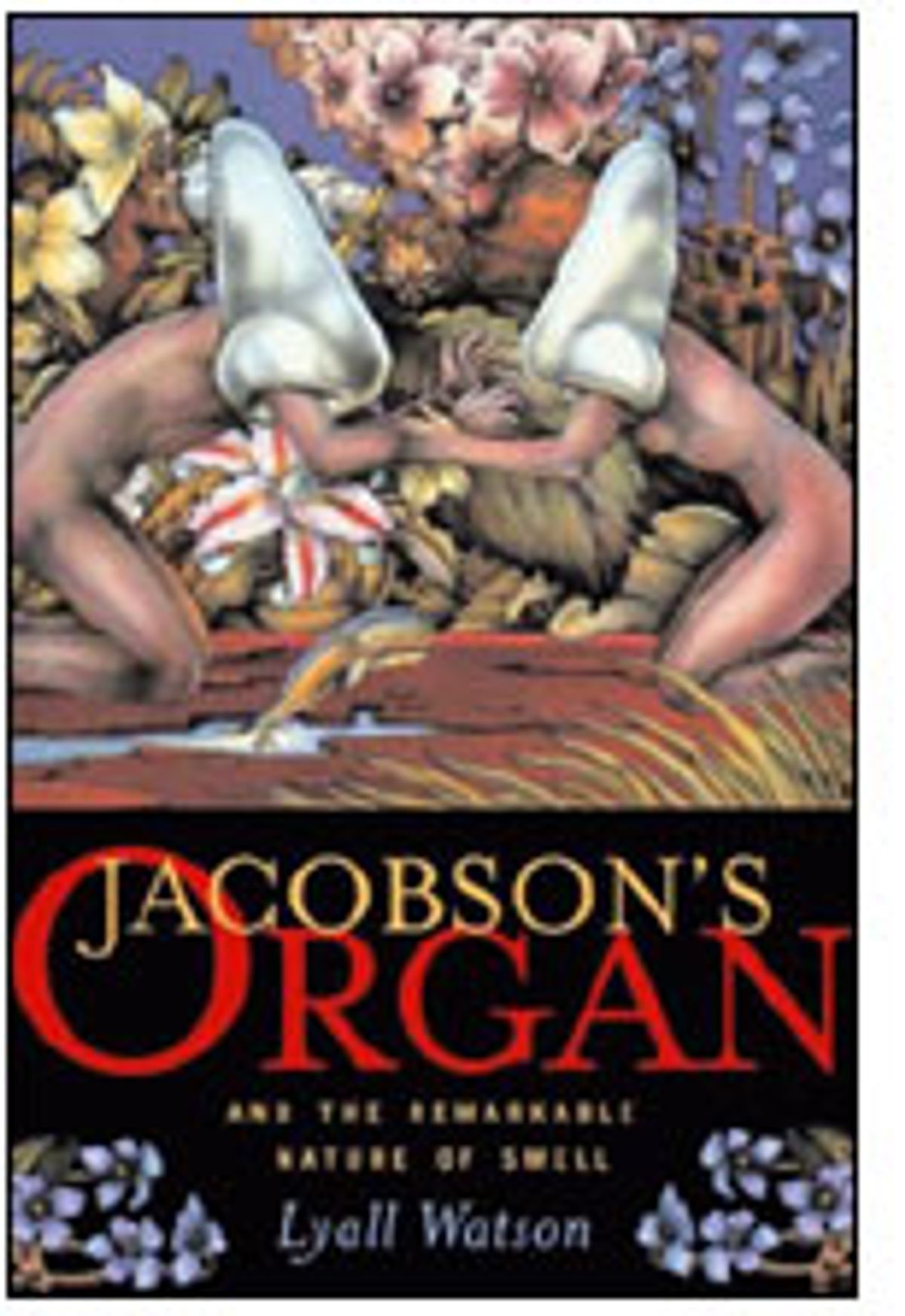 Napoleon wasn't the only connoisseur of a strong sniff. In France, armpits were once known as "spice boxes." A Victorian courtesan made a fortune by selling handkerchiefs kept between her bed sheets. And some Austrian girls still wear slices of apples under their arms to create fragrant gifts for their suitors.

Lyall Watson's new book, "Jacobson's Organ and the Remarkable Nature of Smell," is a witty journey into the mysterious land of scent. Whether we prefer the aroma of the unwashed or of the spray bottle, Watson argues, smell is the most provocative, sensual and misunderstood of the senses.

Smell allows us to distinguish strangers from loved ones, good food from rotten, disease from health. With a finely tuned nose, a man may be able to pinpoint when a woman is fertile. And enemies at war are able to sniff one another from a distance.

Scientists, Watson tells us, haven't completely figured out how smell works. But he does an admirable job of pointing out why the sense is so important. He maps its link to evolution and to self-protection. When mule deer suspect a stranger among the herd, they obsessively sniff each other's knees until the intruder is detected and ousted; then each deer urinates down its hocks, bathing itself in a familiar odor and creating a group bond. Smell is equally important in mating. Deprive the pig of his olfactory bulb and he's clueless about sex: He can't tell a boar from a sow.

If Watson had kept his book to an exploration of the role of smell in social information, survival and emotions, it would be a compact, tantalizing olfactory travelogue. Unfortunately, his theories are sometimes grander than his research, particularly on the title subject: Jacobson's organ. Discovered by the 19th century surgeon Ludwig Levin Jacobson, the organ is a secondary smell system in bats, snakes and many mammals.

In garter snakes, for instance, the organ -- a pair of tiny pits in the roof of the mouth -- detects mates and prey. Scientists have also identified the pits near the nasal septum in humans. But there's little consensus on how the organ functions. For years, doctors and scientists believed it was vestigial. But some recent studies on humans suggest that it detects chemical signals affecting emotions and sex.

With this sketchy evidence in hand, Watson plunges into fanciful prose that reads more like hype than like science. Jacobson's organ, he says, could become our sixth sense and "the most important key to unraveling the mysteries of our minds since the discovery of the unconscious." We'd be able to sniff "a snake under the porch," "when the figs are ripe," "who is coming through the orchard" and "when the girl next door ovulates." How would we train our nose to sniff out these things? And why would we want to track our adolescent neighbor's ovulation cycle? (To keep the boys away?) Watson doesn't tell us.

But in his valentine to smell, he does convince us that loss of smell, or anosmia, is a dreadful fate. For one thing, it's dangerous: Without smell we couldn't detect a gas leak or sniff out stale or poisonous food. But worse, as Napoleon understood, life without pungent sniffs would be very bland indeed.