What the strange, cutesy world of book kitsch says about our reading lives. 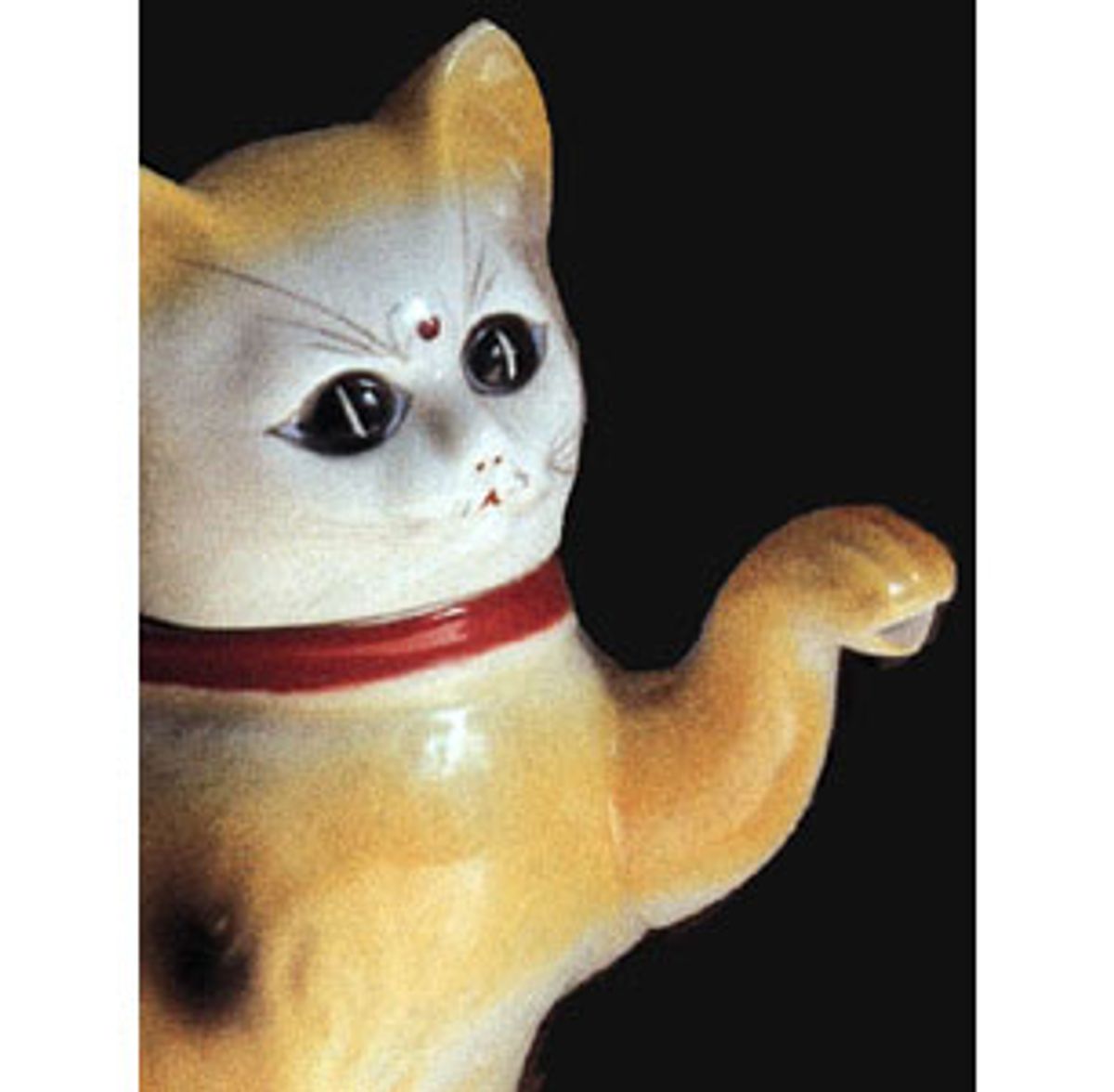 Possibly because I make purchases at online bookstores, or because I am on mailing lists for countless publishers' catalogs, or more likely because nearly everyone fits the definition as they see it, the proprietors of the 12-year-old Levenger catalog have identified me as a "serious reader." That's what they do -- sell "tools for serious readers" -- and I can buy into this notion of myself by purchasing a leather case for my Palm Pilot, "the pen of the year," a portable chess set, a coin purse, an Old-Time Paddle Ball game or a calendar of photographs of 20th century globes.

"Our customers love learning -- and the written word," say founders Steve and Lori Leveen in their introduction to the holiday catalog. That congratulatory message (on the order of "you are a reader, you special smart person, you") explains a kind of tchotchke that has existed for years and currently makes its home in the Levenger catalog and in bookstore gift departments. In an age when our media is constantly saturated with dire reports on how the average American watches four hours of television daily or on how pornographers might show your children dirty pictures on the Internet, the market for paraphernalia that identify their owner as literate and interested in books appears to be slowly and steadily expanding.

Items like Levenger's paddle-ball game and coin purse cater to nostalgia for the days when pleasures were simple and products were made with care. Since buying them wouldn't identify me as a "serious reader" to anyone but myself, presumably I purchase this kind of thing from Levenger rather than from Restoration Hardware or the Sundance catalog because I like the idea of myself as Reader more than the idea of myself as Ms. Fix-it or New Age Woman Sensitive to Native American Culture. Items like the chess set or the calendar of globes, however, offer the purchaser an opportunity to publicly demonstrate interest in the enjoyments of the intelligentsia. There are lots of these available from Levenger: wordsmith games, cases for special pens, collectible editions of books by Charles Dickens or Lewis Carroll.

More practical products make up maybe 20 percent of the catalog. The "serious desk for the bed" and the pillow "designed for reading, not sleeping" appeal to someone who not only reads "seriously" but thinks of himself as doing so. In a similar vein, there are several boxes that organize multiple colors of Post-it notes, CDs of classical and instrumental music "for the reader" and a lamp that allows the owner to read in bed without disturbing her spouse.

Perhaps the growth of chain bookstores as public spaces has gotten people interested in the idea of being a reader -- at least, a reader as imagined and promoted by the corporate wizards of places like Barnes & Noble. At my local B&N, the reading tchotchke shelves have an entire area unto themselves. As reading becomes linked to a particular kind of social activity (browsing, flirting, coffee drinking), and places to do it can be found in any local mall, "a reader" is becoming something that it wasn't before: a person affiliated with the products of a large commercial enterprise. That person needs to be encouraged to become a regular customer, and one way to do that is to provide him with self-congratulatory items like bookmarks, special pillows and itty-bitty bookmarks that celebrate his identification with the company's merchandise.

Like the products in the Levenger catalog, most of the things for sale at B&N give their owners a self-image as a reader that is apparently inadequately supported by ownership of actual books. The big-ticket items are bookends, ranging in price from $29.95 to $69.95, and they are displayed holding up the sort of tomes that almost no one but a graduate student owns for any purpose but a middlebrow display of cultivation: Everyman library editions of Anton Chekhov, Thomas Hardy, Wilkie Collins, Daniel Defoe. They have been relieved of their shiny white jackets so the volumes look older, more official.

The bookends themselves feature a pint-size bust of Shakespeare or a "studious gargoyle." "This inquisitive medieval gargoyle is catching up on his reading as he protects your library from demons, bjtes noires, etc.," says the promotional copy. The "literary cat" has miniature bookshelves topped by a curious feline and the "world scholar" ends feature a ceramic stack of "well-read" books and a sepia-colored globe: "We consider this a perfect gift for the worldly reader."

Clearly, the consumer targeted by these reading tchotchkes is not actually a world scholar. It's safe to say that members of the intelligentsia will by and large turn up their noses at minibusts of Shakespeare. The tchotchke makers seem to be selling a fantasy of readerliness to people who either strive for the cachet of intellectualism or feel nostalgic for the good old days of the 19th century, when country houses had libraries and novels came in three volumes.

The shelf called "Unique Gifts for the Reader" in B&N is mostly stocked with items that are impractical or have nothing to do with reading: a snow globe with Santa inside, photo albums, rubber stamps, glorified blank books ("Millennium Notebook"), kitty-cat photos you can display on your computer, a Shakespeare paperweight in a package that explains, for those serious readers who may not know, who Shakespeare was. An author friend of mine was recently given a rubber stamp reading, "Outside of a dog, a book is a woman's best friend. Inside of a dog, it's too dark to read." Other gifts are ostentatiously useful for some all-but-unnecessary purpose: Book Gear USA makes an eyeglass case that straps to your book and a protective cover so you can "take your reading with you" -- as if such a thing would be impossible without this special product. The covers also provide "reading privacy," which of course you need only if you're reading something of which you are ashamed. There are jumbo-size Book Gear covers for the Bible.

A display case labeled "Gifts for Readers Collection" includes bookmarks of all kinds, many of them storybook or television tie-ins. Wishbone the television dog has a bookmark on which he poses atop a stack of classics: He has chosen "Oliver Twist," "Don Quixote," "The Prince and the Pauper," "The Odyssey" and "Joan of Arc" -- all tales of adventure, with the odd exception of "Silas Marner," a book that has doubtless made generations of children hate George Eliot. "Wishbone wants you to know that dogs and books are everyone's best friends," says the back.

These bookmarks are clearly intended for children, and it's natural to want to buy readerly paraphernalia as a way of encouraging children to read -- they're rewards for and enticements to reading for people who are just learning to do it. If Bugs Bunny enjoys it, it's probably pretty cool, and a neato Wishbone bookmark can't be used unless you've got a book to mark your place in.

But what, then, are we to make of the bookmarks featuring Anne Geddes' famous baby photographs, sunset seascapes or sexy pictures of Elvis Presley? They have neither the nostalgic intellectual cachet of the inquisitive gargoyle bookends nor the childish appeal of Bugs. And in the age of paperbacks, now that people own books more than borrow them from libraries and are free to dog-ear the pages, the bookmark has hardly any purpose. Plus, a Post-it note works better anyway, because it doesn't fall out. Why do people buy bookmarks? It must be for their symbolic representation of readerliness, construed in this case not as "worldly" and "serious" but as cute (Geddes), romantic (sunset) or hip (Elvis). The bookmark suggests not only a desire to identify as a reader but also a reverence for books, a respect for their totemic power. Odd as it may be to convey that reverence by means of a photo of a baby dressed as a giant cabbage, people are doing it.

But even though readerly reverence can explain most of the kitsch I've come across, there's still a problem here: Many of the products seem to be about pretending you read a kind of book that you very likely do not (Shakespeare, Chekhov) instead of relishing whatever genuinely thrills you. Celebrating reading is good. Taking pride in doing something you love is good, whether it's through a cabbage-baby bookmark or the Oxford English Dictionary. But if you read Piers Anthony or Georgette Heyer, and you're buying Shakespeare busts, old-globe calendars and Lewis Carroll collectibles as a way of showing your pride in reading, then there's a lot of shame mixed in with that pride. There's an idea that reading Chekhov shows you are serious and worldly and that that's more valid than being romantic, or fantastical, or quick to laugh -- that only one kind of academy-sanctioned taste is worth celebrating.

Books are usually perceived as benevolent and harmless compared with the terrors of gangsta rap lyrics, Internet bomb recipes and television sitcoms, so the "serious reader" conceives herself as rejecting the media blitz in favor of old-fashioned aesthetics, if not values. But books, too, can provide vapid entertainment, corrupt young minds and perpetuate short attention spans and stereotypes. In short, although nostalgic reading paraphernalia paint books as the last gasp of a pre-media-saturated world, books have always been the media, and they always will be.

Reading kitsch is very often useless. It can perpetuate shame in its idealization of "worldly" and canonical taste, and it belies the book industry's complicity in our media glut. Nonetheless, as I was working on this essay my mother bought me little copper-colored "page points" from Levenger (to mark my place in things I read), and I was forced to admit that I like them. They are pleasing, and they allow me to demonstrate care for books I might ordinarily underline or dog-ear. And they go nicely with my old-fashioned letter box, which has special drawers for envelopes and stamps and makes me feel nostalgic for the good old days of letter writing. I admit, I have a framed poster advertising a rare edition of "Frankenstein" on my study wall, and a picture by noted illustrator Arthur Rackham -- both "collectibles," and symbols of my reading tastes. But I also have a page from a "Catwoman" comic, a business card ostensibly signed by Sherlock Holmes, a magazine photo of a porcupine fish and another of Deborah Harry.

I've kitsched up my office not only with symbols of my academy-sanctioned interest in 19th century novelists and early 20th century illustrators, but also with emblems of the other things I read: detective stories, comics, magazines about beautiful women and wildlife. My monthly copy of Vogue gets read long before Lingua Franca, and I am not ashamed. I am a Conan Doyle fan, hear me roar. And Cynthia Heimel has made me giggle since I was 16 years old -- where is my Heimel paperweight?

When they make tchotchkes for her -- not just for Chekhov and Shakespeare, but kitsch for readers of Heimel, Heyer, Anthony and Doyle -- then maybe we'll truly be celebrating reading, rather than some exalted idea of a virtuous, scholarly hobby. A reading life deserves representation in all its complexity -- its commercialism as well as its intellectualism, its shallowness as well as its depth, its entertainment value as well as its profundity.