So Microsoft broke the law. But while the judges argue among themselves, the company remains free to stalk new markets. 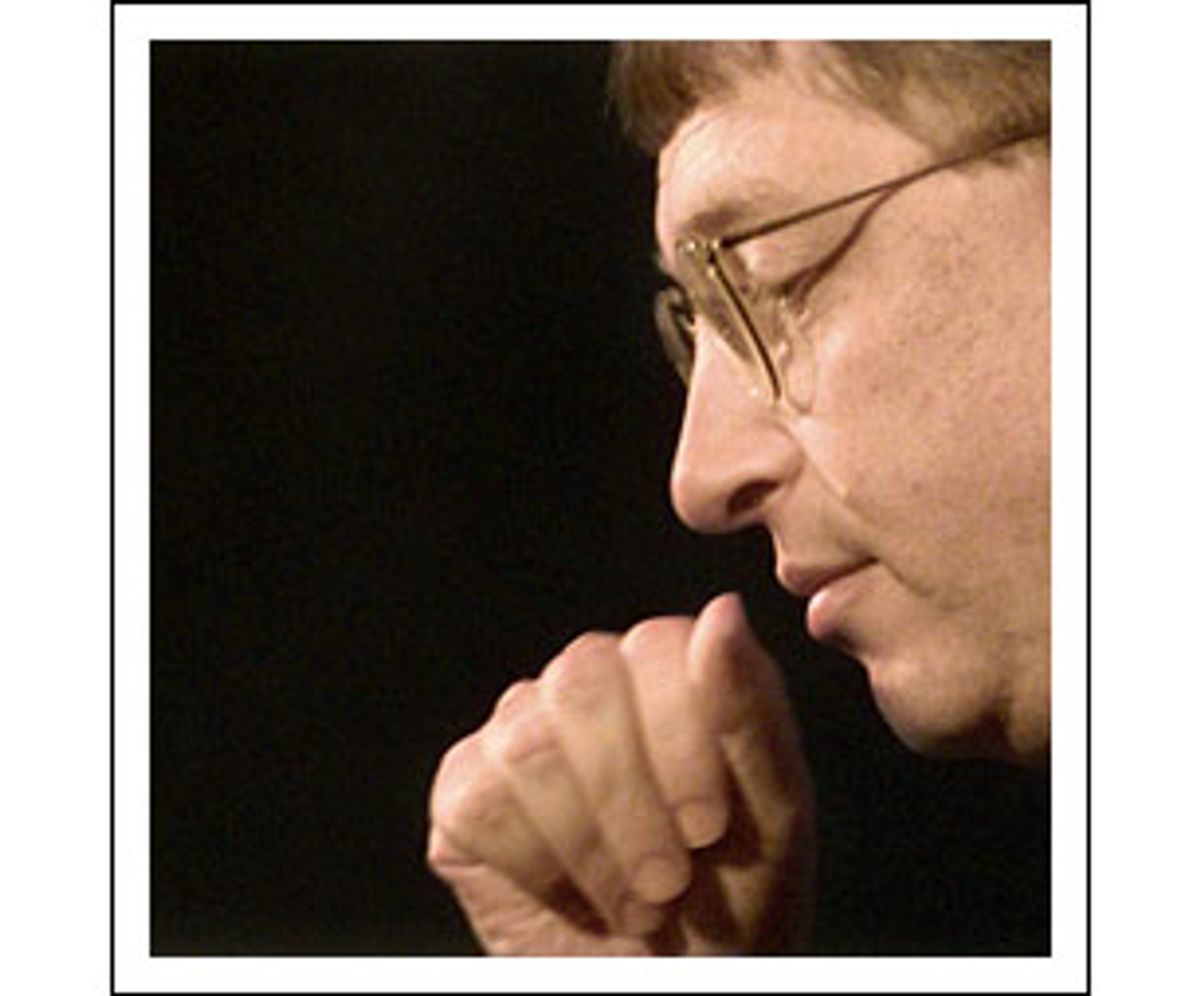 Or at least it has broken the law --
doing "violence" to the competitive
process -- according to the U.S.
District Court where its antitrust case
has been heard over the past year and a
half. That judgment will stand
while the court decides what should be
done with, or to, Microsoft -- and
while Microsoft inevitably takes its
case up the judicial ladder, in hopes
of reversing the ruling.

Those are the two directions this battle
will take now that settlement
talks have failed (and, gee, who was
really surprised at that?) and
judgment has been entered. On one hand,
the plaintiffs in the trial
will, along with Microsoft's enemies,
try to agree on a set of "remedies"
that might or might not include breaking
Microsoft up into little pieces.
On the other hand, Microsoft's legal
army will abandon its field of shame
in Judge Thomas Penfield Jackson's
courtroom for what it fervently hopes --
and has good reason
to believe -- will be more hospitable
terrain in the U.S. Court of Appeals.

Unlike the judge's "findings of fact"
released last November, which painted
a gripping narrative of Microsoft's
predatory behavior in the browser wars,
the "findings of law" released today is
a relatively dry affair. The document details
the specific legal grounds under which
Microsoft has violated the Sherman
Antitrust Act. Jackson concludes that
"Microsoft maintained its monopoly
power by anti-competitive means and
attempted to monopolize the Web browser
market, both in violation of Section 2
[of the Sherman Act]. Microsoft also
violated Section 1 of the Sherman Act by
unlawfully tying its Web browser
to its operating system." The judge
rejected another claim that
Microsoft's contracts with other
companies constituted "unlawful
exclusive
dealing" under the antitrust act's
Section 1.

Overall, he found that Microsoft --
rather than "innovating," as it has
steadfastly maintained -- actively
worked to reduce the choices available
to consumers: "Microsoft's
anti-competitive actions trammeled the
competitive process through which the
computer software industry generally
stimulates innovation and conduces to
the optimum benefit of consumers."

None of this comes as any surprise; it
was plain that Jackson would come
down on Microsoft from the tenor of his
"findings of fact." But one part
of the new ruling does provide some
dramatic sparks.

If you remember, before Jackson began
presiding over this trial he also
ruled on a narrower case, one that had
charged Microsoft with violating the
terms of a 1995 consent decree. That
agreement had averted a major
antitrust case in its time. But in 1997
the Department of Justice argued
that Microsoft's behavior in the browser
market violated its terms. Jackson
agreed -- but his colleagues on the U.S.
Court of Appeals did not, and
overturned his ruling in 1998.

That preliminary appellate decision has
hung forebodingly over every step
of the subsequent full-bore antitrust
trial. Now, in today's findings,
Jackson fires a preemptive round at his
appellate colleagues, citing a
couple of Supreme Court decisions
as precedents for his decision on
the "tying" issue -- thereby, as it
were, attempting to trump the appellate
court by going over its head.

This gets a little complicated -- well,
of course! -- but basically, the
appeals court had granted software
companies like Microsoft immense
latitude in product design and set very
high barriers to antitrust
complaints based on the integration of
products ("tying"). Jackson fires
back: "The majority opinion in
Microsoft II [the appeal in the consent
decree case] evinces both an
extraordinary degree of respect for
changes
(including 'integration') instigated by
designers of technological
products, such as software, in the name
of product 'improvement,' and a
corresponding lack of confidence in the
ability of the courts to
distinguish between improvements in fact
and improvements in name only,
made for anti-competitive purposes. Read
literally, the D.C. Circuit's
opinion appears to immunize any product
design (or, at least, software
product design) from antitrust scrutiny,
irrespective of its effect upon
competition, if the software developer
can postulate any 'plausible claim'
of advantage to its arrangement of
code."

Citing two Supreme Court rulings,
Jackson maintains that the boundaries of
specific software markets -- like
browsers and operating systems -- should
be defined not by what the
software-maker defendant says, but by
how the
software-buying public acts and thinks.
While Jackson nods in the direction
of the appellate decision's "admonition"
regarding "the perils associated
with a rigid application of the
traditional 'separate products' test to
computer software design," he concludes
with his own appeal to the highest
court in the land: "To the extent that
the Supreme Court has spoken
authoritatively on these issues,
however, this Court is bound to follow
its
guidance and is not at liberty to
extrapolate a new rule governing the
tying of software products.
Nevertheless, the Court is confident
that its
conclusion, limited by the unique
circumstances of this case, is
consistent
with the Supreme Court's teaching to
date."

In other words, Jackson to appellate
judges: My precedents are stronger
than yours!

This legal conversation is critical
because, ultimately, the remedies
Jackson's court proposes are meaningless
until and unless his judgments are
upheld in higher courts. But legal
conversations take time. Even on the
fast (for antitrust cases) track that
this case has taken, it's likely to
be two more years before we know the
outcome.

In the previous two years, of course, Microsoft's Internet Explorer browser
took the lead from Netscape's Navigator/Communicator and Netscape was sold
to America Online. The browser war was widely declared over and won. So the
big question hanging over the continuing antitrust case is, what further
markets will Microsoft move into while the law grinds away?

Jackson's ruling makes explicit something astute observers have long
understood: That Microsoft's victory in the browser war was a negative
achievement -- it prematurely shut down certain avenues of computing's
evolution before they had a chance to emerge. Microsoft wanted to make sure
that the Web browser did not become a useful applications platform that
might challenge aspects of its operating system monopoly.

Maybe the Web browser, for a variety of technical reasons, wouldn't have
proven a very good platform anyway; but Microsoft made sure we wouldn't
have the chance to see for ourselves. By weaving the browser into its own
operating system, it wasn't "innovating," but rather choking off the
potential innovations of others.

All that said, anyone trying to view the Microsoft trial with some kind of
balance must remain torn between two valid perspectives: On the one hand,
Microsoft has behaved like a predatory monopolist and probably
deserves to have the full weight of antitrust law land with a kick on its
arrogant posterior. On the other hand, the technology market does
move so fast that every couple of years there is, as Bill Gates is
constantly reminding us and his own troops, a new challenge to Microsoft's
dominance. Yesterday, Netscape; tomorrow, Linux?

Some commentators have placed great weight on the possibility that
Microsoft, in the wake of the "findings of law" ruling, may now find itself
dealing with a vast number of distracting private lawsuits based on its
new, confirmed legal status as monopolist. But the ultimate significance of
this week's failed settlement talks and harsh judicial ruling may well lie
in Microsoft's ability to fight more rounds of its market-dominance game
before its legal rope runs out.

In the past, the company has trounced its opponents, one after another --
from the pre-DOS operating system CP/M to IBM and Apple to its competitors
in the office suite market to Netscape. With each victory, Microsoft has,
to adopt its own favored verbs, "embraced" new markets and "extended" its
sway -- from command-line operating systems to graphical operating systems
to office productivity software to Web browsers, its hegemony keeps
widening. Now the next wave of competitors looms: Handheld devices are a
platform Microsoft does not yet control; the server marketplace is hotly
contested; electronic commerce remains a wide-open field.

As long as the antitrust case is wending its way through the courts, and
whatever happens at the end of that road -- whether the appeals judges
exonerate the company or the government succeeds in busting it up --
Microsoft will have years more to fight these battles.

How many more markets will be "embraced and extended" into Microsoft
fiefdoms by the time the courts have finished their work? And how can any
ultimate remedy -- even a breakup of Microsoft -- make up for the
innovations lost and the choices foreclosed?