Did Lester Bangs die in vain?

Jim DeRogatis' solid new biography argues that "America's greatest rock critic" spawned a generation of self-absorbed hacks -- and a neutered music press that wouldn't have a place for him anymore. 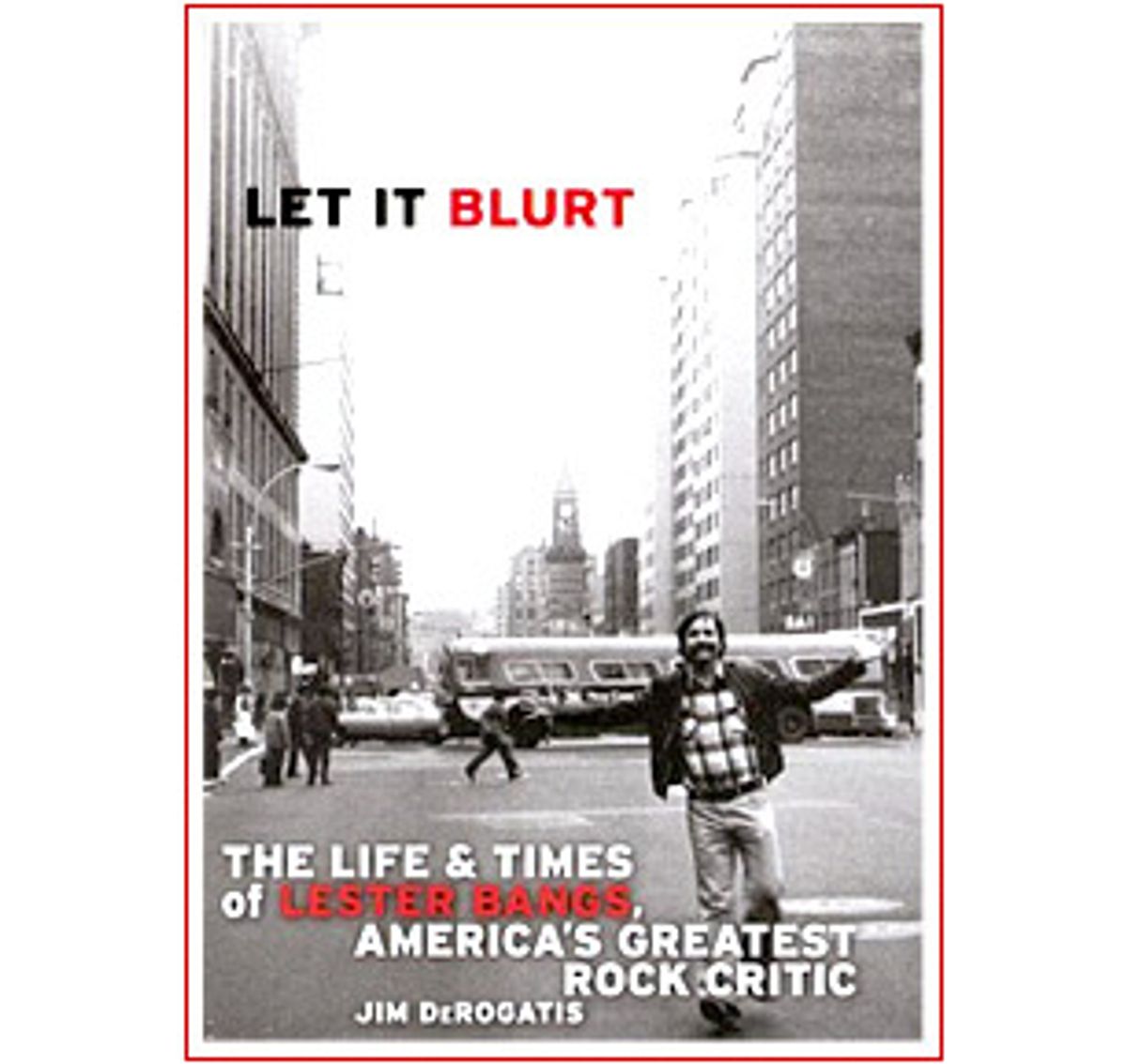 There are two ways to recall Lester
Bangs -- if anyone outside a small
circle of friends still does -- and both
of them are accurate. The man boldly
called "America's Greatest Rock Critic"
in the subtitle of Jim DeRogatis' fine
biography, "Let It Blurt," is revealed
within its pages to be a clumsy
emotional mess, a difficult and unhappy
person equally allergic to bathing,
self-discipline and romantic stability. Whether clouded or aided by the
self-destructive habits that ultimately
led him to leave this world in a New
York apartment in 1982, Bangs was a man
whose writing talent was not always in
control or on display. Hell, even the
editor of "Psychotic Reactions and
Carburetor Dung," the 1987 anthology of
Bangs' work that is now the only place
to confront it, admits in his
introduction that "Lester often wrote
poorly, passively ... quoting lyrics
rather than saying what he thought."

Curious? From a 1974 Bangs piece for
Creem that has so far eluded
republication: "The first time I saw Wet
Willie I got excited as all hell. You
would too if you were in Macon, Ga.,
whooping it up deep Friday night down at
Grant's Lounge call of the wildest
bar this side of the frontier."

But when his insights matched his energy
in the '70s, Bangs could be a
revelation. At his best, Bangs was one
of the few rock journalists -- but by no means the only one
-- who could make you
feel the urgent need to hear a record
you hadn't known existed, or convince
you that you understood the person who
recorded it.

For my money, he was no
Nick Kent (see his book of collected
writings, "The Dark Stuff," for
evidence), Nick Tosches ("Unsung Heroes
of Rock and Roll" or "Hellfire") or --
when he still deigned to write about
music -- Richard Meltzer, the one
predecessor Bangs acknowledged as an
influence. But he rarely failed to
entertain, and often did a lot more in a
critical realm that was still being
mapped and explored for what it could
add to the noise of rock 'n' roll. "Let
It Blurt" largely leaves the task of
fitting Bangs into the critical pantheon
to those who A) give a damn and B) are
willing to do independent scholarship --
which safely describes its probable
readership.

For a time, Bangs' intelligence,
imagination and outsize personality --
as established in Rolling Stone, amply
demonstrated in Creem and then buried in
the Village Voice -- made him as big a
media star as many of the musicians he
wrote about. Yet he came across in print
as a pal on a rant about some record
he'd been spinning obsessively for a
week -- or a musician he'd been talking
to. Injecting himself into his stories
let Bangs measure and describe his
unmediated responses, sharing the awe
and wonder he felt at the magic he
heard.

As an interviewer, Bangs swapped
fandom's geeky subservience for loyal
opposition. He was the courageous
emissary who kept readers in touch with
their increasingly remote idols. Always
ready to call their bluffs, Bangs faced
his subjects -- like Lou Reed, with whom
he conducted a lengthy and highly
amusing pissing contest -- as a peer and
expected them to do the same. But after
a while, Bangs' Dutch courage became
journalistic shtick. As he once
observed, "I didn't contrive an image
for myself, although for a while in
every story it seemed like, 'Lester
Bangs Gets Drunk and Insults Another Pop
Star.'" (It's hard not to see parallels
with Andy Kaufman, who also lived and
created without ever noticing the line
between acting genuinely weird and being
irresponsibly obnoxious.)

As Creem often noted in a small ad
seeking contributors, "Nobody who writes
for this rag's got anything you ain't
got, at least in the way of
credentials." Bangs' dowry was fealty to
the Beats, who inspired his personal
voice and speed-fueled meanderings, and
a love of jazz, a clear template for the
free-form riffage of his careening
literary improvisations. DeRogatis dryly
questions the legend of Bangs writing a
book about Blondie -- 96 slapdash pages
of photos and profile that read like an
interminable fanzine ramble -- in one
weekend by raising the
possibility that it may in fact have
taken twice that long.

Bangs was the precociously creative son
of a devout Jehovah's Witness, raised in
abject cultural poverty in Southern
California. The discovery of music and
Romilar cough syrup was his distinctive
prescription out, and his underground
railway was a freelance gig reviewing
records for the fledgling Rolling Stone.
He finally landed a staff job with the
Michigan-based Creem, where he wrote
hyperbolic articles like "My Night of
Ecstasy With the J. Geils Band" (which
involved getting onstage with the band
to type a supposed review in real time
and full audience view) and "I Saw God
and/or Tangerine Dream." In the late
'70s, he moved to New York, wrote for
various publications, started a band,
spent time in Texas and then came back
north and died from what DeRogatis
details as an unintended overdose of
painkillers.

"Let It Blurt" wisely avoids
sentimentality and unwarranted
subjectivity, instead bearing witness to
Bangs' life (especially his efforts to
launch himself as a musician) with facts
rather than fandom. In what has to have
been a labor of love, DeRogatis manages
to remain sober and levelheaded. Bangs
himself was never as devoted to the
careful recitation of facts, exhaustive
research or rational consideration of
details as this book.

Until an afterword that indulges in some
posthumous speculation, a justifiable
polemic against the current state of
music journalism and a consideration of
whether Bangs wanted to die, the book
walks a steady and confident line,
avoiding moralization and judgment.
DeRogatis keeps literary analysis to a
minimum, and makes a virtue of what
might have been seen as an oversight. In
the preface, DeRogatis disputes an
obituary writer's assertion that "if
all you knew about Lester Bangs were
articles that he wrote ... you knew him
quite well," and provides enough
information about Bangs' love life,
minor arrest record, psychiatric
treatment and prostitute pals to draw
extra-literary conclusions about what
came out of his typewriter.

Still, other than a premature and
ignominious death, it's not much of a
story, insignificant beyond the tiny
universe of Bangs fans and devout rock
mediaphiles. DeRogatis is both, twin
dedications that date back to 1982, when
a high school journalism assignment led
DeRogatis to interview Bangs, who
dropped dead two weeks later. DeRogatis
went on to become an editor at Rolling
Stone and is now the prickly and
high-minded pop music critic of the
Chicago Sun-Times. (He's also a good
friend, whose strong opinions and
devotions I have not always shared.)
Journalism has always been one of his
beats, and an avowed goal of this book
is to fit Bangs into the context of the
rock press by providing some history of
it.

Those of us who have been part of that
history will undoubtedly read this book
differently -- especially since
DeRogatis exercises some of his own
journalistic grudges in "Let It Blurt."
He finds fault with the selections made
for "Carburetor Dung," suggesting that the
book's editor, Greil Marcus, and his
crony, Village Voice senior editor
Robert Christgau (the self-professed
"Dean of American Rock Critics,"
described by Bangs in 1974 as "a pompous
asshole"), had their own agenda. (For
what it's worth, Christgau merits five
citations in the index of "Carburetor
Dung.")

In the book's afterword,
DeRogatis quotes Vanity Fair media
critic James Wolcott as saying Christgau
and Marcus were jealous of their
colleague "because Lester really reached
readers ... Bob and Greil have their
followers but they don't have the
intense fandom that Lester had ... You
can't imagine, like: 'Jeez, I wanna hang
out with Greil Marcus.'" And as a
carrier of the same self-expression
torch that led Bangs to be barred from
Rolling Stone's pages, DeRogatis
undoubtedly enjoyed recounting Bangs'
disillusionment and criticisms of the
magazine, where he had his own unhappy
experience.

They're not the only ones in these pages
with unhappy experiences. DeRogatis
interviewed me for "Let It Blurt," and
used an anecdote about a Ramones feature
Bangs wrote in late 1978 for Trouser
Press, a magazine that I co-founded. As
DeRogatis reports, Bangs resold the
story to England's weekly N-M-E, where
it appeared first. We never asked him to
write for Trouser Press again. Luckily.
DeRogatis writes that Bangs "disliked
Trouser Press and the New York Rocker
... and considered them havens for young
careerists and shills for the industry."
(Bangs' scorn did not, however, prevent
him from quoting several interviews from
the New York Rocker for his Blondie
book.)

It is no surprise that Bangs inspired
others to become rock journalists; it's
a drag how many of them practiced the
self-referential tale telling that was,
for him, a medium for incisive
criticism, not a substitute for it.
(That makes it all the more surprising
at the tone of this biography, which has
none of the drooling anti-hero worship
that might be expected from a Bangs
acolyte.)

The historical tragedy, as DeRogatis
notes, is how Bangs and his kind were
marginalized and then ostracized by the
explosion of music journalism they
engendered. As Bangs discovered at the
increasingly "professional" Rolling
Stone, freewheeling first-person
hysteria was fine until people started
to take rock criticism seriously as a
business. Once mainstream media got into
the act, the self-invented extremists
got pushed off the stage.

What was once
garret zealotry -- practiced by
idealists driven to spew, destroy and
proselytize -- is now well-paid
product-shilling, adult-dream celebrity
worship written by well-funded content
providers, pushed by powerful flacks and
neutered by timid editors. Even the
largest and most established music
magazines lack the spine to disagree
with their readers. So Bangs died in
vain. At least he didn't live to be
disgraced by it.

I bought a Rolf Harris album off Lester
Bangs once. It was at some record
convention in New York, and I remember
thinking it odd that a big-time rock
critic -- something I myself hoped to be
one day -- would be selling his records.
It also bothered me a bit that "L.
Bangs" was scrawled in ballpoint pen on
the back cover, but I had never heard
the original version of "Sun Arise," a
cool song Alice Cooper had covered, and
I had bought a 45 of the oddball
Australian's "Tie Me Kangaroo Down,
Sport" as a kid, so the buck or three
seemed a worthwhile investment. It was.