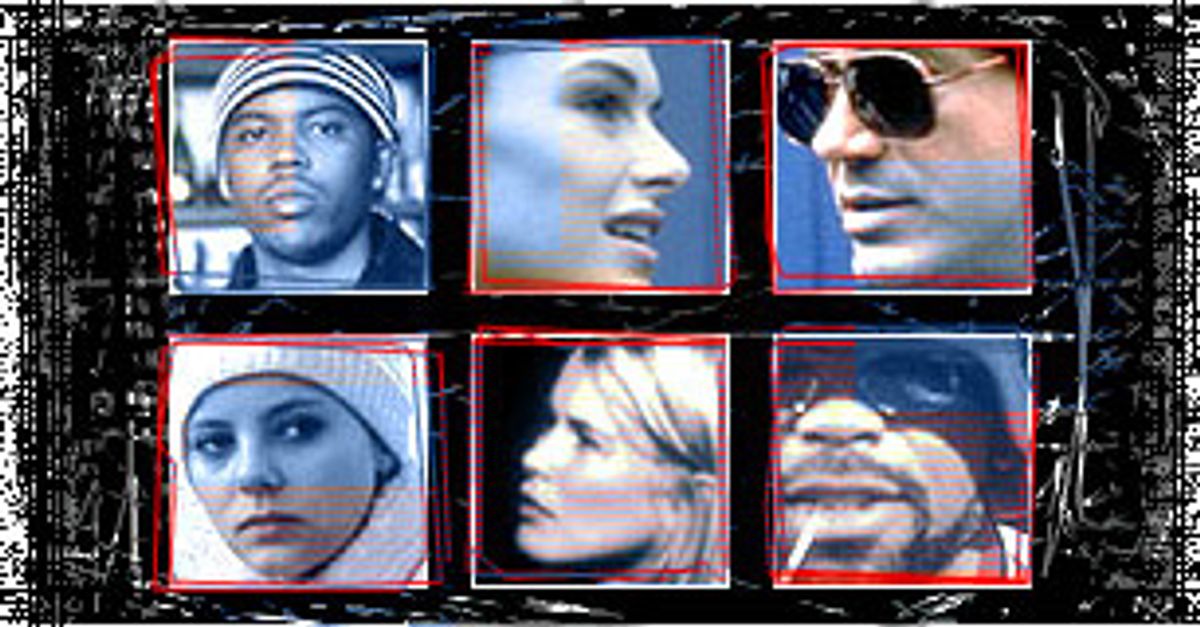 In his new film, "Black and White," James Toback has gotten hold of a great subject: the infatuation privileged white kids have with hip-hop. In an early classroom scene, a young black girl talks about how all the white kids she knows romanticize the ghetto life they've heard about in hip-hop songs, while all her black friends are doing what they can to get out of the inner city. The elevation of street life to the most glamorous and up-to-date adolescent fantasy has the sting of a nasty joke. If the bleakness and crime of black inner-city life seem insurmountable, what better vengeance is there than to make that life seem desirable and then rake in the profits from the white kids who are ready to embrace hip-hop as an authentic, gritty side of life that their own sheltered existence has protected them from? Hip-hop, in the movie's view, is a way of playing the hand you're dealt as a form of revenge.

But Toback is much more a fantasist than a sociologist. The kick of some of his previous films, particularly "Exposed," came from the intersection of his fantasy worlds, the heated-up meeting of high fashion, high culture and pulp lowlife. Had he let his fantasies run wild and conceived of "Black and White" as a (no pun intended) dark comedy on the combustibility of race relations and pop culture's tapeworm ability to infect anything with glamour, the movie might have been satirically explosive.

Toback's provocateur instinct is periodically at work in "Black and White," particularly in the first scene, where two white girls have a threesome with a black gangster in a secluded part of Central Park. (When a couple of little kids come upon the copulating trio, the hood's henchman points a gun at the kids to scare them off.) But for the most part Toback approaches his movie as sociological investigator, a role for which he has neither the temperament nor the discipline. The cast is filled with the totems of his cherished fantasy worlds: beautiful young people (particularly young women), pop music (members of the Wu-Tang Clan play various roles), fashion (in the person of Claudia Schiffer), sports (Allan Houston of the New York Knicks in a key role) and particularly his White Negro reveries of black virility and power. Mike Tyson, playing himself with his odd, light little voice, is the movie's unforgiving black sage, the same function that great football player Jim Brown filled in Toback's first film, 1978's "Fingers"; it gives some indication of how far-out Toback's fantasy life is that a convicted rapist is presented as a fount of hard wisdom.

The joke of "Black and White" is the shifting social barriers that allow these worlds to interact. It's a good joke. (It was reported that at the opening of the Metropolitan Museum of Art's "Rock Style" exhibit this winter, Henry Kissinger, after being introduced to Sean "Puffy" Combs, asked someone, "Vy does he call himself 'Fluffy'?") The impact of the movie is meant to come from the moments when the representatives of the various groups feel their existence threatened and circle the wagons, making those barriers suddenly impenetrable. Unfortunately, the movie has the fatal feel of those films in which the director seems more interested in throwing a party than in directing, bringing all his interesting friends together for the sheer audacity of having them in the same room. Method Man, meet Marla Maples.

Some of the cast members rise above the mess. As one of the wigga wannabes, Bijou Phillips' antsy demeanor and nasal, Betty Boop voice are dead-on hilarious. She's the marriage of white privilege and black affect; you can't help laughing at the sight of this hot-to-trot peroxided pixie ending a call to her boyfriend with "I'm'a call you. Aw-ight?" She's like an amphetamine version of the blank and calculating young things who peopled Jean-Luc Godard's '60s movies. Brooke Shields, as a documentary filmmaker hanging out with Phillips and her gang, and Robert Downey Jr., as her gay husband, are a remarkable comedy team. Shields, who in the old days was nearly always a wooden presence, is game and canny as an opportunistic scene maker donning the role of cultural anthropologist. And Downey, who doesn't even try to be subtle, swans about outrageously. They have the movie's funniest sequence. Encountering Tyson at a party, Downey, practically swooning from the "Pleasure me, Mandingo" fantasies racing through his head, comes on to him. Tyson responds by trying to strangle him. Shields provides the perfect capper. After calming things down and getting her husband safely out of Tyson's clutches, she can't resist coming on to him, either.

Toback's love of improvisational immediacy is apparent in about half of the scenes. But where his last (and best) film, "Two Girls and a Guy," gave us the fruits of improvisation, "Black and White" is content with the pips. There's some of John Cassavetes' unmediated pushing for "truth" in "Black and White," that phony aesthetic that holds that shaping a scene is tantamount to falsifying it. That approach is tantamount to boring the audience, and even with the spiky potency of its subject, "Black and White" is Toback's slackest piece of direction. The formlessness in the improvised scenes is even more glaring in contrast to the scripted ones, most of which are painfully artificial.

The scripted scenes follow a crooked undercover cop (Ben Stiller) as he frames a college basketball star (the Knicks' Houston, who has a natural, unforced presence) so the kid will be pressured to provide information on a black gangster he's known since childhood. But the cardboard familiarity of these characters and their situation undermines Toback's determination to get at the messiness of contemporary race relations. And Toback gives in to the worst clichis when he presents Houston's grad-student girlfriend (Schiffer) as that most vicious of stereotypes, the white ice-goddess bitch who lures black men to their doom.

The structural mess of "Black and White" is all the more disappointing given Toback's blunt, chancy take on hip-hop. In this movie, the gangstas really are gangsters. The Wu-Tang Clan's Power plays Rich, a hip-hop impresario whose real capital comes from being a crime lord, and his would-be star, Cigar (Wu-Tang's Raekwon), is also his chief henchman. They treat the music business as just another racket they can muscle their way into. When the owner of a recording studio (Toback, in a funny cameo) explains to them that he's too booked to give them studio time, Power says to him, "This is why people get hurt," and he leaves no doubt that it's a threat. Rich and Cigar are thugs with a large racial chip on their shoulder; their antennae are always out for what they perceive as disrespect, and they justify their threats and brutishness by rationalizing that the whites they squeeze are probably racists anyway.

Toback doesn't buy into the liberal apologia of hip-hop as the authentic voice of the streets (the same argument that was used in the '70s to justify the worst excesses of blaxploitation films). He doesn't pile on any hearts-and-flowers excuses for Rich and Cigar's thuggishness. And Houston's character, who grew up in the same neighborhood Rich did and who has taken a very different path, clearly implies that the thug life is not the only one open to young black men. The thing that makes it tough for me to criticize hip-hop is that the people who are most vocally opposed to it use the same arguments that have always been used against rock 'n' roll; they're almost obscenely eager to reduce those who play rock or listen to it as vulgar cretins. That view figures prominently in Stanley Crouch's rave for the film in the current Talk magazine. He's a smart, gutsy critic -- and his argument for the film is persuasively reasoned -- but I've never been able to stomach his fuddy-duddy contempt for rock music.

But it's not endorsing censorship to say that there is something appalling and puny about the guns, money and ho's braggadocio of much hip-hop. When Bruce Springsteen sings in the first person as Charley Starkweather (or to use a less articulate example, when Mick Jagger sings as the Boston Strangler), I can still hear an artist's distance and control articulating a murderous state of mind. There's an even more ironic distance in the pulp-horror scenarios of "Momma's Gonna Die Tonight" or "Cop Killer," both of which Ice-T performed with his thrash-metal band Body Count.

But for the most part I hear no distance in too many of hip-hop's fantasies of violence and macho sex. There seems to be something approaching racism in the insistence that those fantasies are an authentic expression of black experience (it would be like arguing that Clint Eastwood movies are the truest expressions of being a white male in America), and in the reduction of the human striving that cuts across all races to the most naked materialism. In the current issue of Cineaste, in a perceptive piece on the rise of black middle-class romantic comedies, Mia L. Mask quotes actor Taye Diggs as saying, "It's important for people to know that African-Americans do more than shoot each other in the head." But I don't feel that many hip-hop performers even consider that a priority. Hip-hop has of course provided exceptions -- artists like Fugees, De La Soul, A Tribe Called Quest, Timbaland; the poignant use of the refrain from "Annie" in Jay-Z's "Hard Knock Life"; the undeniable and terrifying toting up of the cost of gangsta life in the Geto Boys' "Mind Playing Tricks on Me" (for my money, the greatest rap song ever); or even the sinuous celebration of sex on Q-Tip's solo debut, "Amplified." But for me these songs and artists remain exceptions.

That's why the most authentic thing about "Black and White" -- the presence of Raekwon and Power -- is also the most troubling. Neither of them is an actor, and neither has the instinctive charisma that has often made musicians and singers from Dean Martin to Ice Cube so effective in the movies. Power, especially, has just about the deadest eyes I've ever seen on screen. He's not a performer projecting deadness, the way that Ice Cube does in the final scenes of "Boyz N the Hood." There seems to be no separation between Power and the character he's playing. I'm not saying that he's a thug in real life, but that he evidences no inclination to question or evaluate the actions of his role. Toback miscalculates badly when he includes a shot of Power sitting alone brooding after he orders a friend's murder. He doesn't appear capable of the sort of remorse you see in Harvey Keitel after he betrays Robert De Niro in "Mean Streets." He's a hard blank slate.

But Toback's method of presenting the evidence without judgment backfires, finally appearing just as shapeless as the movie's structure. I wonder how much better a movie he could have made if instead of wanting to be Johnny on the spot with this examination of hip-hop, he'd delved into race relations via the new urban soul of artists like D'Angelo, Macy Gray and Angie Stone, all of whom have links to the '50s rock 'n' roll he still loves. Toback wants to be au courant, but as sharp and daring as he is on hip-hop, he doesn't connect with it in the way he immediately connects whenever he includes some of his beloved rock 'n' roll on the soundtrack. Listening to Rosie and the Originals singing "Angel Baby," you sense this movie's unspoken question: How did black music get so mean?