Do you really need a new cookbook to figure out how to make brownies? Are those salmon steaks really better with a packet of Butter Buds? 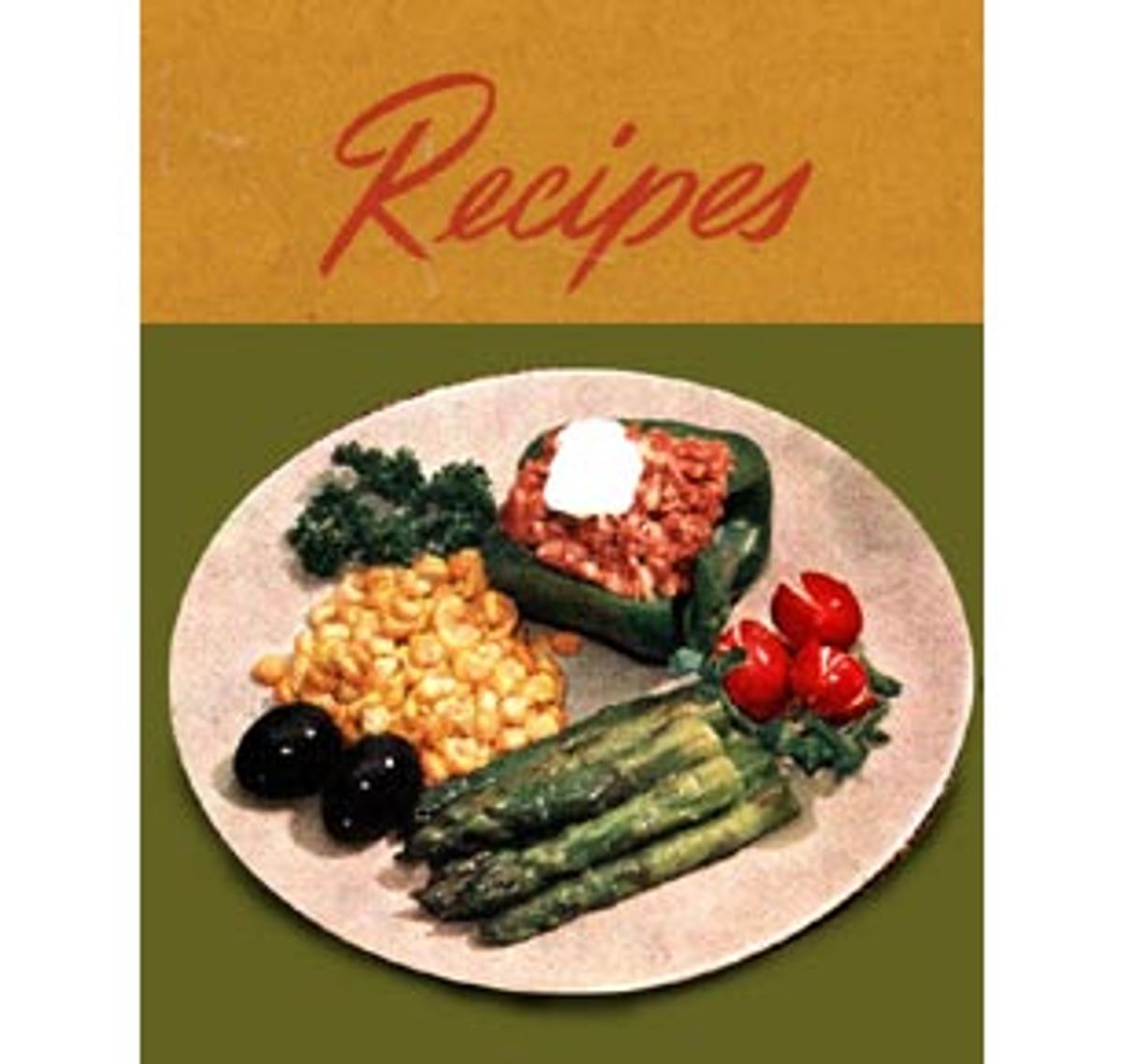 I tend to be way too easily impressed whenever I walk by the window of a catering place. "Yum! Tortellini salad!" I'll think. "Sliced tenderloin! I'm going right in and buy some." Tenderloin and tortellini salad are, of course, among the easiest foods to make at home, but the fact that they're nicely displayed in someone else's window always fools me.

Similarly, whenever I see a baking cookbook that has pretty pictures, I tend to forget that I probably have every recipe in it already. (Unless the book is one of Rose Levy Berenbaum's unparalleled "Bibles" or Flo Braker's "Sweet Miniatures" or a few other baking books that anyone with an oven and a flour canister should be required to own.) In fact, every recipe in most baking books appears, in some form, in some edition of "The Joy of Cooking" or "Fanny Farmer." It's daunting to realize how much money and shelf space you could save if you compared a cookbook's index with the one in "The Joy" or "Fanny" before you took out your wallet. The bookstore owner might not like you very much, but doesn't he want an informed customer?

Take The Magnolia Bakery Cookbook, by Jennifer Appel and Allysa Torey. This charming little volume promises "a treasure trove of deliciously old-fashioned and deeply satisfying recipes for more than 75 unabashedly self-indulgent desserts." "Wow! Tortellini salad!" I found myself thinking again, except that this time I was thinking, "Wow! Caramel pecan brownies! Oatmeal muffins! Traditional vanilla birthday cake cupcake with traditional vanilla butter cream!" (This despite the fact that I've made all three of those baked goods many, many times over the years.)

The photos in the book are great, and the headnotes are cozy. "Your mouth will be watering in no time!" ... "This scrumptious bar is a perfect blend of fruit and crumb." ... "One of our customers came into the bakery one afternoon with this recipe from his aunt, handwritten on an index card." An index card! Proof of homey greatness.

But that aunt may well have copied a "Joy of Cooking" recipe onto that index card. There just aren't too many recipes for standard baked goods out there. "We confess we've improved on a classic recipe," the authors say when they introduce their German chocolate cake. True, their recipe has a quarter-cup more sugar than the standard. True, they've doubled the standard amount of frosting, but you don't need to buy a whole separate book to help you realize that more frosting on a cake is usually better.

And speaking of frosting, the vanilla butter cream in this book is the one on the Domino Confectioners Sugar box with an extra tablespoon of milk. (It needs a pinch of salt, by the way.) Why is this vanilla butter cream so much better? The secret, say Appel and Torey, "is that we just whip it longer than you'd think necessary to get that extra-creamy texture." Again, this is not a hint you need to buy a book for. There's nothing wrong with "The Magnolia Bakery Cookbook," but cave canem. Oh, no, wait -- I mean caveat emptor. Unless you have a deep, heartfelt need to look at eight pages of color photographs, you should check your shelves before you rush out and buy this. Any cookbook author can tinker with the classics a bit, but it's almost impossible to make them really distinctive -- unless you're Rose Levy Berenbaum.

I'm not saying that you should try to save your money. Oh, no, no, no! I'll buy a cookbook if it's got even one idea that intrigues me; I like to reward the author for her ingenuity. (This is the same reasoning that made me buy Yoko Ono's "Season of Glass" after John Lennon was shot. I didn't want the record at all, but I thought I should help Ono out.) Another baking book, Butter Sugar Flour Eggs, has recipes you absolutely won't find in the average encyclopedic cookbook. The authors' crunchy chocolate hazelnut bars combine two chocolate treatments: a thick, dense, fudgy layer made with Nutella and crumbled Pepperidge Farm Bordeaux cookies, two of the modern pantry's most miraculous ingredients, and a mousse-y layer made with chocolate, whipped cream, crhme fraiche and Amaretto. The bars take about two seconds to make and have maximum showoff value.

This book has other ideas I haven't seen elsewhere. Grate frozen shortbread dough into the baking pan to give it "a lighter, more open texture." Add a cream-cheese layer to standard lemon or lime squares; add dried apricots to rice pudding instead of raisins. Use less cornmeal than usual when you make corn muffins. "You'd think that using more cornmeal would yield more corn flavor, but it doesn't seem to work that way: Cornmeal must be cut with other flours or it can turn bitter and soapy." A good corrective to my fixed notion that doubling the "good" ingredient always improves the recipe ...

"Butter Sugar Flour Eggs" also distinguishes itself with precise explanations for how certain techniques work, and with a certain bravery in authorial tone that you don't see in most cookbooks:

In the Gand household circa 1965, when Gale was growing up in Deerfield, Ill., butter was the fifth food group. Whole categories of foods were seen as vehicles for butter: muffins, bagels, vegetables, bread, biscuits. Like many schoolchildren, Gale churned butter for the first time in history class, not a dairy barn, but she took to it right away. Soon she was making large batches at home, mixing it with sugar, and hiding the resulting paste in the back of the cupboard to eat by spoonfuls. No wonder she became a pastry chef!

On the other hand, some of the writing you should just bleep over. The chapter introductions in this book are a total waste of time -- rapturous, overwritten space-fillers. ("Young cheese is a placid and contented milkmaid, soothing and comforting everyone with her strong, milky-white arms.") So are the suggestions at the end of each recipe for what to drink with it. ("The warm flavor of butterscotch calls for an iced earthy, full-bodied coffee like Indonesian Java. To contrast the creaminess of the pudding, drink it black -- maybe even with coffee ice cubes so it stays extra-strong.") And the book has oddly unattractive photography; perhaps the stylists were aiming for an "anyone can make this" feeling. The cover photo shows some berries piled up on a meringue layer in such a way that you know the berries will spill and smash the minute you try to cut the cake. But we don't buy cookbooks for the photography, now do we?

"One thing people don't understand about cooking," says my daughter, "is that just because you can add butterscotch chips or caramel doesn't mean you should." She was studying a recipe in Cooking Contest Cookbook: a macadamia fudge torte with a pear, chocolate-chip and macadamia-nut filling and a sauce consisting of "one jar butterscotch caramel fudge ice cream topping" mixed with milk. The thing is, the recipe won the $1 million grand prize in the 37th Pillsbury Bake-Off, so I guess my daughter and I are wrong.

We are also wrong about white chocolate strawberry dream pie, in which you combine strawberry ice cream and almond liquor, pour them into a "purchased butter-flavored" pie shell and top them with a white-chocolate mousse. You'd think this would have achieved more sweetness, blandness and fattiness than any one dessert could sustain, but no. "I sometimes make it even more decadent by serving" -- yes! -- "caramel sauce with it," confides the pie's creator, Edwina Gadsby of Great Falls, Mont. And again, she must know what she's talking about: The pie won first place in the Darigold Quick Fixin's with Mix-Ins Contest.

I never make cooking-contest recipes, but they're just about my favorite thing to read, and "Cooking Contest Cookbook" has almost everything that makes this genre great. First, there's the piling-on of ingredient after ingredient, which is hardly confined to desserts. See, for instance, Rozanne Chan's Thai'd-and-true strawberry and pasta toss ("toss" is a big word in contests), which combines strawberries, cabbage, bean sprouts, spinach leaves, radishes, angel hair pasta, cilantro, peanut butter, lemongrass, mashed strawberries and "chopped roasted peanuts and scallion brushes" as a garnish. A garnish on a salad -- that's true cooking-contest spirit.

And then there's the inspired use of brand-name products. By "inspired" I mean "dragged in in the most outlandish way, just to make the recipe qualify for the contest." Grilled salmon steaks with ginger-chive sauce are perfected with the addition of "one packet Butter Buds, undiluted." (Guess who sponsored the contest?) Garlic-crusted Tuscany burgers would be fine, or at least OK, as is; the addition of "1/2 cup Kretschmer Original Toasted Wheat Germ" makes them, I guess, magnificent, just as that cup of Fiber One cereal makes all the difference to Edwina Gadsby's pork chops Cubano.

Yes, that's the same Edwina Gadsby who sometimes puts caramel sauce on her white chocolate strawberry dream pie -- which brings me to my only complaint about "Cooking Contest Cookbook": Why aren't there headnotes to describe every contestant? Why do we meet Gloria Pleasants -- "It may be that her training as a pharmacist prepared her to understand what makes a delicious recipe" -- and not Fran Yuhas, who came up with the name "Grecian skillet rib-eyes"? I still cherish the memory of a Weight Watchers cooking contestant who had "written 900 poems, some of them published." If this book had more headnotes like that, I'd never read anything else again.