The young and heartless seduce the old and foolish, in a satire of p.c. Puritanism on campus. 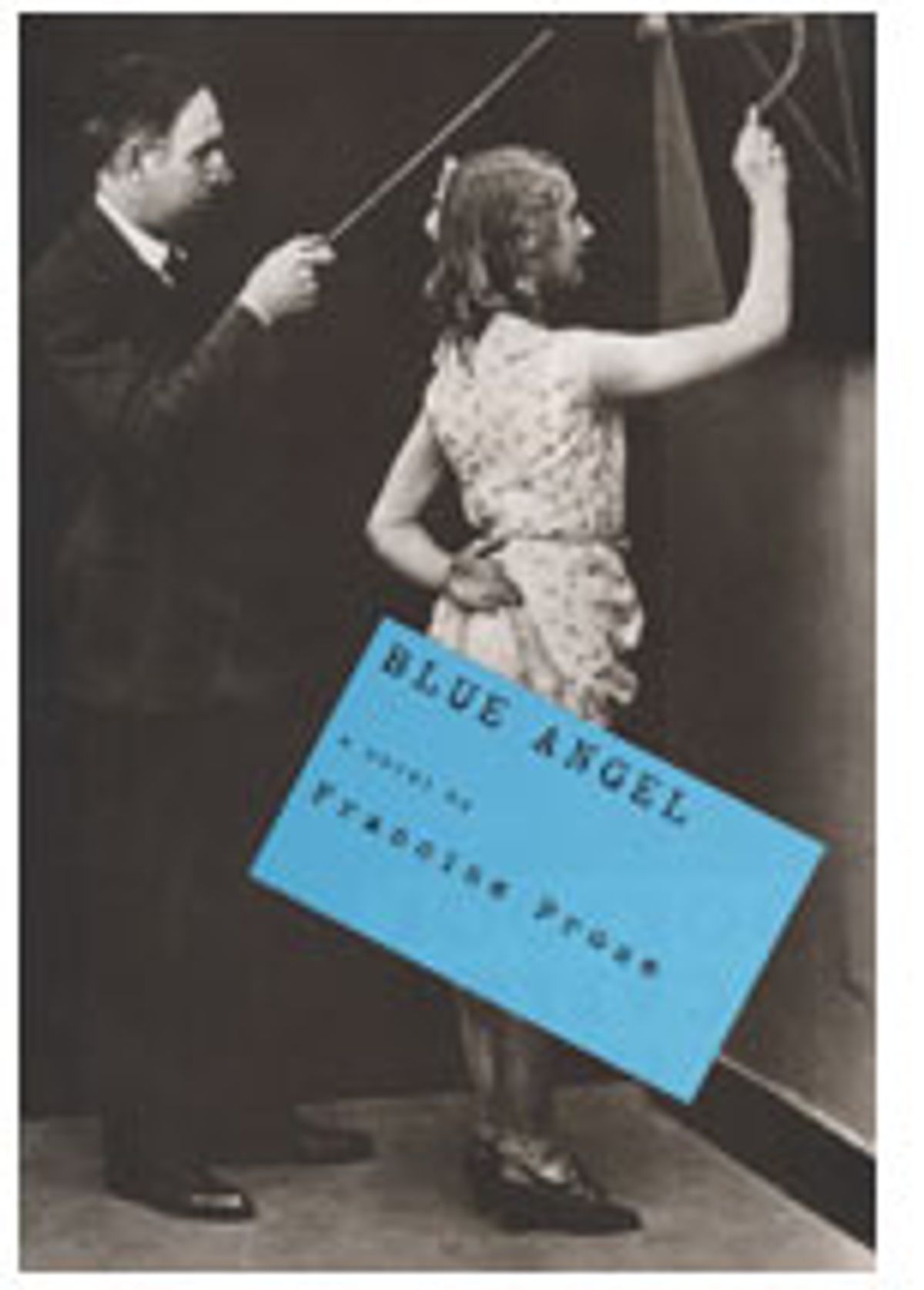 Ted Swenson has an enviable life as writer in residence at beautiful, bucolic Euston College. His teaching load is obscenely low: one two-hour session a week with a class of nine aspiring undergraduate writers. He has tenure, a witty, sexy wife and ample time to work on his next novel.

Only his novel stinks and his most closely guarded secret is that he hasn't worked on it in years. His other two books are out of print and he's approaching 50. In other words, the hero of Francine Prose's 11th novel, "Blue Angel," is in hell. And when he starts obsessing over the work of a talented and enigmatically seductive student -- soon after the dean's warning to the faculty about the growing threat of sexual harassment litigation -- we know that life in hell is going to get a lot worse.

Prose has taught writing at numerous colleges and is clearly appalled by the puritanical mood on campus today. Yet her dissection of the chilly campus climate goes way beyond simple p.c.-bashing. Things weren't so good in the old, pre-feminist days, either; Swenson's wife, Sherrie, the college nurse, has seen enough students "destroyed by faculty Romeos." But nowadays the students seem oddly childish and fearful. At the heart of the malaise lies an odd sense of entitlement -- the students' insistence that they don't have to hear anything they might find disturbing or that might make them feel "unsafe."

But learning is unsafe; thinking is unsafe. Swenson and his faculty colleagues take cover behind cautious language, and it's this corrupting betrayal of language that makes Prose particularly furious. Her hero dumbs down his criticisms of student work, performing "the weekly miracle of healing the terminally ill with minor cosmetic surgery." Some of the other, rather predictably portrayed English department members (its one deconstructionist, its one feminist) have taken an easier way out and actually believe the banalities they teach.

"Everything we read turns out to be the same story," complains Angela, Swenson's one talented student, "the dominant male patriarchy sticking it to women. Which I guess is sort of true ... except that everything isn't the same."

This novel tells a different story. I trust I'm not spoiling anything for you if I reveal that a book called "Blue Angel" is about the young and heartless seducing the old and foolish. The seduction is as literary as it is sexual: Angela privately begins to hand Swenson pieces of the novel she's writing, which Prose makes compelling enough to ensure that Swenson and we, Angela's other readers, are hooked.

The erotic energy of the situation (writing as seduction and power trip, reading as willing submission) keeps "Blue Angel" hurtling ahead for perhaps its first half. And then, surprisingly, it becomes bleak and almost plodding. A lot of creaky plot mechanics get set in motion. A sense of inevitability creeps in: Swenson's transgressions pile up like documents in a prosecutor's dossier, unrelieved by any of the go-for-broke hilarity that Jack Nicholson, for example, brought to the male writer's impotence in "The Shining." (Why is it that the writer who can't write has become our universally accepted emblem of the lost soul?)

It's not that Prose can't "do" male acting out -- she did it brilliantly in "Guided Tours of Hell," in which two participants in a Kafka symposium are helpless to stop one-upping each other, even while touring Auschwitz. But in this book she seems to have handed Swenson over to Angela: He becomes a sinner in the hands of an angry, uncontrolled and gleefully experimental student writer. Maybe this fate is intended as his punishment, but it still feels labored -- or, as Angela might say, "technical."

Many of Prose's previous novels, including my favorites, "Bigfoot Dreams" and "Primitive People," have loopy, meandering plots that don't go much of anywhere but feel spacious all the same; they unfold into "the open destiny of life" that Grace Paley has said "everyone, real or invented," deserves. "Blue Angel," in piling up evidence, incident and literary reference, feels cramped and airless.

You could argue -- as Swenson's students might -- that this constriction was intentional. In fact, I so enjoyed parts of "Blue Angel," and so wanted it to work better than it did, that I briefly tried the ever feeble "meant to feel that way" defense myself. To no avail: Try as I might to explain away its shortcomings, "Blue Angel" definitely sags. Which is a shame, because it's such a smart and savage take on a contemporary mood -- a rueful meditation on the slippery slope from self-consciousness to self-regard to self-destruction, a study of the dumbed-down banality of mischief.