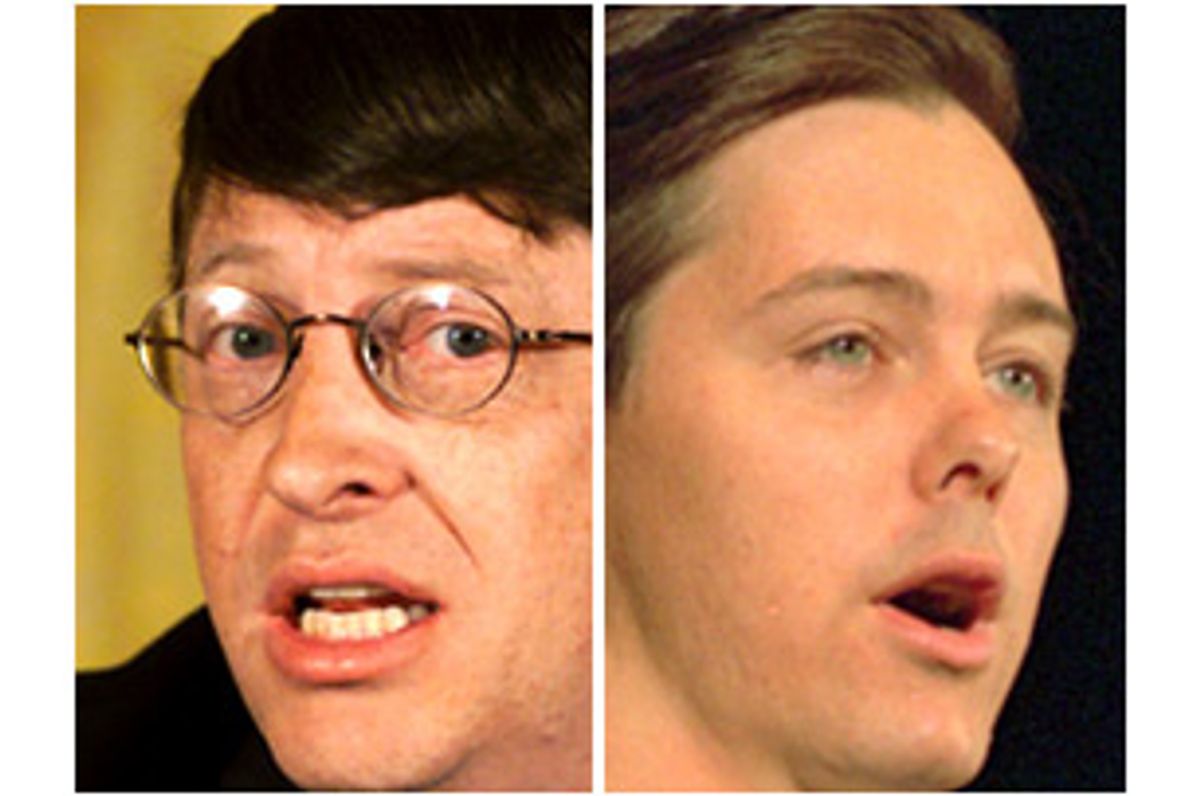 Poor Microsoft: The company just can't step into the public eye without getting egg on its geeky face.

For years Washington insiders complained that the giants of the personal computer industry, led by Microsoft, needed to get smart about the Beltway and hire lobbyists to defend their interests -- before government regulators started getting medieval on them. The software barons, it was said, needed to learn to play the game of politics like pros.

Well, in the two years since the Justice Department filed its antitrust suit against Microsoft, the company has certainly started investing more of its vast reservoir of cash in the strange business of political influence buying. But now, with Tuesday's revelation in the New York Times that Microsoft has hired the services of former Christian Coalition leader and current George W. Bush insider Ralph Reed to lobby the Republican presidential hopeful on its behalf, the software company's get-smart strategy looks dumber than ever.

The Times reported that Microsoft had retained Reed's firm, Century Strategies, to contact key Bush supporters and insiders and persuade them to send letters of support for Microsoft to Bush. After the newspaper published its story, Century Strategies issued an apology: "We should have been more sensitive to possible misperception." It announced that in fact Reed had never personally lobbied Bush on Microsoft's behalf, but that it would nonetheless adopt an "abundance of caution" and henceforth cease "encouraging citizens to make their views known to Governor Bush's campaign."

What a mess! Instead of discreetly pulling the levers of power, Bill Gates' company is on public display as brazenly trying to buy its way into a presidential candidate's graces. Instead of beginning to repair the months-long trial's damage to its public credibility, Microsoft has yet another public relations fiasco on its hands (and just when memory of the company's infamous "Astroturf"-style lobbying plans was finally beginning to fade!). Instead of capitalizing on the statesmanlike images of Gates appearing on Capitol Hill right after the antitrust verdict without complaining about it, Microsoft is right back at square one as the Clumsiest Company in Washington.

How did Microsoft get here? It's not too hard to figure out. The company has always cultivated a bunker mentality; Gates and his lieutenants motivate their troops by inculcating the notion that Microsoft's vast profitable business is always just one step from extinction. If "only the paranoid survive," in Andy Grove's phrase, then when times get tough, the paranoia ratchets up. If your cause is survival -- rather than, say, eking out an additional $100 million of profitability or "cutting off the air supply" of some competitor -- then it becomes that much easier to let the end justify the means.

And so, under pressure of the antitrust trial's blows, Microsoft executives no doubt began to imagine an escape route via a Republican presidential win in November. You can just hear Gates or Microsoft CEO Steve Ballmer barking: "What's the shortest distance between us and W.'s ear?" Answer: Ralph Reed.

Who cares whether Reed's camp embraces stifling freedom on the Internet in the name of family values? So what if Gates' own private foundation funds birth-control programs around the world that Reed probably believes damn the billionaire to an eternal inferno? This is about survival, remember?

We'll never know whether the money Microsoft shelled out to Reed actually made any difference to Bush. Previously in the campaign, when asked about the antitrust case, the candidate made noises that "the question should be innovation as opposed to litigation" -- code words for "I think Microsoft is right." Once the court's decision came down against the company, Bush promised to "fully enforce antitrust laws to foster competition and innovation, to protect consumers, and to guard against anti-competitive conduct." Read that closely and you'll find that while it sounds good, it doesn't outright contradict the previous "I think Microsoft is right" at all.

It's hard to imagine how this situation could possibly have turned out worse for Microsoft. The company fails to win the influence it tried to buy; it's actually tougher now for Bush to act on Microsoft's behalf even if the candidate wanted to, for fear of appearing to have been "bought." Microsoft ends up looking like the heavy, again. And at the end of the day the firm ends up awkwardly in bed with a conservative fundamentalist whose views remain repugnant to some significant portion of the software-buying public.

At the time Microsoft first hired Reed, in 1998, he hadn't yet signed on as a Bush advisor; he was merely an influential conservative working hard to move himself from the fundamentalist fringe into the Republican mainstream. Gates and company probably thought they'd had a stroke of luck when their lobbyist ended up as a key insider in the Republican candidate's campaign. Now they are probably cursing the same luck.

Of course, all this trouble could have been avoided from the start. Reed would never have signed onto the Microsoft team in the first place if only he'd paid more attention to a critical piece of information widely available on many Web pages: that Bill Gates is in fact the Antichrist.