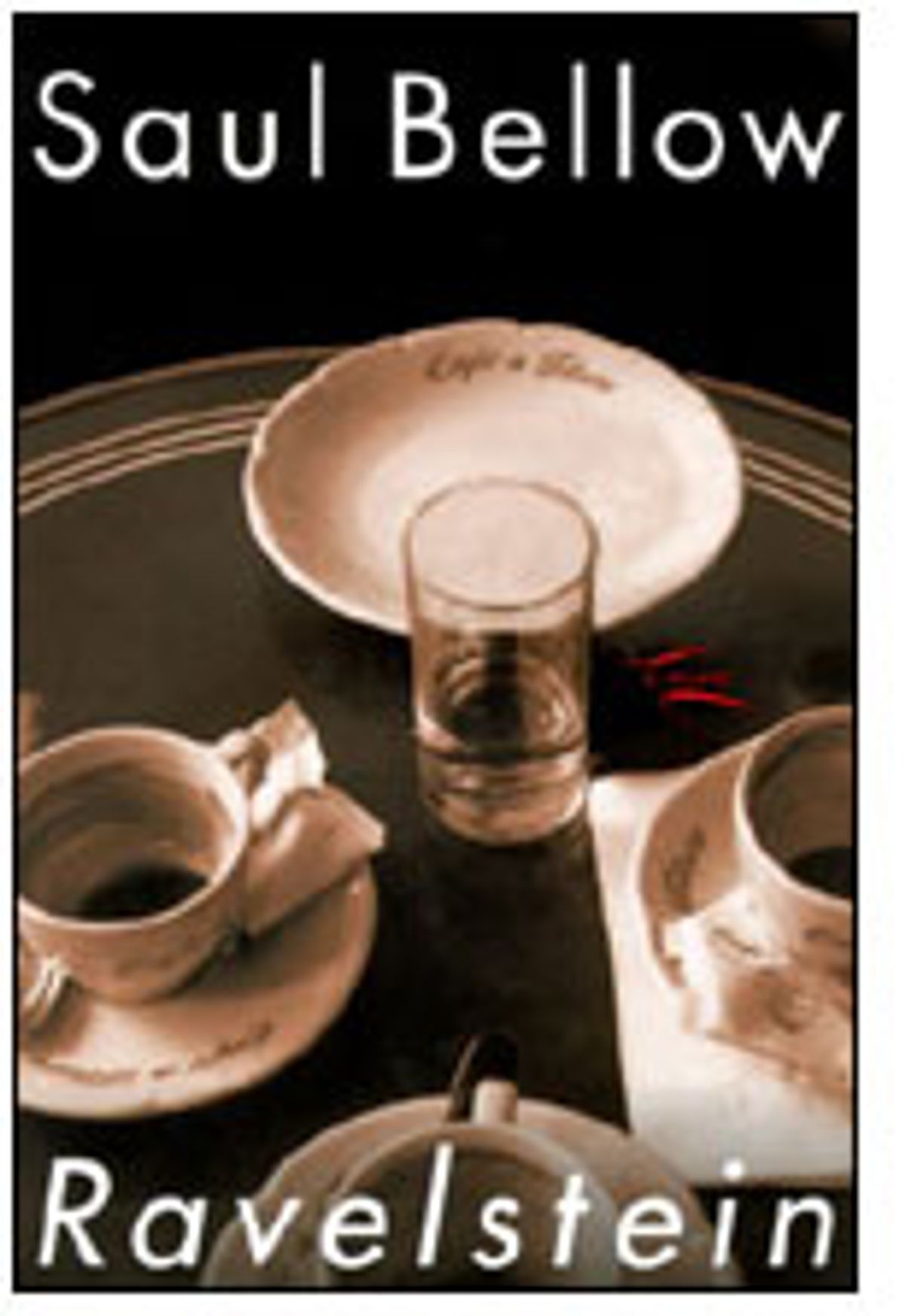 "Ravelstein" is a memoir masquerading as a novel masquerading as a memoir, a roman ` clef stuffed with more literary chitchat and self-congratulation than gossip, a tendentious, intermittently brilliant portrait of an actual friendship in certain ways as strange, if not always as interesting, as fiction.

The plot is, by Saul Bellow's standards, simple and didactic: Ravelstein, a right-wing scholar known for his commentaries on Jean Jacques Rousseau, urges his colleague Chick, a famous elderly novelist, to divorce his cold, unfaithful wife, Vela. After Vela beats Chick to the punch, the novelist marries one of Ravelstein's favorite graduate students, Rosamund, who "had studied love -- Rousseauean romantic love and Platonic Eros as well, with Ravelstein -- but knew far more about it than either her teacher or husband." She proves the depth of her love, and earns her place in the story, by nursing Chick back to health after he nearly dies from eating a poisonous fish on their honeymoon.

In the meantime, Chick has persuaded Ravelstein to publish a popular version of his theories -- a tirade against American higher education, political correctness and rock 'n' roll and an exhortation to take up the proper business of the soul: among other things, "to seek its missing half" in another person, to achieve a "love that bears it out even to the edge of doom." The book becomes the sleeper hit of the decade, raising Ravelstein out of obscurity and making him rich. Soon afterward, he is diagnosed with HIV. On his deathbed he enjoins Chick to write the story of their life together.

These events mirror several widely known events and circumstances of Bellow's later years: the May-December romance that redeemed his views of marriage; the bad fish that almost killed him; and his friendship with the late Allan Bloom, his colleague at the University of Chicago and the author of "The Closing of the American Mind." For long stretches of the novel, Bellow relies on the reflected glory of his and Bloom's real-life fame to lend the novel light and heat -- a risky strategy at best. Hanging out at Chick's country house, Ravelstein says things like, "Can you explain what Nature does for you -- a Jewish city type? You're not a Transcendentalist update," and Chick answers, "No. That's not my line." If you don't really care whether Bellow thinks of himself as a "Transcendentalist update," and if you don't buy his repeated suggestion that the two men have formed a kind of miniature Bloomsbury group, spreading enlightenment into the innermost corridors of power (a former student in the Defense Department feeds Ravelstein news of the Gulf War hours ahead of CNN), then this kind of mutual navel gazing -- and there's a lot of it -- will probably leave you cold.

But like "Humboldt's Gift," Bellow's fictionalized portrait of poet Delmore Schwartz, "Ravelstein" is saved by the overwhelming presence of its title character. He is a quintessential Bellow creation: a tough-talking Midwestern Jewish dandy from the wrong side of the tracks, a deeply eccentric scholar who revels in his appetites for luxury, books, gossip, basketball, Marlboros, baroque music and (as a self-proclaimed "invert") men. And Ravelstein embodies a quintessentially Bellovian fate. Bellow has always been fascinated with the permeability of high and low culture: His poets write hit screenplays, his Chicago cops hobnob with famous intellectuals, his hit men know their way around Savile Row. Cultural mobility acts in his novels, in the way that social mobility often acts for the Victorians, as the prime mover of coincidence. It opens secret doors, orchestrates weird meetings and reunions and, not least, plucks the Jew out of the margins and places him at the center of American life.

Seen in this light, the unlikely success of "The Closing of the American Mind" and the brief sway it exerted, from such unlikely quarters, over the imagination of the country at large are the fulfillment of a prophecy as old as "The Adventures of Augie March," the 1953 picaresque novel in which Bellow's working-class intellectuals first took on the big questions of American life as they shouldered their way out of the ghetto. This imitation of art by life is hardly lost on the novelist. One comes away from "Ravelstein" with the sense that if Bloom had not existed, Bellow would have invented him -- and that the result might have been a better novel, less bloated by the vanity of the frustrated political and academic macher, less concerned with impressing upon the reader Bellow's importance and the importance of the company he keeps.

When Ravelstein dies, "Ravelstein" falls apart. Rosamund, the ostensible center of the love story, beggars Bellow's powers of description. Chick praises her, at length, for being pretty and poised and for loving him -- but that's it. Alone among Bellow's women (who are among the most formidable sex objects in 20th century American fiction), she never comes alive. Vela, however much Bellow trashes her, is sexier because she's trouble, the way real people are. Rosamund serves his purposes too neatly. Ravelstein, following Plato's Aristophanes, claims that we fall truly in love when we recognize the missing half of our soul in another person, but Rosamund inspires no such recognition. She's too convenient; she's no more than what Chick, and Bellow, need her to be.

Without strong characters, Bellow is never half as interesting as he and his fans think he is. In his fiction and his nonfiction, too, he has always been too vain to write convincingly about himself. When he wastes the last third of "Ravelstein" on the symptoms of Chick's illness and the miraculousness of his love-induced recovery, he sounds old and stale. But neither this waste nor the "suffisance" (Bellow's word: "self-importance and self-gratification") that pollutes the book from start to finish quite overshadows its grandeur.

What saves Bellow in "Ravelstein," and has saved him a hundred times in his other books, is his susceptibility to those characters who, like Ravelstein, draw him outside himself -- a susceptibility that has nothing to do with compassion or convenience and everything to do with the way a man lights his cigarette or a woman buttons her dress, a helplessness before the intuition that human beings exist and have heavy, fascinating bodies and brains of their own. At one point Ravelstein tells Chick "that all kinds of creatures imposed on me and wasted my time," and Chick replies, "In art you become familiar with due process. You can't simply write people off or send them to hell." That is Bellow the artist, Bellow the democrat -- not Bellow the culture snob or the venerable Nobel laureate. That is the Bellow who brings Ravelstein, and "Ravelstein," to life.