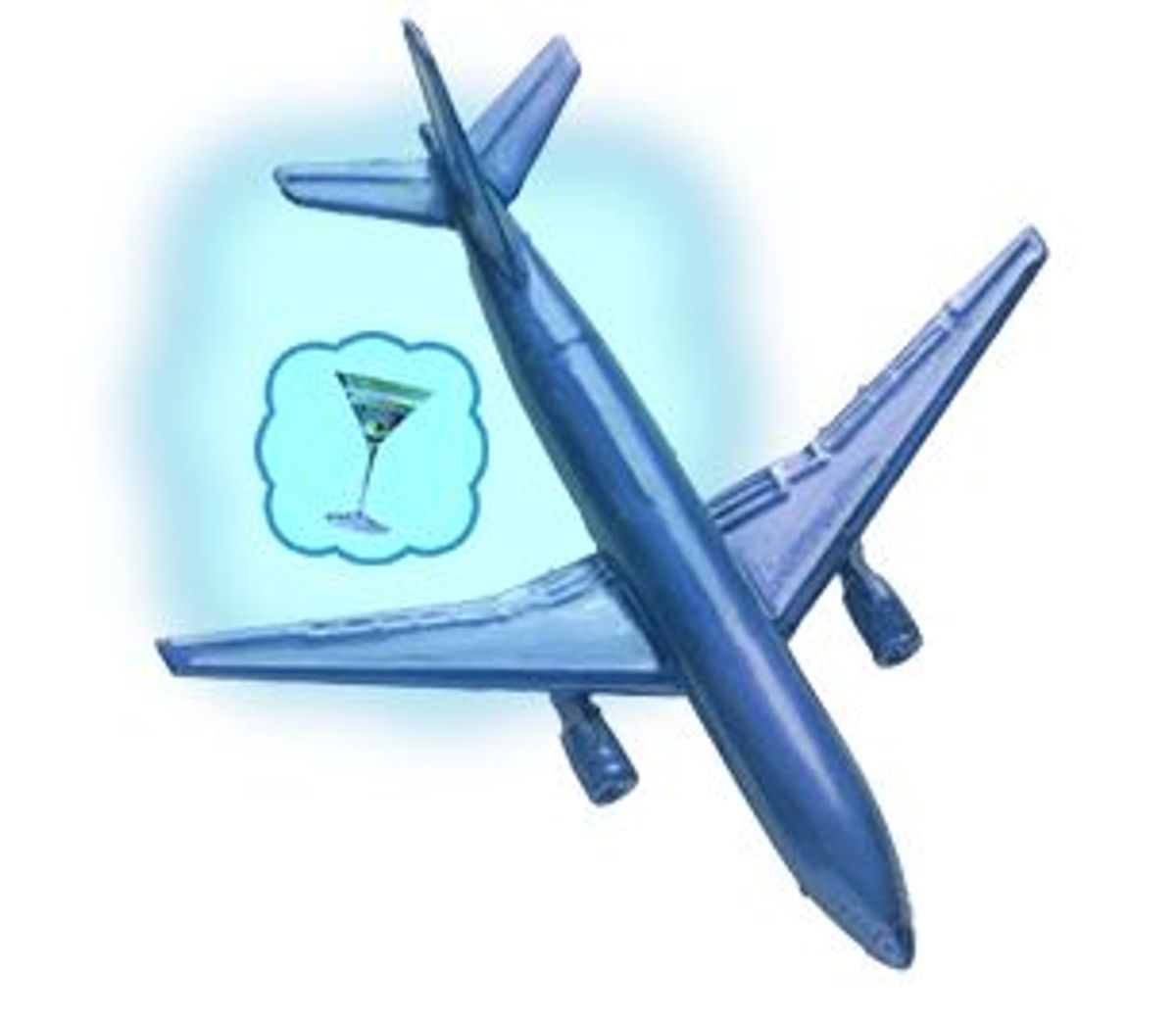 (Everything started out fine.)

A couple Saturdays ago I was at home, doing laundry and baking cookies. By Monday afternoon, I was on a plane headed for London.

"South Park: Bigger, Longer & Uncut" is being released on video in England, and a new season of the "South Park" series is starting in France, which meant Matt and Trey had to jet over there and do all sorts of press. Two days before departure, Trey calls and invites me. I am not entirely surprised.

(What has happened to me? Have I lost all perspective? What kind of a dick goes on an all-expense-paid, first-class trip to London and Paris and is not fully blown away by it? Yes, I am very grateful. No, I don't think I deserve it. It's just that this life has afforded me so many opportunities, each new one makes the last one less distinct. Just when I think things can't get better, life cranks up a notch. And it seems like it is never going to end. But it has to, right? My favorite -- and the least likely -- termination scenario involves 10 more years of playtime, another five or so for reflection and mental percolation and then two more to write a novel. More likely, there will be a plane crash.)

We fly out on Virgin Upper Class, which actually positions us, on a Boeing 747-400, farther forward than the cockpit. Right up there in the nose. The seats are gigantic, with automatic leg rests and lumbar supports, and there is enough room for a flight attendant to stand between you and the seat in front of you. There are also complimentary toilet kits and champagne. But what pushes it over the edge for me are the purple sleep suits, complete with booties. I stole the entire outfit.

(Actually, what pushes me over the edge is the peek I sneak at the itinerary. It shows the total cost of airfare: $11,181. But this is not what gets me. It's that I am not remotely daunted by this amount of money, despite it being the equivalent of several months of my salary.)

We touch down at Heathrow at 11 a.m. Our bodies think it is 2 a.m. This will be a persistent problem.

No matter. Off to the hotel, One Aldwych, right in the thick of things. Trey and Matt each have a suite. Jennifer and I each have our own room. One Aldwych calls itself a modern luxury hotel, and it delivers. The place is crazy good. There are two fresh plums on a small silver tray sitting on the desk in my room. I set my bags down, take off my shoes. My thumb presses the plum gently onto the knife blade, and I spin the whole thing around, pivoting on the pit. With a twist, half the fruit comes away. I think to myself, if the fruit tastes sweet it will be a good trip.

(What am I doing? Why even consider the chance the trip will be bad? It's an all-expense-paid first-class package to Europe. Why am I pondering a bad outcome?)

As Matt and Trey begin their first afternoon of press, Jennifer and I spend time in One Aldwych's lobby bar, "one of the best hotel bars in the world." I read that in some hotel guide, and it's true. High-ceilinged, classy, well-lighted. Jennifer prudently orders a club soda. By now my body thinks it is 4 a.m. I order a Tanqueray and tonic. A couple of drinks later and we head upstairs to shower in preparation for dinner with some Warner Bros. people.

Right after the meal would be a prudent time to go to bed. Matt and Trey have to do the "Big Breakfast," a live, high-energy morning show, at 7, which means leaving the hotel at 6. Plus, no one has slept in 23 hours. But, as I said, our hotel has "one of the best hotel bars in the world." Three hours later we're standing in that same lobby, showered and dressed, feeling shaky.

George, our driver, is wide awake. Everyone at the "Big Breakfast" is equally zesty. Standing off in a corner, I look out the window. It is still dark out. I check my watch. 7:13. Seems like it should be lighter. I wonder if the windows are tinted for the cameras. I crack the door. Nope, no tint, just another dark and gloomy London morning. Oh well, we've been doing our best work at night anyway.

Our friend Stevan arranges for dinner at Nobu, Robert DeNiro's restaurant in the Metropolitan Hotel. I am feeling ill and consider leaving before the evening starts. Matt offers some advice:

"Stay on the train. You only get hurt getting on and getting off."

The ambience is pleasant and the food good, but it is served sporadically, a small portion at a time. Matt, who must eat often and in large quantities, is irritated. However, Trey has devised a clever way to pass the time. Sitting behind us are a woman with gigantic breasts, whom Trey dubs Boobtor, and her date, a rather diminutive guy with a large beak, who is termed Nosetron. Thus our entire table engages in commentary on their mock battle for dating supremacy:

"Be careful Nosetron, you must not underestimate the powers of Boobtor!"

While Trey and Matt's super-celebrity powers don't get us served any faster, they do afford the guys a brief meeting with Al Pacino and Oliver Stone, who have taken a table in some sort of secret back room of the restaurant. They are in London to promote the release of "Any Given Sunday." I see Stone from a distance and believe all the rumors. Matt and Trey return a little dazed and confused.

(I had an opportunity to meet Pacino. I just didn't care. Something is wrong with me.)

Of course, a visit to a foreign city wouldn't be complete without a trip to a strip club, so Trey and I cap off the evening at a dive called Sophisticats. It is truly horrible, not least of all because in London the dancers are required by law to stay three feet from you. Las Vegas never seemed so far away.

Two and a half hours later, it's morning. I'm showered, dressed and walking up the street toward the BBC. Jennifer and I sip bad coffee as Trey and Matt tear through some radio interviews. Everyone is hurting.

On Friday, Jennifer and Matt take the Chunnel train to Paris. Trey and I stay on for a couple of days to hook up with Trey's friend Nick Rhodes, the keyboard player for Duran Duran.

On Saturday, Nick calls, fresh in from Milan. He's made reservations at the Ivy. Because I am nervous about meeting Nick, I suggest to Trey a drink for courage. If he is nervous, he doesn't let it show.

Stevan joins us just as we're being seated. Nick orders the first of several bottles of Saint Emilion, and it successfully unties the knot in my stomach. By the end of dinner I am able to initiate normal, human conversation with Nick and not feel like an idiot.

(Thank God I am a little giddy around Nick. Otherwise, I would have flown home right then.)

The rest of that night is kind of a blur. We're at some club called Noble Rot. Then a girl Trey knows shows up, lifts her shirt and orders a round of Absinthe. After that it's only fragments. Nick's devilish grin as he says, "Absinthe makes the heart grow fonder!" Stevan handling a snooty waitress with his typical aplomb. Me arguing with Nick and Stevan that Cezanne is the greatest painter of all while simultaneously threatening to kill anyone who comes close to our table.

I brush off what little French I have in the arsenal to thank the driver and tumble into the Hotel George V -- the Four Seasons Paris.

Turns out we've come all this way just to be condescended to by the French. (In case you were wondering, it costs about 4000 francs a day to be stared at because you don't tuck in your shirt.) Even a view of the Eiffel Tower framed in my window doesn't erase the fact we're required to wear a suit jacket at every meal except breakfast. So that's the only meal we eat in the hotel, and we all order Breakfast Americain because fuck 'em.

At One Aldwych, where they know a thing or two about subtlety, they gave me two fresh pieces of different fruit every day for the five days I was there. At the Hotel George V, they gave me one plate of fruit, which they let decay throughout my visit. I think that says it all.

(I guess I should be grateful to Paris for tearing everything down for me, because I learned, or was reminded, that life is in the details. In making these comparisons between London and France,
between one hotel and the other, I realized that I am not necessarily snobby -- although I have my moments -- but I am becoming more and more appreciative of smaller and smaller things. It's a good bet that when I go back to London and/or Paris, I'll be paying for it myself and so flying coach and staying at the Holiday Inn. But I'd rather stay at the Holiday Inn with cool people who are fun to be around than stay at The Palace of Condescension in Paris for free. I'd rather hang out with people like Stevan and Nick, two gentlemen, than with any of the fake hangers-on I met. I'd much rather hang with Matt and Trey when they are farting on Jennifer in the car than when they are -- and by extension, I am -- getting the VIP treatment at some club. Because life is really about being with friends and farting on people.)

We're off to New York, as Trey and Matt are getting photographed by Annie Liebovitz. Since there is a schedule, we have to hurry. That means the Concorde. It is in fact quite a small plane. It seats 100, but the accommodations, space-wise, are coachlike.

Now, I am not complaining. I simply want you to know what your money is going to get you. Rumor has it the Concorde is going under, because even at $4,500 each way, it isn't covering fuel costs. And that makes sense. Mach 2 puts you in New York from Paris in three hours. That's a lot of gas.