A great big novel, jampacked with characters, that brings poetry to the dust and the lust of the racetrack. 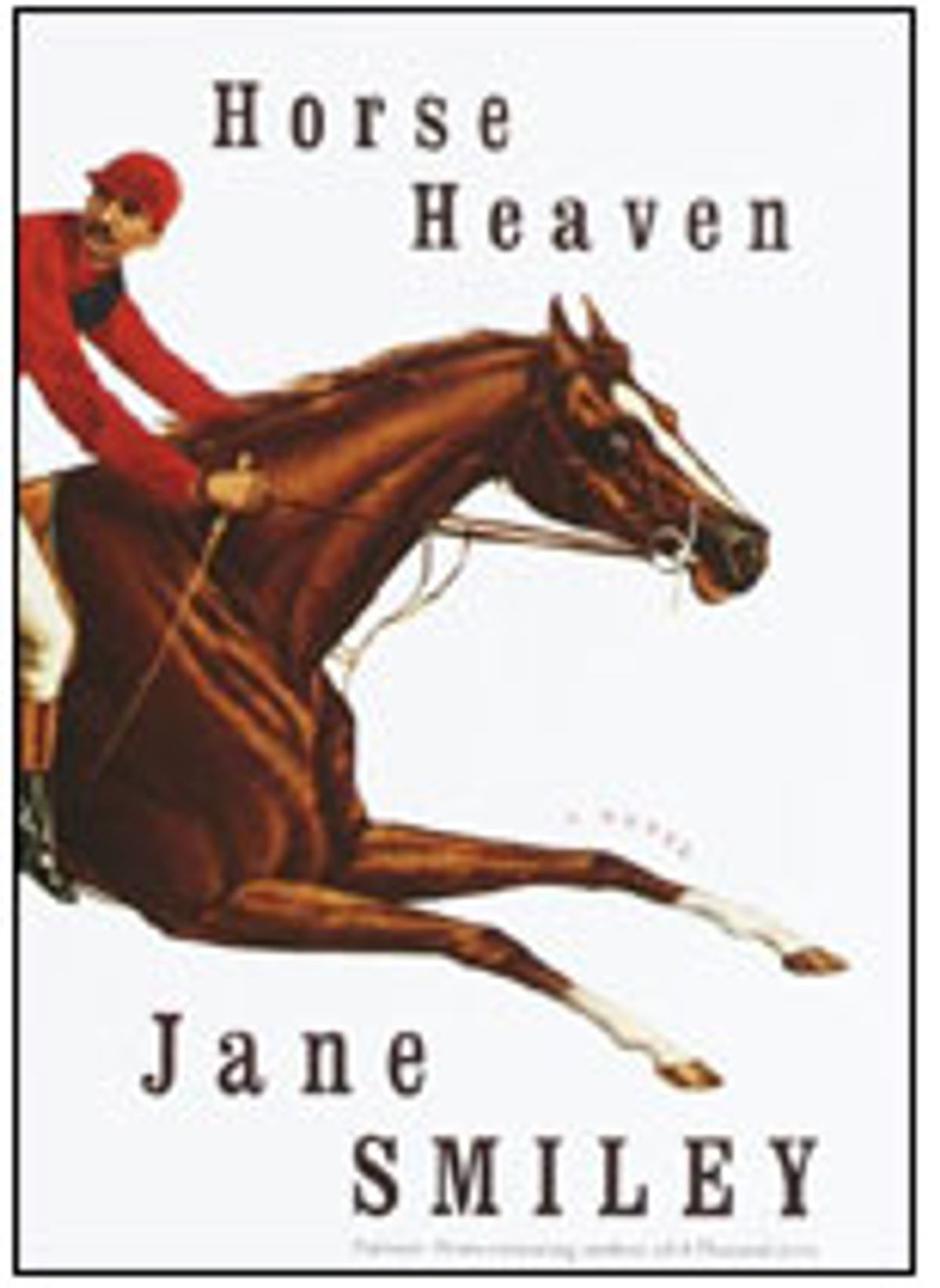 Horses are whores, works of art, incubators, bargaining chips, slaves, money pits, athletes, status symbols, workers, toys, pets, beauty queens, food, machines. Jane Smiley, whose considerable range has thus far stretched from Shakespearean tragedy to campus satire, has produced a remarkable literary achievement: a resolutely unsentimental horse novel. With "Horse Heaven," she makes us care about horses the way E.B. White made us care about pigs in "Charlotte's Web," and makes us understand them the way Walter Tevis made us understand chess in "The Queen's Gambit." And as with everything Smiley writes, she rides this uneven turf with the calm of a jockey who knows she won't be thrown.

One of her characters sums it up: "A day at the races is thousands of stories." Smiley sets the novel at and around the track, jumping from New York to Florida to Maryland to Chicago to New Orleans to Southern California to Texas to France. Along the way, she stages numerous races, from casual contests to the Belmont Stakes, and dips in and out of the lives of her human characters, which sometimes intersect, and the lives of her horses, too, most prominently Froney's Sis (a self-esteem-challenged orphan), Residual (thoughtful), Epic Steam (a pain in the ass) and a promising bay colt later named Limitless.

There are so many characters that you're bound to end up identifying with somebody. Will it be Farley Jones, the middle-aged Zen trainer and enlightened man? Or Elizabeth Zada, the "animal communicator" who has enviable (and profitable) powers of intuition? Or Rosalind Maybrick, the unhappy wife of a difficult owner? Or Eileen, Rosalind's peevish Jack Russell terrier, who occasionally gets an internal narrative of her own from about a foot off the ground? (Everything smells, literally and figuratively.) Or Krista Magnelli, the struggling breeder and beleaguered young mother? Or Roberto Acevedo, the young rider from a dynasty of jockeys, whose thrill in his first real race we get to experience directly? Or -- my own pick -- will you put your sympathetic dollar on Justa Bob, the biggest sweetheart of them all and a genuine romantic hero? He's a horse, too.

At every turn, there's plenty of that "old, old story," as Groucho Marx says in "A Day at the Races" -- "Boy meets girl. Romeo and Juliet. Minneapolis and St. Paul." We witness the love of a trainer for his boss's wife, of a billionaire for the tantrically adept psychic, of a trainer for a broken-down stallion, of a corrupt owner for money, fame and (sporadically) Jesus. There's also a full complement of track villainy; among the lowest of the lowlifes is scurrilous vet Curtis Doheny, who without blinking will do anything to a horse to keep it bringing in the cash.

Throughout, Smiley's pellucid style brings poetry to the dust and greed of the track while establishing firm analogies between the mania of the racing world and the runaway reveries of her human protagonists. Her plot turns can be startlingly efficient, and tragic or wonderful events can take place over the course of a single sentence: "Here was where Rosalind fell in love." All of the scenes involving Sam, a hardworking and kind veterinarian, are riveting, reminiscent of the supple, homely tone of "A Thousand Acres." And Smiley's pacing is impeccable. The Breeders' Cup sequence especially -- a montage involving most of the principal characters -- demonstrates her gift for sustained buildup, for the juxtaposition of small and large events.

Even in her seemingly offhand descriptions, Smiley achieves a similar effect with carefully distilled metaphor: Epic Steam "was big and shining and all but black and, well, mysterious. He looked like a Cadillac with a Mafia don inside." While horses are easy screens for the projection of human fantasies, Smiley spares us the cutesy anthropomorphizing that would obscure their essential natures. And though the novel isn't a rollicking satire like "Moo," there's a considerable amount of sly humor here. Eileen, the terrier, gets a lot of good lines, but so do many others. A typical dig: The wife of a wealthy horse agent "went to a lot of parties. Although she was a princess, she never minded talking to anyone with scads and scads of discretionary income."

The novel does have surprising gaps. For one thing, there are swaths of the horse-racing world that Smiley only glances at. I wanted to see more of the grooms (mainly immigrants whom we glimpse but don't meet), jockeys (after his debut race young Roberto disappears for almost the entire length of the novel), stableboys and -girls. (We look in on a likable girl who has lost her father, but what do horses do for her in particular?) A few characters are too broadly typed, especially an Italian-Irish horse masseur named Luciano, whose rhapsodies about the healing power of gnocchi and wine become increasingly silly. More unsettling is the character of Tiffany Morse, a black ex-Wal-Mart checker who glides from obscurity and boredom to the dazzle of high-end racing without a hitch. Why don't we get her inner monologue? Finally, Smiley's attempt to root the novel in a specific political climate -- the Clinton impeachment circus -- seems an unnecessary distraction.

These are cavils, though. Horses' truths are our truths; as Deirdre says, "They have great hearts. But it's their downfall, that they don't feel the cost until they've paid it." Jane Smiley allows us to feel the cost as it's being paid, and that's what makes this novel a reader's heaven.