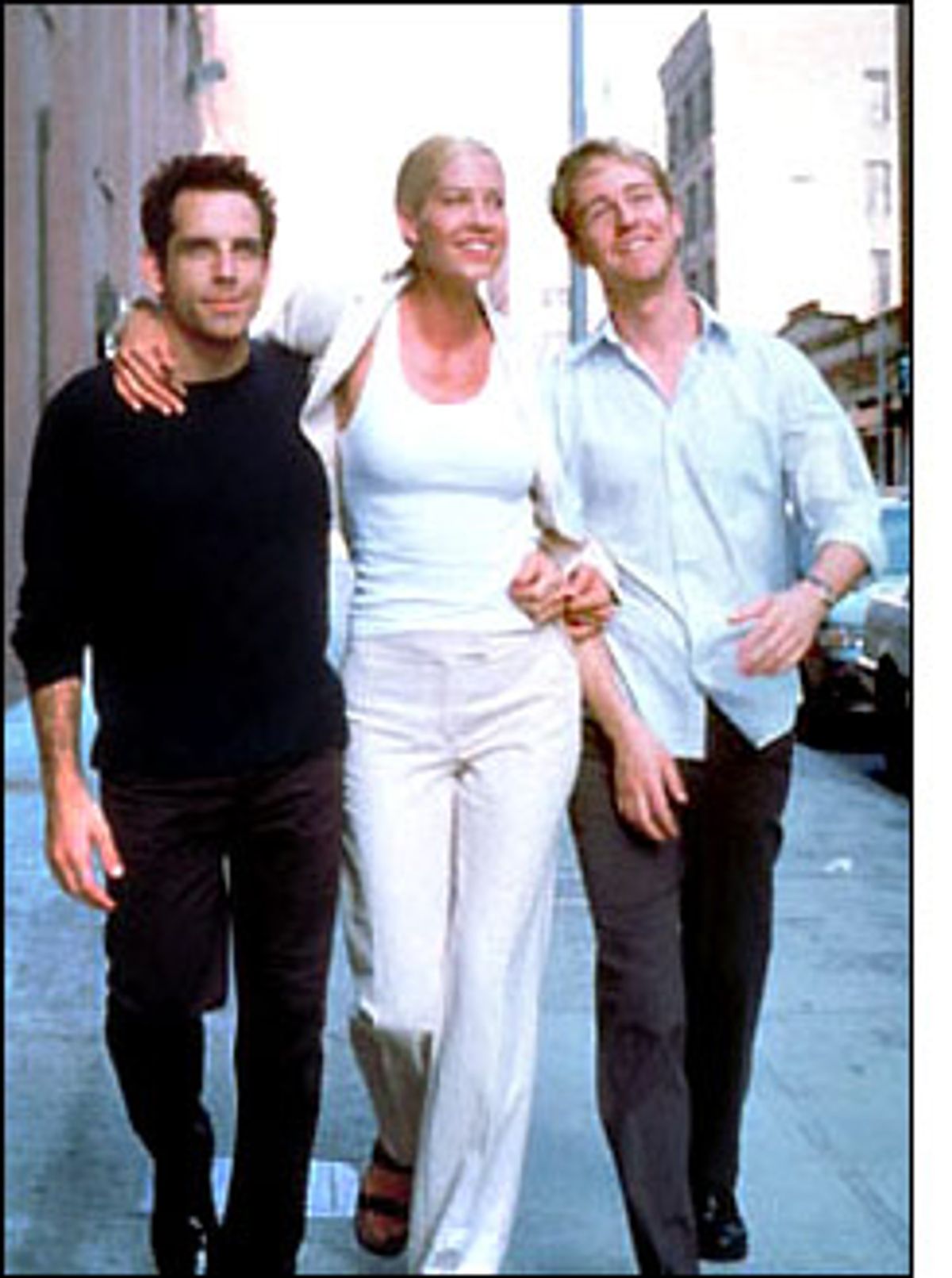 Welcome back, brothers and sisters, to this week's services at the Church of Movies That Suck. Let those other religions have Saturday and Sunday; in our church we honor Friday, the day that brings us renewed hope each week, the day alive with the trembling possibility, so rarely fulfilled, of a movie that does not suck. Our sermon this week is entitled "Smart Actors, Foolish Choices," and for our more traditional congregants in the back, who are already rolling their eyes over my foray into New Age squishiness, let's get specific. How in the name of George Kennedy's career did Edward Norton and Ben Stiller, two of the best and most individual of contemporary movie actors, get roped into this pallid, witless comedy of interfaith romance, which would have seemed embarrassingly weak as a Borscht Belt resort skit in 1959?

My children, it gets worse. "Keeping the Faith" is also Norton's directorial debut, and he shows absolutely no aptitude for the medium. At least two members of the cast (Stiller and Milos Forman, who has a small role as a Czech priest) would have done far better, and hardly anyone could have done worse. The whole movie is shot with that bright, bland, pleasant lighting used in 1970s Wonderful World of Disney TV dramas, and there are several minor technical flubs. Furthermore, with no one around to direct him, Norton seems terribly ill at ease in his undercooked role as Father Brian Finn, a love-struck Catholic priest jealous of his rabbi best friend. (You heard that right, folks.) Trapped in the jittery, nervous, fourth-rate Neil Simon shtick of Stuart Blumberg's screenplay, Father Brian and Rabbi Jake Schram (Stiller) barely seem to know each other, let alone like each other.

Brian and Jake grew up together in Manhattan, Jake collecting Heroes of the Torah playing cards and Brian instructing him in the "spectacles, testicles, wallet, watch" mnemonic for the Sign of the Cross. (I can already tell, people, that my version makes the movie seem funnier than it is.) Their third musketeer was Anna Reilly, a tomboy whom Brian recalls as "a cross between Johnny Quest and Tatum O'Neal in 'Foxes.'" (OK, that actually is sort of funny.) But Anna moved to California, only to return years later, when both guys have become wiseacre clergymen who are reinvigorating their respective faiths in some totally unspecified way. All we know is that they're planning an interfaith senior center that Brian describes as "'Fiddler on the Roof' meets 'Lord of the Dance' meets 'Buena Vista Social Club.'" (Uncle, already! Uncle!)

As you will have guessed, brethren, the grown-up Anna (Jenna Elfman) is a big old babelicious problem. Jake, who comes off more like an unctuous Atlantic City comic than a rabbi, slobbers over her. He's supposed to get married, since synagogue boards don't trust bachelor rabbis, but certainly not to a shiksa like Anna. Brian, who comes off more like the Key Club president than a full-blown priest, also slobbers over her. But it's clear that he's not one of those priests, the ones who cash in on the collar to get laid. Within a few scenes, Anna jeopardizes Jake's career and Brian's vows of chastity, and compels both of these alleged pals to lie, booze it up, brawl and generally betray each other's trust. Then they all say they're sorry and the movie sneaks out through the only plot loophole it can find.

So peculiar is this movie, oh people of the multiplex, that Elfman's mannered and superficial performance as corporate power vixen Anna, stuck between her two daffy clerics, is pretty much the best thing in it. Her cat-eyed cutie-pie thing either slays you or gets your goat, but at least she has an idea about what she's doing and sticks with it. Everybody else in this talented cast seems to have read the script in the morning and shot his scenes in the afternoon, pretty much relying on generic acting chops for survival. Director Mike Figgis is generating a lot of buzz with "Time Code," a film shot live in real time that comes out later this spring, but Norton has gone him one better. "Keeping the Faith" is so agonizingly slow, so full of endless, pointless scenes in which the viewer can do nothing except contemplate the yawning abyss of his own soul, that I swear to you it was shot in less time than it takes to watch it, and then stretched to feature length by diabolical means.

Brethren, I know what some of you are thinking. I too have heard that little voice telling me I must not be unappreciative of these nice people who work so hard to entertain me. As I left the theater after "Keeping the Faith" finally ended, muttering imprecations under my breath, fate put me behind a nice-looking couple who were congratulating each other as they put on their coats. They had laughed until they cried; they looked back longingly at the screen and pronounced the film delightful. Yes, children, we all have weak moments when we want to like Movies That Suck, especially when the people in them seem clean and charming, no one curses or dies and the stories they tell studiously avoid offending anyone. Do I need to tell you whose voice it is that tells us to like such movies? Of course I don't; it is the devil's voice. Do I need to tell you what lies down that road? Of course I don't; down that road lies "Patch Adams."

For me, it's precisely the mushy, unspecific quality of Blumberg's screenplay, and its determined effort not to hurt anybody's feelings, that is most offensive of all. Sure, interfaith romance involving Christians and Jews is still a hot-button topic for some viewers, but please! The '70s sitcom "Bridget Loves Bernie" was way edgier and more honest than this relentlessly polite yet irritatingly soulless film. OK, I'll admit that my personal history may be coloring my reaction just a little; have I told you the story of my third-grade girlfriend, Abby Greenfield, and why her parents took her to Israel? Some other time.

"Keeping the Faith" can muster only a vague and stereotypical impression of what a rabbi's life is like (he is pursued by women) and even less sense of a priest's (he eats in a wood-paneled dining room). The two religions are treated with a benign stupidity that is supposed to signal respect, as if they were adjacent departments in the spirituality mall that sold slightly different brands of the same product and made no serious demands on their adherents. Sure, there are rules: Jake can't marry outside his faith and Brian can't marry at all. But these are just zany complications, in line with the movie's other stale gags: Jewish mothers are pushy, greedy prima donnas. The Irish drink. Jewish daughters are pushy, horny prima donnas. The Irish, um, drink. If the shtick is applied a little thicker to Jews than to Catholics, that's only because Blumberg seems to know nothing whatsoever about Catholic faith and mores.

If either Jake or Brian is actually supposed to have religious faith that sustains them through thick and thin -- the kind of faith that we here in our church have in such abundance, sisters and brothers -- there's no evidence of it. You don't make a movie called "Titanic" without a big-ass ship, and you'd better not make a movie about clergymen without giving us some God. But then, "Keeping the Faith" has no faith in honest storytelling or believable characterization either, and provides absolutely no evidence that golden boy Norton (whose acting in "American History X" and "Fight Club" I've admired greatly) is ready for the director's chair.

Join me in a brief prayer for Catherine Lloyd Burns (as Anna's dippy assistant) and Ken Leung (as a karaoke salesman); their agreeable comic bits are wasted here and they must await their reward in the next movie or the next life. As for Forman, Eli Wallach, Anne Bancroft, Holland Taylor (randy Judge Roberta Kittleson from "The Practice") and the rest of this cast, well, we are all sinners. We must work to forgive and forget. Let the healing begin. In the name of Alan Hale and Hayley Mills and Bronson Pinchot, go in peace. Coffee and Bundt cake in the usual place.