"Dreambirds: The Strange History of the Ostrich in Fashion, Food, and Fortune" by Rob Nixon 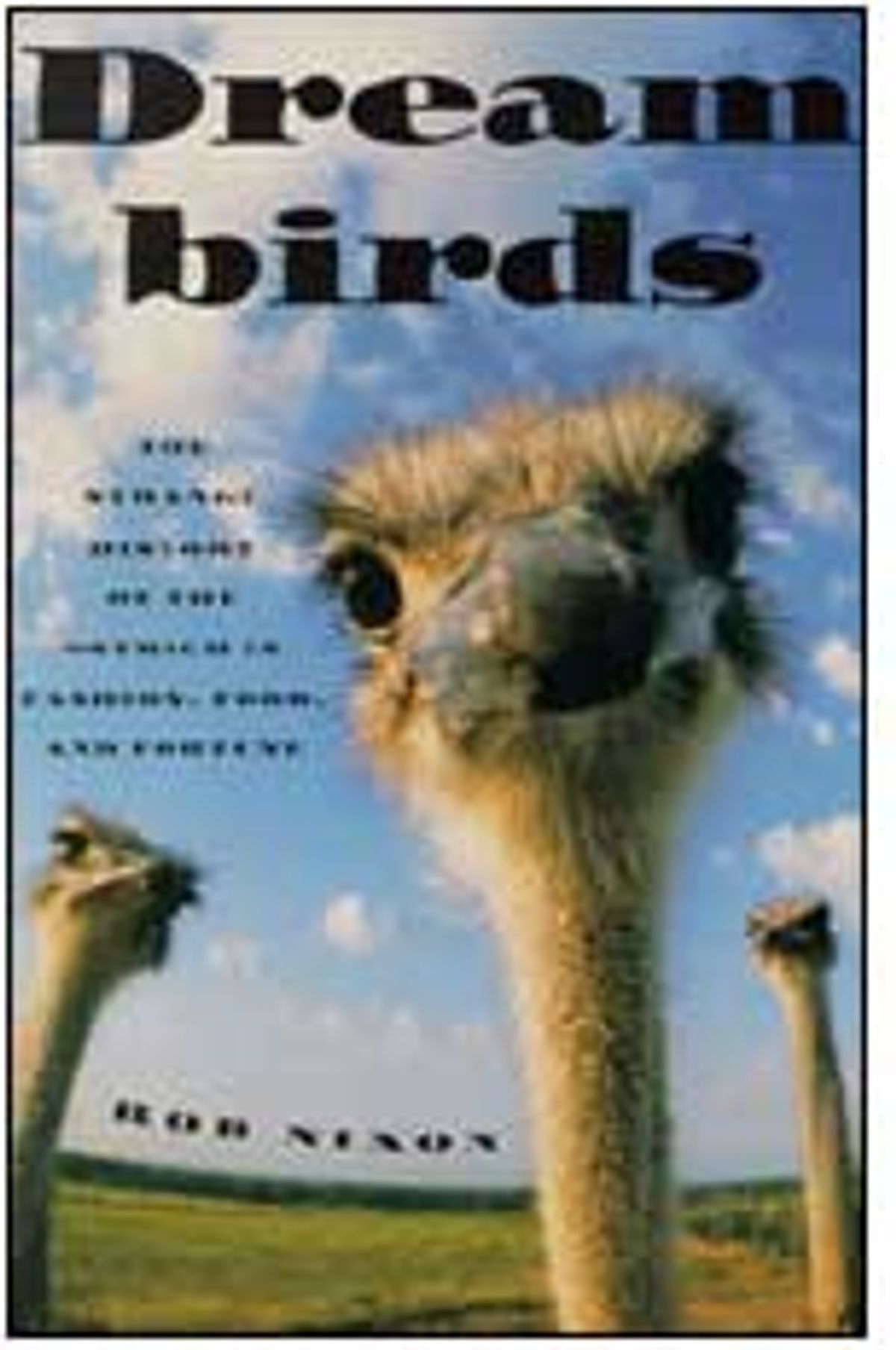 Late in Rob Nixon's "Dreambirds," a beautifully written if rambling book that's somewhere between the history it professes to be and a memoir of dislocation and homecoming, the author sneaks in what he says is the Arab fable of the ostrich's origins. When Allah summoned all of his creatures to be named and categorized, the ostrich decided that it was not a bird, since it could not fly, yet also not a beast, since it had two legs rather than four. Allah noticed the ostrich's aloofness and decreed: "You have cut yourself off from all your fellow creatures. You have chosen to be different and to be alone. So you shall live as you have chosen."

There is another creature, of course, that walks on two legs, cannot fly and counts itself separate from the birds and the beasts. "Dreambirds" concerns people more than it does ostriches, and mostly it concerns Nixon himself; it's a personal memoir clad in exotic plumage. For Nixon, a native of South Africa who has lived in the United States for 20 years and now teaches literature at the University of Wisconsin, the ostrich is a shifting signifier, a symbolic presence that travels through the background of his story without ever coming clearly into focus. In the fable of the ostrich, he seems to see something of his own rootless, peripatetic nature. He departed South Africa in sudden and clandestine fashion at the nadir of the apartheid era, cutting himself off from his family and the haunting desert landscapes he had cherished as a child. He can return only obliquely, by retracing the route of an awkward, flightless bird that, like him, had wandered from Africa to the New World.

And so there is a great deal of material on the history of ostrich farming in "Dreambirds." We learn about Max Rose, the Lithuanian Jewish immigrant who made and lost an enormous ostrich fortune in Oudtshoorn, the city in South Africa's Karroo desert that became the center of the world's feather trade in the years before World War I. At about the same time, 10,000 miles away in Arizona, a transplanted Canadian, Alexander J. Chandler, added ostrich ranching to his dreams of building canals and enormous resorts in the desert. (The ostriches eventually faded away, while Chandler's other, almost accidental innovation, the desert golf course, would shape Arizona's future.) We travel along with the great white explorers of the 1911 Trans-Saharan Ostrich Expedition, a quest to find the nearly mythical Barbary ostrich with its superior "double floss" feathers.

In the ostrich, with its teaspoon-size brain, its ornery nature (it has been known to kick would-be ostrich wranglers to death) and its implausible plumage, Nixon evidently sees the fragility, and the ludicrous beauty, of human dreams. It's also clear that he feels a personal connection to the peculiar bird Carolus Linnaeus dubbed the "sparrow-camel" (Struthio camelus). Why shouldn't he? He has vivid memories of riding ostriches during childhood visits to the Karroo -- including the visit during which an ostrich ate his watch, a family heirloom -- and his first published writing came, at 15, in a South African ornithological journal called, yes, the Ostrich. But the link between the actual world of ostriches and ostrich farming, full of fascinating minutiae as it may be, and Nixon's touching reminiscences of his taciturn journalist-botanist father remains inscrutable to me.

Ultimately, perhaps "Dreambirds" is not a book about either people or ostriches but a book about writing. It is not ostriches themselves but Nixon's desire to write about them that brings him to Arizona during an all-too-brief early-'90s ostrich boom. The Southwestern desert rekindles his childhood memories of the Karroo, opening the Proustian floodgates and allowing him to write about his father and the rest of his closemouthed family of Scottish immigrants. He's marvelous on his subsequent return to South Africa, just before its first democratic election in 1994. Exiles like him have "all struggled in our own way with memory," he reflects, "some forgetting this place too fast, others not nearly fast enough." His first visit to the Karroo in 25 years is charged with both familiarity and unreality: "What I saw I recognized, but it had been so long I couldn't quite make the memory mine. The whole trip felt suspended, as if occurring in a tense grammarians hadn't yet described."

"Things with roots have always bothered me," Nixon admits, and for better or worse "Dreambirds" celebrates rootlessness and disconnection. When he describes an Arizona desert museum as "just things from here and there, coexisting in the deep present," he could be describing his own book. His heroes are improbable wanderers and dreamers, Yiddish speakers in the veld, an eccentric hotel tycoon with a basement full of feathers, an Algerian-born woman he meets in Oudtshoorn who is a Paris-trained plumassihre and the great-great-granddaughter of the first ostrich farmer in history. Like Nixon himself, and like Allah's ostrich, they are creatures who have chosen to be different and alone, and to live as they have chosen.