Ooooh! That's gotta hurt! Shawna Kenney cracks the whip and gets paid for the pain of writing a memoir. 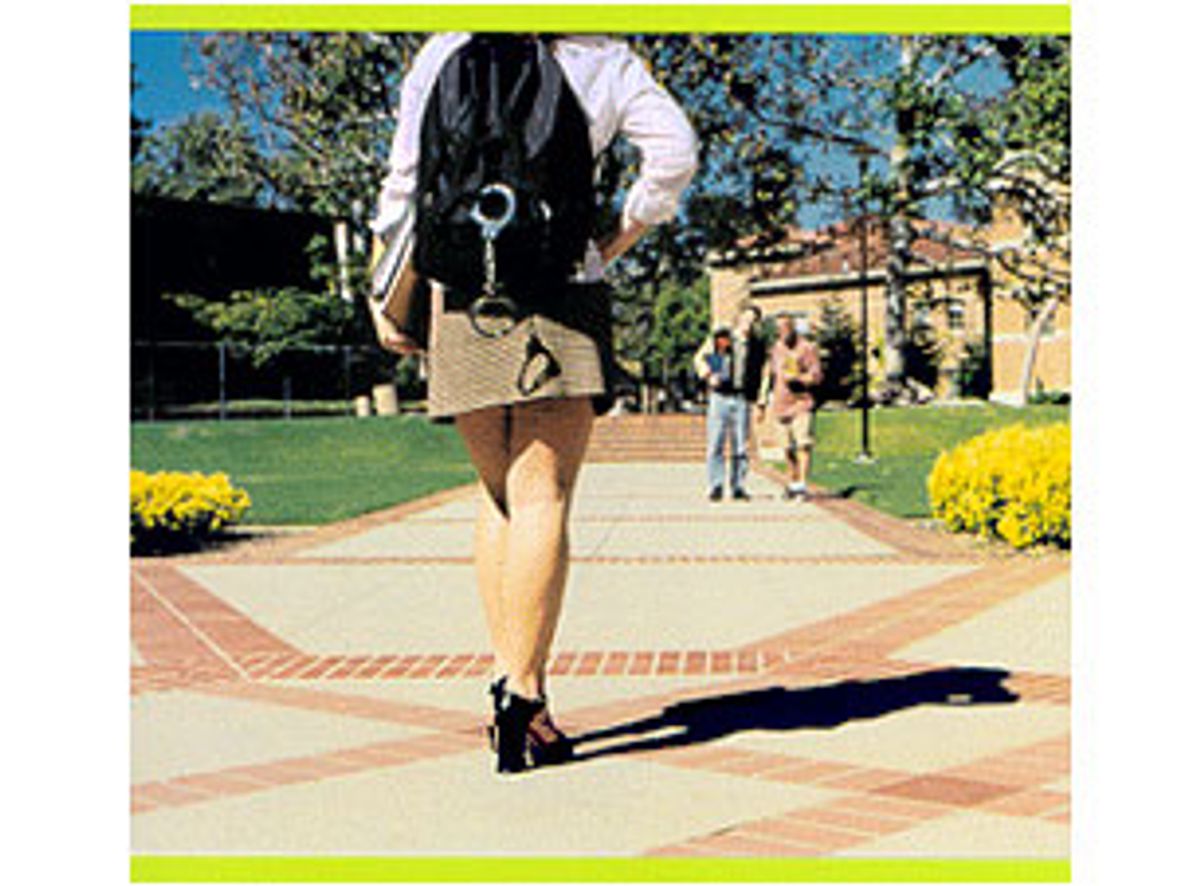 It's close to 1 a.m. on a Thursday night, and the girl onstage at Jumbo's Clown Room -- Hollywood's most notorious strip club -- unwinds a long, brown leather bullwhip, snapping it with deadly accuracy to the tune of "California \ber Alles" by the Dead Kennedys.

Granted, she's not the most attractive one on the bill tonight, but she's entertaining. And she's sort of cute in those gold hot pants and bikini top. I just hope she doesn't hit us with that frickin' whip.

"She's pretty good," agrees Shawna Kenney, sipping a virgin cocktail. "She could kill a man with that thing if she wanted to."

"There were all kinds -- doctors, Washington policy wonks and elected officials," says Kenney of her clientele. "I had at least one congressman -- very old and wealthy. A Republican, of course."

Hmm. Who could that have been? Henry Hyde? Newt Gingrich? Dick Armey? Kenney won't say, and in any case, it's not really that kind of book. Kenney's tome is more Holden Caulfield in leather than "Venus in Furs."

Though there are plenty of naughty bits, the memoir doesn't dwell on them. Instead, the reader follows a 19-year-old punk-rock refugee from the Maryland sticks to the big city, where she labors at a series of dead-end day jobs before spotting an ad in D.C.'s City Paper that reads: "Get Paid for Being a Bitch." After discovering that being a bitch can pay about $300 a night on average (and often more), Kenney does the math and says goodbye to the fast-food industry and hello to her new life as "Mistress Alexis."

"The spanking was my favorite part," Kenney confesses, laughing. "I think it's fun and funny. And anyway, most men deserve it."

But it wasn't all bondage and nipple clamps; there were plenty of gross-out moments, which Kenney describes in the book with the wide-eyed wonder of a Gen X Judy Blume. "My new profession colored the world around me," she writes in one passage. "I stared hard at every male passerby -- was he a submissive? A foot fetishist? A toilet boy? The world was Silly Putty. Everything I thought I'd known was stretched out of perspective and replaced by my new 'inside' view. I was privy to a kaleidoscope of desires and differences that I made no judgment on -- just enjoyed watching and observing."

Of course, there's nothing new under the sun. The dom game has become so mainstream in America's large urban centers that it hardly raises an eyebrow anymore. Even Kenney admits that "out here" in La-La Land, where she and her boyfriend moved after she bailed from the world of D.C. B&D, every other person you meet is into whips and chains.

What keeps Kenney's coming-of-age, slap-and-tell memoir from being hackneyed? Well, writing ability for one. Kenney's an amusing read, even when she's describing relatively prosaic scenes from her childhood in the Maryland boonies.

But she also offers the perspective of her generation -- one reared on "Repo Man," Ronald Reagan and SCTV. When she makes a passing reference to "Fat Albert and the Cosby Kids" or quotes Henry Rollins' "Hallucinations of Grandeur," her peers are with her all the way.

"I thought the book was awesome," Jose Travez, 24, a writer for Al Goldstein's Screw magazine, told me. "I really liked the first-person account of that world through the eyes of a hardcore punk girl. Her likes were my likes. I was able to relate to her."

But the real excitement started a couple of weeks ago when Matt Moneypenny, an agent at the powerhouse Hollywood firm ICM, called Kenney up out of the blue and offered to buy her lunch. Seems someone gave Moneypenny Kenney's book as a gift, and he just had to sign her. Thus, the wet dream of every wannabe screenwriter in this town was handed to Kenney on a silver platter. Eat your hearts out, boys!

"They think it'll make a great movie," says Kenney. "I had heard about ICM, but I wasn't trying to get an agent really. They brought me a contract at lunch, and I signed on."

Currently the book's sold about half of its initial run of 5,000 -- not exactly John Grisham, but pretty good for an unknown author being published by a company almost no one's heard of before. Prior to putting out Kenney's book, Retro-Systems was primarily known as the home of the now defunct Whap! magazine, a National Lampoon-style fetish rag that billed itself as "The Modern Gal's Guide to Marital Bliss."

Kenney was a contributing editor there for several months until her bosses, intrigued with her salacious war stories, proposed that she pen an account of her dom days. Kenney did just that, and now she's got hotshot wheeler-dealers talking about feature films and maybe even a TV series.

Who'd play Kenney? It's too soon for that. My suggestions: Reese Witherspoon, Sarah Michelle Gellar or Christina Ricci.

"I'm waiting to hear something," Kenney remarks hopefully. "California's been really good to me so far."

The whip girl's long since left the stage as Jumbo's Clown Room nears closing time. Now there's this completely naked Rubenesque blonde before us, writhing to the tune of Roxy Music's "Love Is the Drug." Jumbo's is so whack. Supposedly Courtney Love stripped here back in the day. And there are rumors that it's a great place to score smack, but, not being a dope fiend, I can't confirm that.

In any case, it's seedy. Kenney had never been there before, so it seemed like the perfect spot to do an interview. But now the smoke from a drag queen's cancer stick is giving Kenney a headache, and she wants to go. She's finished her cranberry juice in any case. You see, the former dom is a health nut and vegetarian. Moreover, she avoids both alcohol and tobacco.

"I've never even tried," she says of cigarettes as we walk out the door. "My whole family smokes and I hate it."

That Adam Ant song comes to mind. So I sing her a lyric: "You don't drink, don't smoke. What do you do?"

She glances over her shoulder and bats her eyes, "You mean, you have to ask?"