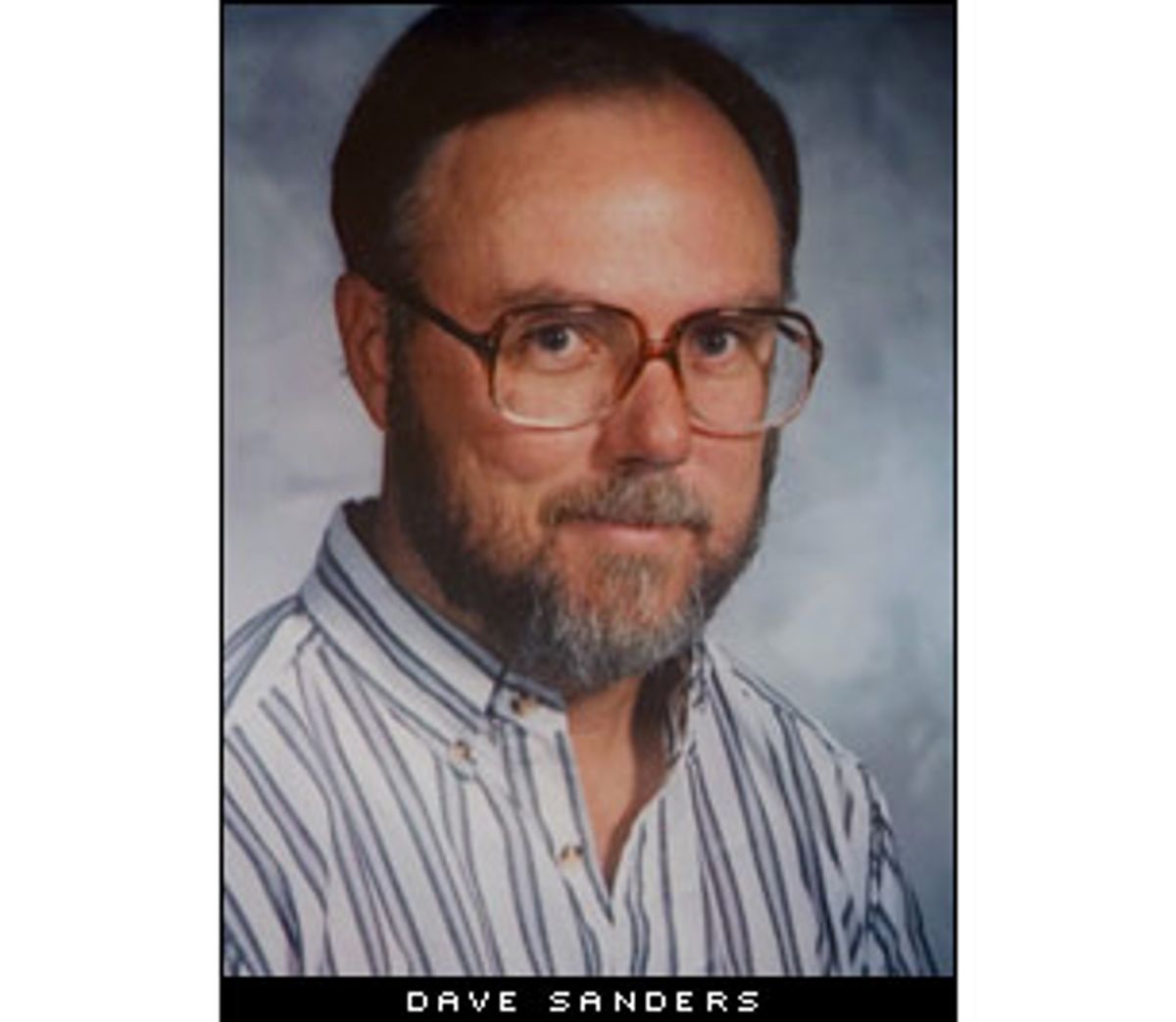 One day after filing a federal lawsuit against the Jefferson County
Sheriff's Department, the lead lawyer representing the family
of slain Columbine High School teacher Dave Sanders charged the
department with a coverup Thursday,
alleging that officials have kept
details of exactly what went on last
April 20 from victims' families and the
public.

"On at least one particular item, I
affirmatively believe they were involved
in a coverup," Peter Grenier said.
"Absolutely, yes. A human being directly
told us that," he said. "A human being
affirmatively demonstrated a coverup."

He said the department has been
extremely uncooperative, forcing the
family to hire private detectives. "Our
case is based on a lot of lengthy,
expensive private investigation," he
said. "No one from the sheriff's office
would tell us anything."

The Sanders lawsuit contained a host of
major new allegations, including claims
that a sharpshooter had Dylan Klebold in
his sights in the library, but his
supervisors wouldn't allow him to act.
It also contends the sharpshooter saw
Klebold and Eric Harris commit suicide,
and thus officers were aware the pair
were dead three hours before Sanders
died, but failed to rescue him.

Because of confidentiality agreements,
Grenier said he was unable to be
specific about the identity of the
sharpshooter, the item covered up or the
witness to it. "It will all come out in
discovery," he said.

Earlier this week a judicial ruling
granted the 15 families who were
preparing lawsuits access to the
sheriff's long-delayed "Final Report,"
but Grenier says the ruling came far too
late to inform his filing. Neither the
Sanders family nor its legal team has
seen the report or the other newly
available material. He expects to
discover additional surprises within
that data. "I hope to God there's
something useful," he said.

Many victims' families have expressed
anger about the long delay in releasing
the final report on the Columbine
investigation. Brian Rohrbough, father
of Daniel Rohrbough, recently lamented
on NBC News that he feared he would have
to sue the sheriff's office to learn how
his son died.

Sam Kamin, a law professor at the
University of Denver, said the various
lawsuits may well achieve their stated
goal of bringing new evidence to the
public. "If this gets far enough that
they do discovery, more information
about this may come to light," he said.

However, the families may be
facing an uphill battle, he said, stressing that he had not read the suits and
was offering a preliminary reaction based
on knowing key points.

The Sanders suit runs over 40 pages,
with explicit, detailed information and
allegations not previously aired.

The suit charges that the sheriff's
office has mischaracterized the attack
for the past year as a "hostage
situation," when "the massacre was not
at any point a 'hostage situation' under
the clear meaning of the term set forth
in Defendants' own manual."

It also alleges that the command team
"knew before noon (although they have
since tried to suggest otherwise) that
there were two suspects, and that their
names were Eric Harris and Dylan
Klebold." The suit explains that the
sheriff's deputy serving as security
guard at the school knew both killers,
and exchanged fire with them outside the
school at the start of the attack.

A sharpshooter witnessed the killers'
suicides, the suit claims, and therefore
"the Command Defendants knew of their
deaths to a virtual certainty by 12:30
p.m. at the latest."

That early knowledge of the killers'
identities and their deaths changed
the nature of the attack, and the
expectations of the law enforcement
response, the suit contends.

While the new allegations about the law
enforcement response to the massacre
have received the most attention, they
are not the heart of the legal case. The
family is claiming that Sanders' civil
rights were violated "by prohibiting or
impeding movement and then not doing
anything to save him," Grenier
explained. The suit hinges on the fact
that the command team forced Sanders to
remain inside Science Room 3, cut off
several avenues of escape, repeatedly
offered assurances that help would
arrive within 15 minutes and then failed
to respond as promised.

"Command Defendants exerted their
control over everyone inside the school
and over the hundreds of police, medical
and rescue personnel massed nearby to
prevent anyone from taking any action
directed at rescuing or saving the life
of Dave Sanders," the suit reads. It
contends the command team prohibited
students and teachers from breaking out
a window and barred SWAT teams from
attempting a surgical entry through the
roof or one of many exterior doors
almost directly beneath him.

"As a result ... Science Room 3 was the
last [their emphasis] area in the
building reached by SWAT teams ... and
Dave Sanders was literally the
last wounded person whom police
or rescue personnel got to, even though
Sanders was the only individual
known to the Command Defendants
throughout the critical several-hour
period to be in urgent need of emergency
lifesaving treatment."

The suit repeats what has long been
common knowledge, that by noon law
enforcement was aware of Sanders'
situation and location via 911 calls and
a large white message board reading "1
BLEEDING TO DEATH" facing toward the
window. The department has contended
that Sanders' wounds were severe enough
that he would not have survived
regardless, but the suit also challenges
this claim.

The lawsuit by the family of Daniel
Rohrbough and four other slain
students also charges law enforcement
teams with inaction on the day
of the killings. "Although numerous
deputies of the Sheriff
Department were in a position to
exchange gunshots with Harris and
Klebold when they exited the school
building, once again Defendants
failed to either stop them outside the
school or pursue the killers
into the school," it says.

The suit paints even Harris and Klebold
as perplexed by the inaction.
"Several minutes after first entering
the library, one of the killers
went to the windows of the library and
shot out several windows," it
reads. "The Defendants made no response.
Even the killers appeared
puzzled and amazed at the Sheriff
Department's non-response to their
rampage."

But the heart of this lawsuit lies in
its laying out a picture of two
contradictory responses: the SWAT teams
remaining outside to "secure
the perimeter" while the 911 operators
instructed students to remain
inside because there was "help on the
way."

"At the time the shooting began in the
library, the students and
teachers inside the library could have
easily escaped to the outside
of the building," the suit contends.
"However, the 911 operator ...
advised [teacher] Patti Nielson that
Sheriff's deputies employed by
Defendant Stone, paramedics and firemen
would soon be arriving in the
library and to stay there and on the
line with her."

But the command team had full intention
of carrying out a very
different plan, the suit contends. After
the killers entered the
building, but before they entered the
library, the command team "made
a deliberate and intentional decision to
limit the response of law
enforcement officers at the school to
'securing the perimeter,'" it
reads.

The result, it says, was the slaughter
of 10 of the 13 victims
murdered April 20.

Kamin stressed that a federal civil
rights lawsuit requires
evidence that law enforcement was not
just ineffective but
made the students worse off than if it
had never shown up on the
scene. The lawsuit addresses that issue
directly: "By way of
comparison, the children in the commons
area (who were not encumbered
by the 911 operator's commands)
scattered to the various exits at the
beginning of the incident and as a
result none of these children were
killed."

As with the Sanders case, this suit
contends that the students' civil
rights were violated because their own
actions were impeded by law
enforcement, who thereby assumed a
special obligation to rescue them.
"By telling the people in the school
library to stay there and await
law enforcement personnel ... [the
Defendants] assumed an
affirmative Constitutional obligation to
protect those persons," it
says. "By such conduct, the persons in
the library were effectively
in the custody of Defendants."

Kamin described one additional hurdle
for this suit. "The
department can't be sued unless it has a
policy or pattern and
practice that violates their civil
rights." That explains the suit's
otherwise surprising conclusion that
both the SWAT teams and 911
operators acted exactly as they were
trained to act.

It concludes by citing that
contradictory training as the crucial
final point in its claim. "As a result,
on April 20, 1999, sheriff's
deputies who chased Harris and Klebold
into Columbine High School and
911 operators who instructed Patti
Nielson and sheriff's dispatchers
were not properly trained to handle the
situation at Columbine High
School."