It doesn't really matter who sleeps with whom in this sub-"Melrose Place" college fantasy, just that both actors will end up shirtless. 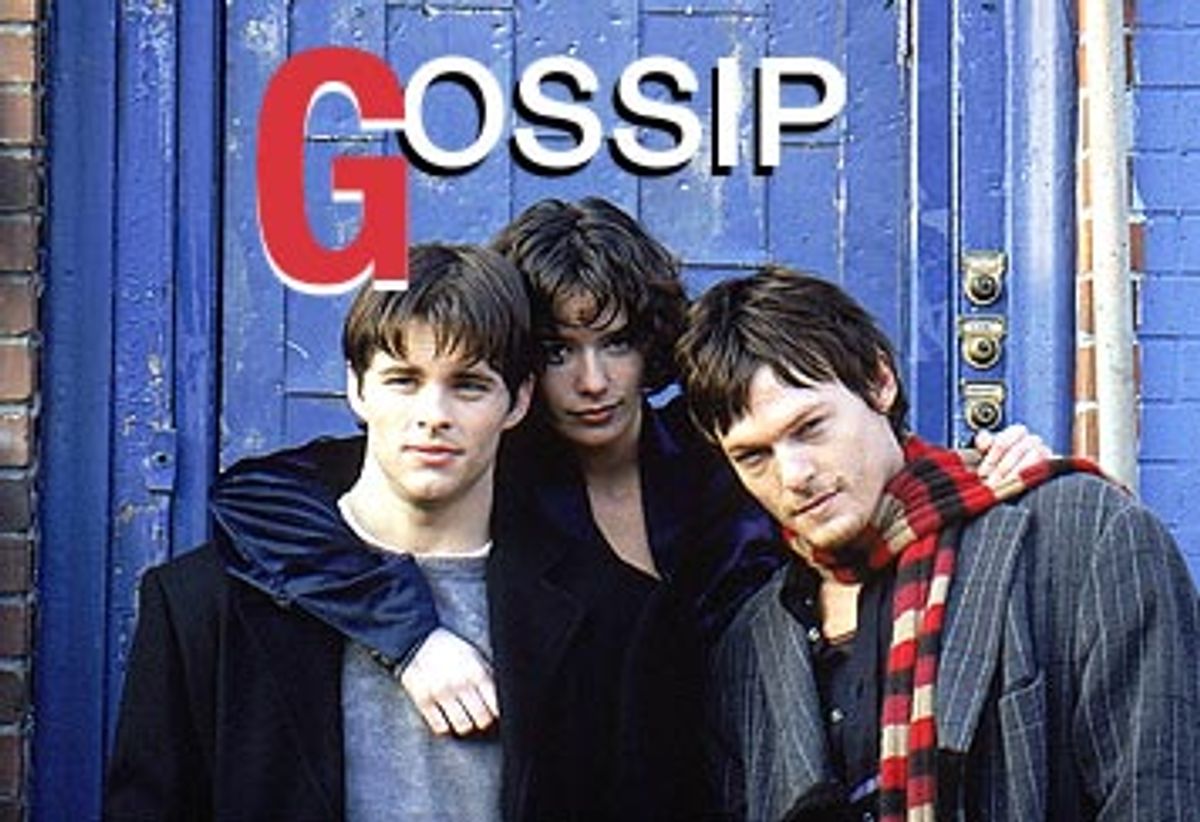 "Gossip" is ludicrous trash, but it has style, along with a nasty little sting in its tail. Its charms, such as they are, are all on the surface -- beautiful faces, beautiful clothes, deluxe interiors and lots of breaking glass -- while its story makes no sense whatsoever. It'd be a perfect movie to watch while sloppy drunk, or while making out with a stranger on a hotel bed, or in between bong hits.

The "Gossip" formula begins with three gorgeous young unknowns and then coasts along on the lustrous photography of Andrzej Bartkowiak (cinematographer here and director of the recent "Romeo Must Die") and a pulsing dance-music soundtrack featuring the likes of Morcheeba, Propellerheads and God Lives Underwater. Its sub-"Melrose Place" fantasy of collegiate life bears the same relationship to the real academic world that Penthouse Forum does to real sex, but that's more or less the point. Ignore its faint attempts to moralize (not a difficult task) and "Gossip" is an acceptable time waster, a baroque melodrama set in an imaginary universe.

Derrick (James Marsden) is a rich-kid college student who's apparently paying the freight for his two best pals to room in his enormous duplex loft. We're in an unnamed city somewhere on the Eastern seaboard; a few clues are dropped to suggest it might be Manhattan. (Like almost every American movie in Hollywood's neo-cheapskate era, "Gossip" was actually filmed in Canada.) If so, I guess Derrick's dad is the supreme potentate of an oil-exporting nation. Nobody in New York -- at least, nobody below about Marla Maples' level -- lives in an apartment like this, and Derrick's inverted-funnel teakettle looks like it cost more than all the furniture in my early-'80s college household put together.

Mind you, Derrick and his friends Travis (Norman Reedus) and Cathy, whom everyone calls Jones (Lena Headey), don't spend too much time either at home or in class. Mostly they don faux-vintage designer clothes -- is Derrick also footing the bill for these smashing swinging-London outfits? -- and hit the party circuit, where they quaff various post-martini concoctions, look terrific and flirt with each other and other people, to little avail. Partly as an academic exercise and partly out of vicious boredom, the trio decide to start a mildly caustic rumor about Naomi (Kate Hudson), a virginal rich girl they dislike. As the rumor spreads and morphs, the improbable plot machineries of "Gossip," featuring many switchbacks and a neatly packaged final surprise, labor into motion.

"Gossip" is the first feature from Davis Guggenheim, who has previously directed episodes of TV dramas such as "ER," "NYPD Blue" and "Party of Five." I can't quite decide whether Guggenheim's approach is canny or moronic -- can it be both at once? -- but in either case "Gossip" is one of those movies that feel like a dij` vu experience on first viewing. Everything in it is a smoothed-out version of something else. It borrows the brash fashion fantasy of "Swingers" and the ironic design-magazine aesthetic of "Fight Club." In fact, the "Fight Club" influence is persistent throughout the movie, from its placeless, timeless quality to its vague flirtation with anti-materialist satire. As exhausting and overwrought as I found "Fight Club" when I first saw it, it's proving to be one of those movies that cast a long shadow in retrospect.

With his big, angular head, thick jock's neck and perennial sneer, Marsden is the poor man's Matt Damon, while Headey's English-rose complexion, shaggy do and thrift-store queen costumes suggest both Helena Bonham Carter (in her "Fight Club" trash-bag mode) and Saffron Burrows. (I submit that when you hire somebody who looks like Burrows, rather than the real thing, you're too damn cheap.) Reedus has more film experience than his two costars, and his portrayal of Travis, a mumbling, tortured artist who builds giant Joseph Beuys-style installations, is certainly idiosyncratic. Perhaps to match his pseudo-'60s Savile Row jackets, Travis is a dead ringer for Brian Jones, the Rolling Stones' original lead guitarist.

In truth, none of the acting by the principals is bad enough to get in the way. Headey and Marsden are clearly in the film as design elements, and Bartkowiak's camera lingers on them in long, honey-dipped closeups, serving as counterpoint to all the converted industrial interiors, flickering video screens and rain-swept city streets. It's not like you give a crap about the characters -- the only reason to be interested in Derrick and Jones' will-they-or-won't-they dance is a desire to see one or both of them shirtless -- but all of this goes down as smoothly as that third cosmopolitan.

Eventually, however, I lost track of whether poor little Naomi was a virgin or a slut and couldn't quite see why anyone, even at the Toronto campus of TV-Land Fake University, would care about such a low-rent rumor in the first place. Gregory Poirier and Theresa Rebeck's dialogue is clean enough, and their screenplay finally finds another gear when the persistent campus scuttlebutt persuades Naomi that she has been raped without her knowledge. Its efforts at plausibility and social relevance, however, are pretty hopeless. Like most thrillers, "Gossip" gets its most effective traction from the stock-paranoid idea that you've been fooled by those closest to you, and Jones slowly (way too slowly) begins to question who the seductive Derrick really is and whether his pattern of insouciant falsehood is more malicious than charming.

I guess Eric Bogosian thought he could sneak a fat paycheck here, as a sanctimonious professor who delivers homilies about the difference between gossip and news, without the hipster fans of his solo-performance incarnation noticing. Joshua Jackson shows up in a brief, low-wattage role as Naomi's accused rapist; maybe Jackson caught a cab across Toronto from the set of "The Skulls" (another campus thriller, and one that makes "Gossip" look like the second coming of "Vertigo"). All I can say about the spectacle of worthy actors like Sharon Lawrence and Edward James Olmos playing tiny roles in this guilty-pleasure tripe sausage is: Yikes. Maybe one of them got to keep Derrick's teakettle.