Sleeping with the enemy

While I'm planning security for the IMF demonstrations, my husband is getting thrown in jail. He better not ask me for bail. 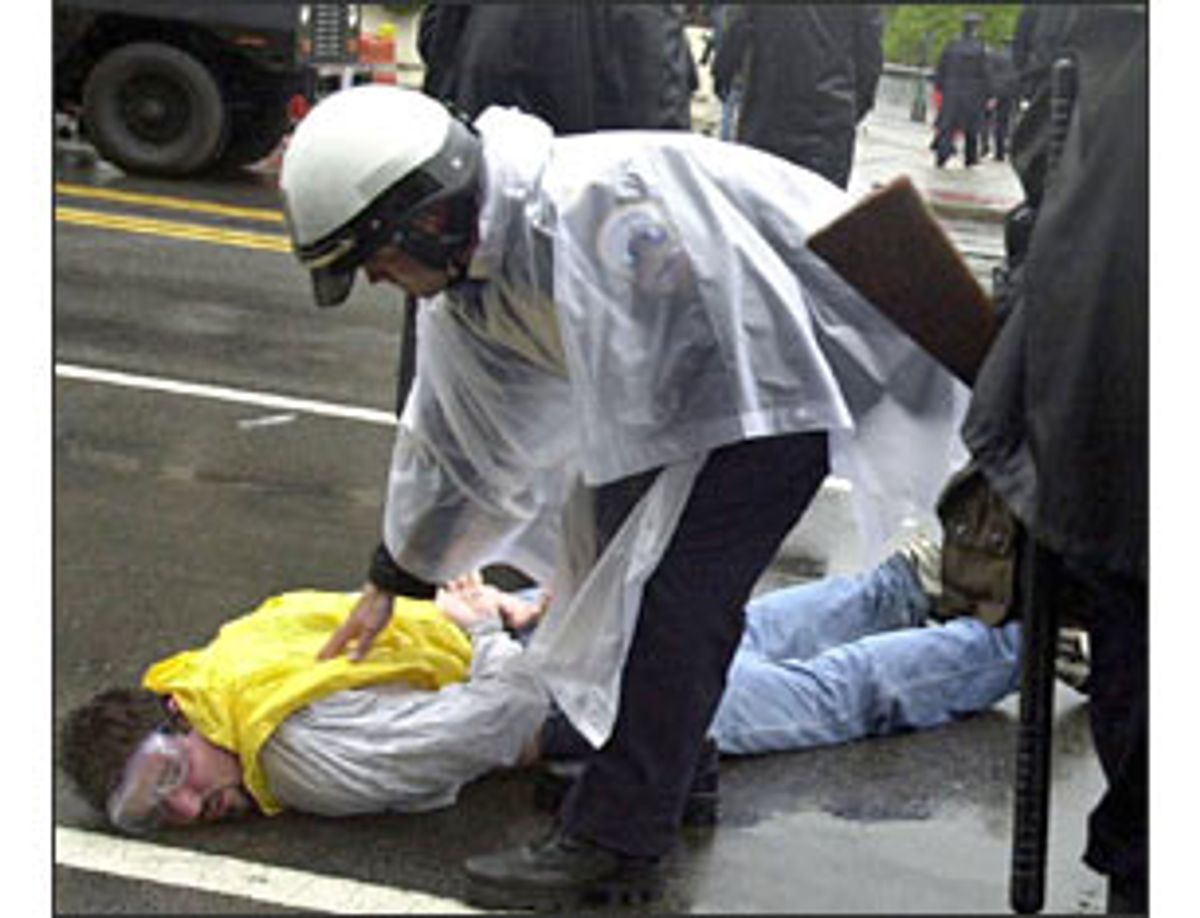 Last Monday morning I walked into my office at the U.S. Department of the Interior and found an urgent phone message stuck to my computer screen. The president of the board of Ozone Action, the anti-climate-change environmental group my husband founded and runs, had called. "Urgent, please call back," the message read. "Everything's OK."

I found out minutes later that my husband was the first person to be arrested in last week's World Bank/International Monetary Fund action, locked into metal handcuffs as he finished a speech and stepped off the roof of a Budget van parked in the middle of Pennsylvania Avenue and 19th Street in Washington.

I didn't have time to get mad, not yet. I was running to a meeting where I had to decide what extraordinary security precautions the Interior Department would take against the threat of thousands of angry protesters descending on the World Bank, two blocks away. My job was to make the decisions that would safeguard our historic building and protect our employees from ... my husband.

"Are you OK?" said the board chairman in response to my sputtering reaction. "Do you want me to call you back with updates during the day?"

"There's only one thing I need to know," I seethed. "Will he be home for dinner?" Slam the phone. Run to the security briefing.

Globalization is starting to get me down. In December I was jostled and gassed in the streets of Seattle during the World Trade Organization meeting. I was a delegate, head of the Interior Department's lonely delegation of two. In my two days there I missed almost every meeting and found myself trapped in intersections by chanting students wearing balaclavas or dressed as giant ears of corn and sea turtles. As I boarded the plane at Sea-Tac, I vowed not to put myself in that situation again.

I don't know why my first reaction to my husband's arrest was pure anger. I know he did it because he believes the World Bank funds projects that contribute to the changing of the Earth's climate, which is an enormous and scary global problem. I believe that civil disobedience is a grand American tradition, practiced by heroes such as Sam Adams, Henry Thoreau and John Lewis. Growing up in the '70s I obsessed over the '60s counterculture and anti-war movement. Mark Rudd and Abbie Hoffman were my cultural icons. I read James Michener's "Kent State: What Happened and Why" twice and wished I was 10 years older so I could have been part of it all.

Maybe I got mad because I also believe that when you are a parent, getting arrested is just not something you do, for any reason, unless you can't help it. If you are in jail, even for a few hours to make a political statement, something -- anything -- could happen. Your daughter could get sick at day care and the teacher could call you to pick her up and you wouldn't be able to because you are, ahem, in jail. And that's just for starters.

Could the jerry-rigged, Rube Goldberg life of a dual-earner household continue with incarceration as part of the deal? I didn't think so. Having my husband in jail kicked up an ill wind that threatened to blow down the house of cards we built to get the family through each day.

And then there was the annoying fact that while I was attending meetings with a very concerned security staff trying to keep order, my husband was the first one who was seriously out of order. Wouldn't the staff here assume that it would be more difficult for me to make good decisions when my husband's judgment, not to mention his behavior, was highly suspect? This had the makings of a serious perception problem in a town ruled by perception. Talk about "off message."

I lost all hope that people wouldn't notice my husband was in jail as soon as e-mails began arriving from around the country a few hours after the action. From the Berkshires: "Hey, I was just scanning the CNN Web site and noticed John was arrested! Hope you're OK!" And Seattle: "Just read about John's adventure on the Net, and just wanted you to know we're thinking of you all." Great.

A girlfriend called, angry that her husband had been AWOL with a large work commitment just as they were getting ready to put their house on the market. "He's been gone for three days," she said. "But it could be worse, I guess. He could be in jail, like your husband." Thanks.

At a meeting later in the day, a colleague sidled up to me and without a word wrote SUSPECTED SECURITY BREACH on his notepad with a giant arrow pointing in my direction. A funny guy.

John and I were married five years ago in what a friend called a '90s version of a '60s wedding. Sister Patricia Daly, a Dominican nun who foists shareholder resolutions on giant corporations to make them more environmentally responsible, officiated. She spoke about our joint commitment and passion for nature.

We've always been so well-suited, said our mothers, aunts and others, because we loved each other and loved something else, too. I've worked at the Interior Department in various positions since the beginning of the Clinton administration, helping protect parks, wildlife and other natural treasures. John started Ozone Action in the third floor of our Alexandria, Va., town house. It has grown into the largest group in the country working on climate change. Basically, we've always agreed. I don't like when he criticizes the president or the vice president, but other than that, we agree.

Now he was doing his job and I was doing mine and we were colliding head-on. His choice was to break the law. Mine was to work within the law. And complicating matters further were our two lovely daughters, happily playing at a day care equidistant between the Interior Building and the World Bank. While we were busy breaking and upholding the law during this week of protest, who was going to take them home, away from the masses and heat up their frozen pizza?

When I began to compare the important philosophical questions with the small concerns of our daily lives, the big issues started to seem fairly self-absorbed. After all, how can you save the world if you're having trouble picking your kids up from school?

John was released from the 2nd district jail three hours after he was booked -- his legal representation, bail money and moral support during this self-imposed tribulation were all provided with military-like efficiency by the protest organizers. That was good, because I wasn't prepared to offer any of those three things.

He arrived home that night with a marital record-breaking bouquet of flowers, easily $150 worth of roses, day lilies and foxglove. The next morning our toddler woke up with a fever and he quickly volunteered to stay home. Monday in jail, Tuesday rocking a sick baby to sleep.

I started to feel better about the whole episode. He didn't come home wearing a black ski mask so I figured he wouldn't make a career of eco-terrorism. "Good Morning America" called and asked to interview him. He said they were welcome to come to our house, but he wasn't making it into the city that day. I told him he would score major points with me if he did the interview with the baby on his lap, which he did. (He lost a couple of points for her weird hairdo.)

My mother dispatched herself from New Jersey to stay home with the children when the protests were supposed to get worse, so I could perform my job without worrying about their safety. At work I made a preemptive strike on the rumor mill by announcing to our political staff meeting that I was happy to announce my husband had been released from jail. "And now," I continued, "let me update you on the security measures for our building." Everyone laughed.

I was starting to see the humor, too. Inklings of pride found their way into my heart. Several co-workers sought me out to congratulate me on John's action, offering some version of "somebody's got to be out there raising questions about this stuff."

Civil disobedience is a grand American tradition. But so is getting home to have dinner with your family. There are few sane people who would have the temerity to get on top of a truck and speak to power and get arrested for it -- simply to make a point. My husband is one of them (though his sanity is still a question in my mind). And though I am loath to admit it, his actions are, in some way, a demonstration of his fitness as a parent. When our daughters learn the names of the people we honor for their willingness to break the law for their beliefs, one of them will be their father's.

Lisa Guide is the deputy assistant secretary for policy and international affairs at the U.S. Department of the Interior. She has two children.