It was lovemaking with the landscape. 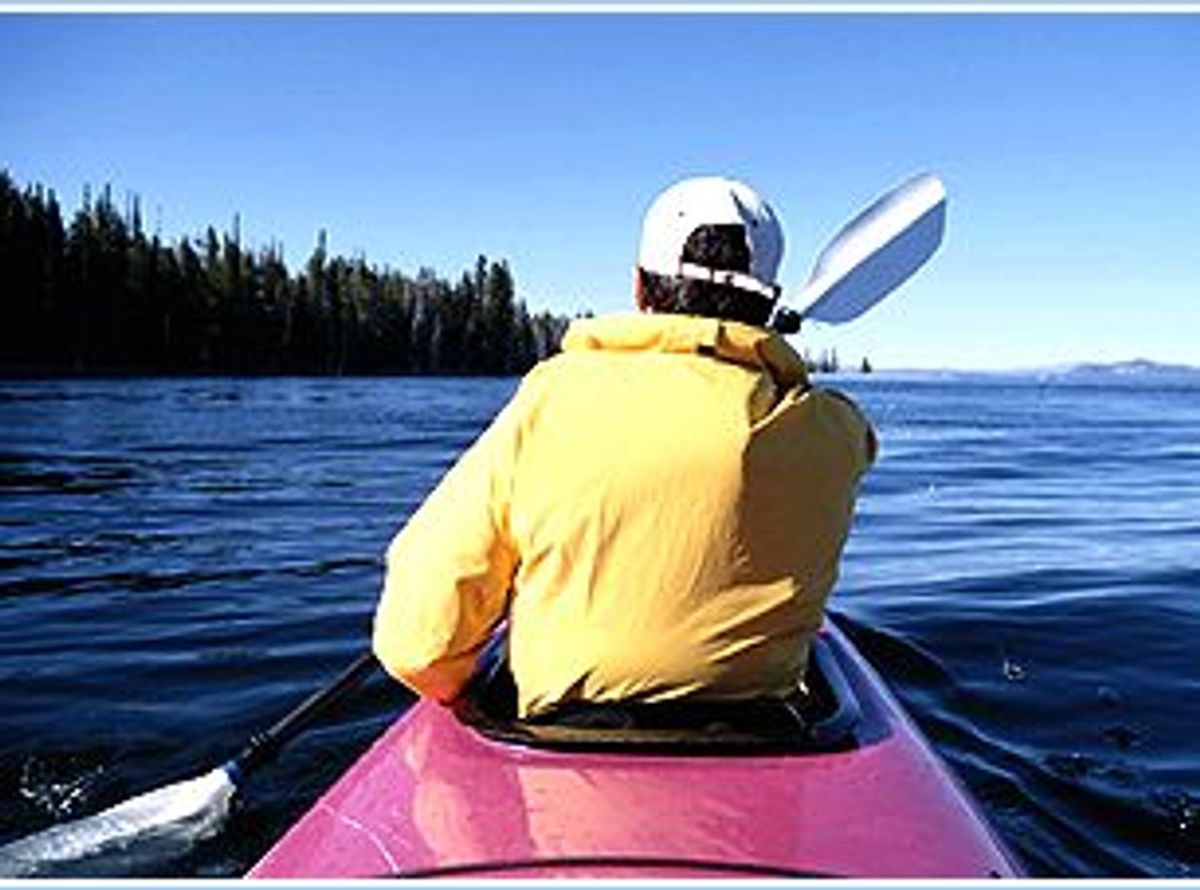 I was drawing back on the starboard end of the paddle, and trying, as the books said, to pull the boat, not the water. A twist of the torso, a snap of the elbow -- now the dripping blade was over my head and the other end was piercing the murky tide.

For moments at a time I was thoughtless, literally without thought, conscious only of the soft squeak of the PVC as the inflated chambers locked my thighs into what I grandly called "my boat," what the box called a "K-79 Inflatable Kayak," what the uninspired might call a pool toy. Boat-in-a-box. The words clanged in my brain while I strained my slightly middle-aged body against the paddle.

The tidal current of the short, narrow river was against me; every stroke was like walking uphill. Ahead was the grimy industrial town of Newport, the sweet plastic smell of the Ciba-Giegy paint factory following the tide straight to my nose. I had no reason to go to Newport, Del., no reason to fight the tide. Just a point on the map, a known distance to step out later to get a sense of how far I'd gone, how much work had been done.

I couldn't be the first person who'd felt like Zeus planning the world as I sat in a warm living room with map and dividers. To sit with a map -- better yet, a chart, or, better still, the chart's inland cousin, the topographic map. The topo was more than a picture; it was a like a visual narration of the landscape, true confessions of the points from here to there. There was intimacy here, the private thoughts of the countryside -- the wet spots, the dry land, the places where railroads scored the flats, the spots where houses blocked the view. No secrets.

I closed my eyes and pictured the topo, the curves and twists of the tiny river, to the place where it opened boldly into the Delaware, opened to a port where -- I knew, but can't remember why I knew -- most of the kiwi fruit and used Toyotas in the country start their American journey. I'd seen the ships many times from the highway bridge, 10 miles downstream, 10 miles more of floodtide I had no plan of fighting. Just to Newport, just to say I had.

I grew more forceful paddling, counting strokes in groups of 100. The river pushed back but didn't fight me away, a forceful lover, but a lover nonetheless.

I couldn't be the first person to see the similarities between pounding a kayak upstream and the images of passion, indeed, of intercourse. For the paddle caressed the water, the water stroked back; the prow cleaved the surface, the surface embraced and enveloped the length of the boat. At times the interplay was soft and warm; at others, active and forceful. It was lovemaking, intimate contact with the landscape.

And moving on the water, like sex, was prone to violent perversions. I remembered the duck hunters I'd seen upstream, the guttural outboard on a 14-foot aluminum phallus, rending the water asunder as they fired shotguns aimlessly at crows and kingfishers, indifferent to the highway over the embankment.

The kayak pried along further; I rested just long enough to lose a bit of ground to the tide. Finally, I was under the cold steel pipeline that crossed the river at the factory. It had been getting closer for over a mile and I was using it as a meaningless destination.

An additional 100 yards, to pass under the road bridge so I would have a clear spot to tick my distances. On one of the pilings under the bridge someone had hung a freshly skinned deer hide and head. I was startled for a moment but not surprised; nothing is surprising in a place one has never been before. It was probably poachers dumping evidence, maybe the same wild men I'd seen earlier in the duck boat.

Under the bridge I came about and let the current slowly swing me perpendicular to the flow. Every muscle ached, but the passion was complete, a moment's afterglow in the warming sun.

I couldn't be the first alcoholic to find that moments like this were the trick to quelling demons and staying sober. I remembered days past, sitting in the backyard, a warming morning sun, an empty pint brandy bottle at my feet, the last drops of spiked coffee bitter on my throat, my head filled with soft thoughts and warm-brained buzz, watching grass grow, wind nipping my nose, thinking, "This is why ... these are the moments ... this is why I come back to it, the moments that make me suffer the hangovers, the inertia, the fights, the melancholy ... make it all worthwhile ... these are the moments."

And from the silence of intoxication, another voice, shrill and correct: "Moments that will kill you."

Roland Wall is a writer in Wilmington, Del.