"Wanderlust: A History of Walking" by Rebecca Solnit

A delightful and mind-expanding look at one of the activities that makes us human. 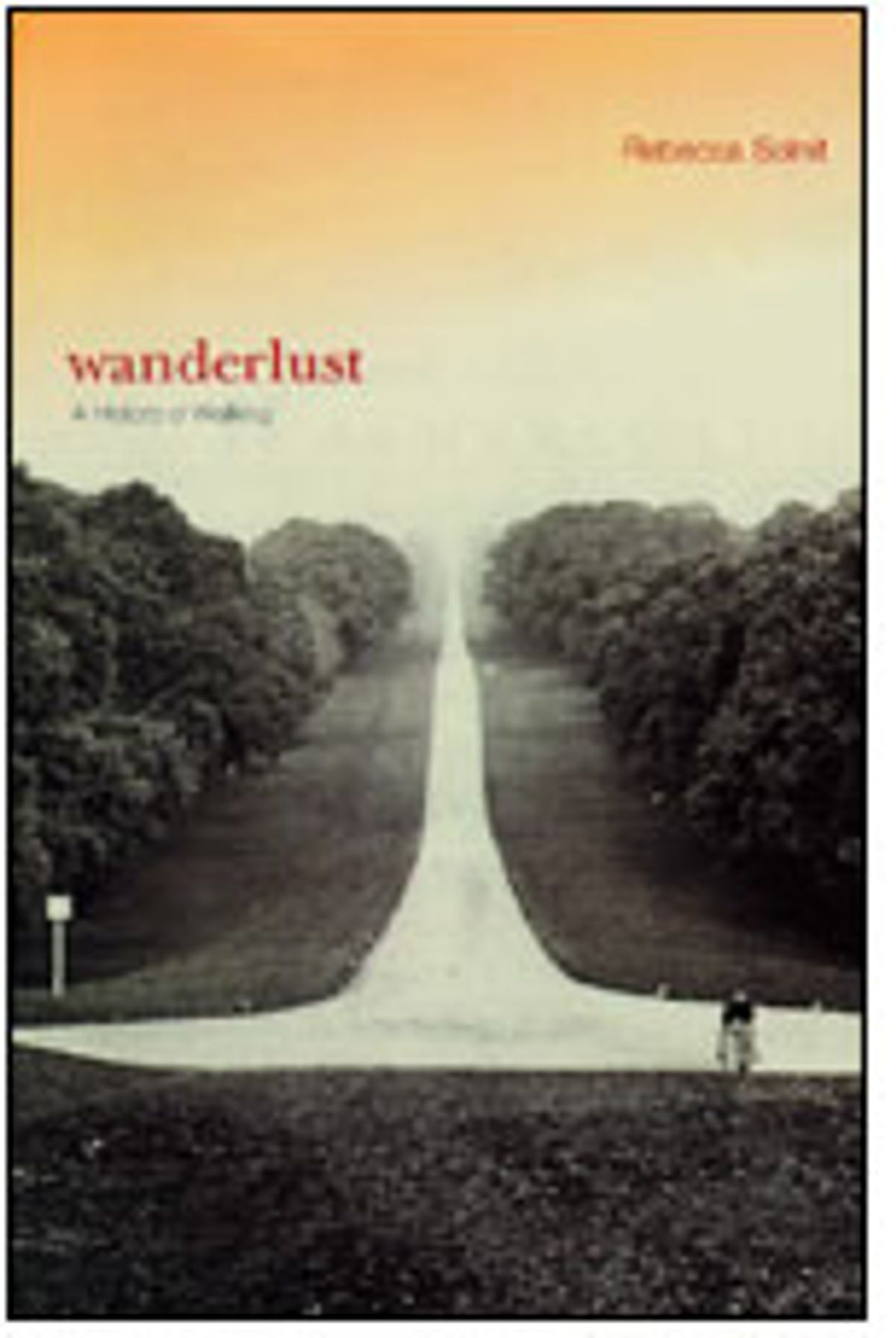 Discussing an eccentric 18th century peripatetic named John Thelwall in her new "Wanderlust: A History of Walking," Rebecca Solnit writes that he suggests "something of a pattern: autodidacts who took the trinity of radical politics, love of nature, and pedestrianism to extremes." While I'm pretty sure Solnit herself has a formal education, her astonishing range of reference and her indefatigable curiosity suggest the passion of an autodidact, and in every other respect she fits the pattern, too. Whether she takes this trinity to extremes is a matter of interpretation, but you could argue that even the attempt to write a history of walking -- arguably the defining human activity -- is itself extreme. Why not the history of talking, or breathing?

Of course, as Solnit points out, she has written a history of walking, not the history, which is all but infinite. Her history is, as she puts it, "an idiosyncratic path traced ... by one walker, with much doubling back and looking around." That's accurate, if a little modest; "Wanderlust" is a delightful, mind-expanding journey that strays from Søren Kierkegaard's Copenhagen and William Wordsworth's Lake District to the top of Everest and the New Mexico desert, from the first hominids to walk upright (whoever and wherever they were) to contemporary women who face the hazards of solitary walking. It's a journey led by a guide of tremendous erudition and just as much common sense, capable of slipping almost imperceptibly from the personal mode -- she describes several entirely non-metaphorical walks -- to the analytical and back again without appearing self-indulgent. (Full disclosure: I've had several friendly conversations with Solnit but don't know her well.)

Historically, walking has had many functions; for most people most of the time, of course, it was the only method of getting from one place to another. As Solnit says, "walking is a mode of making the world as well as being in it," and it allows us to know "the world through the body and the body through the world." This is not merely a theoretical construct. One of Solnit's principal concerns is that the connection between the body and the world that walking exemplifies has begun to fade as we spend more and more time isolated in technologized cells -- SUVs, offices, suburban homes -- and trapped in a culture that sees unstructured time alone in the world as inherently unproductive.

In search of the multiple meanings of walking in (mostly) Western culture, Solnit begins with the Athenian philosophers -- although no one really knows whether they walked to think -- and moves on through Jean Jacques Rousseau, Kierkegaard and Wordsworth, who collectively promulgated the romantic idea of solitary rambling as a contemplative exercise. Her layperson's exegesis of the anthropological and anatomical debate on bipedalism, or the question of when and why our ancestors first rose up on two legs, is a masterpiece of wit and economy. It's amusing, if not all that surprising, to learn that these discussions seem to be shaped as much by contemporary concerns about gender roles as by science.

The breadth alone of the material that Solnit has absorbed would have thwarted me; she's read obscure 19th century memoirs of walking tours, histories of mountaineering, feminist theory, studies of urban design, Victorian novels and Beat poetry. She knows more about the history of labyrinths and about the Renaissance mnemonic device called the memory palace than any normal person should. She's at her very best, I think, when her passion for history and landscape meets her progressive politics. Her mini-chapter on the late 19th and early 20th century right-of-way battles between working people and aristocrats in England's Peak District, in which the refined taste for natural beauty implied by the English landscape garden became democratized, is rich with brilliant observation and detail. Correspondingly, she's weaker as a literary critic and an urbanist; her chapter on the literature of walking in London and New York feels thin by comparison.

Her fine chapters on pedestrianism as a forum for protest and rebellion, from Paris to Prague to San Francisco, and on the methods of social control that have often prevented women from being walkers lead her finally to Las Vegas, of all places. It's typical of Solnit's daring and of her lyrical, unquenchable optimism that she sees hope in America's most suburbanized, most theme-parked city. On the crowded sidewalks of the Strip, with its synthetic volcanoes, pirate ships and Venetian canals recalling the 18th century pleasure palaces of Europe, she finds evidence that "the thirst for places, for cities and gardens and wilderness, is unslaked, that people will seek out the experience of wandering about in the open air to examine the architecture, the spectacles and the stuff for sale, will still hanker after surprises and strangers."

In the end, the guiding spirit of "Wanderlust," the lonely traveler always in view on Solnit's horizon, is not Wordsworth or Rousseau but Walter Benjamin, whose rambles through the streets of Paris had the sense of wonder, the air of open-minded exploration and imminent discovery, of Solnit's own journey. Solnit observes the sexism and snobbery inherent in Benjamin's idea of the flbneur, the idle, solitary gentleman strolling through the crowds, but she can't quite resist it. In describing Benjamin's writing she seems to be half-consciously describing her own: "more or less scholarly in subject, but full of beautiful aphorisms and leaps of imagination, a scholarship of evocation rather than definition."