The flower of cities all 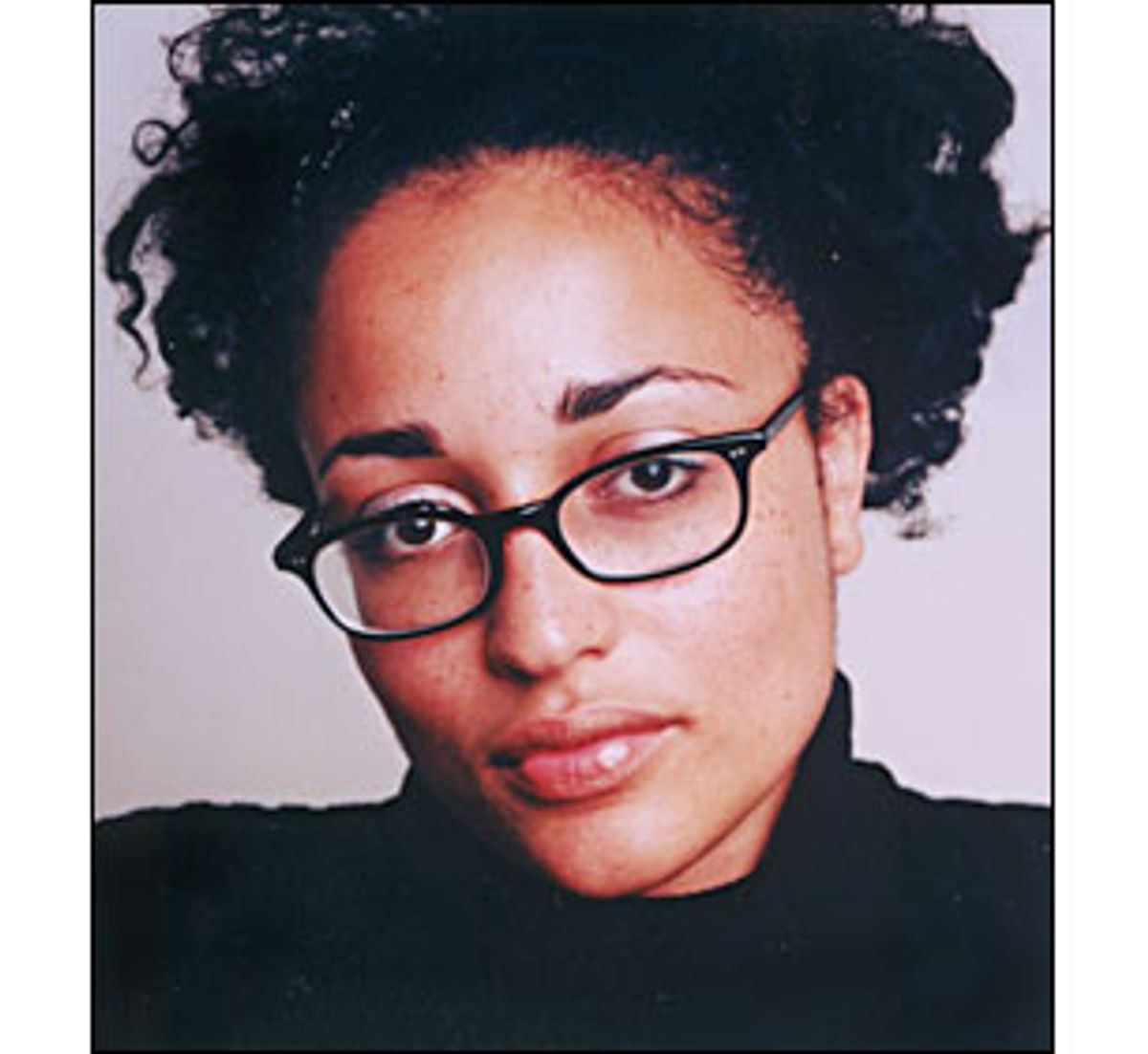 The London of "White Teeth" is a place where stories proliferate, where the varieties of human life are in merry, buzzing, mischievous proximity. Hortense Bowden, an 84-year-old Jamaican immigrant, rides to her Jehovah's Witnesses meeting in a sidecar hooked to the Vespa of very freckled, very red-haired Ryan Biggs, who dated her rebellious daughter, Clara, years ago. Fifteen-year-old Millat Iqbal, the effortlessly charismatic, stunningly sexy first-generation son of two Bangladeshi Muslims, tries to mend his spliff-smoking, heartbreaking, Westernized ways by starting a group called Keepers of the Eternal and Victorious Islamic Nation, an organization plagued by its "acronym problem" -- KEVIN, hardly a thunderous alternative to British blandness. And two old war buddies, Samad Iqbal, Millat's father, and blond Archibald Jones, husband of Clara, sit talking for hours in O'Connell's, "an Irish poolroom run by Arabs with no pool tables." This London is a place that makes you marvel, between laughs, at the agility, assurance and discernment of Zadie Smith, the 24-year-old first-time novelist who is its creator.

Like all the best comic writers, Smith is dead serious. She's got things to say about some big questions, and not just the politically trendy ones that the multicultural nature of her cast of characters might suggest. In the novel's opening scene, it's 1975 and 47-year-old Archibald, worn out and hopeless after a divorce from a mad Italian named Ophelia, decides to gas himself in his car on a street in Cricklewood. His plan is thwarted when an irate hallal butcher -- alerted by his son, who'd come out to clean pigeon crap from the shop window -- demands that Archie get his car out of the delivery zone. "If you're going to die round here, my friend, I'm afraid you've got to be thoroughly bled first," the butcher tells him.

From this initial shot of high-octane gallows humor, "White Teeth" is life-affirming in a thoroughly unsentimental way. "Although he was not one of her better specimens, Life wanted Archie," Smith writes, "and Archie, much to his own surprise, wanted Life." And we're off.

Elated and unburdened, Archie ends up at a free-love party, where he's knocked out by his first glimpse of the beautiful, 17-year-old Clara, "black as ebony and crushed sable," her one physical flaw a missing set of front teeth, courtesy of a mishap on Ryan Biggs' Vespa. Clara, for her part, is keen to escape the Jehovah's Witness hell of her mother's house.

Within six weeks this unlikely pair is married. But what pair of people isn't unlikely, when you get right down to it? We're all the products of coincidence, of alliances born of hopelessly mixed motives. With its hilariously winding plot lines and vividly drawn, almost Dickensian characters, "White Teeth" reminds us that while all bonds between human beings have an element of randomness, the wonder is that quite often, for one reason or another, they actually hold.

The friendship of Archie and Samad, forged inside a stifling five-man tank during the final weeks of World War II, couldn't be more improbable: The fast-talking Samad is a handsome, boastful, educated Bengali determined to grab some glory despite his lowly rank and the indignities of his assignment to the tank unit; Archie is a practical-minded, good-natured, unremarkable lad from Brighton City. And yet their relationship anchors the two men when they find each other again decades later in London. Both now middle-aged, their personalities are just as distinct even after three decades of disappointments and frustrations.

Smith creates equally compelling characters in the two men's much younger wives, Clara and Alsana, who become pregnant at the same time (Clara with Irie, Alsana with twin boys, Millat and Magid) and strike up a wary friendship. Clara turns out to be curious, sweet-natured and slightly timid, while Alsana is shrewd and fierce, far from the easy bargain Samad assumed her to be when their marriage was arranged.

"By Allah, I will always give as good as I get," Alsana yells when her niece tries to talk her into a Western approach to her marital difficulties. "The truth is, for a marriage to survive, you don't need all this talk, talk, talk, all this 'I am like this' and 'I am really like this' like in the papers." Is it surprising that Clara and Archie's sincere, self-doubting daughter, Irie, develops a desperate, pining love for the smooth, thoughtless Millat? You could call it arbitrary, or you could just call it life.

Alsana's view of the English -- they're "the only people who want to teach you and steal from you at the same time" -- owes something to her amusingly jaundiced eye, but it also captures the inevitable push-pull, the love-hate between the immigrants and the native British in "White Teeth." As we learn that an Englishman seduced Irie's Jamaican great-grandmother, leaving her pregnant with Hortense, Smith comments in an aside, "oh, he loves her; just as the English loved India and Africa and Ireland; it is the love that is the problem, people treat their lovers badly."

Irie's and Millat's search for roots -- the novel's central metaphor and the source of its title -- both preoccupies and paralyzes them. They crave the same kind of family information that, instinctively, they'd rather not know; the political crimes and dislocations and personal tragedies that led to their English births are not pretty.

Smith makes this by-now-familiar take on the immigrant's lot fresh again by interweaving it with a lively subplot involving the family of Marcus and Joyce Chalfen, a research geneticist and a pop horticulturist. The Chalfens are just as obsessed as Irie and Millat are with questions of lineage, even to the point of creating a self-serving family ideology in which every aspect of "Chalfenism" is celebrated to nauseating, hilarious comic effect. The native-born aren't immune to the need to imagine that they come from special stock, and they're more vulnerable to racist blindness and the other pitfalls of that need.

Much of the pleasure of reading "White Teeth" is in the playful, riffing, bold yet controlled way Smith's prose moves. Her sentences are often juiced-up catalogs of words, images and expressions, with a vernacular rhythm that can convey the sweep of history in an almost offhand way:

A wall was coming down. It was something to do with history. It was an historic occasion. No one really knew quite who had put it up or who was tearing it down or whether this was good, bad, or something else; no one knew how tall it was, how long it was, or why people had died trying to cross it, or whether they would stop dying in future, but it was educational all the same. As good an excuse for a get-together as any. It was Thursday night, Clara and Alsana had cooked, and everybody was watching history on TV.

As the novel's point of view shifts seamlessly from character to character, we get a chorus of voices, from Millat's streetwise "Raggastani" argot ("I'm fuckin' wired, yeah? This whole business, man. This fuckin' geezer, man. He's a fuckin' coconut -- I'd like to fuck him up, yeah?" he says on his way to protest, for reasons he's not entirely clear on, Salman Rushdie's "The Satanic Verses") to Joyce Chalfen's middle-class maternal babbling ("You'll stay for dinner, wont you?" pleaded Joyce. "Oscar really wants you to stay. Oscar loves having strangers in the house, he finds it really stimulating. Especially brown strangers!"). In "White Teeth," everyone may have his or her own private idiom, but Smith has managed to make them flow together; she's orchestrated a conversation that crosses the boundaries of race, age and sex.

Smith is just as interested in how printed words circulate. Like a DJ sampling sounds, she presents her readers with business cards, advertisements, lists, encyclopedia entries, press releases. There's a mock-heroic timeline of "The Post-War Reconstruction and Growth of O'Connell's Poolroom" ("December 1980: Archie gets highest recorded score ever on pinball: 51,998 points"); there's an excerpt from "The New Flower Power," written in 1976 by Joyce Chalfen. ("The fact is, cross-pollination produces more varied offspring, which are better able to cope with a changed environment ... Sisters, the bottom line is this: If we are to continue wearing flowers in our hair into the next decade, they must be hardy and ever at hand ..."). Smith is clearly having fun with all this mimickry, but it's also entirely appropriate to her larger purposes; you could say that, just as she wants to characterize contemporary England as a nation defined by its many intersecting cultures, she sees the novel as a heterogeneous, improvisational genre. (Skeptics might disagree with her on the former, purists on the latter.)

"White Teeth" is dazzling in a jazzy, modern way, but in its self-assurance it also calls to mind the capacious novels written during the 19th century, before writers, if not readers, lost confidence in the ability of the novel to capture reality. "Every moment happens twice: inside and outside, and they are two different histories," Smith writes. It's a crucial insight into what a great novel should deliver, and the abundantly talented Smith has all the makings of a major novelist: She sketches her characters' inner lives in swift, sympathetic strokes, then swoops back out to paint a dead-on portrait of the place, the time, the culture in which those inner lives take place. And it's all presented with a generous good humor, a conviction that even in the dingiest corners and the most downtrodden lives there's something to be redeemed if you can find the right perspective.