The genome project is getting the buzz. But the real breakthroughs may come from labs out of the limelight, like Gene Logic. 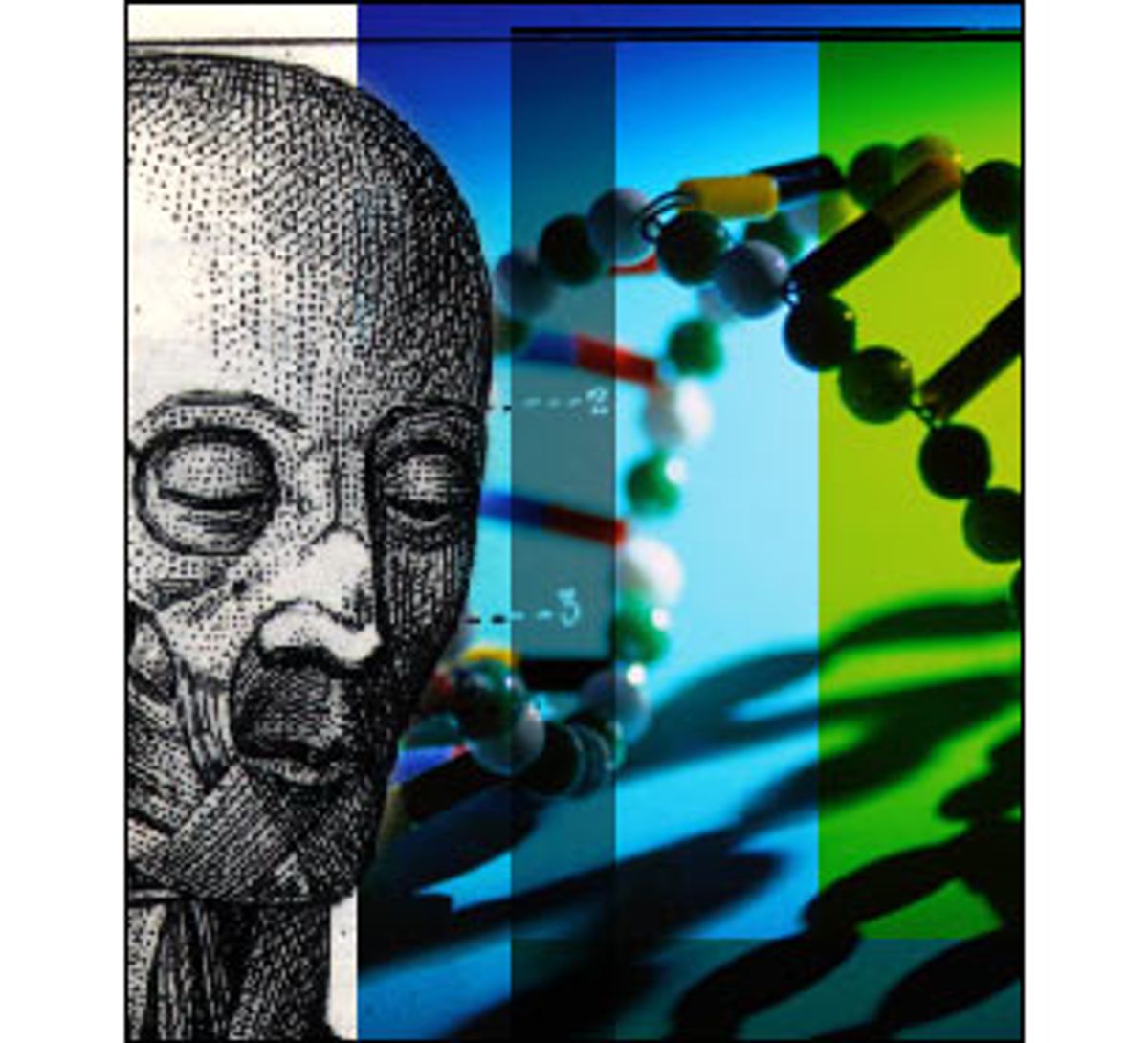 "Which organ do you want to look at?" asks Jeff Tomlinson.

I'm sitting in front of a laptop with Tomlinson, director of strategic marketing for a suburban Washington company called Gene Logic. We're scrolling through a list of body parts -- stomach, skin, heart, pancreas, etc. -- in a remarkably sophisticated genetic database that the company believes can revolutionize biomedical research. Subscribers, such as scientists and drug companies, can conduct virtual research by tapping into this vast storehouse of knowledge about genes and disease.

"Uh -- breast?" I blurt out, wondering as I do whether I'm thinking about the breast cancer in my family, or just being a guy.

It isn't an actual breast, but a list of all the genes active in the breasts of several dozen women. We have the option of looking at the breasts of alcoholics, tobacco users, pre- and post-menopausal women, blacks and whites -- more than 100 variables in all.

Because I'm stymied about which to choose, Tomlinson does a quick search on about a dozen women in their 50s.

A human has about 100,000 genes. At any time, in any tissue, only a limited number of them are expressed, or "turned on" to send cells the messages that guide fundamental biological processes, like growth. In the breast sample, 7,300 to 8,600 genes are activated -- and only about 5,000 of the genes are the same throughout the sample. When Tomlinson calls up a sample of breast cancer patients, their patterns of gene expression are entirely different.

It has often been noted that the DNA sequences of any two people are more than 99 percent similar. Even a chimpanzee's DNA is close to 98 percent similar to that of the average human. Gene Logic seems to have captured something interesting, which could be valuable for treating disease. This database shows that people with nearly identical DNA can have vast differences in genetic expression.

It also shows how uninformative, for all its grandeur, is the raw sequencing of the 3 billion base pairs, the building blocks in our DNA. The Human Genome Project, which is getting massive media attention as its nears completion, is just a first, crude step. The research that has the potential to change medicine, to produce new treatments and alter our very notions of disease, is happening largely out of the limelight, at places like Gene Logic.

When the sequencing effort got officially underway in 1990, at the beginning of the Human Genome Project, it inspired awe. Nobel laureate Walter Gilbert said reading the genome would allow us to "know what it means to be human." Newsmagazines fantasized about a "Gattaca"-esque future in which a doctor would swab your cheek for a DNA sample, pop it into a machine and produce a genetic readout of your future health and potential.

The genome project has sped discoveries about disease and human evolution and criminal forensics. But the completion of this encyclopedia has become a largely symbolic milestone -- it's come down to a horse race between a company, Celera, and a government-funded consortium. Neither the public nor the private versions of the genome will tell us what all that DNA does. The bracing truth about molecular biology is that the more we learn, the more we realize what we don't know. To understand the contribution that a company like Gene Logic may yet make, you have to start with that deflating realization.

Although we now have the letters of this so-called human alphabet, we've identified only about a third of the genes it spells. Fully grasping what these genes do will take decades because most diseases and traits result from a combination of many genetic and environmental influences. Too, different genes are turned on in different quantities, in different tissues of the body at different times.

It's no wonder, then, that the genome project has not yet had much impact on health. "The effect on clinical medicine has been small up to now," acknowledges Francis Collins, the director of the genome institute of the National Institutes of Health. But he adds, optimistically, "There will be an explosion of clinical applications in the next 10 years."

That is certainly an optimist's view, yet many biologists hold it.

Much of the information was compiled from public sources by brainy software developers hired away from Lawrence Berkeley Laboratory. Gene Logic adds a crucial element: information about gene expression, which the company generates by collecting thousands of tissue samples and tallying up the genes turned on in them.

To do the tallying, Gene Logic uses large numbers of gene chips -- silicon chips upon which are glued thousands of fragments of DNA. The company produces or buys the chips from a Silicon Valley firm, Affymetrix. After a largely automated process that takes a few days, the DNA on the chips reads the DNA in the tissue samples and feeds
terabytes of data into computers.

Most of the work goes on in a low-slung building formerly occupied by Oncormed, a company that did diagnostic DNA testing for things like breast cancer. Gene Logic absorbed Oncormed last year, mainly to gain access to its tissue sample network. It dropped diagnostic testing, which turned out to have limited value because disease genes tend to have dozens or even hundreds of mutations, each with a potentially different medical significance.

"It would be impossible to do mutation detections for 42,000 genes," says Christopher Alvares, a former Oncormed employee who oversees quality control for the Affymetrix chip processing part of Gene Logic. "To do a complete genetic profile of every person would take tremendous resources."

Gene expression appears to be more promising for medicine. Expression patterns can suggest biochemical pathways that might be enhanced or muted by a new drug or therapy. Gene Logic has already landed Pfizer and another top-tier pharmaceutical company as full subscribers to its database, and has also established collaborations with a handful of academic researchers. To hear these scientists discuss the results, the Gene
Logic approach is yielding a new paradigm of biological research.

"The chips identified literally hundreds of novel genes. A large portion of the genes were not even thought to be associated with cancer," says Reginald Lord, a University of Southern California surgeon who is studying esophageal cancer in a collaboration with
Gene Logic and other scientists. "If we had taken the rational approach, formulating a hypothesis and testing it, it would have taken decades to come up with these genes. With this chip study you go straight to the money."

Previously, Lord and his colleagues had been examining the effects of a limited number of genes in esophageal cancer. Suddenly, they had a real-time profile of the performance of 42,000 genes in their patients. (The Affymetrix chips used by Gene Logic can test the
levels of 42,000 genes at a time. The new Affymetrix chip tests for 60,000.)

A wealthy man with esophageal cancer approached Gene Logic seeking information about the best chemotherapy approach to treat his disease. (Company officials are stingy with details, citing privacy concerns as well as pending publication of the data.) To help the scientists get a grasp on the biochemistry involved, the patient ended up funding a study of esophageal cancer, a disease that hits about 15,000 Americans each year and is said to be the fastest-growing cancer in the developed world.

On one of two mornings I spent at Gene Logic, Jeff Tomlinson asked the computer to select the 500 genes most commonly expressed in the esophagus. For any of these genes a click took him to references in the medical literature, to similarities to other known genes in the huge federal databank, to flow charts of the gene's function in biochemical pathways. When he drew up a top-500 list for cancerous esophagus, many of the genes were different.

"Right now, cancer has all these chemotherapy cocktails, with each chemical aimed at intervening in a particular biochemical pathway," Tomlinson said. "With this database we can look at a pathway, and if it's not over-expressing a gene, we know that part of the cocktail isn't needed.

"If I was a patient with cancer, I'd want to come here and ask that," he added. "Maybe I can drop one drug, and double the dose for another -- so that if I have to poison myself, at least I know I'm doing it in the right direction. But we're not supposed to say that
because this hasn't been used yet to stratify patients. For the
moment it's just a research tool."

Like most biotech stocks, Gene Logics soared early this year on news that scientists were close to finishing the genome project. Its stock went from $6 on Dec. 2 to $152.50 on March 2. At that point, the company was worth $4.5 billion -- three times more than U.S. Airways. The stock price sank, with other biotech stocks, after President Clinton and Britains Tony Blair called March 14 for unfettered research access to genetic data.

The markets reaction to the Clinton/Blair statement revealed how ignorant the market is about genome science. The markets responded as if the statement would hurt the biotech industry, when in reality the Clinton and Blair were obliquely criticizing the practices of Celera and a few other companies that patent raw DNA sequence information.

When its stock price was surging in January, Gene Logic got $270 million in fresh financing and plans to use it to expand the collection of tissue samples in its database from 2,500 to 30,000.

Whether pharmaceutical companies use Gene Logic or other databases (there's really no
competition for the company's exact product), the major firms are sinking millions of research dollars into data mining. Some are collaborating with genome companies; other drug giants are leaping in on their own. They are all amassing thousands of potential drug targets by scanning the genome.

The question is, who will be smart enough to organize the data intelligently? And when all is said and done, will the automation of biological knowledge take us closer to self-knowledge?