A primordial nest of shredded spuds from which fond memories -- and life itself! -- have sprung. 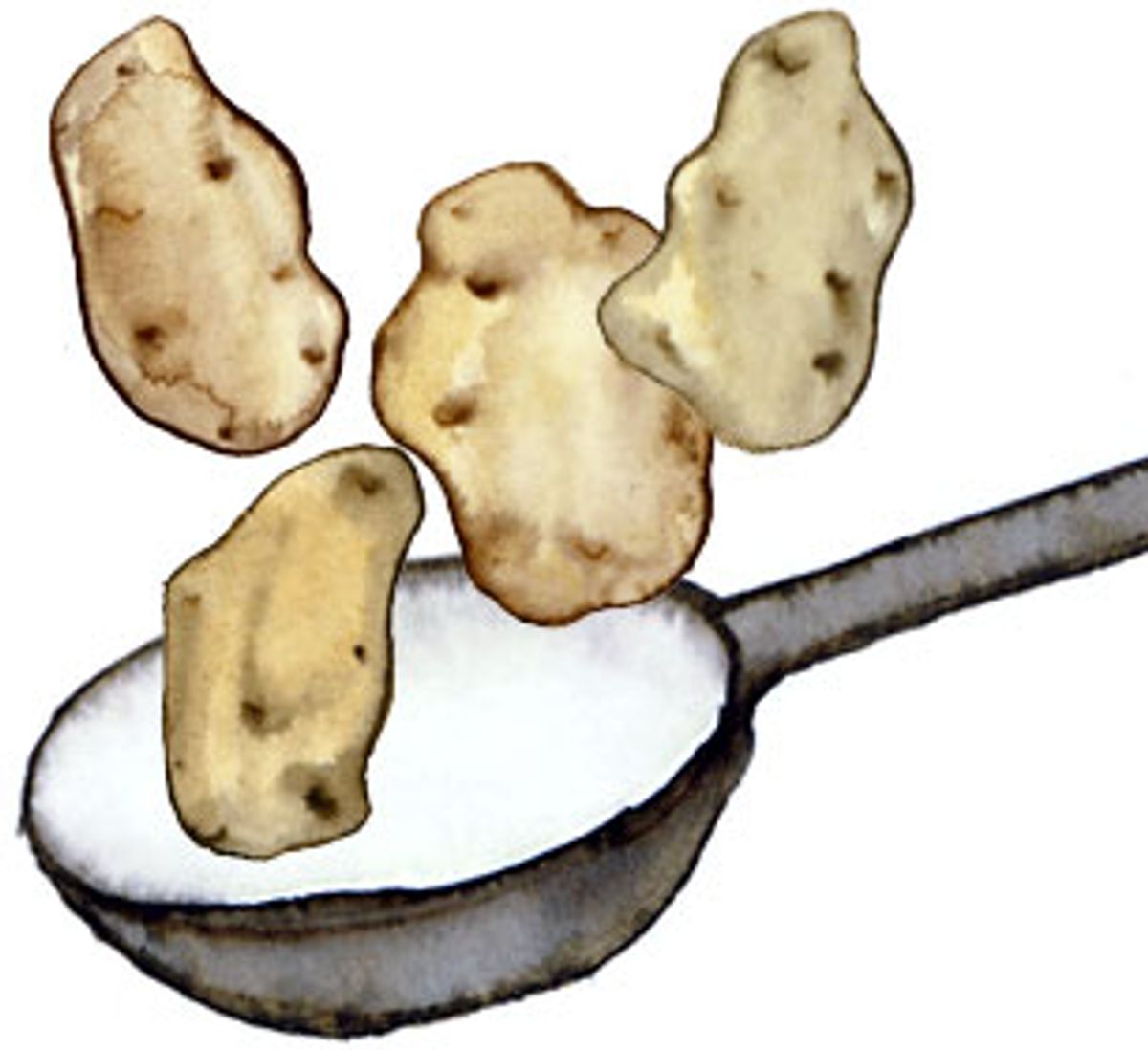 I owe my life to hash browns.

Fortunately -- for the sake of my own, and my descendants', existence -- my mom didn't hang up. Fortunately, she laughed. Fortunately, she remembered the line, which came from a Eugene Ionesco play they had both seen the night they met.

Neither of my parents can remember the name of the play: My dad thinks it may have been "The Woman With Three Noses"; my mom recalls it as something like "The Woman With One Eye." I can't find any proof that a play exists under either name. I thought maybe it could have been "The Rhinoceros" -- the only Ionesco play I had ever heard of -- but the closest reference I could find to hash browns in that script was a stage direction that called for an "edible cigarette" (a hash one, perhaps?).

I hope to someday find the play about the woman with the unusual face, whoever she may be. It would be amazing to see, in black and white, the line that brought my parents together, the line that launched their relationship, a union that has been as tangled and nourishing as a wild mesh of potato shreds. I would love to trace my existence back to its absurdist, root-vegetable roots.

My husband and I had an absurd hash brown connection of our own early in our relationship. A couple of months after we met, we had the chance to housesit for one of his mother's friends. Our first morning there, I woke up early and thought about how nice it would be to make a romantic breakfast.

Living in a dorm, I never had the chance to cook for Matt before. We were young and poor and hadn't brought any groceries with us to the housesitting house, so I poked around the woman's kitchen, looking for possibilities. Aside from a packet of stale pappadam, all I could find was a bag of potatoes, just starting to sprout. I discovered some garlic, rooted around for some oil and set about gouging out the pale eyes of the spuds.

This was my first attempt at making hash browns, but I figured it would be fairly simple. How hard could it be to fry up some potatoes? I heated the oil in a cast-iron skillet, tossed in the garlic, then added the sliced potatoes just as the garlic began to burn.

"Mmm, it smells good in here," Matt said as he came down the stairs. He walked across the kitchen to kiss the back of my neck. I swiveled to give him access to my lips. When I turned back to the pan, the spatula had melted.

It looked like the tip of a soft-serve ice-cream cone, its boxy edge liquefied into a dramatic swoop. In my limited kitchen experience, I had seen nothing wrong with using a rubber spatula in a hot frying pan. Now the potatoes were completely threaded with ribbons of rubber.

Matt was very sweet about it, and insisted we eat the hash browns anyway. We spent most of the morning pulling chewy strands out of our mouths and spitting them into our napkins. Needless to say, I didn't find Matt's heart through his stomach.

hash n (1662) 2: a restatement of something that is already known

More than 12 years later, I had never even attempted to make hash browns again. Hash browns had become a going-out-to-breakfast treat for us, not something to eat at home. We are a family of diverse eaters -- I'm a vegetarian, my omnivore husband has definite carnivorous tendencies, our son has been a "lacto-(except melted cheese-o)-ovo-baco vegetarian most of the year and our daughter vacillates between these camps. Hash browns are one thing we can always enjoy together.

We can debate the additions of onions and green peppers. We can discuss the relative merits of ketchup and hot sauce (and whether you should pour the stuff over the top or goop it on the side for dipping). We just can't tell you how to make the spuds at home.

Recently I figured it was time for me to give cooking hash browns another go. The dish is part of my personal mythology, I reasoned; the least I could do is figure out how it's made. As long as I could manage not to rubberize the potatoes, I was sure my experiment would be a success.

It bears mentioning that in the past few years, I have become a lazy cook. I love to eat, I adore good food, but somehow the process of cooking has become something less than bliss for me. I think the creative energy I used to pour into soufflis is now being channeled into my writing. My writing gets the freshest, most savory part of me; the kitchen gets my leftovers, my dried-out scraps. I hope to someday reclaim my inner Wolfgang Puck, but for now we eat takeout burritos and pasta with jarred sauce far more often than I'd like to admit.

When I started to look for hash brown recipes, I anticipated only a few ingredients, only a few steps from start to finish. It appeared that I was fooling myself. "The Joy of Cooking" gals wanted me to pour a quarter-cup of cream over the hash browns while they cooked. Julia Child's hash brown "flipping" instructions freaked me out. Even though she says she prefers a "slightly messy flip," her description of a "daring flip" was a bit too intimidating for this cook. (Child also says she likes to use her hash browns as a bed for game hen, which, I've heard, can be slightly messy sleepers.)

I decided to blend a couple of the recipes I found into one gloriously mid-20th century casserole concoction, the kind of casserole that always embarrassed my friends when I was a kid but that I secretly pined for. Most of the steps involved simply opening packages and mushing the ingredients together -- perfect for my lazy frame of mind. Plus, my daughter was more than happy to crush the cornflakes.

The only "tricky" parts of the recipe required melting some butter and chopping a few scallions, which I ended up being glad for -- their fresh green sting took away some of my guilt about cooking an otherwise completely processed-food meal for my family.

Opening the soup can, I felt like the mutant child of Susie Homemaker and Andy Warhol.

To my surprise, what started out pretty much as a joke ended up being a decadently satisfying dinner. The casserole was pure comfort food, so rich it made me gasp for air. With a Greek salad (from a bag -- don't give me too much credit) and some baby peas, this proved to be quite the square meal, maybe even a cubic one.

The success was due, I'm sure, to the magic influence of the hash browns, which pretty much disappeared into the glop that made up the rest of the dish. Even hidden under cream of potato soup, even blanketed with sour cream, hash browns will forever taste like new beginnings to me -- a taste I'll always be grateful for.

"I love hashed brown potatoes!" my dad told my mom the first time he called her, 36 years ago this week. I do, too. With a vengeance. Maybe next time I'll even try to fry a batch -- with a metal spatula, of course -- myself.