Not big in Japan

Arthur Golden's American bestseller, "Memoirs of a Geisha," gets a thumbs down from the country where it's set. 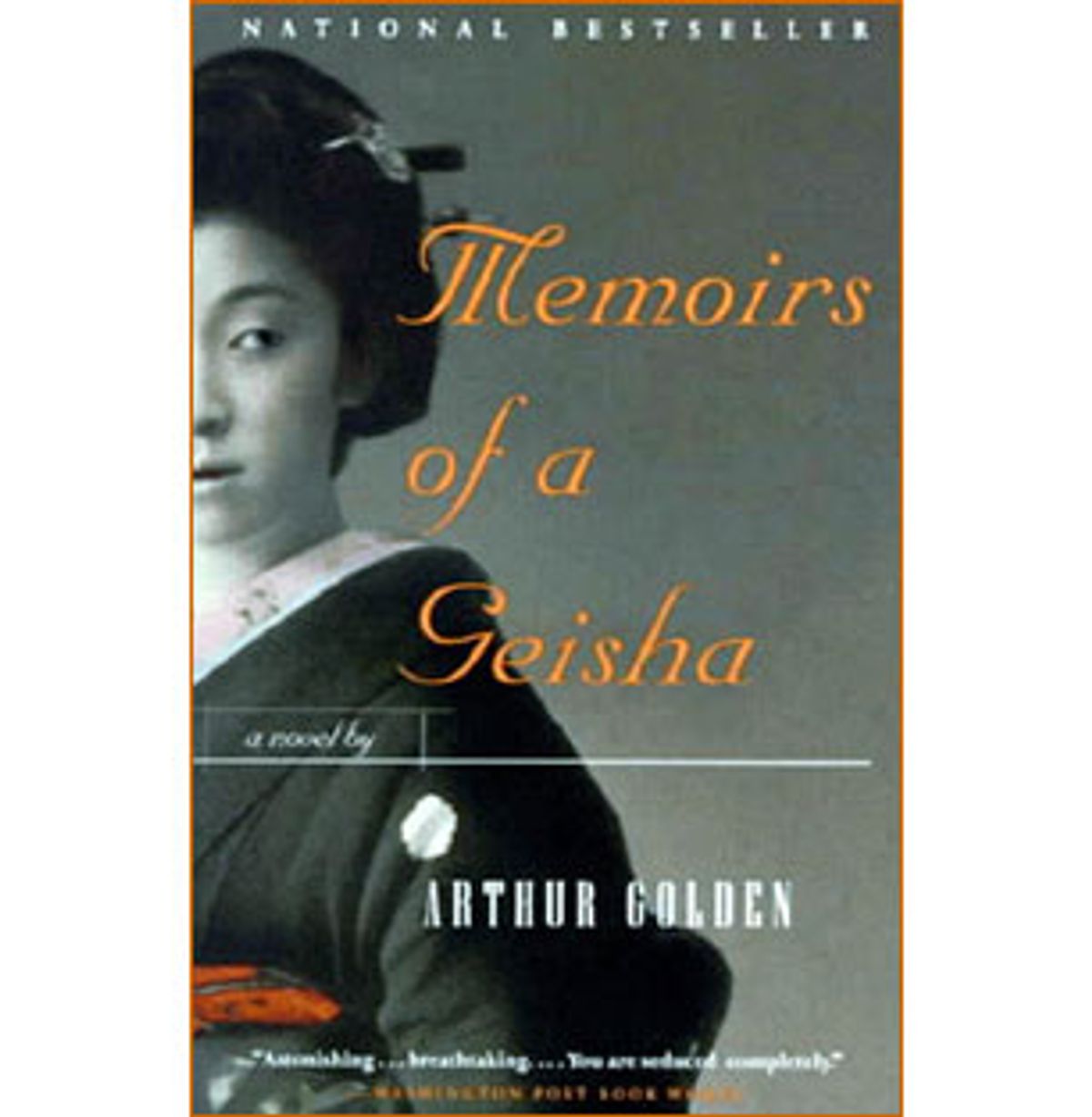 In America, everyone loves her. Through her journey from fisherman's daughter born near the Sea of Japan to her ascent into the upper echelons of Kyoto geishahood, Arthur Golden's Sayuri has charmed Western hearts, and his novel has leapt onto American bestseller lists. Now, more than two years after "Memoirs of a Geisha" was first published in the United States, the book is getting a big shrug from Japanese readers and a decisive thumbs down from the woman Golden credits with teaching him the most intimate aspects of geisha life.

"Sayuri" -- as the novel is called in Japan -- is in all the posh bookshops in central Tokyo, from Aoyama Book Center to Shibuya's Book 1st, where browsers can find it wedged between the likes of Banana Yoshimoto's latest novel and other recent translations, such as Melissa Bank's "The Girls' Guide to Hunting and Fishing." In proper Japanese style, the book has been elegantly packaged with a traditional textile pattern cover (making it look serious and not sleazy) and an extra half-sleeve informing readers that it has been a bestseller in the United States and will be made into a movie by Steven Spielberg.

Although Bungei Shunju, the book's publisher, says it's satisfied with the book's performance so far -- sales have reportedly hit 50,000 since it was released in November -- "Sayuri" hasn't launched a "geisha boom" in Japan. In fact, it's fairly rare to find someone who has read the 650-page novel (published in two volumes) from beginning to end. Bookstore managers say the book is just not that popular.

The main reason for this is that a foreigner writing about a topic like geishas seems kitschy to Japanese readers. An editor at a rival publisher, which turned down a shot at "Memoirs," says: "Books written by foreigners that are set in Japan spend too much time explaining the exoticness of Japan, and readers here don't need that. They've been exoticised before. Geisha stories just aren't interesting to them, and furthermore, they feel like Western writers focus too much on the seedy, sexy side rather than the cultural side."

And as Nagusa Toda, a 29-year-old artist and Web designer puts it, "In Japan, geisha is a cultural icon. It's nothing new to write about them." Moreover, there's mistrust when it comes to a book written by a foreigner on a world so closed off to even the average Japanese person.

Part of the problem, according to Japanese academics, is that Japanese audiences aren't interested in having their culture explained to them through Western eyes. "This book is tapping the image that Americans already have of Japan," says university lecturer and translator Hiroko Hagino. "When Americans think of Japanese culture, they may think of ninja and shogun. When I went to Nobu restaurant in New York, I found that it's not typical Japanese, but it's exactly what Americans expect -- all bamboo and lacquerware. It's the American version of what America wants to imagine it's like in Japan."

Of course, in America, the book was praised for its authenticity. Certainly Golden's nine years spent researching it add to his novel's credibility. While most Western readers have no basis to judge its accuracy, they have pretty much accepted "Memoirs of a Geisha" as a semifictional memoir in a nonfictional setting.

The most prominent voice against the book in Japan is that of the former geisha Golden thanks most lavishly for providing him with details about life in Gion, the geisha district. Mineko Iwasaki reportedly said that Golden committed inaccuracies and slights, and she complained that he overemphasized the role of sex in the geisha world. Golden's response to her comments was that he wasn't concerned about the small errors, and that he was not surprised by her anger over the issue of sex (attributing it to being too close to the truth to be comfortable).

Another issue for the book in Japan is the translation, which, ironically, strikes readers as unsettlingly authentic. According to those who have read both the English and the Japanese versions, the translation has changed the book because it uses a manner of expression that was unique to geisha society in Kyoto and for which there is no English equivalent. Japanese readers have noted that the translator, Takayoshi Ogawa, appears to be a second author -- there's no way Golden could have known exactly how people in this subculture spoke to each other.

While this might seem to be a successful translation, for Japanese readers it's confusing to read a book by a foreigner that sounds so genuine. On the one hand, they say, it uses specialized language that the original author could never have known, yet it still takes the time to explain things about the culture that are obvious to Japanese readers. As one reader put it, the charm that you feel when you read the book in English, which evokes a feeling of the exotic, is lost in the Japanese version, in which it seems as if Golden is hiding the fact that he is a foreigner.

But the reaction's not all bad. The translator's use of Kyoto dialect and Golden's ability to mask his own foreignness have been the main sources of the small praise the book has garnered in Japan. Reviewers aren't saying this is a groundbreaking novel. They are saying that while it may seem strange for a foreigner to write about this topic, the book really doesn't come across as if it was written by a foreigner.

And like Golden's Western audience, Japanese readers have been impressed by his detailed accounts of feminine customs and traditions. Natsuyo Yukawa, a 30-year-old Japanese teacher and student of the tea ceremony, says she was shocked by some parts of the novel -- particularly an exam that establishes the virginity of two girls -- and that she learned new (and, let's hope, accurate) things from Golden's book that she never knew about geishas. Still, she admits that the only reason she read the book was that she heard about how famous it is. Otherwise, she says, "in the bookstore, another book might have seemed more interesting."

So for now, heaps of unsold copies of "Sayuri" are gathering dust, towering over diminishing piles of more successful books. One of these -- the country's biggest bestseller since World War II -- focuses on an issue that's much more relevant. With its simple but inspiring message, "Gotai Fumanzoku" ("Nobody's Perfect"), the autobiography of a 24-year-old Japanese man born with no arms and legs, has sold 4.5 million copies since its release in 1998. In the words of its author, Hirotada Ototake: "You don't have to be born perfect to be happy." That this book is striking such a chord reflects a growing appreciation of the value of outsiders in Japan's homogeneous society.

Meantime, plenty of gaijin (foreigners in Japan) are still lapping up the exotic angle. A trip to the Japanese-English bookstore in Roppongi revealed heaps of the Japanese translation of Golden's novel up front, but when the clerk went looking for the English version at the back of the store, he came back empty-handed. Sold out.

Jennifer Hanawald is a writer and editor living in Japan