The hypocrisy of America's marijuana laws is highlighted by the glamorous singer's non-arrest after she's found with a half-ounce of pot in an airport. 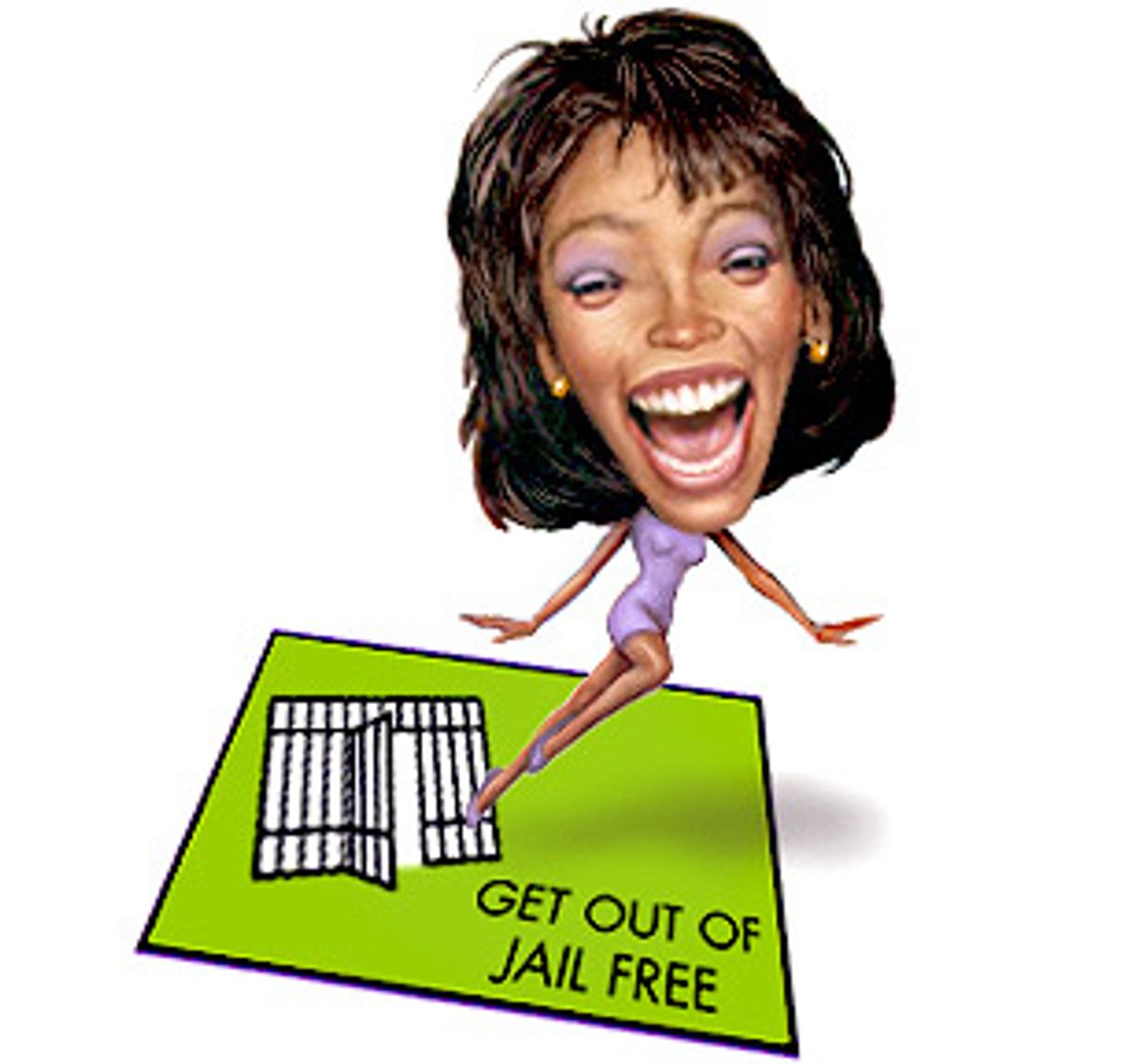 Just why security guards at Keahole Airport in Kona, Hawaii, let singer Whitney Houston board a plane after discovering 15.2 grams of marijuana in her bag in January remains for them to know and us to find out. Just as unclear, Hawaiian law enforcement officials are belatedly telling us, is the final disposition of her case. But no matter what ends up happening to Houston, the incident points up the absurd inconsistency of America's laws, attitudes and rhetoric about marijuana.

When APBNews reported on April 13 that Hawaii prosecutors had decided not to press charges against Houston because airport security guards, as private employees, did not have the authority to detain passengers, it looked suspiciously like a rampant case of favoritism. Starstruck security guards giving a free pass to a celebrity caught red-handed with half an ounce of weed. It wasn't until after months of media coverage that the state's Office of the Prosecuting Attorney felt impelled to issue a press release: Last week it stated that "it has been incorrectly reported that a decision has been made not to prosecute Ms. Houston." Now her fate seemed to hang on whether or not a P.R.-conscious prosecutor's office decided she needed to be made an example of.

As has been widely reported, Houston and her husband, singer Bobby Brown, were going through a security checkpoint in January, when a guard found and seized the marijuana. Houston and Brown left the bag behind and boarded their flight to San Francisco, despite reported attempts by security guards to detain them. Security guards called local police, but none were on the premises and it took a long time -- perhaps as long as a half hour -- for them to arrive. When they did, the plane was taxiing down the runway. Authorities allowed it to take off.

Why Houston was allowed to board the plane after marijuana was found in her bag, and why the plane was allowed to take off even after local police had been called to the scene, are questions that are entangled in a confusing web of jurisdictional, policy and legal issues. The confusion is not dispelled by the conflicting, and apparently inaccurate, statements Hawaiian authorities have issued about the incident.

All inquiries to Keahole Airport security were referred to Marilyn Kali, a public affairs officer for the Department of Transportation, who said that Houston was going through the metal detector "when the agricultural inspector saw something that was organic in the bag and requested a further search ... because you can't take agricultural products to the mainland from Hawaii. They asked to look at her purse, she gave it to them and she left."

Kali said that security then called the police, but "the closest police are about a half hour away" and by the time they arrived, the plane was already taxiing. Asked why they didn't delay the plane in order to wait for the police to arrive, Kali replied, "That I don't know." After a pause, she ventured a guess: Because "they knew who the person was?"

Kali also stated that the guards who discovered the drugs were not hired by the state, but by Aloha Airlines and United Airlines, and, as such, did not have the authority to detain passengers: "They are just there to screen them." If they discover something, Kali said, "then there is another security force that can actually detain them if necessary." That security force was "aware of it, but I don't know why they chose not to detain her," even though the police had been called.

Buck Donham, public information officer for the Hawaii County Police Department, gives a slightly different version of what happened. According to Donham, Houston was going through the metal detectors when the X-ray machine detected an unidentifiable item in her bag. Security officers (not agricultural inspectors) asked if they could search the bag, and found the marijuana. Houston then left the bag behind and boarded her plane. Donham stated that the guards were hired by the state (giving them the authority to seize the drugs and call the police), and confirmed that no police officers were present at the airport at the time. The plane was not held after the arrival of police, Donham said, because possession of 15.2 grams of marijuana "only constitutes a petty misdemeanor," carrying a maximum fine of $1,000 and/or a maximum jail sentence of 30 days.

Passing over the minor discrepancies in their accounts (Kali appears to have erred by saying that the guards were doing an agricultural inspection, Donham by asserting that they were hired by the state), both officials essentially explain the incident by saying that the security guards who found the marijuana didn't have the right to detain her, let alone arrest her, and that mere logistics (the fact that police weren't on the premises) prevented her from being arrested. In effect, they're saying that she escaped by falling through the cracks -- implicitly arguing that the same thing could happen to anyone.

Allen St. Pierre, executive director of the National Organization for the Reform of Marijuana Laws Foundation (NORML), scoffed at the notion that Houston received typical treatment. "If this were a pimple-faced Deadhead, a Phish kind of guy, the prototypical marijuana user, and he was a first-time offender, 20 years old, and the same scenario happened in Hawaii, he would have been arrested, he would be searched," St. Pierre said. "They would have posted bond. He would have had to get a lawyer. Then, of course, he would have to agree to come back for a hearing." Furthermore, according to St. Pierre, people who try to evade airport security "usually face secondary or tertiary charges. [Houston] avoided all of that."

Todd Eddins, a senior felony trial attorney in the public defender's office in Honolulu, said that while he found it hard to believe there were no police officers on the premises, he thought it was possible that screeners might not have the authority to arrest a passenger carrying contraband. But, he added, "One would think that they would have some guidelines" for dealing with that situation until the police arrive.

"I tell you what," says Eddins on reflection, "If she did this in Honolulu she would have been snagged right away, because there are cops all over the place ... My guess is she would have never got on the plane."

Joseph McNamara, a research fellow at the Hoover Institution and retired police chief of San Jose who is an outspoken opponent of American drug policy, was skeptical about claims that the security guards didn't have the right to detain Houston and that there were no police available. "The Supreme Court has ruled that you do not have Fourth Amendment rights of privacy when you go through airport security, you waive them in the interest of airline security," McNamara said. "The security people can't make an arrest. They don't have peace officer status, they are civilian airline employees. They notify the police. And every major airport in the U.S. has major police presence."

McNamara said he found it hard to believe that there were no police in the Kona airport. "Some years ago the Hawaii police were criticized for being overly zealous in tracking and watching criminals and forcing them to get back on planes. Hawaii is one of the strictest states on drugs."

Of the Houston case, McNamara said, "What happens time and time again in the drug war is that big shots are treated differently from other people. Ordinarily you are subject to mandatory sentence. This goes on all the time with relatives of congressmen and senators where rules that are mandatory for others don't seem to apply. It happens to some black kid in the inner city, he gets life in the slammer."

If McNamara and St. Pierre are right that the typical marijuana user, if caught in Houston's situation, would not have benefited from the same legal wiggle-room that allowed the glamorous singer to board the plane, it's hard not to conclude that celebrity favoritism was at play. But even if St. Pierre is wrong, Houston's case -- and our reaction to it -- reveals the blatant double standard that applies to marijuana in the United States. Houston, so far, has gone completely unpunished for an alleged offense that, in a virulently anti-marijuana state like Texas, might well have earned her a prison term.

Of course, everyone knows that marijuana laws vary from state to state and city to city. But this inconsistency makes a mockery of federal pronouncements about the drug. The disconnect between pious official moralizing about marijuana and the wildly uneven enforcement of the laws is a subject nobody likes to talk about, but it is a scandal. As thousands of people languish in jails and prisons across America, serving long sentences for nothing more than simple possession of marijuana, it offends the sense of fairness that others are let off with a slap on the wrist or no punishment at all.

The United States has to either put its money where its tough-talking mouth is, or its mouth where its money is, on marijuana. Until the nation implements a fairer and more uniform criminal policy toward marijuana, whether as harsh as Texas or as apparently lax as places like the San Francisco Bay Area, we will continue to be enraged when people like Whitney Houston walk -- and enraged for different reasons when they don't.