Our semi-sterile lives may be too much of a good thing. Now scientists are inventing "dirty" therapies to remedy our dangerous cleanliness. Second of two parts. 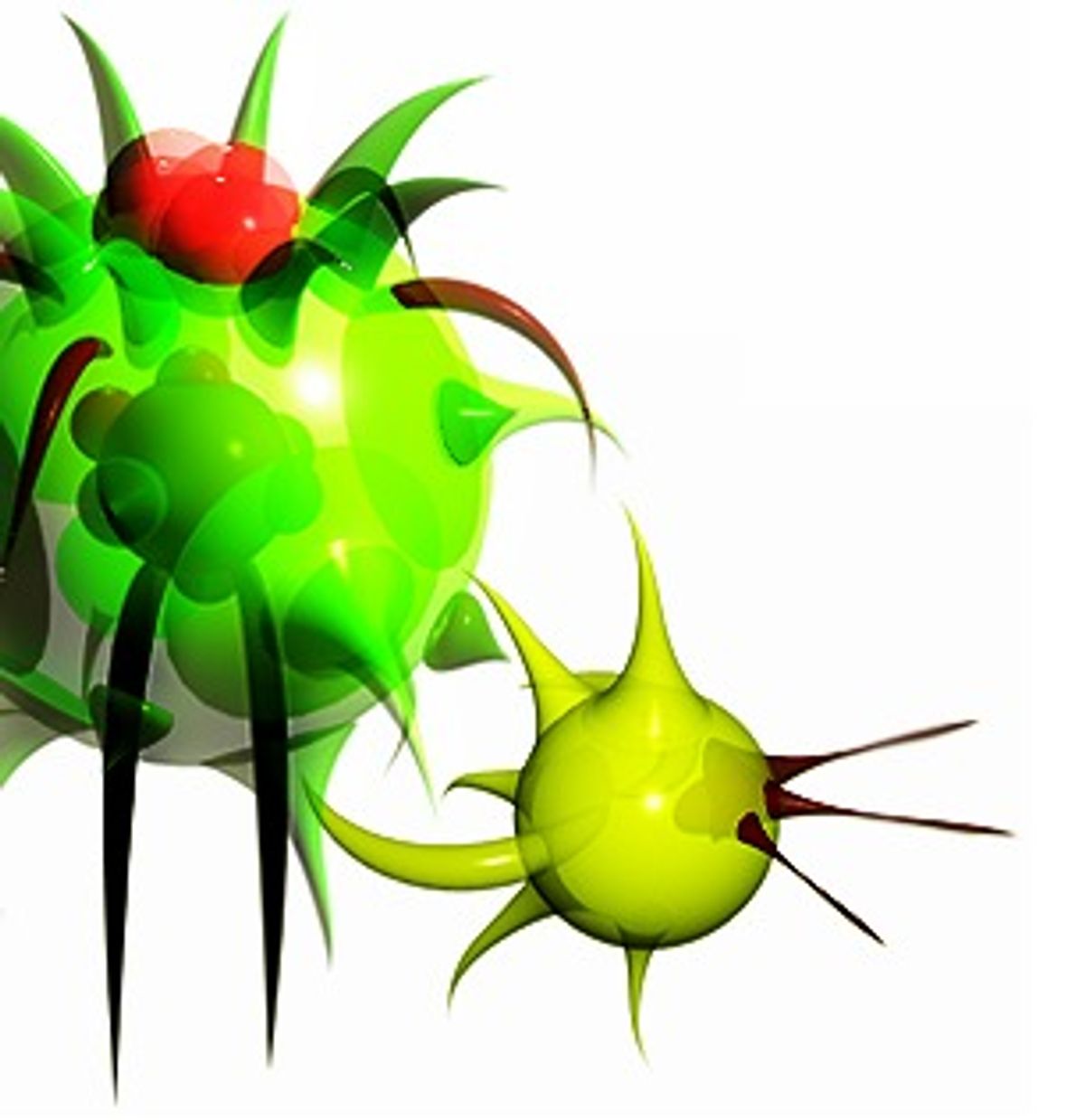 Through vaccination, sanitation and antibiotics, medicine has beaten back most of the childhood diseases that have sickened and killed so many children throughout history. We can't give up that achievement, but it may turn out that we've overdone it a little.

At least that's the opinion of the proponents of the hygiene hypothesis. Led by a group of British immunologists, these scientists postulate that our immune systems are not encountering the same kinds of challenges they have encountered in millennia past. We evolved to cope with dirt and germs, not soap and ethyl alcohol. As a result, our immune systems may be developing differently now and becoming overly touchy about allergens that we'd prefer they ignored.

As evidence the scientists point to a number of disturbing trends in developed countries: Allergies are booming, the asthma rate has doubled since 1988 and diseases like inflammatory bowel disease are on the rise.

To date, much of medicine's attack on asthma and allergies has been directed at whatever substances the immune system takes a dislike to -- environmental triggers like pollen, mold, dust mites and cockroach effluvia. If you can't get rid of allergies, it makes sense to get rid of the allergens. But if we could get the immune system to see reason, that would be even better. (I envision the ad campaign now, with shots of beautiful young people romping through fields of goldenrod, their arms full of kittens while a family of dust mites looks on with fond smiles.)

When British scientists looked at data suggesting that too much cleanliness led to sniffling, wheezing kids, they wondered if maybe the children weren't getting sick often enough. Could it be that early childhood infections help prime the immune system?

But this possibility didn't seem to hold up when looking at American inner-city kids, who have high rates of childhood infections and very high rates of asthma.

Dr. Graham Rook, an immunologist at University College, London, and one of the most enthusiastic proponents of the hygiene hypothesis, surmises that the immune system benefits from exposure to mycobacteria, a family of bacteria species that live primarily in soil and fresh water. Mycobacteria don't live in the human body, so grubbing around in the dirt is the best way to meet them. Most city kids don't see much soil, and what they do see outside is less than inviting.

"If in the course of everyday life we don't meet enough bacteria," Rook told New Scientist, "we're just going to have to inject them ourselves." Just such a method was used in a recent study of Japanese kids, who had been given a tuberculosis vaccination consisting of a weakened form of T.B. mycobacteria. Results showed that they had a much lower rate of allergies and asthma.

Similar studies are underway regarding the treatment of asthma. Rook is among the researchers conducting studies to see if inhaling or injecting mycobacteria can prevent asthma attacks. Preliminary results suggest that the immune system can be at least partly reprogrammed in adulthood. Professor Tony Basten, director of the Centenary Institute of Cancer Medicine and Cell Biology in Sydney, Australia, envisions a future vaccine, to be given to children with a family history of asthma, that would contain genes from dust mites.

If you dislike the idea of inhaling soil bacteria or being shot full of dust mites, how does worm therapy strike you?

In what at first might sound like a completely daffy line of research, investigators at the University of Iowa have been giving volunteers with inflammatory bowel disease drinks laced with the eggs of parasitic worms.

Dr. Joel Weinstock, a parasitologist and director of the Center for Digestive Diseases at U.I., who is the lead researcher in this study, describes how the history of Crohn's disease, one form of IBD (the other is ulcerative colitis), led investigators to this strange therapy.

Crohn's disease is a chronic inflammation of the intestines. It hurts like crazy and causes diarrhea, bleeding and fevers. Children with Crohn's often don't grow as tall as they otherwise might because it interferes with uptake of nutrients. It is treated with only partial success with a variety of drugs; sometimes parts of the bowel are surgically removed, but this treatment isn't a cure.

Crohn's was recognized as a disease only in the 1930s, Weinstock notes. "The first cases were reported in New York City in well-to-do Jewish families in young children. Gradually people became aware that there was Crohn's disease in whites who were not Jewish, though at a much lower frequency." By the 1950s, the disease was becoming more common, particularly in northern states. It was seen in cities, but not in rural areas. The same patterns held true in Europe.

Before the 1970s, Weinstock says, IBD was commonly viewed as a disease that afflicted only white people. "African-Americans would never get it, and if you saw a case you could write it up [for publication]. But then we began to see lots of cases by the 1970s in African-Americans, which suggested that the epidemiology of this disease has been developing, evolving and spreading."

The U.S. North-South gradient is no longer evident, Weinstock says, because people in the South are now getting it. What's more, "Israel doesn't have a high rate -- it's intermediate -- but the Arab kids don't have it." And rates are "epidemic" in Japan and South Korea. Explains Weinstock: "What's unique about these countries? They're industrializing. They're becoming wealthy." The answer thus seems to lie not in genetics but in a changing environment.

Obviously, hundreds of things change as a country becomes wealthier, but Weinstock's money is on cleanliness (too much of it) and specifically worms (not enough of them).

Humans, Weinstock notes, "traditionally evolved to live more like in the underdeveloped countries, closer to the soil, closer to our animals. We didn't evolve as creatures that live in sterile rooms, eating sterile food, with our children playing in plastic playgrounds at the mall, playing with animals that have been dewormed."

Kids, in fact, used to have worms all the time, too: pinworms, whipworms, roundworms. "If you look at the public health data, up until the 1930s most children had these worms," Weinstock says. "Of children between the ages of 3 and 12, 70 percent had it [pinworms and trichuras] in their [gastrointestinal] tract at any one time. It's the same in undeveloped countries today."

Of the group of worms called helminths, Weinstock says, "if you just trace the decline of helminths, you see a direct inverse correlation: You see the rise of IBD -- Crohn's disease. In any society where you're getting rid of worms, you can see IBD emerging."

Tests in mice showed that when they were infected with helminths, they were protected from experimentally induced IBD. Excited by this finding, the Iowa team got permission to work with a few human volunteers. They found a "very nice helminth," Trichuras suis, the pig whipworm, which normally lives in pigs and doesn't reach adulthood when it's put in humans. And "it can't be spread to your children." The team produced a line of helminths that was pathogen-free and gave six volunteers with IBD a drink containing microscopic helminth eggs. "We picked patients who were resistant to all forms of treatments," Weinstock says.

To the researchers' delight, all six went into remission. But they weren't cured -- after a few months they all relapsed, presumably because the worms were gone. With an additional dose of worm eggs, things improved again: Some of the patients have been in remission for up to a year with doses every three weeks.

"Will this last forever?" Weinstock asks, warning, "It could be wishful thinking." He thinks the chance that it's a case of the placebo effect isn't high because the volunteers hadn't responded to other treatments. The investigators are now embarking on a double-blind study with 65 patients.

If further studies show that helminth therapy is effective, what will it mean? It's possible that some organisms we find despicable are not that harmful. "They may actually be important for our optimal health and we [may] need exposure to them because of our nature," Weinstock says. "We now live in a unique environment that the human race has never lived in in the history of man. Large segments of the population are living in near sterility -- is that healthy? Maybe we went too far."

Other researchers are poised to jump into the ballgame. The National Multiple Sclerosis Society is funding a pilot study to look at the relationship between the presence of intestinal parasites and the presence of a multiple-sclerosis-like syndrome in mice.

Although the immune system still has its mysteries, the idea is gaining strength that the young immune system needs to encounter certain basic challenges to develop normally.

Will the germ-phobic masses accept treatments that involve breathing bacteria or drinking worm eggs? Sure, says Weinstock. "Patients are not that dumb!" Helminth worms are benign compared with some of the medications prescribed for IBD and Crohn's. (Corticosteroids, for instance, "are bad news.") People adapted quickly to the idea of vaccinations, which entail swallowing or injecting viruses. "We've gotten lots of e-mails and letters from people who've heard about our research," Weinstock says. "There are a lot of very sick people who would like a wonder drug -- yesterday."

If these therapies turn out to be effective, there are ways to make them more acceptable and less risky. Many vaccines consist of killed viruses, fragments of viruses or debilitated viruses. The Iowa team's use of pig whipworms instead of human whipworms could be just the beginning. Maybe just bits of pig whipworms would work as well, as might a piece of pig whipworm DNA or pig whipworm robots.

When supporters of the hygiene hypothesis are asked for child-rearing advice, however, they get nervous. The thought that we'd all stop vaccinating our kids and start encouraging them to eat out of dumpsters clearly haunts them. But maybe everything need not and should not be so antibacterial; maybe we need to start making the tedious distinctions between good and bad germs and not simply try to kill all of them.

E. coli in general is good for us; E. coli 0157:H7 is very bad for us. Parents need to use common sense: Let a kid play in the dirt, but don't let a kid play with a raw chicken in the dirt.

This is undoubtedly what Tony Basten, of Sydney's Centenary Institute, meant when he told the Sydney Morning Herald that children should be allowed to be outside "eating dirt ... playing with friends, picking their noses, and enjoying the sandpit," if only because "it's a good way to grow up."

Does all this mean that germs are our friends? Hah! Some friends. It's more complicated than that: Germs are family.