The lord of game developers

Peter Molyneux originated the "god game"; his newest production might be his greatest act of creation yet. 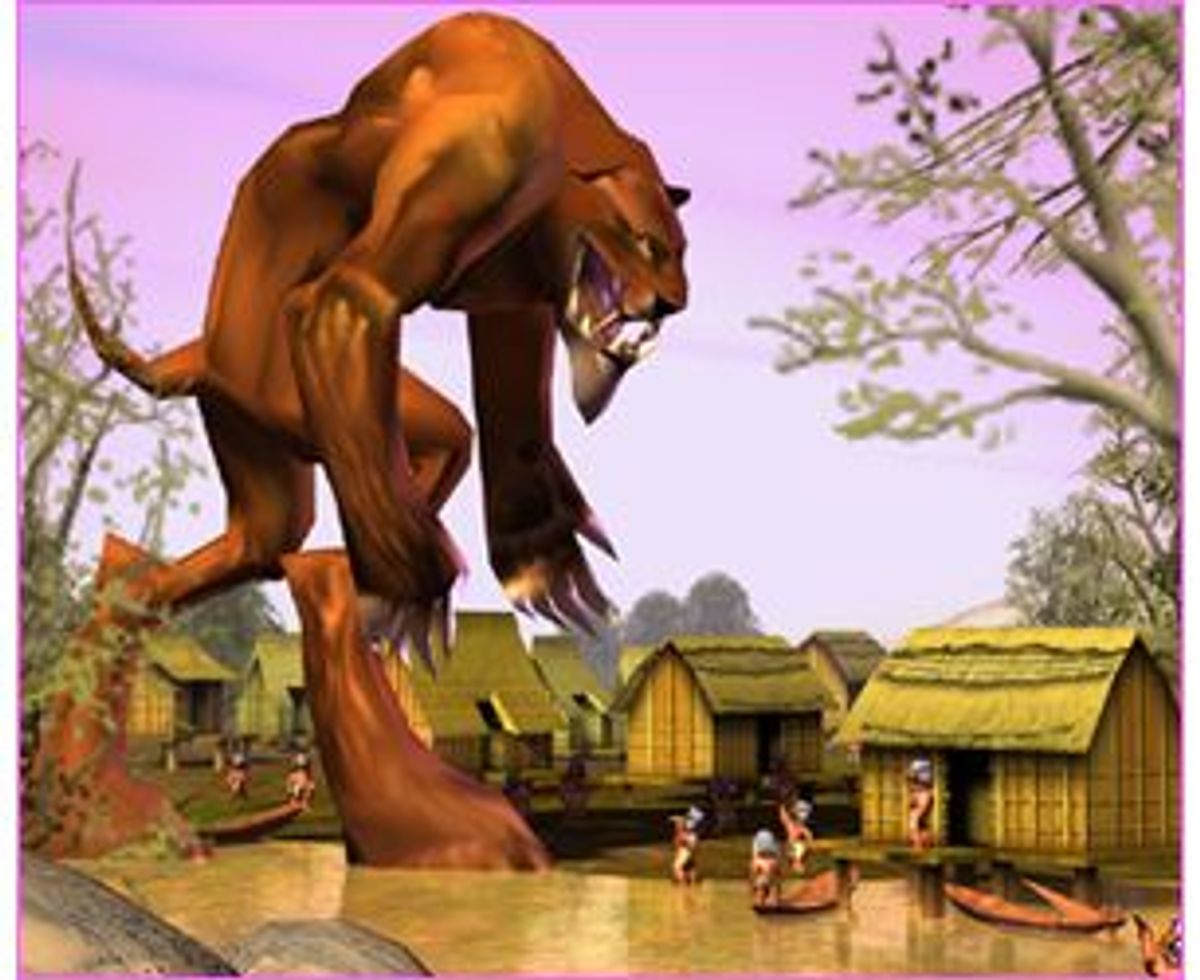 One day, a precocious (if somewhat peculiar) English lad mercilessly prodded an anthill with a stick, scattering hundreds of its terrified inhabitants in all directions. But he soon bored of such random ant anarchy, and began to seek satisfaction in fostering ant order: If he placed a piece of candy near the hill, for example, he learned the ants would organize themselves in formations to claim the prize.

Years later, now an adult, Peter Molyneux stands on the podium in the San Jose Civic Auditorium, a keynote speaker at the Game Developers Conference held in March. He's about to give the first public demonstration of his keenly anticipated new game, Black and White, a game he describes as the summation of those childhood experiences and everything he's learned since, in a career of breakthrough game design. The audience of game developers is buzzing. Molyneux's work has earned him a place among Englands leading pop visionaries. Indeed, in a 1997 editorial in the Guardian, Prime Minister Tony Blair himself named Bullfrog Productions, Molyneuxs original game company, among the exemplars of his new Britain.

"I'm very, very nervous about showing this," Molyneux admits,
three giant computer display screens looming behind him.
In a medium that has become, in the years since he first entered it, a savagely competitive, multi-billion dollar industry,
with budgets fast approaching those of feature films, his trepidation is understandable. As he ruefully quips to the assembled game developers -- most of them, like the industry's primary market, in their 20s or early 30s -- "You all watch MTV, but MTV has destroyed your minds completely -- [now] I have 10 seconds to impress you."

But such worries swiftly prove unfounded: Almost immediately,
the first of many cheers roars through the auditorium as Molyneux begins to demonstrate the features of Black and White, a real-time strategy game in which the player is both God and Titan, with a lush kingdom to command.

As the acclaim rolls on, one gets the impression that Black
and White may be, after all, the best game he's ever created, synthesizing the strongest features of his previous games, but writ large with the computing power to fully express the ideas he's always had for them.

And after years of breathless coverage by the game press, and a release date pushed back time and again, it could come none too soon. "Although it seems like the development of Black and White has taken a long time, we always knew that it was going to take over two years," he later reassures me by e-mail from Guilford, home
to Lionhead Studios, his new design company. "It's just that I can't help talking about the game I'm working on from the very outset!"

With his perfectionist bent and inclination for godlike perspective, Molyneux is surely the Stanley Kubrick of computer game design. In his own medium, his status ranks as high as the late director's in his. Rob Pardo, lead designer for Blizzard Entertainment's upcoming WarCraft III, enthuses, "All his games have been extremely innovative in the strategy genre and [he's] one of the rare game-design visionaries who is unafraid to attempt very new game mechanics ... There are very few people in the game industry that are as innovative as he is."

Will Wright, the mastermind behind the SimCity series of games, says, "Peter is one of the few designers that I know who considers both the ethical/moralistic issues involved in artificial microworlds and also how to fully leverage the imagination of the player." Wright's games, from the classic SimCity to his current bestseller The Sims, are thematic companions to Molyneux's titles.

"I think Peter and I both specialize in guilt-driven games. You are given a little world to either nurture or ravage during the course of play. I've always been impressed by Peter's ability to make me feel guilty and empathize with the computer characters if I choose to destroy their world. I ended up designing a much deeper set of failure states in The Sims [death, for instance] based on my experiences in Peter's worlds."

Molyneux has been building such worlds for well over a decade. In the late '80s, under the aegis of Bullfrog, a company he founded with the money earned from a database program he coded for the Commodore Amiga, he created Populous, a game that put the player in the unique position of being responsible for an entire people's welfare. The interface made it seem as if you were viewing them and their tiny homes from Olympian heights, and fittingly, you had the power to flood them out, or immolate them in a volcanic eruption, just by a few taps of the keyboard. It sold over 4 million copies, creating an entirely new sub-genre in the process: the "god game."

One of Populous' follow-ups, 1990's Powermonger, a game of conquest in which a player not only commands an army, but the inhabitants in the towns, farms, and foundries which keep it supplied, is the patriarch to the resource-management, real-time strategy game -- now best represented by titles like Blizzard's Warcraft and Starcraft.

It also featured Molyneux's uniquely elegant, witty solutions for conveying essential game information. You could gauge the wisdom of your strategies, for example, by the tone of your generals' responses when you gave them their marching orders. Send them into a battle where victory was almost certain, and they'd answer with a hearty "YEAH!" But order them into foolhardy conflicts where Agincourt-like defeat was guaranteed, and their "yeah" was muttered and surly.

His last game, 1997's Dungeon Keeper, incorporated resource management with a refreshingly ironic twist on another genre: After nearly two decades of fantasy role-playing gamers looting infinite numbers of underground keeps, Molyneux's game made you the dungeon's put-upon business manager, trying to rid the place of these pesky elves and warriors, while having to handle labor disputes among your goblins, trolls and other dungeon personnel.

Molyneux characterizes the uniting theme of these titles with typical understatement -- "Every single game I've done has a little person in it" -- but in aggregate, they succeed at something far more ambitious: the portrayal of vast, complex social systems within a coherent visual field, teaching us to think of them as self-perpetuating, self-contained universes, existing apart from our awareness of them and evolving in ways we can hardly anticipate.

At roughly the same time that chaos theory was coming into academic vogue, Molyneux made this conception of the world engagingly lucid to anyone willing to try his games. Playing Powermonger, I would sometimes let the game run unattended, and return hours later to find my citizenry near extinction, or somehow, all migrated from their home island down to another at the opposite end of the map.

But Molyneux is the first to criticize the shortcomings of his past games: Populous had no story, he grouses, and the control interfaces for Powermonger and Dungeon Keeper were far too intricate to master. Black and White, he hopes, will ameliorate these deficits, while creating a kind of ultimate role-playing strategy game, in which the player is asked to convincingly become a god, lording it over a lush kingdom and a Titan, a skyscraper-sized creature who is both your pet and your physical emissary to the world.

Due for a major multi-platform (including Linux) release in late September, according to Molyneux, Black and White has basically taken him a lifetime of design experience to create. Raised by parents who owned a toy shop, he tells me, "I have always loved being involved in the design of all games. From board games to computer games -- I can't remember a time when I wasn't fascinated by them."

As to game designers he draws the most inspiration from, Molyneux names Shigeru Miyamoto, creator of console classics like Mario and Zelda. "Those products are what all computer designers should aspire to. The sheer inventiveness of his designs, attention to detail and ability to surprise and enchant the gameplayer are unparalleled."

He draws from literary world-builders like J.R.R. Tolkien and Isaac Asimov, and in film, a mix of directors who seem to mirror his own populist and mordant sensibilities, including Steven Spielberg, Quentin Tarantino and "the Coen Brothers, for taking very dark subject matter and making it humorous, Tim Burton for creating sheer visual beauty ... I think if you enjoy their works it has to influence you even at a very subtle level."

But while he admires them, he's not entirely certain his particular skills would translate to film. "I do find the idea of working in other mediums interesting but ... there is a very strong argument to stick with what you know."

In Black and White, the appearance of your kingdom and your Titan will literally change according to the moral tenor of your behavior in the game: For every act of cruelty you commit, they begin to take on a dark, ominous hue; for every act of kindness, their colors grow more vivid, textures more luxuriant.

It will evolve, in effect, into a visual representation of who you really are. With conceptual ambitions as provocative as this, Black and White has the potential to be that long-sought mythic creature: a game that is also a genuine work of art.

But are computer games an art form at all? Molyneux cautiously hazards: "I've been asked this question many times and I always end up defining art -- if you [define it] as something that produces a reaction that changes the way people think about the world, then some games do achieve this. But I would say that 99 percent of games are as much an art form as 'Friends,' the TV series."

That Molyneux's upcoming game might gain a firm finger hold on that 1 percent outcropping seems likely. At the very least, initial glimpses suggest an impressive fulfillment for a fascination first evoked by an ant colony boiling under a child's feet.

"I think with any kid, if you give them a stick and an ants' nest," he tells me, "they all do the same sort of thing. It's just that, in my case, I never moved on from those 12-year-old feelings -- which is pretty disastrous for the rest of my life, but has been great for designing games." And for Molyneux, his own reward immunizes him from any possible negative critical reaction to the finished work. "Seeing the picture in my mind and seeing it come to life on the computer screen -- there is nothing like that feeling."