"Up at the Villa"

The new film from the folks who gave us "Angels and Insects" is strictly "Minor Piece Theatre." 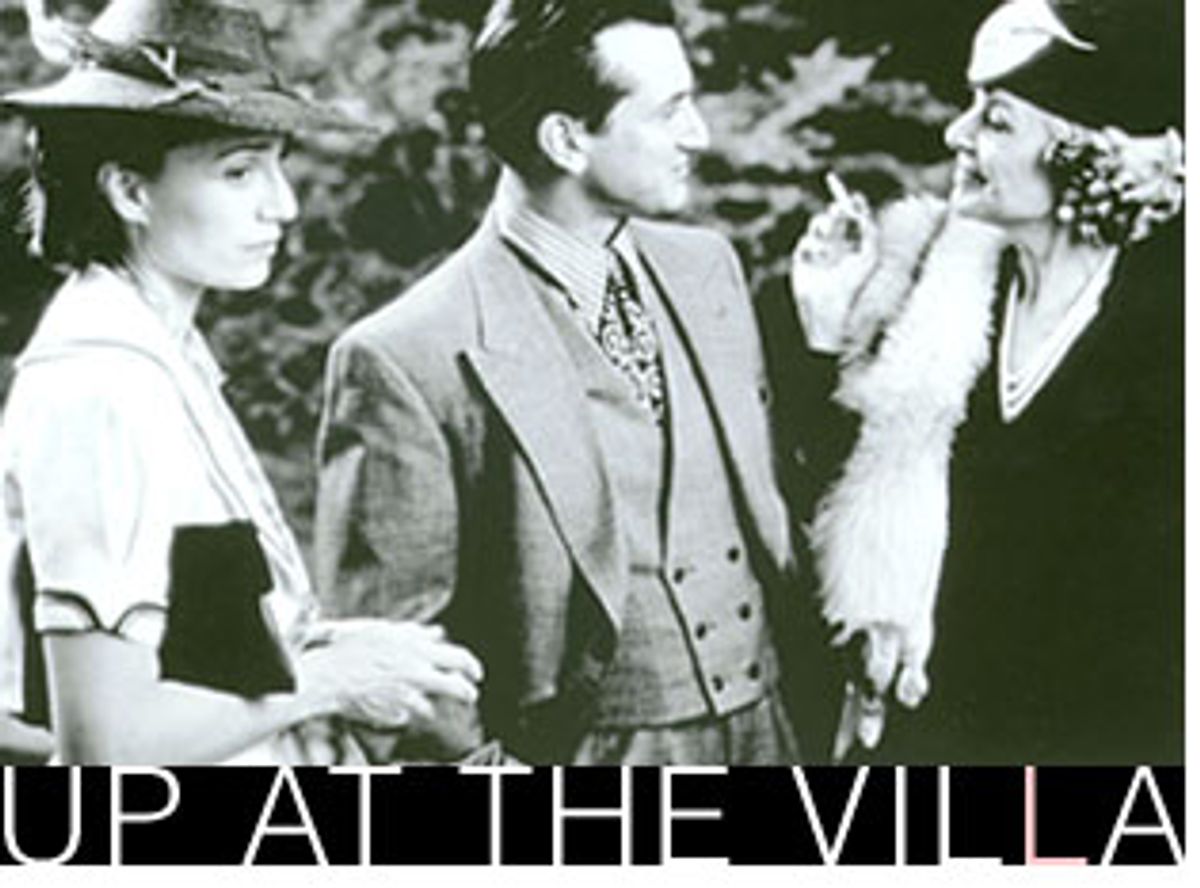 "Up at the Villa" adorns W. Somerset Maugham's deft, slender 1940 novella with the antique marvels of Florence and Siena, Italy -- and burdens it with intimations of the fascist apocalypse. The material can't stand the weight. Despite the prestigious talents involved, this is strictly "Minor Piece Theatre."

Introducing the picture at the San Francisco International Film Festival, the movie's director, Philip Haas, said that it grew directly out of his 1995 screen version of A.S. Byatt's "Angels and Insects." He and his screenwriter wife, Belinda, enjoyed working with Kristin Scott Thomas on that film, and thought the heroine of Maugham's novella would be "perfect" for her. Actually, they already did perfect, in "Angels and Insects"; this is a period piece as well, but this time out it's the past imperfect.

In "Up at the Villa," Scott Thomas plays a well-bred but hard-up British widow staying at a lent-out villa in Florence in the late '30s. After a disastrous union with a drunk who died in a car crash, she's determined to marry for stability; she has 48 hours to consider a proposal from an elder statesman (and old friend), James Fox, set to be the governor of Bengal. But in these fateful two days, Sean Penn catches her eye as a sexy American with a roguish charm and a caddish reputation. Disoriented, she gives herself not to Penn but, in an act of kindness -- oh, let's just say a mercy fuck -- to a despairing political refugee from Austria. When this woebegone lad misreads her pitying gesture and returns for more, Scott Thomas lands in a frightful jam. Only Penn can save her.

Despite small changes, such as making Penn's character a Yank, the core story and much of the dialogue are straight out of Maugham. But the Haases add a local fascist potentate (Massino Ghini), who menaces Penn and underlines the complacency of the English and American socialites who think the Munich pact will nullify the fascist threat.

Rather than enrich Scott Thomas' character, the additional heft of the script makes her look wan and silly. Early on, Scott Thomas is bitterly compelling when she explains a nightmare marriage in a monologue direct from Maugham. But having conjured up a woman of tough emotional experience who learned to understand a wanton husband, Scott Thomas reacts to ensuing crises like a dazed and sometimes daffy debutante. Even when she summons up all her courage, she acts like she's playing girl detective.

The presence of a mini-Mussolini in town only accentuates the deficiencies of her -- and the storytellers' -- handling of the refugee. In the novella, too, I thought it callous for the poor foreign boy to function as a tool of the heroine's education. But the effect is worse in the movie, where there's less emotion attached to his plight than to the blood on Penn's face and shirt after fascist jailers pummel him.

Scott Thomas was wonderful in "Angels and Insects," playing a sly feminist in 1860s England capable of hooking a man with her brain. I still chuckle when I recall her saying, "It is my great amusement, thinking." But that whole film was a play on the word "natural"; it was about how hazardous it is to describe as "natural" what actually happens in nature, civilization or the bedroom. Scott Thomas' role set her off beautifully as a natural performer with cunningly channeled gusto. In "Angels and Insects," a pre-modern awareness irradiates every aspect of her face -- she has an appetite for intellectual adventure that's galvanizing and ultimately sexy. Through much of "Up at the Villa" she blanks herself out.

At their best, the Haases are an elegant and lucid filmmaking team. But they're also emotionally muffled. That didn't kill "Angels and Insects," which mounted an iconoclastic view of English country life. It's fatal to "Up at the Villa," which depicts Florence as an emotional hothouse. What's missing is the passionate irony that William Wyler and Bette Davis brought to Maugham's "The Letter."

In "Up at the Villa," dramatic parallels that should pay off instead dribble away. Penn slaps Scott Thomas when he learns of her one-night liaison with the refugee; Fox (an actor who can't be topped for what Maugham called "dignity without arrogance") takes the news like an old-fashioned manly man. But the contrast has no sting.

Even Penn, who's terrific at conveying the play of rough and tender feelings beneath his polished rogue's banter, never fully commands the screen. He comes on like gangbusters only to reiterate a repertoire of feints and challenges. Sometimes Penn can wring a spectrum from a limited palette -- he did just a few months ago in "Sweet and Lowdown" -- but not here. (Jacobi never gets the chance to wear out his welcome in the puny, Haas-invented role of a flamboyant gay Brit expatriate.)

The natural in this movie is Anne Bancroft. As Princess San Ferdinando, an American who married a titled Italian, she embodies Maugham's powerful old bawd to the teeth. It may be worth a ticket to hear her describe a restaurant singer as "full of macaroni and emotion" or to see her flash (in Maugham's words) "one of those quiet, smiling looks of hers in which there was the indulgence of an old rip who has neither forgotten nor repented of her naughty past and at the same time the shrewdness of a woman who knows the world like the palm of her hand and come to the conclusion that no one is any better than he should be." While Scott Thomas is fretting about fate, Bancroft gives lewdness a good name.