My mother the nun

It's true she was a bride of Christ -- just don't ask for details of the marriage. 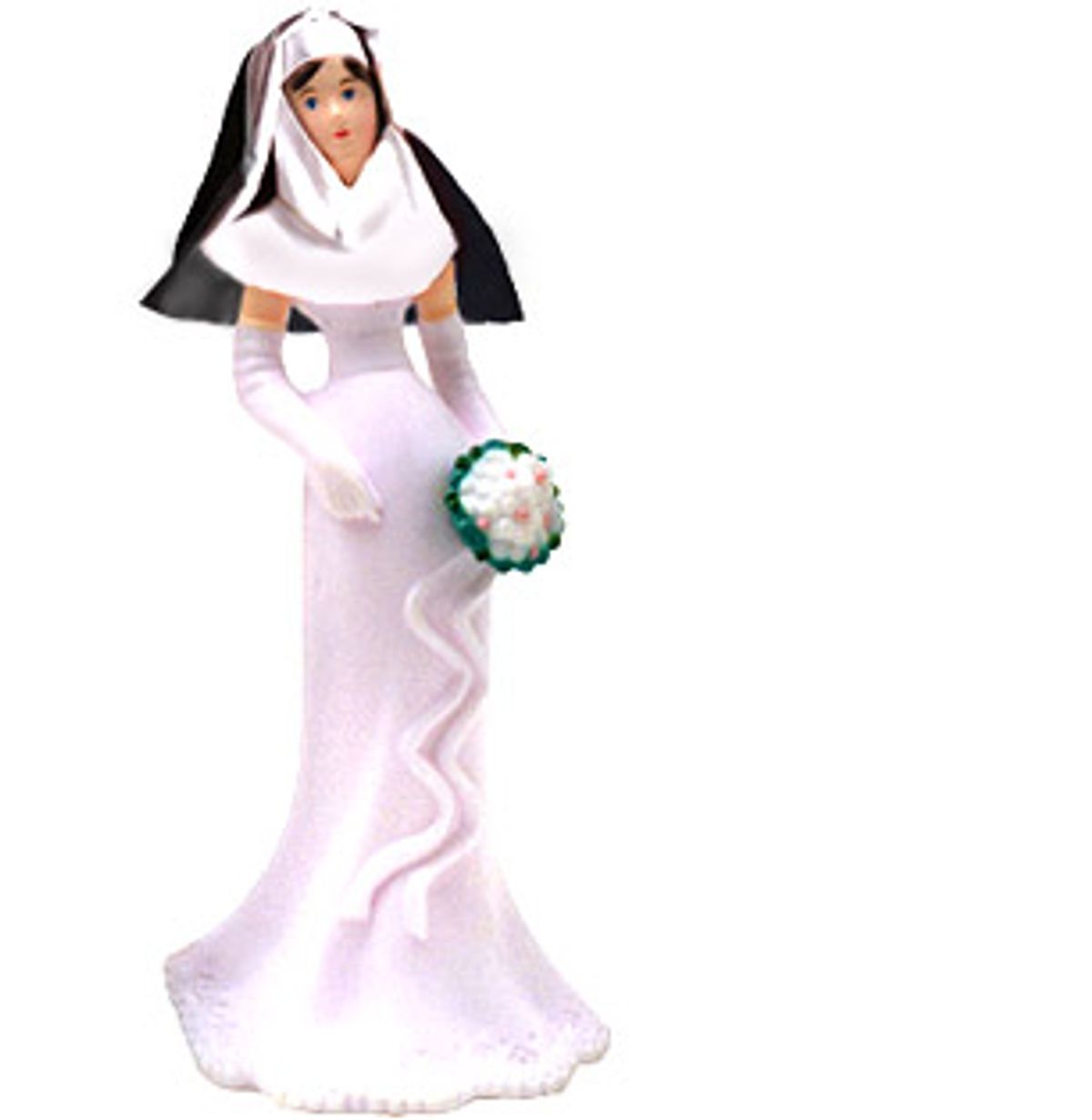 Two weeks after my arrival at Wellesley, I called my mother in tears. "This place is a convent," I said in nearly hysterical sobs.

I could hear the sound of a crinkling potato chip bag and my mother surfing television channels. "It is not a convent," Mom said. "Spare me."

As I listened to my mother chew Ruffles and complain about the leaky roof, I stopped crying. Nothing quite sucked the air out of an argument like your mother trumping you with her former marriage to Christ.

As Mom would proudly tell you, she was a rebel girl in the '50s: She lit up a cigarette on her way to Most Holy Rosary High School every morning and cheated on her Latin final and the Math Regents' exam. She had no plans beyond graduation, which led the nuns to ask her if she had considered a vocation with the Sisters of the Immaculate Heart of Mary. Seeing Jesus as something of a rebel himself, Mom raised the possibility with her parents.

"Over my dead body," her own mother responded. (Although she was a devout Roman Catholic, my grandmother expected to meet her future son-in-law on this earth, in her lifetime.) The foreboding edict was all my wild and crazy mom needed to become a bride of Christ.

During her first few years as Sister M. Magdalaine, my mother taught at Catholic elementary schools in Scranton and Altoona, Pa. In 1961, she arrived at St. Ephrem's in Brooklyn, N.Y., where her floor-length wool habit transformed New York into a city of guaranteed seats on the subway, immediate help with heavy packages and constant, undying respect.

Although my mom stood in line for 11 hours to view Robert Kennedy's casket at St. Patrick's Cathedral, and had a younger brother who was eligible for the draft, her veil tended to separate her and her fellow sisters from the turbulence of those years.

When Pope John XXIII recognized this detachment, he convened the Vatican II Council. Continued under Pope Paul VI, Vatican II ended centuries-old traditions like the Latin liturgy and meat-free Fridays in an effort to make the church more accessible to the general public. With the elimination of the rule that required nuns to wear habits at all times, my mother found herself subject, like every other New Yorker, to leering and groping while she stood on the subway.

"It was like I had a foot in both worlds," Mom explains.

In the years following Vatican II, many nuns would find that they could not live with such conflicting conditions and ask to be released from their perpetual vows. In 1969, during the summer that astronauts landed on the moon and flower children landed in Woodstock, N.Y., my mother concluded her 14-year act of rebellion by returning home.

As a child, I used to listen to my mother tell this story and watch in fascination as jaws dropped -- usually around the word "convent." The swallowing reflex usually disappeared after "14 years." Neighbors, co-workers and bank tellers focused their attention on my mother with an intensity usually reserved for car crashes.

Yet while the slightest mention of Mom's former life sent most people reeling, I thought her cheery recollections of the nunnery sounded as benign and uninspired as a taped tour of Epcot Center. I mean, what about hair shirts? The hiding of convicts? What about Agnes of God?

My earliest inquiries into the untold story of Mom 'n' Jesus were met with a blank stare. "What else is there to know?" she said. "I taught school."

And wore a wimple.

"Oh, and I attended Marywood College for eight summers to earn my bachelor's degree," Mom said. "And then every September, I went back to teaching school."

I thought I'd finally hit pay dirt when my grandmother died and I discovered a shoe box of 30 or so letters from my mother to her parents (or, rather, according to the return addresses, from Sister M. Magdalaine to her parents) under a stack of 10-year-old TV Guides.

"The lilacs outside my window have come into bloom, a welcome sight every morning," the first one read. After reading two more pages of similar Hallmarkian dreck, I noticed it had been written in 1958, while Mom was still a relative newcomer in the novitiate phase. I dug deeper in the pile.

"The school year is winding down. My students are a joy, and I will miss them tremendously," Sister M. Magdalaine exclaimed. Jesus, my mother really did love Christ.

I showed the box to my mother. "How very holy," I said.

"Oh, they read everything we sent. We had to watch what we wrote," Mom said, sorting through her mother's clothes.

"Like in jail?" I asked enthusiastically. "Times of war?"

Mom rolled her eyes and left the room. I saved a TV Guide with a cover story on "Alf" and tossed the letters.

While my search for hidden details originally started as a possible way to appear on "Oprah" or "Sally Jessy Raphakl," I soon saw my mission as a quest to recover missing history. It seemed disturbing that the only thoughts that ran through my mother's mind from age 18 to 32 concerned gardening tips and phonics lessons.

Meanwhile, college view books full of frisbee-tossing, fun-loving female students were arriving in my mailbox. I couldn't understand how silent prayer could seem like a rewarding experience to my mother when she was my age. If Mom wanted to tell the postal clerk that she prostrated herself before Christ and then oh-so-casually ask for a book of stamps, fine, but I was her daughter. I was the living realization of a dream that, for 14 years, she never even considered. What was there to know? Everything.

And then I received my acceptance letter from Wellesley.

Although my choice to attend a women's college in Massachusetts might suggest that I had an affinity for the idea of sisterhood, I never saw myself as following in my mother's footsteps. Mom pledged vows of poverty, chastity and obedience to her Lord and Savior; Wellesley did not mandate such a requirement for graduation.

Yet, like my mother, I encountered dropped jaws and interrupted swallowing reflexes when I announced my intention to go to Wellesley. I started to think that maybe it wasn't the bride of Christ thing that made nuns an endless source of fascination but their decision to live in a community free from the influence of men. Perhaps we were pioneers, my mother and I, and those gasps and stares we faced were ones of admiration! Disbelief! Awe!

Or perhaps these all-women communities are viewed as having great potential for some really kinky shit. (Certainly when I ran into Will, a high school classmate, in the grocery store during my first holiday break, and he asked if I was having a good time at Wellesley, I'm pretty sure he didn't want to know about my astronomy course or the strengths of an all-female classroom; he wanted a tale of hot lesbian sex. Right there, without a doubt, hot lesbian sex in the cereal aisle.)

For her part, my mom has had to grapple with endless comedy sketches and cheesy cable movies that reduce her former vocation to tales of knocked-up sisters and forbidden romps in the confessional booth. Never underestimate the timeless power of naughty servants of God going at it!

The list of campy B-horror flicks or romance films featuring a nun and seduction -- probably a priest or a rugged millworker, too -- is long. For two ends of the spectrum, try "A Nun's Story," in which Audrey Hepburn is forced to resist her attraction to a handsome doctor at the Congo missionary hospital (with its naturally steamy atmosphere) where they both work, and "Shattered Vows," a 1984 made-for-TV feature in which Valerie "Mrs. Eddie Van Halen" Bertinelli is a nun who falls for a priest played by David Morse.

Hard images to project on my mom, a woman who has been happily married for 30 years (to a non-Catholic guy with whom she never exchanged one furtive glance until two years after she left the convent) and has raised two children. But folks still try.

After I graduated from Wellesley, I thought the attention would evaporate. Instead, I handle a steady stream of inquiries -- from friends, neighbors, dry cleaners -- about life at my alma mater. (As in: "I went to Wellesley," followed by "Oh, what was that like?") If I opt for the truth, that was made up of working hard to be able to watch syndicated reruns of "Full House" every evening. That was a high level of excitement generated by a baked potato bar for dinner. That was nothing, to a mortifying degree.

"Oh, it was fine," I'll say with a grin, as my mother's own story -- or lack thereof -- starts to make more sense. Of course, when dealing with perceived fantasies of naked ritual dances and girly pillow fights, one-word replies delivered with a mysterious smile only add to the intrigue. I finally get it.

Recently, feeling depressed and more than a little bitter about my singleness, I called my mother in tears, searching for advice. Where could I find available men? Why did I feel like a spinster at 26?

"What can I tell you?" Mom asked over the crinkling of a potato chip bag. "I was in the convent at your age. It wasn't an issue."

Theresa Rusho is a freelance writer in Boston.