"American Pharaoh: Mayor Richard J. Daley -- His Battle for Chicago and the Nation" by Adam Cohen and Elizabeth Taylor

A big biography tells the full story of the legendary politician, with a sharp focus on his battle to keep the Windy City segregated. 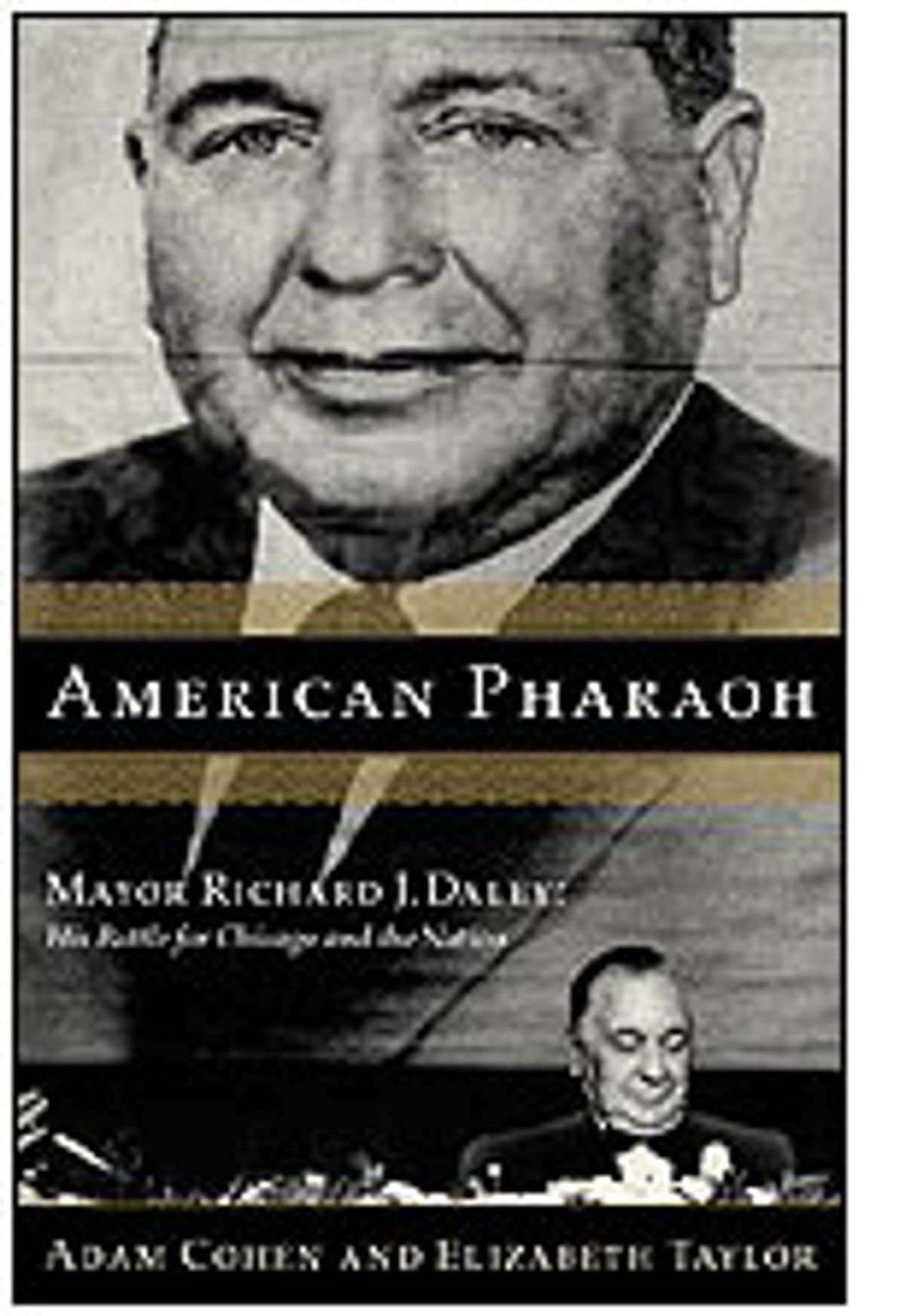 Like former Alabama Gov. George Wallace, Chicago's legendary Mayor Richard J. Daley became a national figure in the 1960s as a symbol of working-class white backlash against the civil rights movement and the student left. Both men embodied 20th century political institutions that were bound for history's scrapheap -- in Daley's case, the patronage-driven urban political machine. And both were Democrats, though the demographics they respectively represented -- disaffected white Southerners and rapidly suburbanizing Northern white ethnics -- became the bedrock constituency of the Reagan revolution and the Republican congressional majority.

Despite the subtitle that Adam Cohen and Elizabeth Taylor have given their engrossing and massively detailed new biography of Daley -- "His Battle for Chicago and the Nation" -- the authors depict a man who was rarely concerned with national politics or with political theory or philosophy. The Daley of "American Pharaoh" is a shrewd manipulator who approaches every issue, every conflict, as either a threat to his power or an opportunity to consolidate it. For all his famous malapropisms ("The policeman is not there to create disorder, the policeman is there to preserve disorder"), Daley was always intensely focused on his prime objective: preserving political power at any cost whatsoever.

He achieved his greatest national fame, and infamy, for defending and even celebrating the almost barbaric violence his police force inflicted on anti-Vietnam War protesters outside the 1968 Democratic National Convention. Ironically enough, Daley personally opposed the war and had privately urged President Lyndon B. Johnson to withdraw from Vietnam. But in Daley's worldview, this stance was perfectly compatible with brutally crushing antiwar demonstrations before a national television audience; he saw both the Vietnam conflict and the New Left that arose to protest it as threats to his authoritarian rule over the Cook County Democratic Party, his personal fiefdom.

Cohen, a senior writer for Time, and Taylor, an editor at the Chicago Tribune, have not quite produced the comprehensive analysis that, to use their phrase, "the most powerful local politician America has ever produced" probably merits. For all its encyclopedic marshaling of fact and anecdote, "American Pharaoh" makes only modest efforts at interpreting Daley's legacy and at situating it in a larger historical context. Nonetheless, it is a vital and necessary work that students of American political history are likely to consult for decades to come.

The authors are more interested in the public achievements and backroom shenanigans of Daley's 21-year mayoralty, which ended only with his death in 1976, than in his notoriously guarded private life. But when they briefly put their subject on the couch, the results are pretty convincing. Daley was born and lived nearly his entire life in the South Side Irish-Catholic neighborhood of Bridgeport, and the authors argue that its hierarchical values -- "discretion, sobriety, plodding hard work, fitting in and a willingness to follow orders" -- became his values and those of the Irish-dominated political machine he eventually inherited.

By the time he had plodded his way to the pinnacle of the vast Cook County Democratic empire in 1953 (two years before he was first elected mayor), he was a 51-year-old father of seven and, as Cohen and Taylor write, "a gregarious loner, acquainted with thousands of people but close to almost none." Readers of "American Pharaoh" will encounter perhaps the clearest explanation ever written of how Daley's highly formalized patronage system actually worked and an interesting discussion of the ways the machine manipulated vote totals.

In this extended and sometimes bewildering chronicle of skirmishes and subterfuges, one central theme finally emerges: Daley's tireless struggle to keep Chicago racially segregated. Doing so always required a delicate balancing act because the Democratic machine depended on black voters almost as much as on white ethnics. Daley gave lip service to racial equality and open housing when the occasion demanded but did his utmost to keep blacks trapped in the South Side and West Side ghettos, where his armies of patronage workers and precinct captains could most easily control them. Cohen and Taylor suggest that he was motivated partly by racism but mostly, as usual, by pragmatism: Integration, Daley feared, could drive whites to the suburbs, unleash unpredictable forces in the black community and destroy the Democratic machine.

Perhaps the centerpiece of "American Pharaoh" is the extensive account of Martin Luther King Jr.'s 1967 open-housing campaign. It was intended to be the civil rights leader's first major foray into the urban North, but King was caught off guard by the vicious mobs of white Chicagoans he met -- worse than anything he had encountered in Mississippi or Alabama, he reported -- and by the astonishing number of black politicians in Daley's pocket. The canny Daley refused to play the villain in King's drama, eventually outwaiting and outwitting him and sending him back to Atlanta with a list of apparent concessions that were fatally vague and unenforceable. The machine had won -- for the time being.

Today, though, the results of the King-Daley clash look far more ambiguous. "I see nothing in this world more dangerous than Negro cities ringed with white suburbs," King warned at the time. James Bevel, a black activist and ally of his, proclaimed, "We will demonstrate in the communities until every white person out there joins the Republican Party." All Daley's power and all the indisputable passion he felt for his broad-shouldered city couldn't confound those prophecies.