Flesh and blood and DNA

A geneticist sparks outrage with a project to help African-Americans trace their family roots. 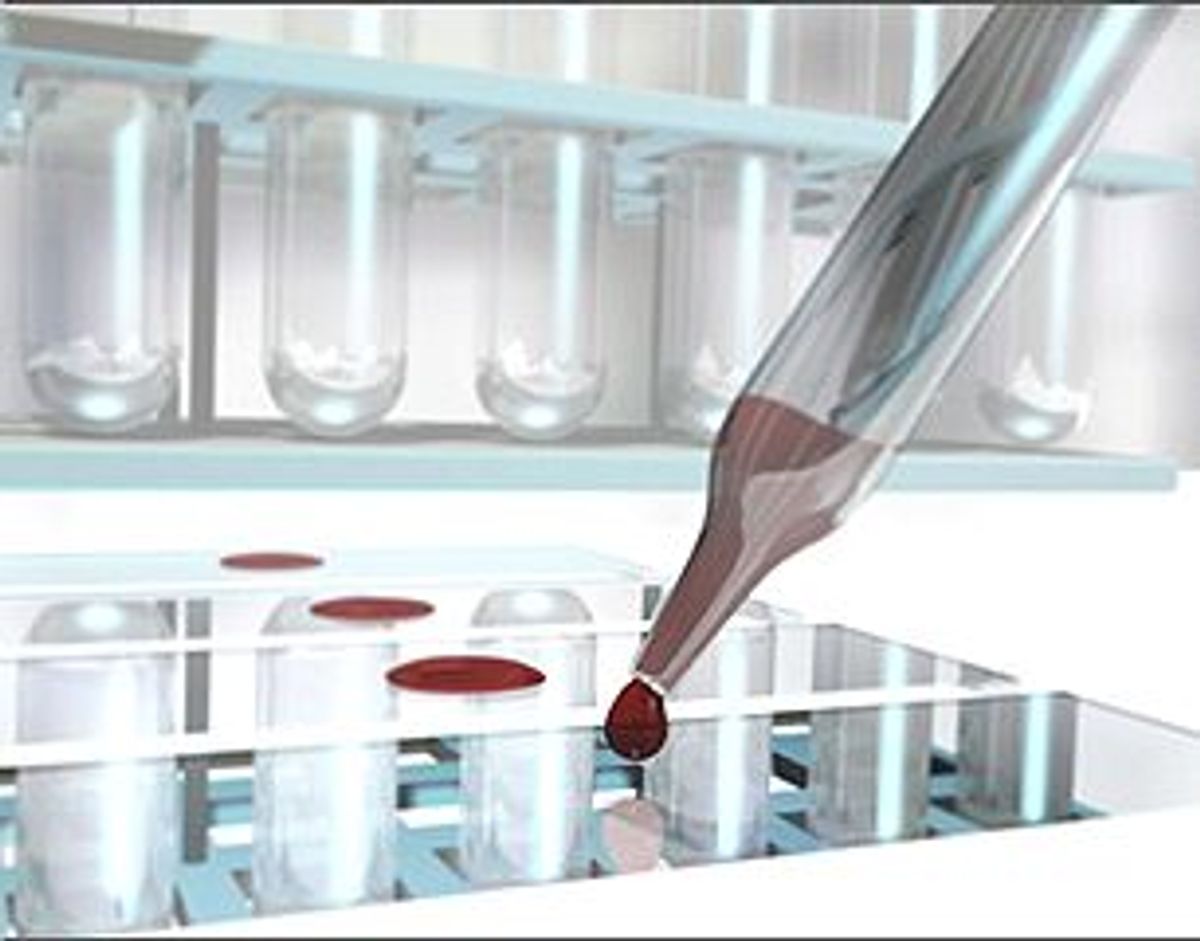 A Howard University geneticist has created a sensation by announcing he'll soon offer African-Americans a chance to use their DNA to find ancestors in Africa. Ripped from the motherland by slavery, reconnected by popular science -- it seems too good to be true. And it probably is.

Rick Kittles' project has caught the attention of African-Americans eager to understand family origins obscured by enslavement and deracination. But some scientists, including some of his former colleagues, are skeptical. They say it's premature to use blood samples to trace African roots, and outrageous to charge hundreds of dollars a pop, as Kittles plans to do.

"That's like charging Holocaust victims to confirm their relatives were in fact gassed," says Fatimah Jackson, a genetics-trained anthropologist at the University of Maryland. "There are certain things you don't charge people for. We're talking about American slavery, forced migration, prisoners of war. I don't think you ask the descendant community to pay to find out something that's their God-given right."

Kittles' service is part of a technological trend fueling the American obsession with genealogy, as people increasingly find kinship through computers. His plan has special resonance in that it deals with a population whose past was intentionally obliterated. And it has provoked anger, in part because it grew out of a well-respected project to study the dawn of the African-American experience.

Kittles worked two years on the African Burial Ground Project, an effort to reconstruct the lives of 408 early African-Americans whose remains were unearthed in 1991 from an 18th century graveyard in New York. Led by Michael Blakey, a professor of anthropology at Howard, a historically black university in Washington, D.C., the project has been fleshing out the bones with stories. Anthropologists linked some of the caskets to ancient African rituals. Forensic specialists translated the rough etching of bones into tales of hunger and harsh labor.

But it was the recovery of DNA from the remains that provided the most tantalizing clues to the origins of the skeletons. Blakey's team began gathering DNA samples from living Africans, and found matches in the DNA of some 300-year-old skeletons.

It dawned on Blakey and his colleagues that DNA technology held the prospect of something even bigger. Someday, they believed, their genetic database could serve as a Rosetta stone for living African-Americans. Using the tools of molecular biology, the scientists theorized, a black woman living in an Upper West Side apartment could learn from her DNA about a hunter-gatherer ancestor in the highlands of Ghana. Or a plantation-owning ancestor from Surrey, England. Or both.

More than that, the burial project -- whose completion will require $5.9 million in promised but undelivered federal funds -- could help deflate racism in America by laying bare the extent of our interbreeding. It could underline a fact that has yet to seep into the national consciousness: DNA analysis has largely refuted the concept of race as a biological category.

However, many scientists felt it was premature to offer a DNA-linking service. For one thing, there are major gaps in scientific collections of DNA from the West and West Central African regions where most slaves were captured, and from the Native American tribes interwoven into the African-American tapestry. Second, Blakey and others believe, DNA evidence could offer only a fraction of the information a person would need to trace his or her origins.

"It's not like you can go into the lab, put in a sample and out pops the village you came from," Jackson says. "Origins are a very deep and very sensitive issue that has to be approached with care and caution and a high level of sophistication."

Kittles, who quit the burial project last year, denies he is rushing things and insists he is painstakingly filling out the database. But he hopes by early next year to begin offering DNA analyses that could point to the origins of any African-American who brings a blood sample to his lab.

Genealogist Dee Woodtor, author of the 1999 book "Finding a Place Called Home," said she expected that DNA analysis could help her clients reconstruct bits of their history, such as the African wars that may have led to the enslavement of ancestors.

Others have more modest goals. Melvin Collier, a Memphis civil engineer, believes that knowing a country of origin would enhance a sense of belonging during the trip to Africa he plans for 2002.

William T. Chapman, a Bonita, Calif., neurologist, came to genealogy out of a sense of loss after his mother's 1991 death. Playing around on the Internet, he found family roots in 19th century Virginia. He wants to push back further, though he's well aware that the connection is tenuous given the vast cultural gap that separates him from Africa.

"I know that if I go to, say, Cameroon, I'm not going to have anything in common with those people," Chapman says. "I don't think I'm going to have a spiritual event. I don't know -- I'm just curious."

"The meaning of finding one's origins is peculiar to each individual," says
Blakey. "For African-Americans the question of origins has a particular
value because during slavery, our knowledge of our lineage was deliberately destroyed in large part."

Blakey and Jackson say Kittles must take pains not to offer genetic
information out of context. Jackson is particularly displeased by the fact
that Kittles, who reportedly has backing from private investors,
plans to charge fees.

Newspaper reports have said he would charge $300, but Kittles told a Chicago radio station Monday the costs would be higher. Jackson scoffs: "Three hundred dollars buys you the sequence of one stretch of DNA." That's about as meaningful as reading only three pages of "War and Peace."

"That's fine if somebody thinks they're Yoruba and you match them
with Yoruba," Jackson says. "What happens if they don't match up with any of your samples?"

The sole purpose for charging a fee, Kittles said through a Howard University spokeswoman, "would be to cover costs, to conduct further research and protect the integrity of the work and the proper use of the data -- apparently the exact issues about which Dr. Blakey and others seem to be concerned."

Kittles is well aware that his results would offer limited information about one's past. But, the spokeswoman added, "even a hint of their African roots is more than most African-Americans have ever hoped for."

The technology employed by Kittles, amped up by supercomputers in the past few years, can compare stretches of DNA from sites on the Y chromosome and on mitochondrial DNA.

The Y chromosome is passed down by fathers; Y-chromosome tests were used to support the belief that Thomas Jefferson fathered Sally Hemings' child. Some of Kittles' published work involves Y-chromosome inquiries into the history of Finland.

Mitochondrial DNA is inherited from the mother. Mutations show a person's "age" relative to "Eve," theorized to be our common African mother who lived 200,000 years ago. Arizona University professor Michael Hammer used tests of this sort to confirm the Jewish "ethnicity" of the Lemba, a southern African people linked by oral history to one of the lost tribes of Israel.

For some people, such as New York writer Pearl Duncan, DNA
seems to offer confirmation of links suggested by language, culture and history.

Duncan was born in the Blue Mountains of Jamaica, where her parents lived on a farm established by rebellious slaves in the 18th century.

A Smithsonian Institution anthropologist told Duncan that some of the odd
phrases she'd learned from her parents were Twee language. That brought her to a region of Ghana. DNA tests, conducted with Hammer's assistance, confirmed these were her people.

But Duncan, who is seeking a publisher for a book she has written about her quest, seems to have a straightforward pedigree. That's not the story for many American blacks.

Even if Kittles' tests enabled these African-Americans to identify
where one male and one female ancestor came from, what would that reveal about the family tree?

"What people forget is that everyone has two parents and four grandparents and the number of family lines doubles with each generation," says Tony Burroughs, a Chicago genealogist. "I've traced my genealogy back seven generations to my fourth great-grandfather, born in 1781. There are 64 family lines back then and we're still in America. I could have relatives all over Africa as well as South America, Europe and Native Americans."

Kittles' project is, of course, part of a larger social phenomenon, a
genealogical craze driven by equal parts Internet and genome project, with a smattering of social disintegration thrown in. Scientists in England have begun offering similar services, including one that offers to
link people, via mitochondrial DNA, to one of 12 offspring of the original
Eve.

"There are lots of people interested in constructing for themselves some
sort of genealogical lineage. What the hell it's going to do for them I don't
know," says Clay Dillingham of the Institute of Genetics
Education in Santa Fe, N.M. "They're looking for a sense of belonging and family and these
companies offer it to you -- even if it's with your australopithecine
grandmother."

Some cultural anthropologists are even more dismissive of the genetic
approach.

"Culture is not genetically coded," says Richard Wilk, an Indiana University
professor who has worked for years with Maya Indians in Belize.
In Rwanda, he notes, it was only during the colonial era that the Hutus and
Tutsis developed the ironclad sense of difference that contributed to the
slaughter of 2 million people a few years ago.

"The example of Rwanda shows you that in 50 to 60 years' time a program of racism and genetic determinism can actually lead to people believing that they are separate and genetically distinct," he says.

And then, he says, there's the "Shirley MacLaine syndrome. Everyone wants to find the king in their ancestry, or the big chief. There's a market for
this -- especially among people who want to fill a void that can't be filled
for lack of historical records."

But Sam Ford, a Washington television reporter who happened upon Kittles last September while doing a first-person "Roots" investigation, felt that any
specific African identity was better than none. When Kittles tested Ford's
Y-chromosome, he turned up "hits" in Ibaden, Nigeria.

"OK," Ford acknowledges, "so maybe the Nigerian samples were from people who really came from Ghana. And it's only one branch of my family. But I'm looking for something that gives me some idea of where I come, any idea. This research has a scientific basis. I can't think of anything better.