Nicholas Hytner, director of "The Madness of King George," takes a mild-mannered genre picture and turns it into a rare entertainment. 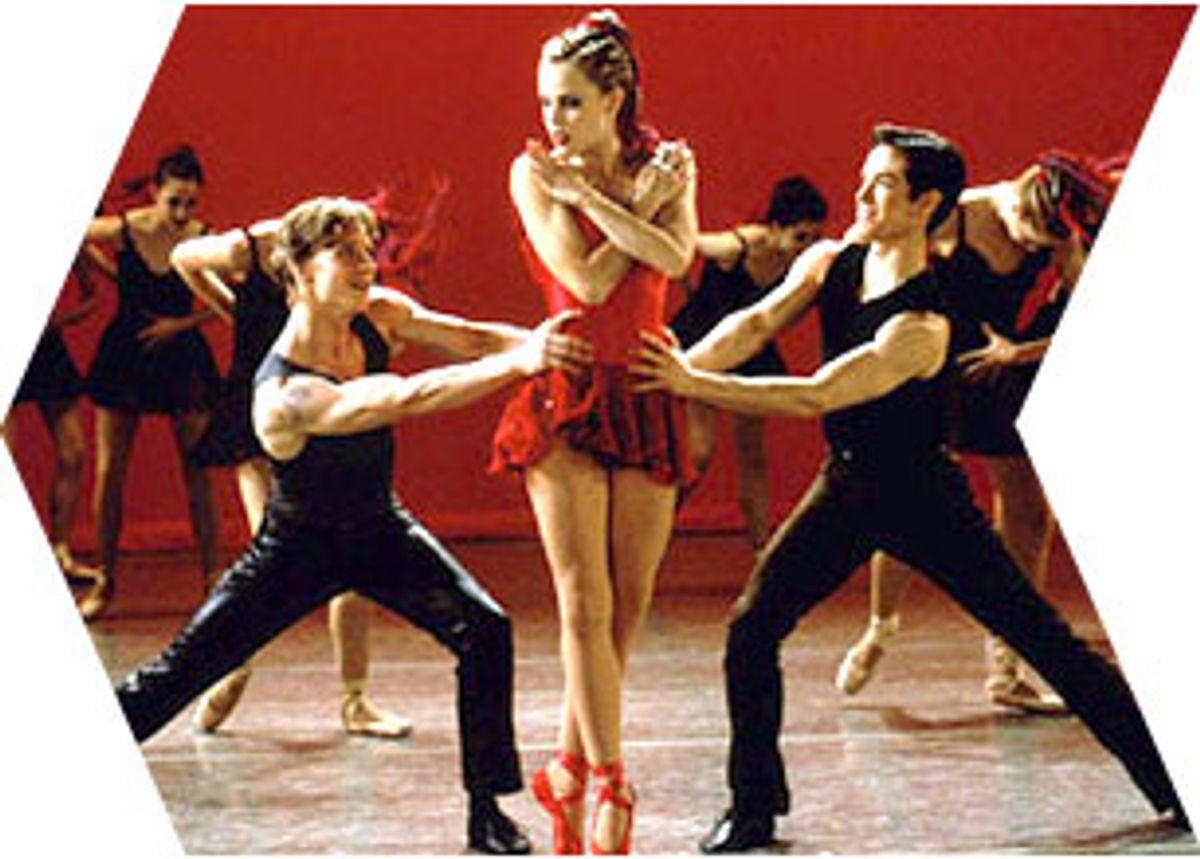 You look at the trailer for "Center Stage" and feel certain you've seen it all before: A young dancer gets admitted to a prestigious ballet school in New York and gets her shot at the big time.

Of course you've seen it all before -- that's precisely the point. "Center Stage" is grand, juicy fun regardless, tapping as it does into some archetypal pleasure center. There must some toeshoe-shaped segment of the brain that can't help responding to the sight of willowy youngsters with perfect carriage striding purposefully toward Lincoln Center, leotards and big dreams tucked away in their knapsacks.

I surrendered to "Center Stage" in its first 10 minutes as I watched the flaxen-haired, pouty-cheeked Jody (Amanda Schull), giving her all during a crucial audition for a prestigious New York ballet academy. When she learns she has been admitted to the academy, which gives her a shot at getting into a major dance company, her parents -- whose sensible hairdos signal a well-meaning but annoying cluelessness -- remind her that dancing in a major company isn't everything and that she can always go to college. Boo! Hiss! Jody, wisely, throws a minitantrum, telling her folks that she needs to take a shot at her dream, whether she succeeds or not, and off she goes.

The minute she's let off at the curb of her dorm, she's greeted by none other than star dancer Cooper Nielsen (Ethan Stiefel), who's studly in a pixielike way. He gazes meltingly at young Jody, offering to help her with her bags. She refuses, but she's thrilled nonetheless. It turns out that Cooper has recently been jilted by his longtime girl, the principal ballerina at that ultraprestigious dance company, who has run off and married the company's director, Jonathan (Peter Gallagher). Cooper's a loose cannon in the love department. Will the innocent but frankly ambitious Jody have the means to resist him? And what role will terrific dancer and awfully nice guy Charlie (Sascha Radetsky) end up playing in her life?

In case that setup isn't scrumptious enough for you, there's more. Jody ends up having a tough time of it in the program, realizing that she's not nearly as good a dancer as some of her peers, including the snooty Maureen (Susan May Pratt) and the breezy, rebellious Eva (Zoe Saldana). Her teacher, persnickety Juliette (Donna Murphy), repeatedly tsk-tsks over her turnout with a pained expression. Things don't look good for our poor Jody. But if I tell you that a triumphal performance turns things around for her, I'm sure to get letters berating me for giving too much away, so I'll keep my mouth shut.

It doesn't really matter much, though, because the pleasure of Nicholas Hytner's movie is delivered in its details -- and, of course, in its dancing. There are people likely to mutter about how tragic it is that a director with Hytner's "credentials" -- he was a celebrated stage director in Great Britain before launching his motion-picture career with "The Madness of King George" in 1994 -- would stoop so low as to take on a mild-mannered genre picture like "Center Stage."

But "Center Stage" is actually a pretty rare entertainment: It's casual and sweet spirited, but you also get plenty of glimpses of intelligence at its core. Hytner and screenwriter Carol Heikkinen dip right into the world not just of young dancers but of young people, with a minimum of condescension.

You couldn't make a remotely realistic picture about young ballet dancers without addressing the issue of eating disorders, and if Hytner underscores the problem a little too heavily at times, his touch is delicate where it really counts. When the haughty Maureen finally agrees to go out with the young premed student who's smitten with her, we see her on a group bowling date with him and a bunch of his friends. Maureen is so focused on her dancing that she's socially very awkward; at first, she doesn't know how to react when one of the kids tells an off-color joke about a mouse and an elephant.

But she finally gives in, and Hytner's camera shows us a number of subtle details in one slow pan: the faces of the kids enjoying the joke, Maureen's face as she finally decides to let go, the slice of uneaten pizza on the table in front of her and, finally, the way she picks it up, obviously after a great deal of deliberation, and takes a big bite out of it, laughing. Later, she'll purge herself of it. But Hytner doesn't overplay this particular moment. Instead, he draws out an enormous amount of sympathy for a character we thought surely we'd been signaled to hate.

You have to have stereotypes in a picture about the dance world -- for instance, the aging dance teacher who lets her long hair trail down her shoulders for street wear but whose imperious carriage and artfully draped pashmina still indicate to the world her status as "dancer." If you chucked out the stereotypes, you'd miss out on half the fun: Performers' egos are sometimes among the most fascinating things about them, and Hytner is happy to ride that wave.

But he also gives his characters enough contours to keep us happily engaged for a few hours. Gallagher is perfectly cast as one of those eminently dislikable dance world types -- he's like a giant, pulsating ego with legs and a 5 o'clock shadow stuck on for good measure, but even he's able to acknowledge his limitations. And Murphy, as the tough teacher, shows both glittering coldness and unsuppressed warmth without making the two seem at odds with each other. It's clear she's the kind of teacher who'll do anything to save her less-talented charges from becoming victims of their dreams, recognizing that supportiveness isn't always kindness.

And, of course, there's lots of dancing in "Center Stage," although the picture's set dance pieces aren't necessarily its best moments. (The rather garish finale is thrilling for its cheese factor, if nothing else.) The scenes in which we watch the dancers rehearse, or go about their routines in class, are the most satisfying by far. When Jody, frustrated with ballet, takes a jazz class for fun, a new world opens up for her, and you can see why: The teacher separates the male and female students so that each group is dancing to show off for the other, and their leaps and twirls bring to mind the Technicolor courtship from "Seven Brides for Seven Brothers" -- it's ridiculous good fun.

Most of all, though, Hytner has a feel for the performers' insular world, and he opens it up to the rest of us. There's a montage of the young dancers customizing their toeshoes on the first day of class: They're like an orchestra of willful, primitive percussionists, making a ruckus as they pound those little satin-wrapped blocks of wood against the floor. One girl scrapes the soles of her shoes with some kind of serrated instrument; another peels back the satin to singe the hard toe with a lighter.

But there's no image that better shows both the tenacity and the delicacy that are needed to make it in the dance world than Hytner's shot of sassy ballerina Eva, just after she has been kicked out of class for being a wiseass. Still wearing her toeshoes, she lounges outside Lincoln Center, having a smoke. Sullenly, she tosses the cigarette away, stretches out one spiderlike leg and stubs out the butt with the tip of her perfectly arched pink-satined foot. It's a graceful and economical gesture that encapsulates what it means to be a young, aspiring performer: All the world's a stage. And sometimes it's an ashtray, too.