To have an impact on the next election, gun-control advocates need to take a few reality checks. 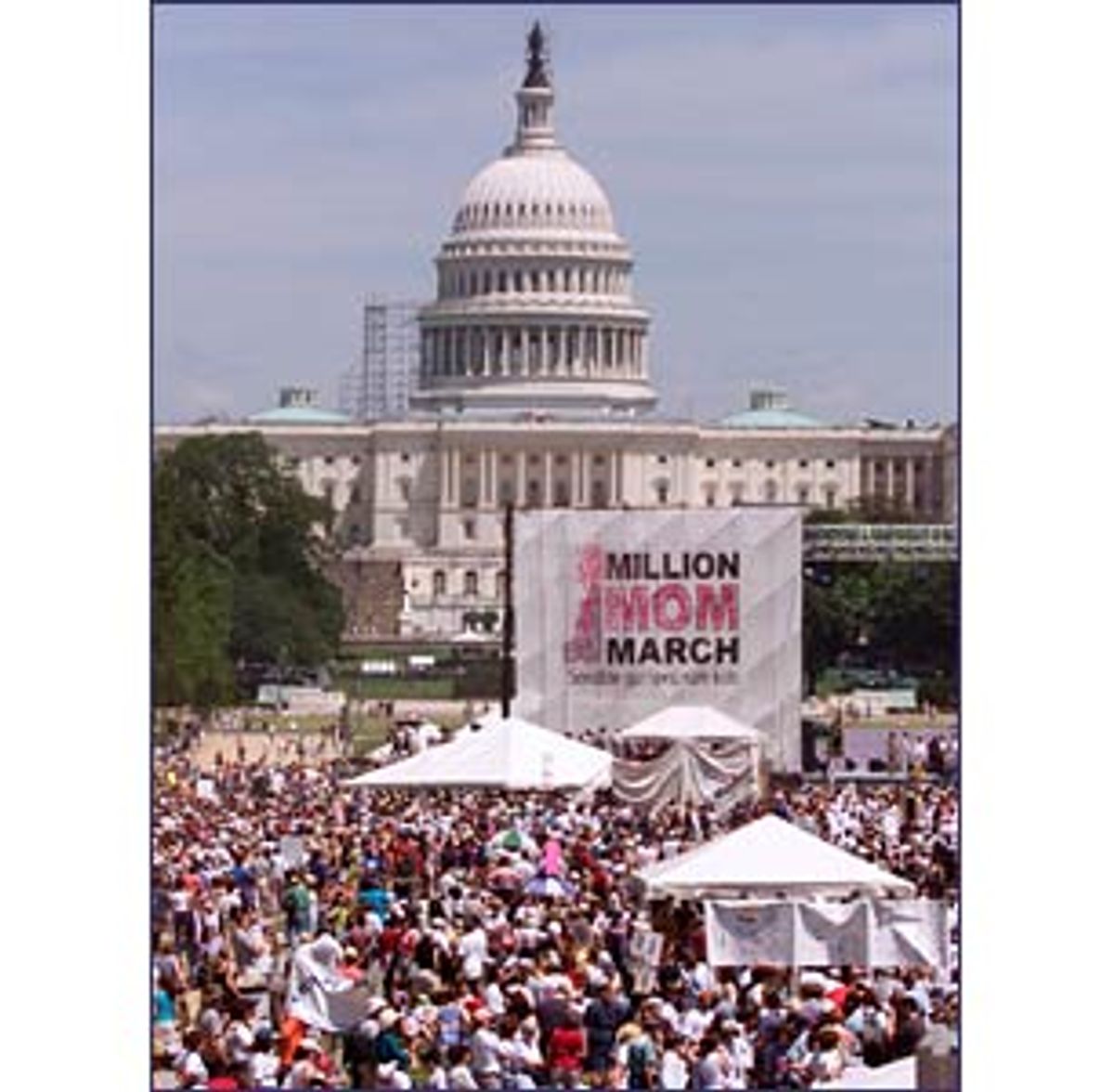 They might not have hit the million mark, but the hundreds of thousands of demonstrators who showed up in Washington for the Mothers Day gun-control march were impressive by any historical or political standard. In decades of pushing and pulling between gun-controllers and gun-promoters, there has been nothing like this event. It was possible, for a day, to feel that everything had changed, that gun control's political moment had arrived.

And some things really have changed. Just a few years ago, the only time television news cameras would focus on crime victims was when they were screaming for blood. Sunday's rally provided the first large-scale national platform for a new generation of victim-activists: a parade of eloquent and anguished gun-violence survivors who want to direct their grief somewhere besides vengeance.

"Mothers, we have shed tears for our children," Patricia Anderson of Albuquerque, N.M., whose son was a victim of gun violence and survived, told the crowd. "Let's make our tears a raging river of votes to get our legislators out of office if they do not want stricter gun controls."

Rosie O'Donnell and Hillary Rodham Clinton were celebrity headliners, but there was more on display at the Million Mom March than just smart showmanship by the rally's supporters in the entertainment industry. The march reflected a fundamental change in the politics of crime. Ever since the early '80s, when shrewd tacticians in the Reagan administration courted the nascent crime-victim advocacy movement, "victim rights" has been synonymous with a politics of punishment: three-strikes laws, executions and mandatory minimum sentences have ruled the day. The NRA understands the power of the approach, has counted on it, and on Sunday used its counter-rally to raise the specter of "predatory criminals."

But on Sunday, a new kind of survivor voice could be heard, a smart and eloquent call that seeks to redefine the gun debate. Credit for inspiring this voice goes to two of the women who led Sunday's rally: Sarah Brady, wife of former Reagan press secretary Jim Brady, and Rep. Carolyn McCarthy, D-N.Y. Brady and McCarthy are in some sense archetypes for Sunday's Million Mom marchers. Both were moderate, suburban Republicans transformed by their households' encounters with guns: Sarah Brady by her husband's near-fatal shooting in John Hinckley's assassination attempt on Ronald Reagan; Carolyn McCarthy by the death of her husband and the crippling of her son by Long Island Railroad shooter Colin Ferguson.

For them -- as for many of the speakers on Sunday's platform -- a firsthand encounter with gun violence didn't just lead to grief and rage but became the doorway into broad political engagement.

McCarthy vowed that Sunday's rally "is not where it ends." She told the marchers that after Mother's Day, "You're going to talk to your legislators and you're going to stand up for the rights ... that make this country safer for all of us."

But if McCarthy, Brady and those marchers truly want Sunday to be the kickoff for a Million Mom Movement, several reality checks are in order:

Reality check No. 1: Even as Million Mom March organizers were planning and then celebrating their day in the May sun, legislators in their home states were busy shoving even-minimal gun regulation into the darkest backrooms they could find. As pointed out in a startling report just released by the Open Society Institute's Center on Crime, Communities and Culture, no license or registration is required to own a gun in 35 states; 43 states require no permit for assault weapons; and in 18 states, kids can buy rifles and shotguns before they can drive or vote.

Reality check No. 2: The gun industry is betting everything -- lock, stock and barrel, as it were -- on the election of George W. Bush. "The industry is looking toward the election as a watershed event on this issue," says Bob Delfay of the American Shooting Sports Council, the gun corporations' trade association. "If Bush wins, we could be going in a whole new direction."

Delfay hopes Bush will push a national version of the law he signed in Texas that prohibits municipal handgun liability cases. An identical measure recently was signed into law by Gov. Tom Ridge of Pennsylvania, a leading prospect for the GOP vice-presidential nomination.

Reality check No. 3: The National Rifle Association's PAC and lobbying operation have between them raised over $30 million for the coming year's elections and legislative battles. While to many Americans the NRA seems increasingly marginal and crazy -- remember when Charlton Heston declared that posting the Ten Commandments at Columbine High would have prevented the killings there? -- the group still commands 22 million members and a grass-roots lobbying operation that is the envy of issues activists everywhere, right or left.

Sunday's march also comes at a strategically sensitive moment in the gun-control movement. Right now, gun-control advocates enjoy a strategic alliance with the Democratic Party and the Clinton administration. In fact, over the next few weeks, Democratic senators plan to link gun-control amendments to a Senate education bill.

But those amendments are largely symbolic. Democrats such as President Clinton and Vice President Al Gore have spent the last 20 years courting rural, conservative male votes. They want quick, symbolic victories over the easy-to-demonize NRA, but they stop short of the kind of substantive measures needed to halt the flow of guns into America's cities, where most gun victimization still occurs.

Case in point: the agreement negotiated last month by the administration between Smith and Wesson and some of the 30 local governments suing gun makers for the health-and-safety damage caused by their products. On the surface a dramatic development, that settlement required little of Smith and Wesson beyond a handful of safety measures it already employs, and did nothing to force accountability for the distribution of guns into irresponsible channels.

Indeed, for all the discussion of locks, background checks and other hot-button safety issues, the real burden of gun violence -- and therefore the real challenge for a Million Mom gun-control movement -- comes from those distribution channels and the corporations that benefit from them. As a jury decided in Brooklyn last year, gun makers knowingly target the 35 states with the weakest firearms laws for a massive oversupply of weapons -- for gun sales far beyond what their local markets can absorb.

At the same time, nearly half of all federal firearms licenses are held by so-called kitchen-table dealers -- individuals who sell weapons out of the back of a truck or out of their homes. It is a system without the faintest hope of effective regulation. Until the industry is held financially accountable for weapons distribution, there will be little incentive to change -- which is why, in the short run, those 30 lawsuits remain key.

The Million Mom March was an event full of promise. But as Rep. McCarthy hinted, a march is not a movement, and a day's media event is not the same as political fisticuffs in the backrooms of legislatures. The gun control movement has always been hampered by the perception that it is too nice, and too moralistic -- sort of a politically correct version of the old temperance crusades.

But with the NRA trafficking in public fear and distortion, nice is definitely a problem. So is moralism if it allows gun control to be seen as an elitist attack on sport-gun consumers rather than a populist crusade against predatory corporations.

That hundreds of thousands of people felt motivated to march on Washington gives reason to hope for a turning point in the politics of guns, and by extension in the broader discussion of how to make America a safe society. But if the Million Mom March is to become a Million Mom Movement, it is time to put away the soccer gear and suit up for some hardball.